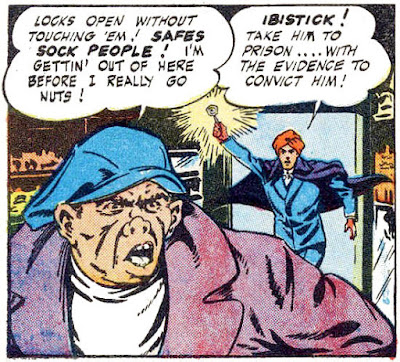 If you can suspend disbelief long enough to accept Ibis, an Egyptian prince, brought back to life after 4000 years with his lover, Taia, you can accept a tale that begins in Fairyland, presided over by King Oberon, and disrupted by a mischievous “genii,” Zurty. Zurty is banned, and crosses paths with Taia and Ibis. Oh yeah, I forgot. You have to suspend more disbelief that Ibis has a magic “Ibistick” that he can wag and perform miracles, like turning a car into rubber, or give a safe arms to defend itself.

Artwork is credited to Gus Ricca by the Grand Comics Database, who also credit Bill Woolfolk with the script. 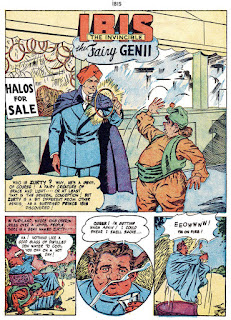 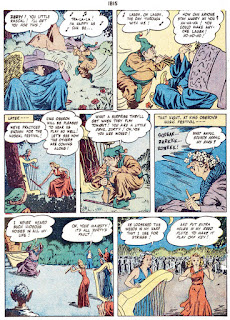 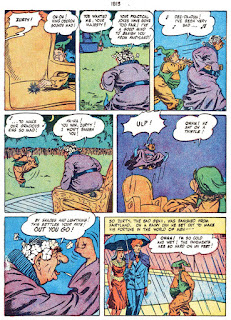 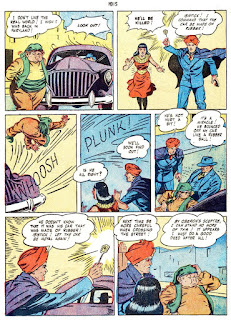 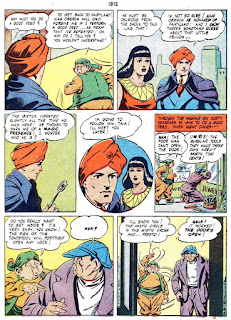 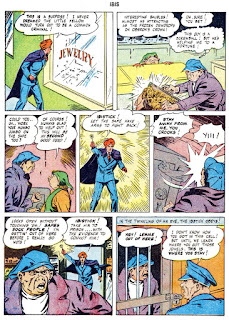 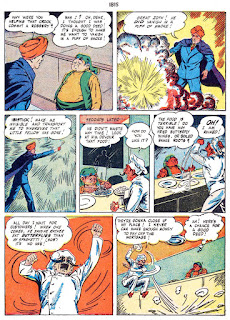 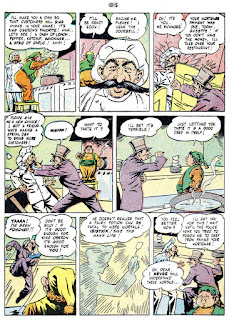 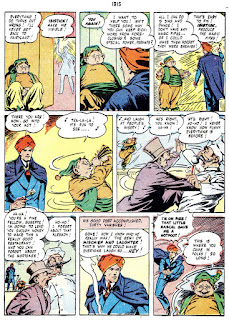 Mostly, I enjoy stories of Ibis if Taia appears and is well drawn. Here, she is very well drawn, but doesn't make much of an appearance.

Of course, instead of socking Zurty, Ibis could have commanded “Ibistick! Give Zurty a clue!” The problem with most or all Ibis stories is the same that, synchronistically, I associate with I Dream of Jeannie (as I have mentioned in one or more previous comments) — a character has so much power that only a clever and motivated writer could produce a story in which he or she is truly challenged, unless that character and his or her associates are made rather stupid.

The term “genii” is a plural of “genie”, by way of the Latin “genius”, from the Arabic “الجني” (“[d]jinni”), whose plural is “الجن” (“[d]jinn”). In Islam mythology, the الجن are creatures with free will, and the evil الجن have a rôle roughly equivalent to that of the fallen angels in Christian mythology (though, in the Islamic system, angels are distinct from الجن). It isn't clear how الجن were viewed in pre-Islamic Arab mythology.

My second girl-friend, her sister, and her mother (all Iraqi) believed in الجن but seemed only to refer to the wicked الجن.

Nice art. I love how Taia thought Zurty must've been looney to talk about being from Fairyland. This from a 4,000-year-old Egyptian princess. However, the Ibistick is just too damn powerful. How did Ibis ever last so long?

It's a sweet little story, but a bit predictable. The art is always pretty good on these. That said, Ibis didn't already notice something weird about Zurty without his ... ugh, "magic stick vibrating," call Dr. Werthan! Zurty was dressed like he came from Fairyland! Then I realized that Ibis hangs out with a woman dressed like an Egyptian princess, so he might not notice stuff like that.

Speaking of Taia, she gets the real shove-off in this issue. No longer it didn't last much longer; ditching the only attractive character out of the story? :)

BTW, getting hit by a speeding rubber car would kill you, too. Why the obtuse use of godlike power? "Zurty is no longer in path of car" would suffice!

The artwork in this Ibis yarn impresses me, Pappy. Mr. Ibis and Taia certainly wear stylish outfits. That swami headgear gets plenty of use in magician comics —right up their with a top hat. The landlord and the spaghetti chef look like relatives of mine. But most astounding of all, that burglar is a spitting image of me! I sure wish I had that burglar's fashion sense. Great hat. No magician would wear it —even though it could hide a bunny, too… All this makes me wish for a comic that features a magicians' convention: Mandrake, Doc Strange, Ibis, Yarko, Magicia de Spell, Dr. Voodoo, Xaltotun, Dr. Seuss… you know the gang. A real festive idea. Hmm. I might just be the huckleberry to draw that…
Seasonally busy of late, I've been reading your posts days late but enjoying them, Pappy. We appreciate you.

7f7, your idea for a magician's convention makes me think of Mad and "Manduck the Magician", with magicians zapping each other.

I appreciate you, too! Thanks for that assurance.

It does bring to mind a question I have had lately...where my missing followers went. The other night I signed off after working on my blog and had 699 followers. The following morning I had 683. Did a gaggle of readers suddenly get disgusted with me and quit, or is it some sort of Google thing, and people have signed out of the service? I hope it is the latter rather than the former.

Very nice story, and lovely art. Mr. Ricca could have been a wonderful illustrator for fairy tales books (I wonder if he tried).
I guess if you drop your google account, you also lose your blogger profile... maybe.
But how come sixteen of your followers decided to drop at the same time? Makes no sense. Besides, why leave such a great blog? Maybe it's some kind of malfunctioning, or Zurty's work.

Ibistick! Let the italian name "Giuseppe" no longer be misspelled into "Guiseppe" in American comics.

Brian, the visuals overruled common sense (or as common sense as one can get when a plot device depends on a magic wand), when the author thought it would be more fun to show Zurty bouncing off a car than having the car avoid him.

Extending that, the driver could have thought, "My car is made of rubber! Think I'll slam it into a tree and bounce right off!" only to end up impaled by his steering wheel and wrapped in a twisted ton of steel.

J D, whatever the reason, for a couple of days I had 700 followers, then dropped to 699 for a few weeks, and now a double digit loss. Kind of like watching the stock market go down.

I like the new picture. I think it looks like a young Steve Railsback, an actor who once played Charles Manson (Helter Skelter, 1976). That doesn't mean I think you look like Charles Manson, just that you look like the guy who played him. Hope that makes sense, and that won't drop following Pappy's because of it.

Gee, Ryan, I kind of like Ibis, even though magicians in comics usually make me go cold. Somebody must have liked him at Fawcett, too. He didn't keep his own book for long, but he was in Whiz Comics long after the book was canceled.

Thanks for the link to Manduck the Magician by Kurtzman and Elder. Satisfying, yeah!

Alicia, Gus Ricca worked for the Harry "A" Chesler shop. I guess he snuck in some freelance jobs at Fawcett, too. He is probably best known for some weird and morbid covers he did for Chesler, including Punch Comics #9.

Twenty years after Fawcett shut down its comic book line to settle its suit with DC over the similarities between Captain Marvel and Superman, DC Comics licensed the original Captain Marvel from them. I have no idea how the business arrangement worked out, and it is my understanding DC later bought out the rights to Captain Marvel. I assume they also bought Fawcett's pantheon of superheroes, as they had done with Blackhawk and the Quality line in the 1950s.

Happy Christmas to you and yours, Alicia!

7f7, I quote this story when I eat something that is tasteless. I say, "Funny, this tastes like old cruddy, dried-out halavah!"

For the sake of this comment I looked up "halavah," because I did not know what it is. It is a candy made from sesame seeds. Unbeknownst to me, I have tasted halavah in my life, and it was rather good, not cruddy nor dried out.

Thanks Pappy, I remember Railsback in "Space Vampires".
Unfortunately, the new pic is not ME, just the same old lovable Kiel Martin, as Detective JD LaRue in "Hill Street Blues".
The character JD represents me well "in spirit".
Me, I got a beard like yours (more or less), but sadly much less hair.
Charles Manson was not an ugly man himself, was ugly "inside" but that's another matter entirely.