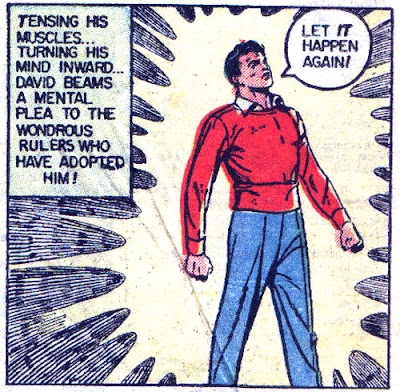 Nature Boy was a short-lived superhero, appearing in three issues of his own comic in 1956-57. He was created and written by Jerry Siegel, and the origin story issue was drawn by John Buscema.

David Chandler, aka Nature Boy, got his powers from some gods no one has ever heard of. Well, except for Neptune, but the rest of the pantheon was unknown before Siegel invented them. In the first issue we even see a god named “King Blasto, the monarch of explosives” (!) which, if nothing else, showed Siegel still had a sense of humor.

I’m showing the entire Nature Boy contents of the issue (there was also a Blue Beetle reprint, which I’m not showing). There is an odd two-page feature called Nature Man, which appears to be a grown-up Nature Boy. Nature Man did not appear any other time. Since Nature Boy’s creator was Jerry Siegel, my opinion is he included a short Nature Man feature in case Nature Boy became a success, so no one else could create a Nature Man to compete. It may seem far-fetched, but it happened to Siegel and his partner, Joe Shuster, when DC introduced Superboy, kicking off Siegel and Shuster’s long series of lawsuits against their publisher. 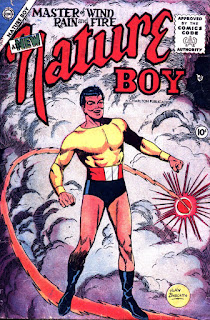 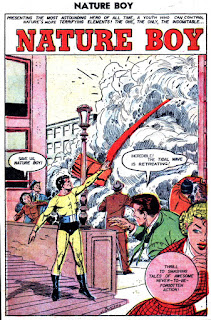 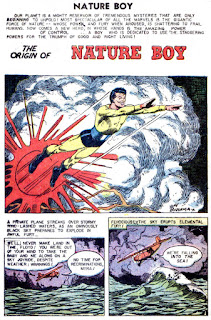 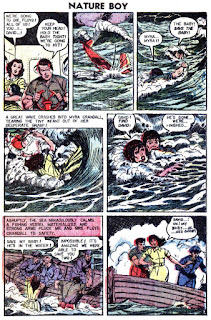 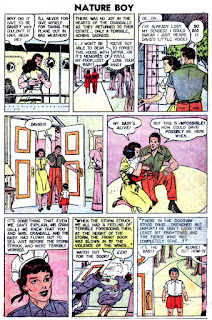 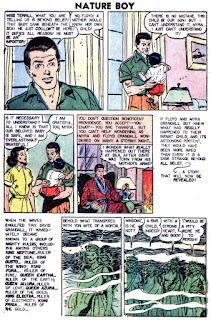 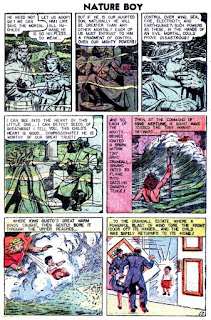 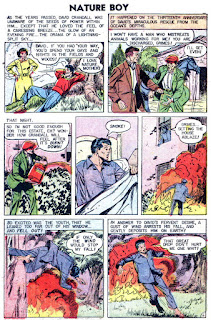 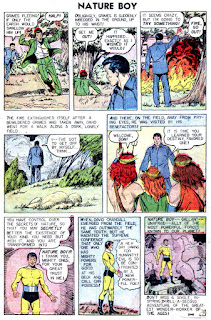 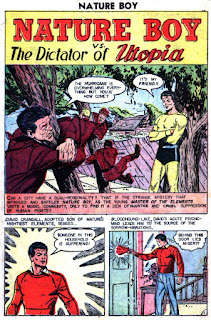 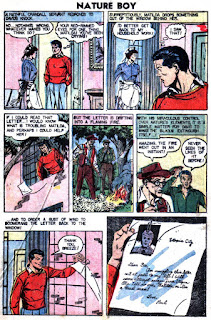 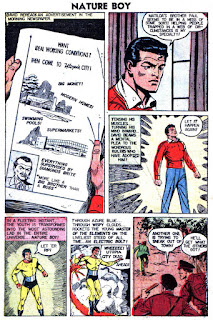 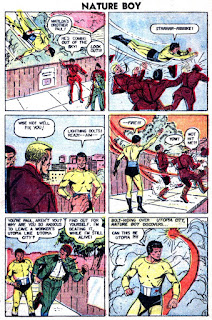 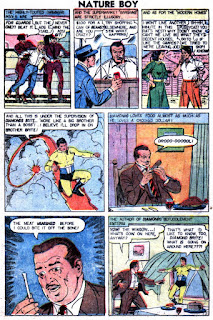 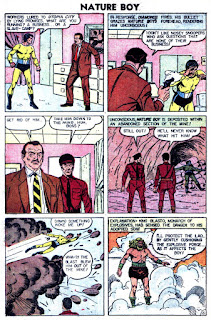 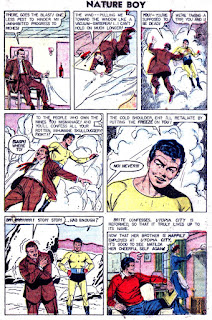 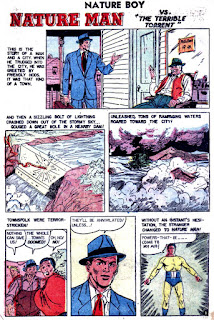 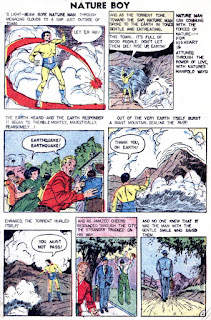 I believe Nature Boy was inspired  by the 1948 hit song by Nat King Cole, which was written by proto-hippie eden ahbez (spelled with no capitals). Read more about ahbez and see a video of the song in this post from Insomnia Notebook.

I looked at the guided lettering, and thought “Leroy”. But, since this was Charlton, maybe it was actually Wrico lettering. ;-)

Is seems from 5:2 that, endowed with a power from each of several mythological characters, David became the World's Mightiest Mortal. Now, there's an idea.

Perhaps Utopia City could live up to its promises, but I'm not aware of any scheme begun as a scam that could. In particular, there's been no planned city (honestly planned or otherwise) that has worked as advertised, and most never attain viability other than as parasitic capitals. (During my childhood, allegedly educational television talked-up Arcosanti, which is still out there, but scraping-by on donations, and paying most workers no more than minimum wage.) The idea that Utopia City could live up to its promises is in keeping with the technocratic fantasies of the first half of the Twentieth Century, which so informed the science fiction that Siegel and Shuster consumed and sought to create.

The origin story art is great, but it's Buscema so that's to be expected.

A lot of Shazam in this one, I guess it came full circle for Siegel! There's a good bit of indeterminate powers going on. Like you, I believe the "Nature Man" must have been preemptive, it's way to short and not fully formed to be anything but. And that makes sort of a really sad postscript on Siegel's life, always trying to recreate his triumph and never getting close but (with good reason) always seemingly paranoid about new creations. That is, of course, my read on the situation. Could have been completely different for Siegel.

That "droooo-ooool" panel needs to go up on Tumblr. I've been trying to put up pages from comic bloggers I like and linking back to help send you guys a little traffic.

nteresting. It's more or less Superman-Superboy.
Too bad it was not succesful, maybe Nature Boy was a character too much ahead of its time.
had he been conceived during the Bronze Age (of comics), he might have been very popular as the child who was adopted by the funkiest of supernatural Mighty Kings, the Earth Wind and Fire, who would have granted him power over the classical elements of nature, plus the Power of Groove, granted by the almighty King White himself one day in September. Of course he would have needed a black skin and an Afro hairdo.
Now if this comment isn't just plain stupid, I don't know what is.

About ten years earlier there was a Spirit story with a Nature Boy named Cromlech in which that song was quoted or sung.

Today is also Jack Cole's birthday, and while this has not a whole hell of a lot to do with your post, Cole once did a story satirizing the eden ahbez phenomenon (including his hit song) in a Midnight story published in Smash Comics #82. Just an fyi to a fellow comics aficionado.

That all said, it's great to see early Big John B. work!

Rath Raq, and thank you for the FYI. The song (and ahbez) were popular for a time, and then like most things, faded out. He never regained that "Nature Boy" glory, but in 1960 he did an album of exotic music which is on YouTube, and it isn't bad.

Russ, thanks for the note and the FYI for a Spirit story. I also remember that Carl Barks did a Donald Duck story with "nature boys."

Brian, I have found that links to Tumblr help me get traffic, so thanks ahead of time for whomever you send my way.

There is a story that Jerry Siegel's wife actually asked DC to hire Siegel as a writer, which is how he ended back at DC writing Superman. It must've been hard on his pride, but while I'm not certain he didn't do other things besides write comics, he didn't end up in a mailroom like Joe Shuster.

J D, ha-ha, took me a couple of readings of your note to get the Earth, Wind and Fire reference with "September." I like looking back at old '70s videos on YouTube of the soul acts with their big hair and flashy clothes. I wasn't into the sound then, but it has grown on me over time.

Daniel, what, there are no true Utopias? Damn, I feel disillusioned, but at least I haven't put money down on a condo in such a promised paradise.

I think this was imspired by Capt Marvel/Billery Batson more then any song, Pappity! He evan dresses like BB, same color scheme 2. Marvel Family went OOB in 1954, rite?

Alicia, there were a lot of heroes who owe more to Captain Marvel than any other character.

The song "Nature Boy" gained some popularity after being featured in the film "The Boy with Green Hair."
Eden ahbez released a CD in the '90s called "Echoes from Nature Boy" featuring that song and some newer compositions.