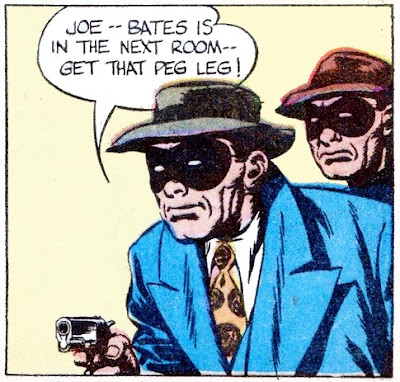 My brother-in-law, Jim, and I had a conversation several years ago. We had been watching some thirties gangster movies on video tape (that's how you know it was several years ago). The subject of the dialogue came up. Jim asked me, “Did people really talk like that in those days? Did they say, ‘all right, you muggs’?” I don’t know, I wasn’t there. But slang and colloquialisms change all the time, so in 1935 it could have been possible to walk past a street corner gathering of tough guys who were calling each other muggs...or worse.

That brings us to our entry today, one of the “Gang Busters” stories, this one from Popular Comics #139 (1947), and featuring masked gunmen. My question is, did any crooks actually commit crimes while wearing masks borrowed from the Beagle Boys? My opinion is that style of mask was more a symbol in fiction than a reality. Once again, I wasn’t there. The thugs trying to steal Peg Leg Bates’ peg leg full of opium wear those masks. Dialogue is fairly sparse in this story, but had there been more they might have called each other muggs, also.

One of them, captured by Inspector Stefan, says, “Ya got me, copper!” which is probably the least original line ever spoken by a crook. It leads to another question: in real life did captured criminals ever actually say to police, “Ya got me, copper”?

The mugg who drew this story is unidentified by the Grand Comics Database. 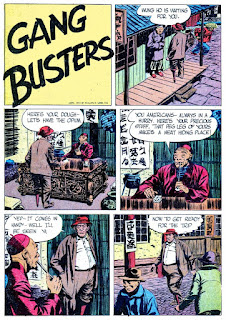 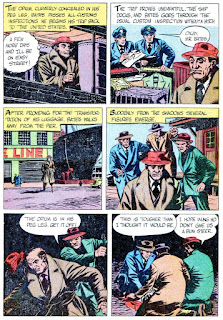 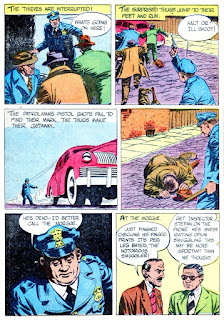 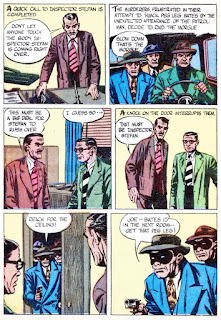 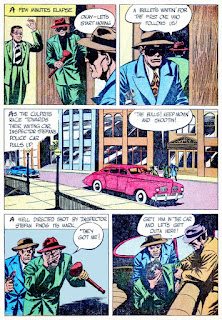 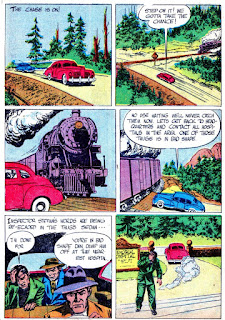 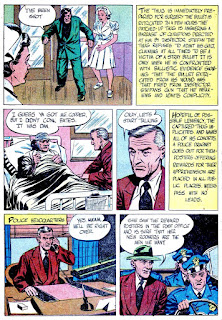 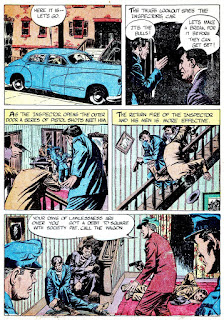 No matter the time or place, did anyone ever say "Your days of lawlessness are over"? How about "bum steer"? Anyway, that ending was too fast. No real buildup to a climax, no suspense. The conclusion was foregone. I know, I know: in fiction, "crime doesn't pay." But how about the suspension of disbelief, even for a page or two?

Ryan, oh sure...every time I'm busted by the law I am told, "Your days of lawlessness are over!" However, I have been able to continue my lawless ways. So I consider it an empty threat.

That is a lie, and I am giving you a bum steer.

(I have heard "bum steer" more than once, coming from me. It was usually in the pre-GPS days when I asked for directions to a destination.)

The mugg who did this story was cool cat, man. I dig his stuff.

I think Gangbusters was originally a radio show, created by the same Phillips Lord who did another great crime radio show called "Mr. District Attorney".
It looks like both the shows had their line of comics.
I stumbled into Mr D.A. two months ago, commenting on a blog that explore interaction between comics and justice.
For those who care, here's a couple of my notorious "JD's Links":

"Giustizia a strisce" ("Striped Justice", I guess) is a cool blog, devoted to the "legal" side of comic books and strips, in Europe and America. There are people who try to keep the flame alive...

By the way: Merry Christmas, Happy Hanukkah and great Yuletide to you, Pappy, and to Rummy Ryan, Dedicated Daniel, Amazing Alicia and all the other friends...

It used to be common practice to put faces on drinking mugs, and thence the use of “mug” for face. From there, “mug” came sometimes to be used for person. And so, yes, people called each other “mug”. I'd be very surprised if people weren't somewhere still doing that, in imitation of popular fiction.

I'm sure that “Ya got me, copper!” was at some point used by a real-life criminal in jocular imitating of fiction; whether it were otherwised used in real life, I wouldn't know.

The term “bum steer” is unsurprisingly a metaphor drawn from cattle ranching.

Possession of Beagle-Boy masks would be somewhat incriminating, whereäs having kerchiefs could seem less so.

I have yet to be told that my days of lawlessness are over. I assume that they are not.

Couple of spots in the art, I would swear it was Bill Ely.

That was a relatively static story for the crime comics of the day. As Ryan said, the ending seemed to appear out of nowhere. It feels like another comic that was written as they went and then they ran up against a page limit.

I like the art, it's amateurish in places but the dark shading gives the gangsters a mean look. Of course, nearly everybody was under the same shading and had a mean look in this comic.

Nobody thought to check peg legs, especially somebody who was known as a "notorious smuggler?"


Rath Raq, I thought at first it was Ely, but Ely was also known to sign his work, even later on at DC when no one was signing their art. So perhaps it was Ely working with someone else.

Brian, amazing how much contraband came into the country in unchecked peg legs.

I have no idea whether anyone checked someone's artifical limbs or not. Or maybe it would depend on whether they knew the person standing before the inspector had a peg leg. Are you going to ask everyone coming through customs, "Arrr, matey, wearin' some wood today, areya?"

Daniel, so would a "bum steer" be one that is sold without the new owner being told it is bad? I assume today bum steer means being given bad information, and led in the wrong direction.

Daniel, every time I make a trip to the Post Office I check to see if they have posted any wanted posters with your name and face. So far I haven't seen any.

Pappy, yes, the original bum steer was a lame steer, which would impair both its ability to sire offspring and to be driven to market; so to be sold a bum steer was to have paid for something that proved useless. Outside of the original use, I only hear and read it in reference to information, but I could imagine a more general use.

Thank you for checkin— wait … Are you doin' that as a friend, or lookin' to drop a dime on me? Ya better not, ya mug!

J. D., I thank you for your kind wishes!

It could be that criminals did talk like that in the early 1930s (I believe James Cagney said "Ya got me, copper" in a film from that period, possibly Public Enemy) but by the 1940s those phrases had become cliches. What crook's going to want to talk like a comic book character? The crooks also swore back in the day. Of course, you wouldn't have heard that in a movie, thanks to the Production Code, but it has been documented in comic strips of the era, such as Dict Tracy: "#%&*^(@(%#*@)" Actually, now that I think about it, that's from Moon Mullins.

Kirk, as an aside, I think Moon Mullins was a more realistic comic strip than Dick Tracy. Just an opinion, of course.

I also think it is more creative to think of ways to curse without swearing, but sadly, our "culture" has become very coarse with its use of profanity...freedom of speech, which I would not give up, but it does go overboard at times.

Hi Pappy. There was a one-legged tap dancer named Peg Leg Bates. He appeared on the Ed Sullivan Show. Here is his Wikipedia page:
https://en.wikipedia.org/wiki/Peg_Leg_Bates

No steer can sire offspring.