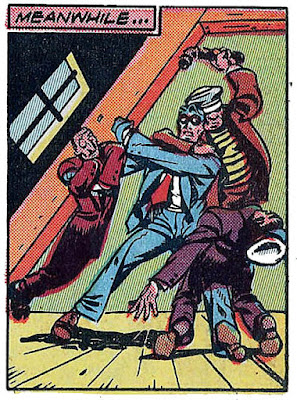 The Spirit is not the cleancut, Marquis of Queensberry Rules fighter he is often presented to be. In fact, he can get down and dirty when his opponents are down and dirty, as evidenced by his tactics during a fight with  “Alex the Bloody” on page 7. Despite the non-action splash panel, there are fisticuffs a'plenty in this particular episode, which I have scanned from Police Comics #34 (1944).

The story is from the Spirit Sunday Comic Book Supplement, originally published August 3, 1941, before Will Eisner entered the U.S. Army. The coloring on the reprint is credited by the Grand Comics Database to Joe Kubert. 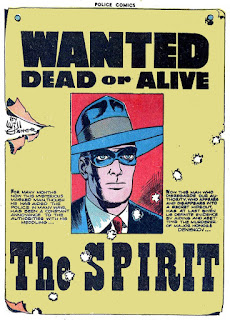 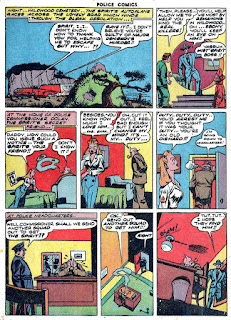 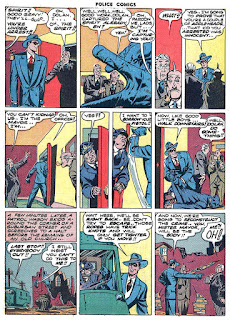 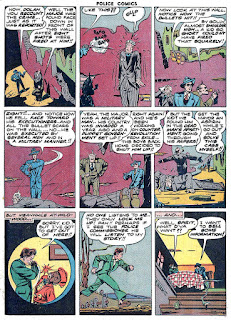 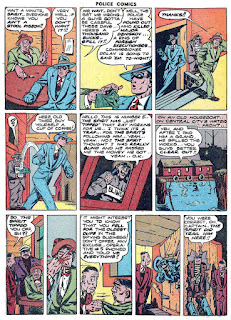 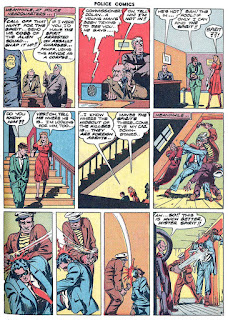 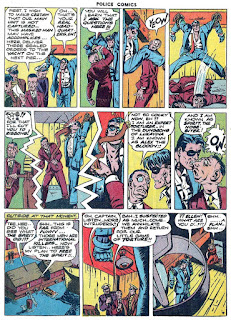 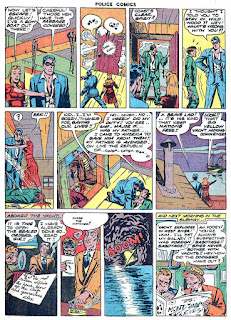 What I like in a Spirit story is that he's not the unbeatable crimefighter type, like the Phantom or the early Batman, he's a smart guy who takes his chances.
Sometimes victory has a high price, like in this case, sometimes there are even defeats. In other words, when I start reading the Phantom, I know how it ends, in a Spirit story you're never sure whether he'll pull through or not.
And his Autoplane is cool. I expected to see Dr. Einmug driving.

Various comic-book stories remind me of the radio programs of the same general era. This story particularly reminds me of the Boston Blackie series.

The Spirit doesn't merely act as a vigilante, but is so bold not merely as to help a suspect to escape but as to knock an officer unconscious and take him, the Commissioner, and the Mayor prisoner. Blackie more than once knocked-out a cop and more than once drew a gun on Inspector Faraday.

The suspect might as well have been left in police custody, and Dolan could have been peacefully persuaded to observe a ballastics demonstration with a mannikin. Likewise, a lot of the stunts that Blackie pulled, putting him in opposition to the police, were silly theatrics.

The story here isn't very strong. The Spirit indeed pulls an old trick, and he gets caught. The fellow who was previously a suspect happens to know by unrevealed means where to find him, shoots the Bad Guys, and is himself shot (apparently dying). Some remaining Bad Guys destroy themselves because they were ordered to so for some unrevealed reason.

Daniel, compare that attitude toward the police with today. No one, even the Spirit or Boston Blackie would pull a gun on a cop and get away with it now.

But that was the era of the dumb flatfoot in popular culture. Nowadays when I watch a movie featuring cops they are either near superhuman physically (and in their ability to dodge bullets), or completely corrupt. These sorts of stereotypes go in and out of fashion, and the Spirit story was right in the forties fashion.

J D, in the old days the heroes, like the Spirit and the Phantom, were invariably on the side of goodness and righteousness. No matter what happened to them they always survived. Considering how many times the Spirit got beat up by thugs, knocked on the head or even shot, it is a wonder he never succumbed to his wounds. That's what is great about fiction. Your hero doesn't have to die after facing deadly weapons wielded by men of evil intent.

No, the story wasn't very strong, but, when you're dealing with Eisner, the art and compositions can still make the strip worth reading, as in this case.

Dr. Einmug! I got that reference, JD!

Ryan, I agree...considering how many artists and comic creators have been inspired by Eisner in the past 70 years I would say his work is always worth seeing.

Who was Dr. Einmug (besides being a play on the name Einstein?) I remember Dr. Wonmug in Alley Oop.

Dr Einmug was the (german?) scientist created by Ted Osborne and Floyd Gottfredson for the Mickey story "Island in the Sky".
A funny fact: in Italy Einmug was adapted/translated into "Dr. Enigm". I think it's very clever, the scientist IS a mystery. The story's title was turned into "Topolino e il mistero dell'uomo nuvola" [Mickey Mouse and the mystery of the Cloud Man]]