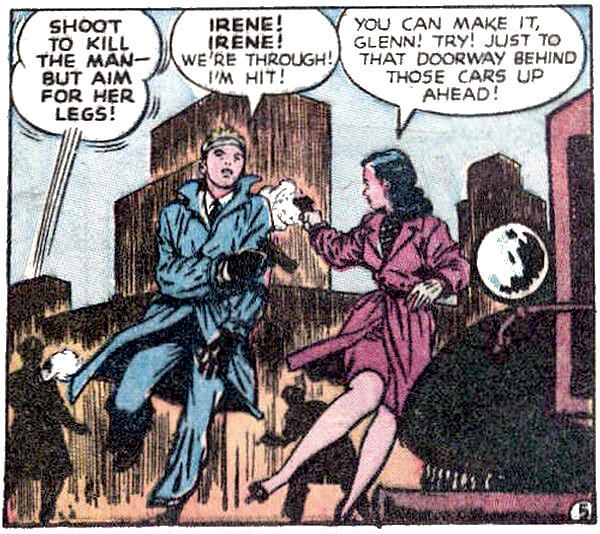 Irene Shrader  (sometimes spelled Schroeder), took up with Glenn Dague, who had left his wife and children for her. What interested me about the story is that a part of it (the part that got the pair the electric chair) took place near my son’s home in Western Pennsylvania. This article from The Lawrence County [PA] Memoirs is one of the better articles I’ve read about the pair.

There is a way crime comics presented women as criminals, which was to show them tougher than their men. The males were portrayed as being followers, even wimpy. The women robbed and killed without mercy and ordered their significant others to do the same. This version, drawn by George Tuska for Crime Does Not Pay #57 (1947) has a fairly standard panel-by-panel description of Shrader/Schroeder and Dague’s short but murderous career. Lots of tough dialogue and action to match. There is also Irene’s speech in the final panel where she says to Dague, “We were wrong in goin' bad, Glenn! It doesn’t pay!” Considering Irene’s psychopathy I doubt she ever expressed such a thought. Part of any psychopath’s mental make-up is to blame their victims rather than themselves.

Shrader/Schroeder has the dubious distinction of being the first woman executed by electric chair in Pennsylvania, and only the fourth woman in America executed by that method. 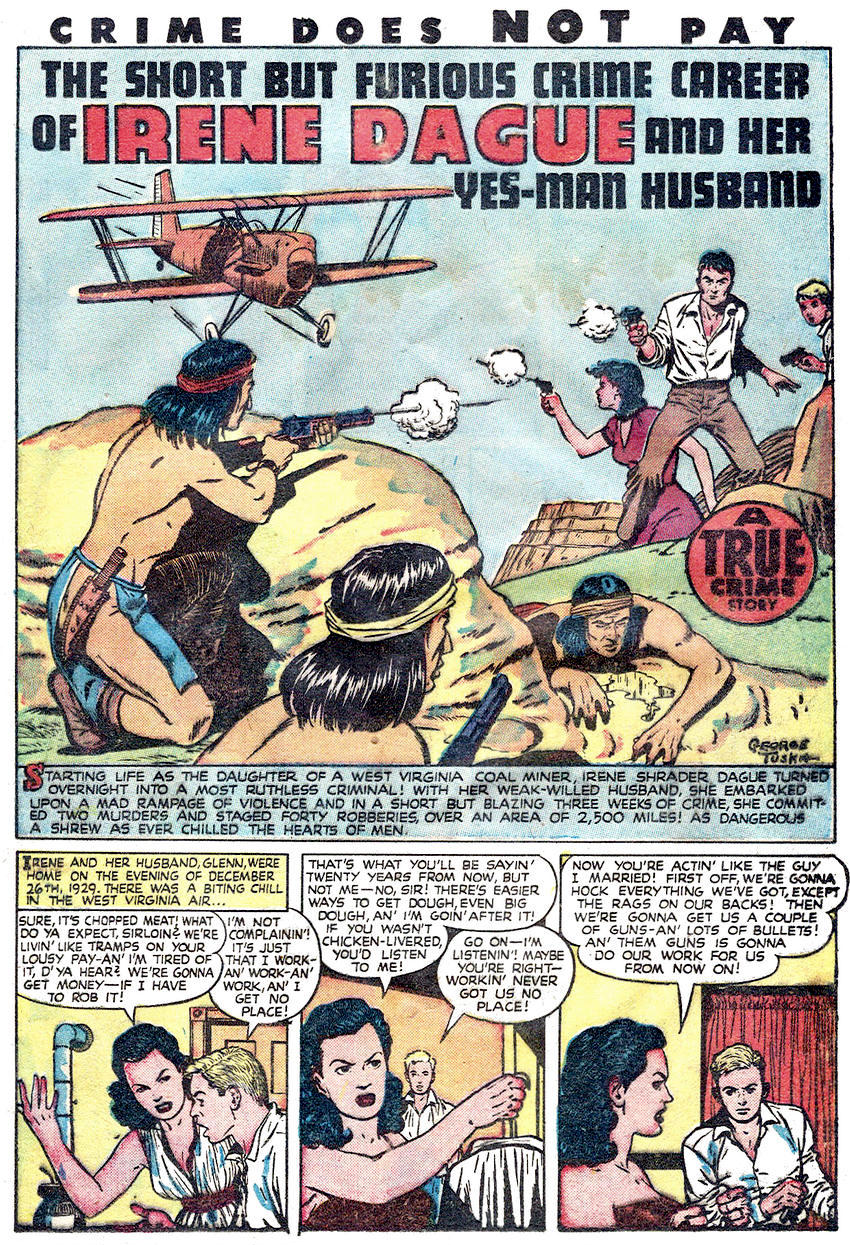 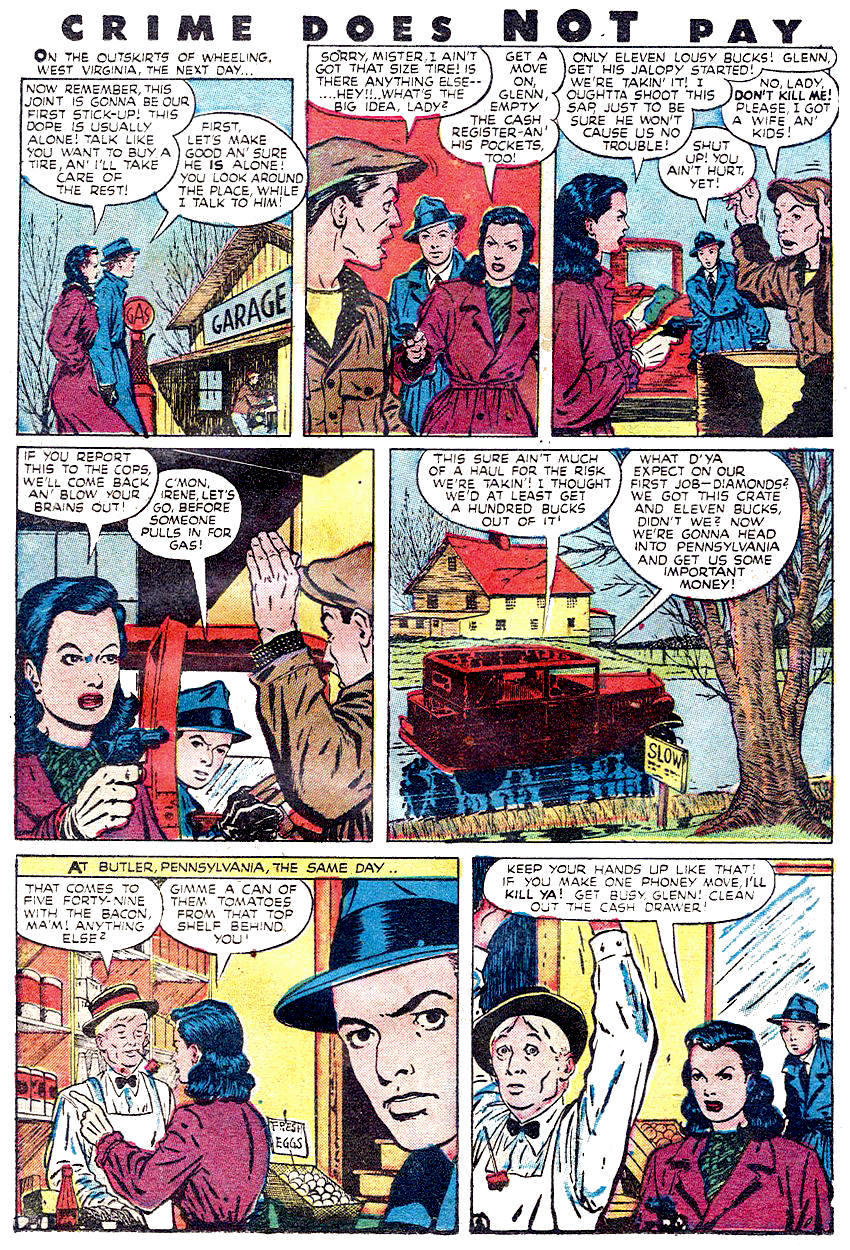 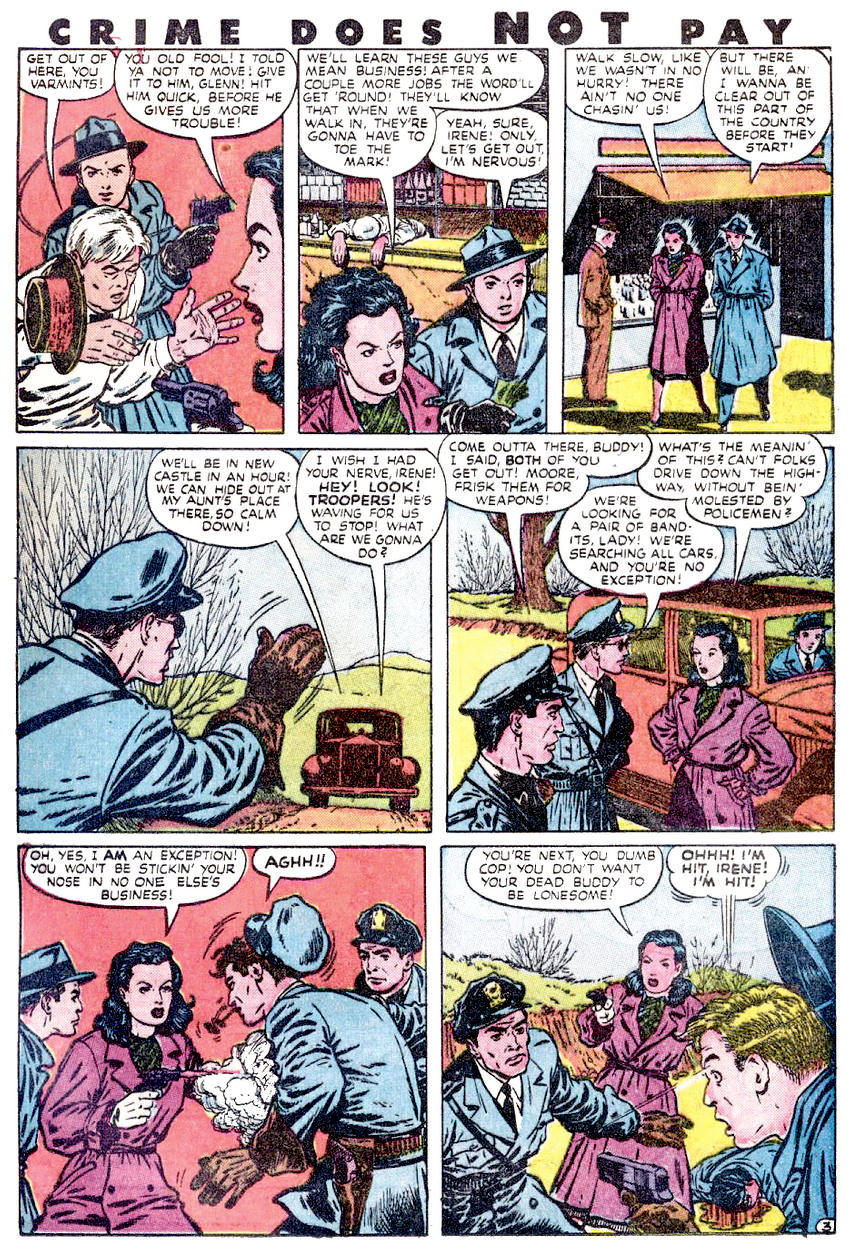 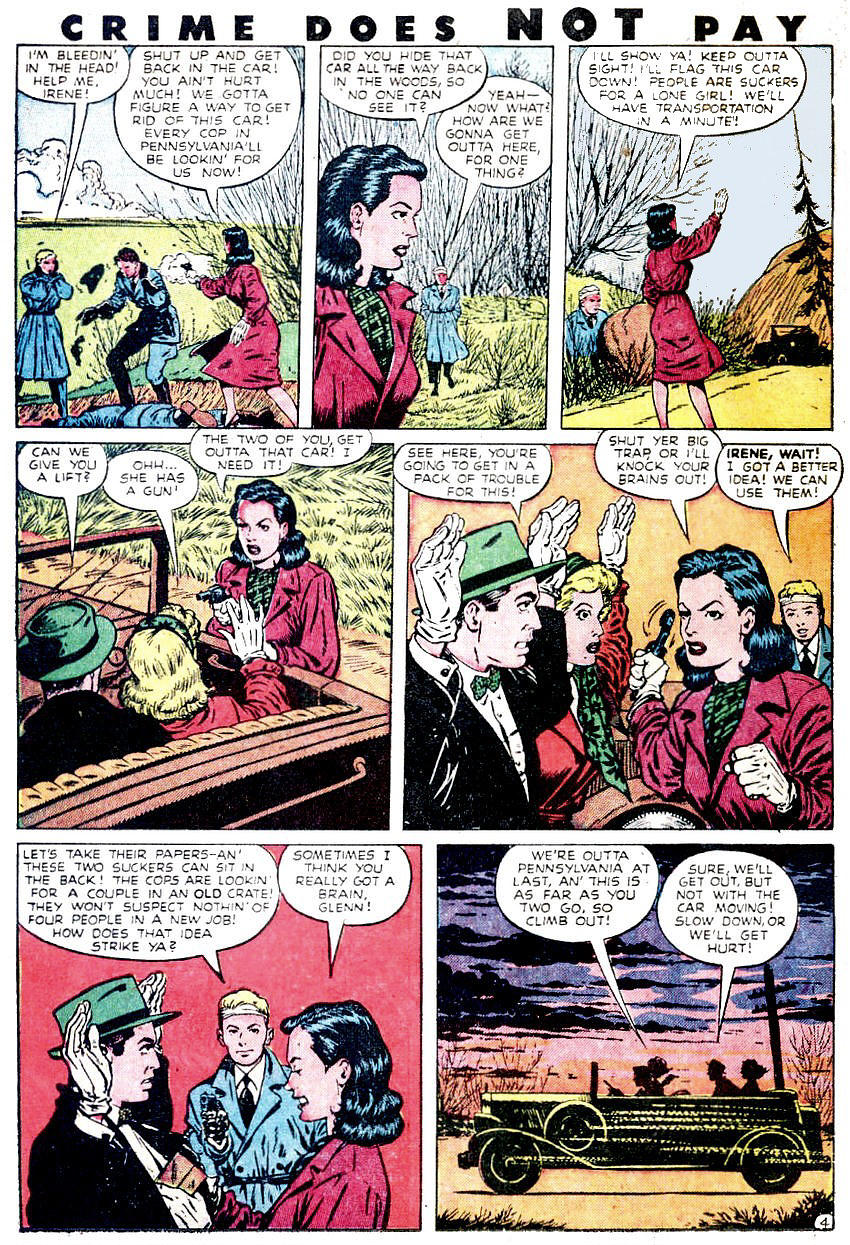 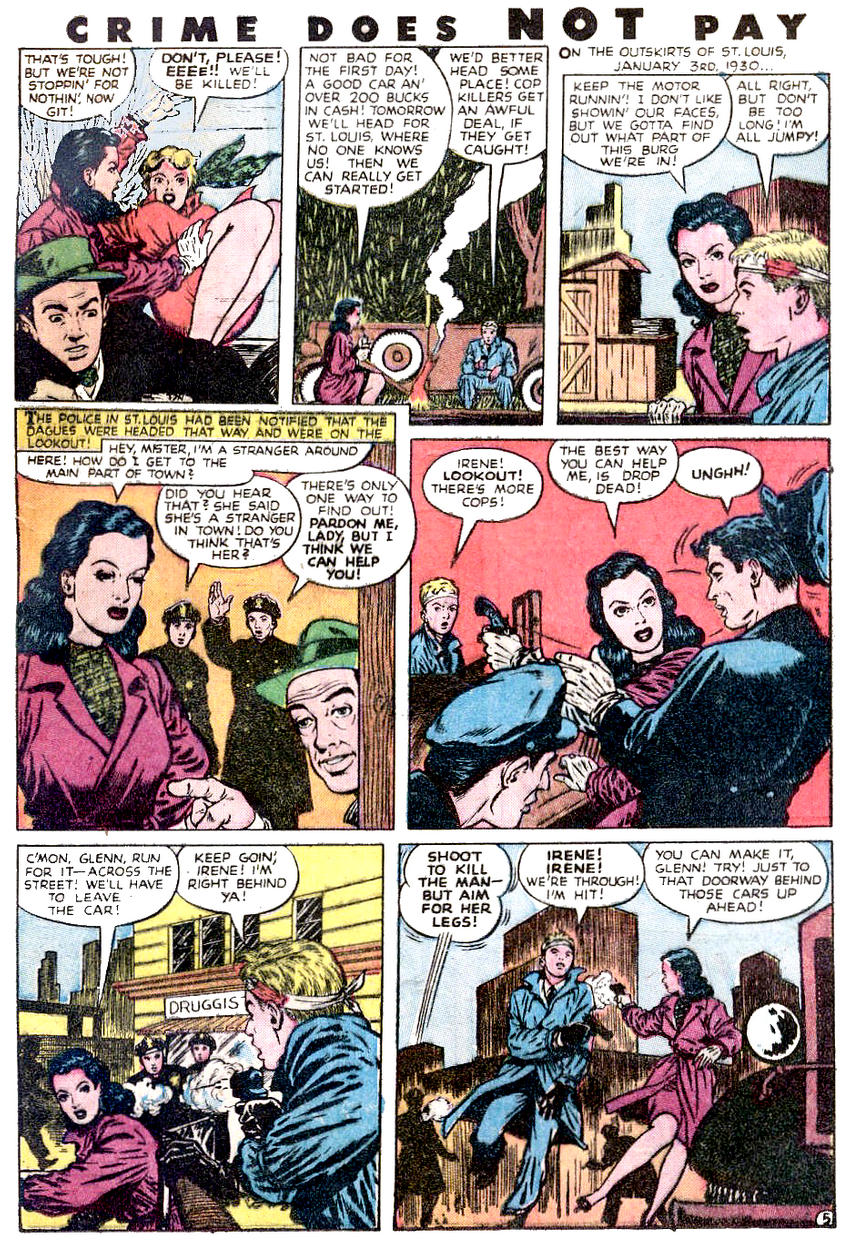 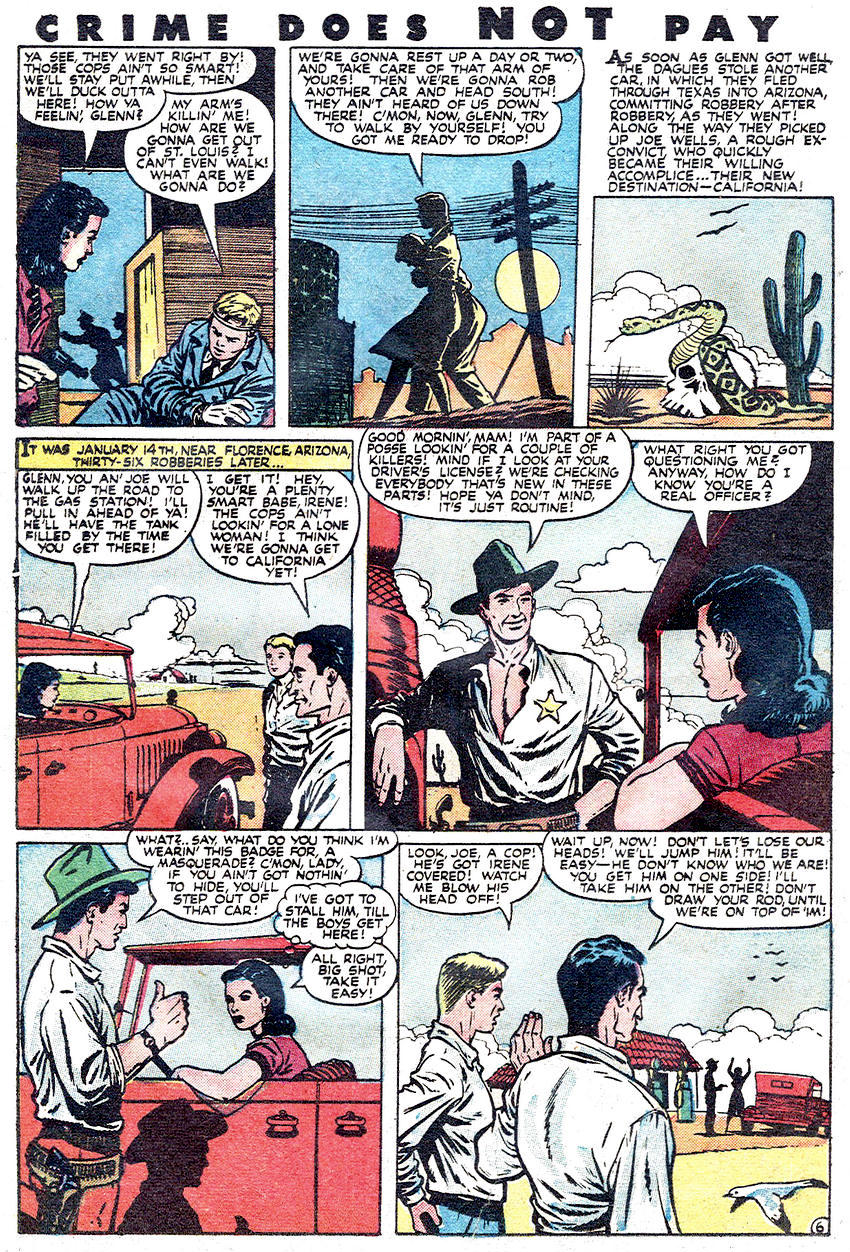 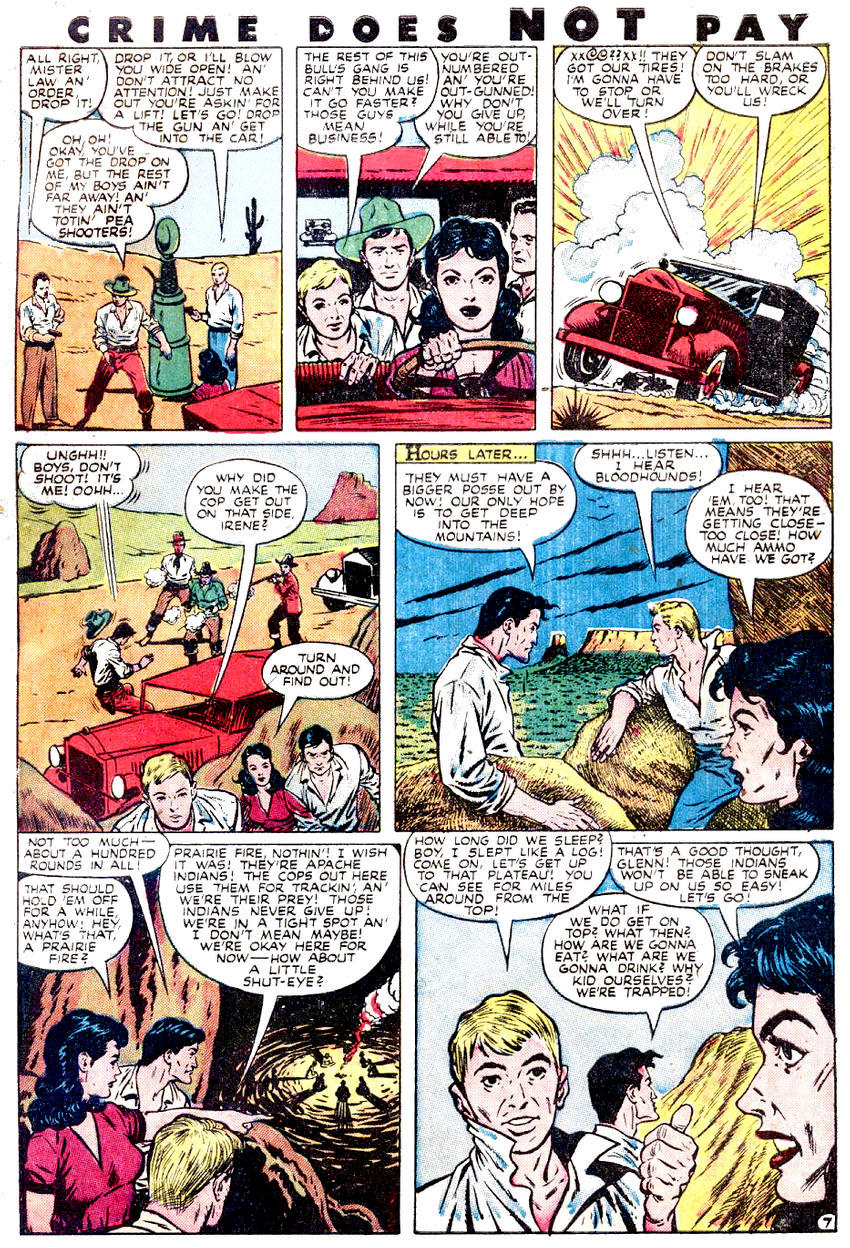 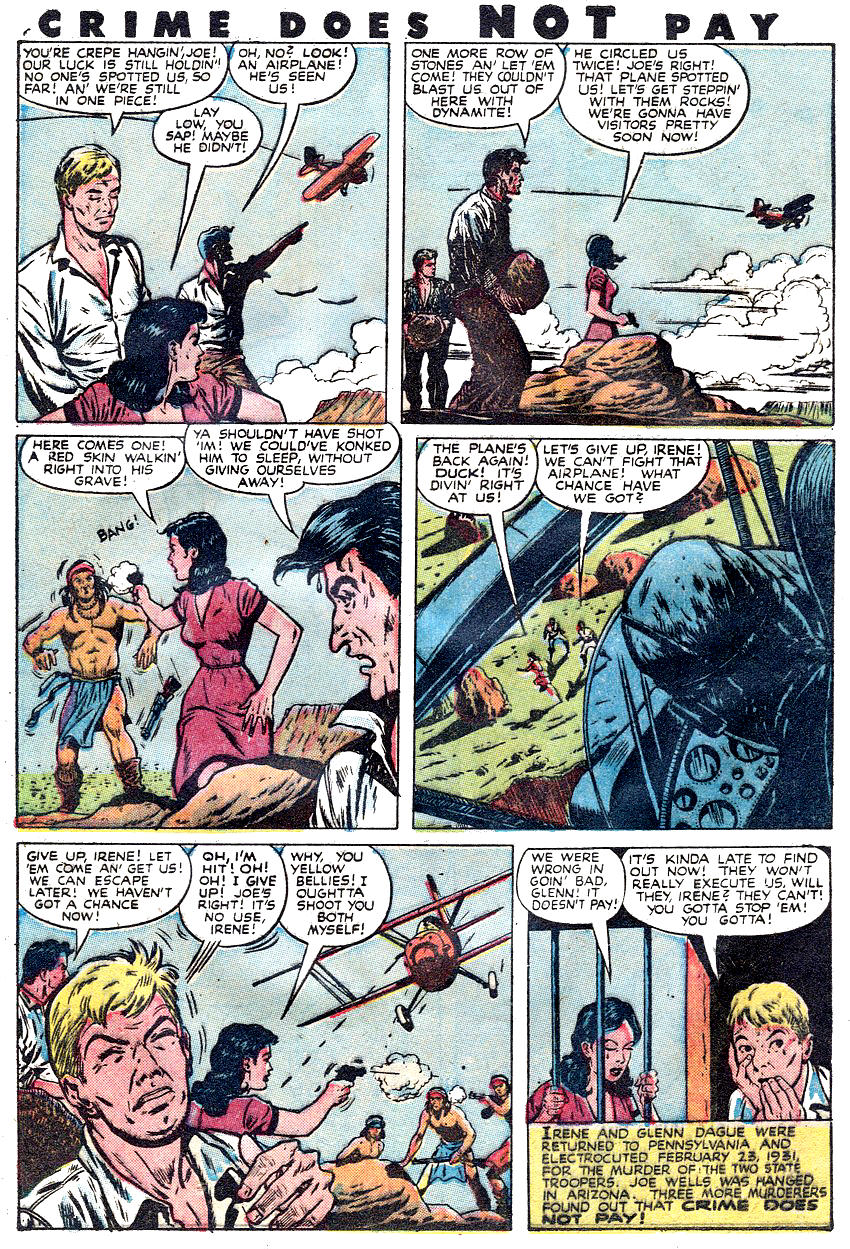 Interesting story and nice job on the art by Tuska, who doesn't always wow me, but this I liked. In the splash panel, the Indian lying on the ground is supposed to be shot, I imagine, and the shiny liquid supposed to be blood. Except the way it was colored (or not colored) makes it look like the Indian is asleep and drooling.
"Him Hibernating Bear...Him always sleep through gun battles."

It's always fun to read the "true" stories (as always, take everything with a grain of salt) next to the comic stories.

The comic omits the kid and makes Irene a lot prettier (and thinner) than she was in real life. It also adds the king kong-ish style airplane element that wasn't in the comic, but omits the more real -- and fun fact -- that they were lead down by a Native America, while tied to a horse!

One thing about crime comics and women being presented as ruthless monsters -- and the men as wimps; the only evidence in this case was in Dague's trial, and it could easily be an attempt to get him a lighter sentence. I think a lot of these comics portrayed women that way to make young boys more fearful of the "bad girls." Almost a form of early conditioning. I doubt it worked! :)

Note that Irene went to the electric chair unrepentant; as you guessed, the article says.

There is a tradition, especially in fiction, of cutting beautiful women more slack over things such as, well, homicide. And, has long been noted, comic books tend to represent women as beautiful; most of the readers want to look at pretty girls, and most of the artists want to draw them. Combine that with a felt need to have crime not pay, and the female criminals almost have to be presented as worse characters than the males.

Brian, Daniel...maybe we've discussed this before, but my impression of many of these "true" crime stories is the writers didn't actually do any real research (it doesn't look like they went to the New York Public Library and spent hours checking out newspaper stories from decades past), but perhaps were using memory to write these stories.

The editors probably demanded so many violent and anti-social acts per page. The stories seem structured to show as much mayhem and lawlessness as possible in a short space. So the writers had to script with that in mind, whether it was "true" in the truest definition of true or not.

Apocolyte...good catch there on what looks like a coloring error, turning blood to drool! I hadn't noticed. I did notice that the Indians look more 1870s than 1930s.