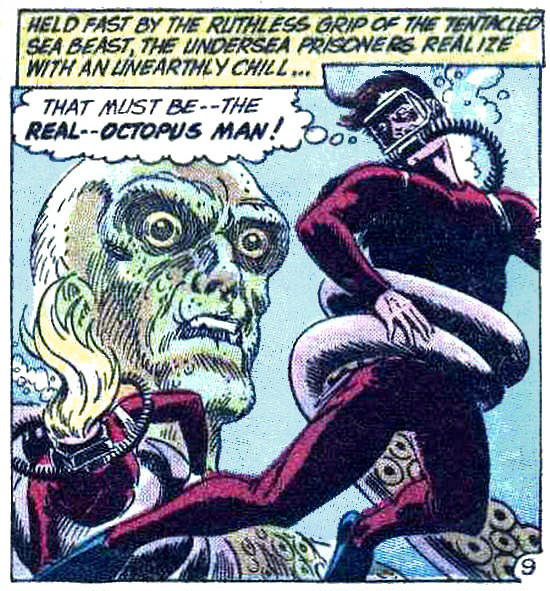 Despite dropping almost all my DC Comics purchases in '61-'62 after Marvel introduced The Fantastic Four and the rest of their early hero lineup (a fickle fan, wasn’t I?), an exception was DC’s Sea Devils. I bought it because of Russ Heath’s artwork. It’s telling that I stopped buying the book after issue #10 when other artists took over. It wasn’t that they were bad artists, just that I was buying the book because of Heath.

Looking at #1 after 50+ years makes me wonder if I just looked at the artwork without reading the stories, because I don’t remember them. Like this first story from issue #1, about a movie with a robot Octopus Man who roams the ocean floor walking a huge octopus on a leash. Then a real Octopus Man shows up. Next to this The Fantastic Four seems almost non-fiction. But there is that Russ Heath artwork, and that makes up for the implausibilities and overall silliness of editor Robert Kanigher’s scripts. 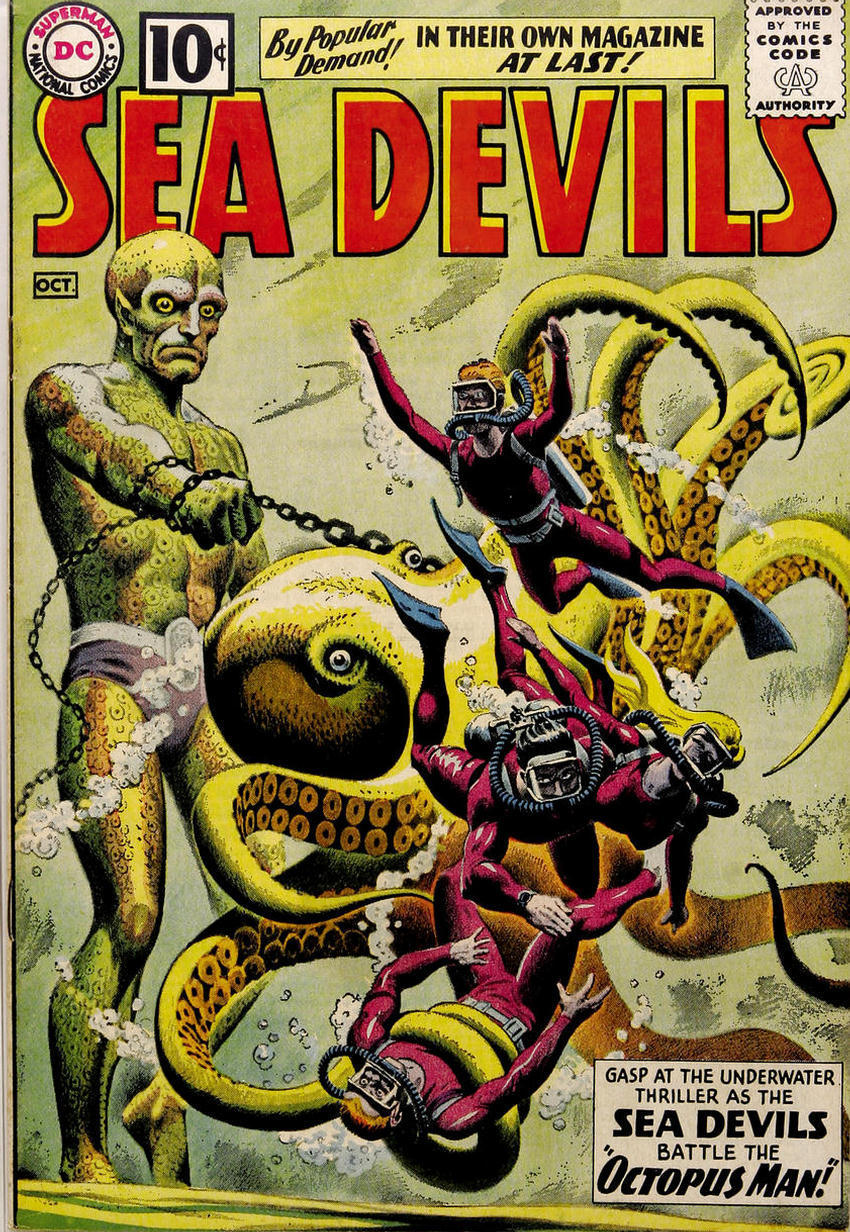 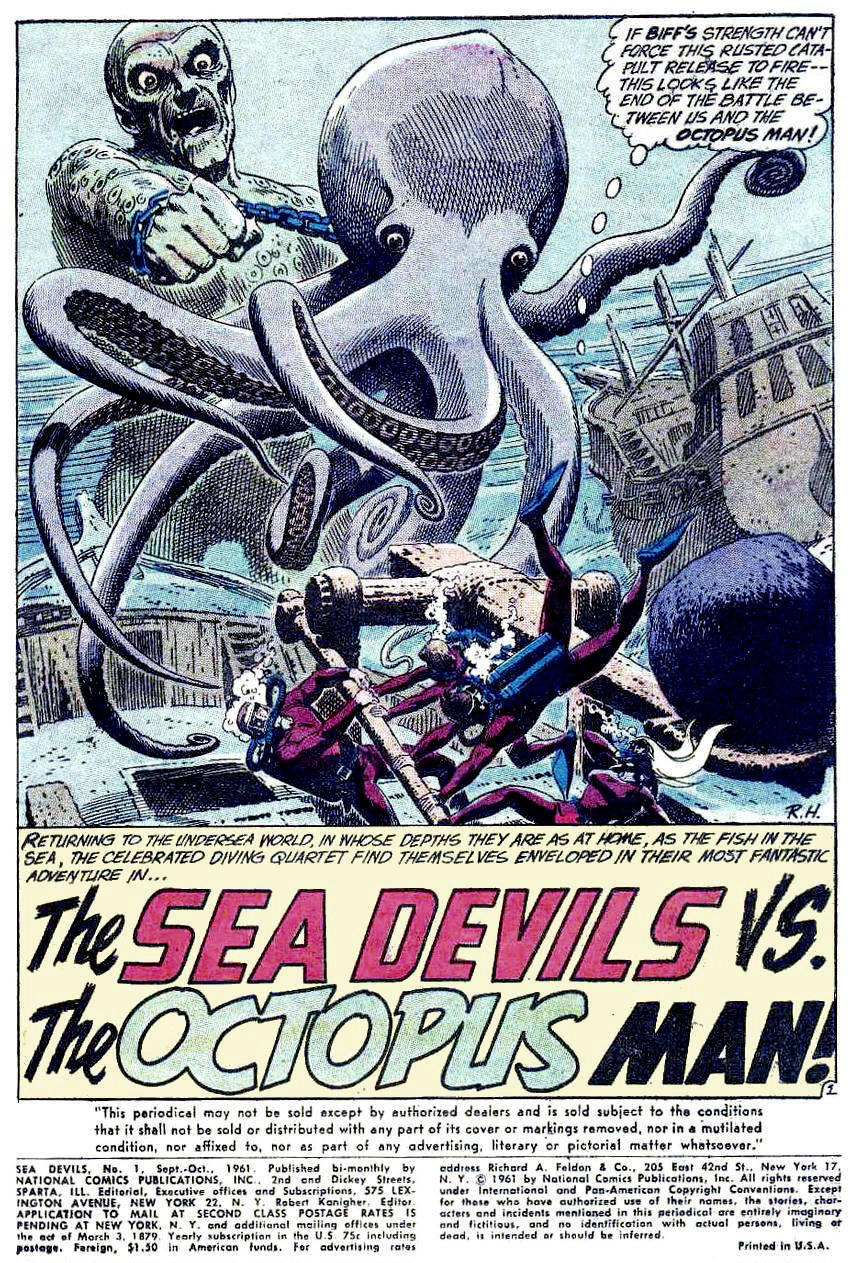 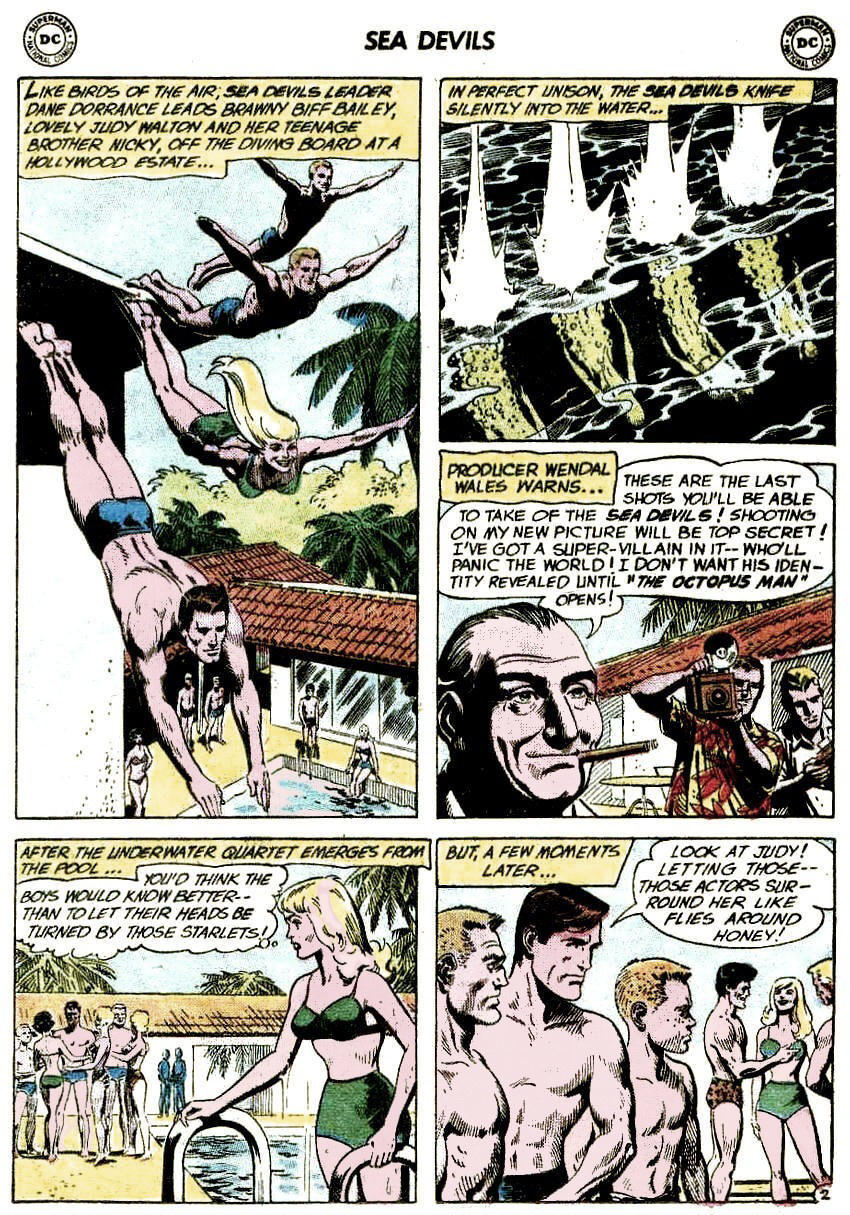 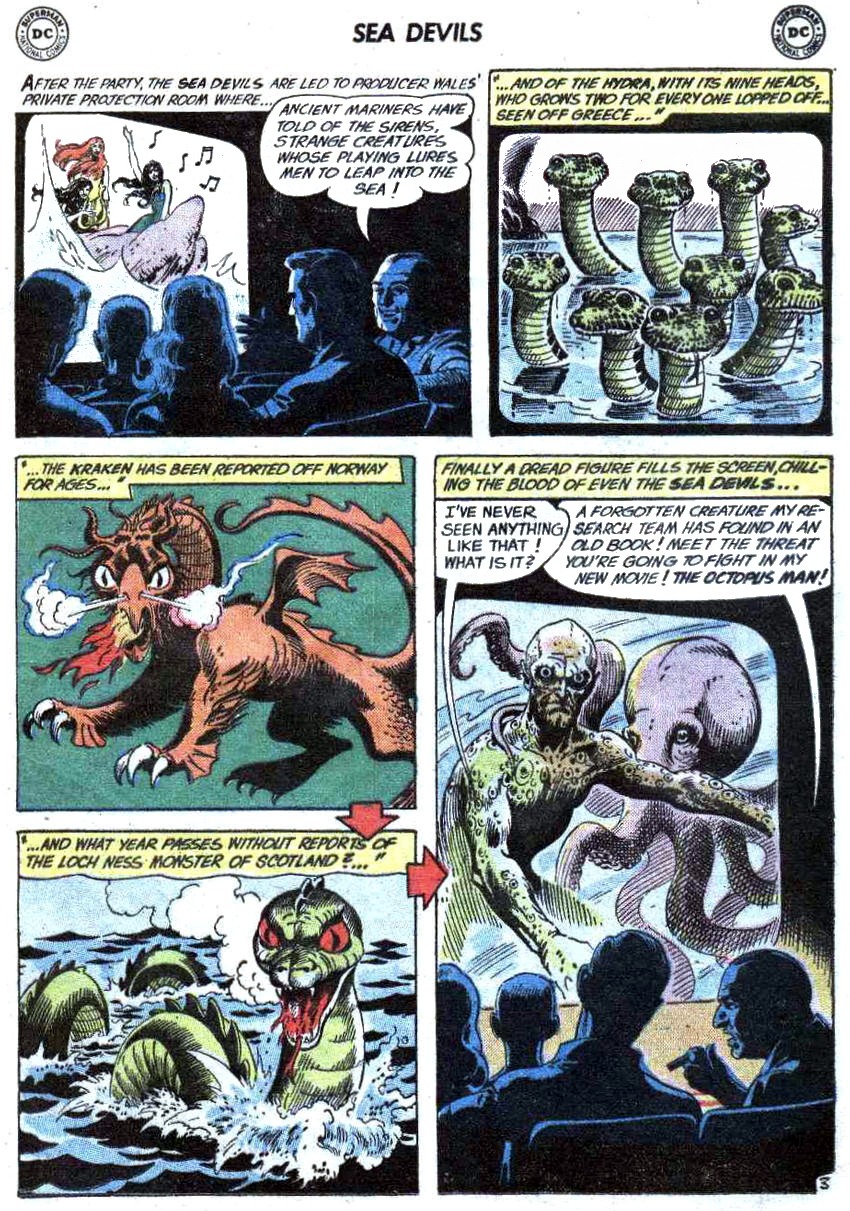 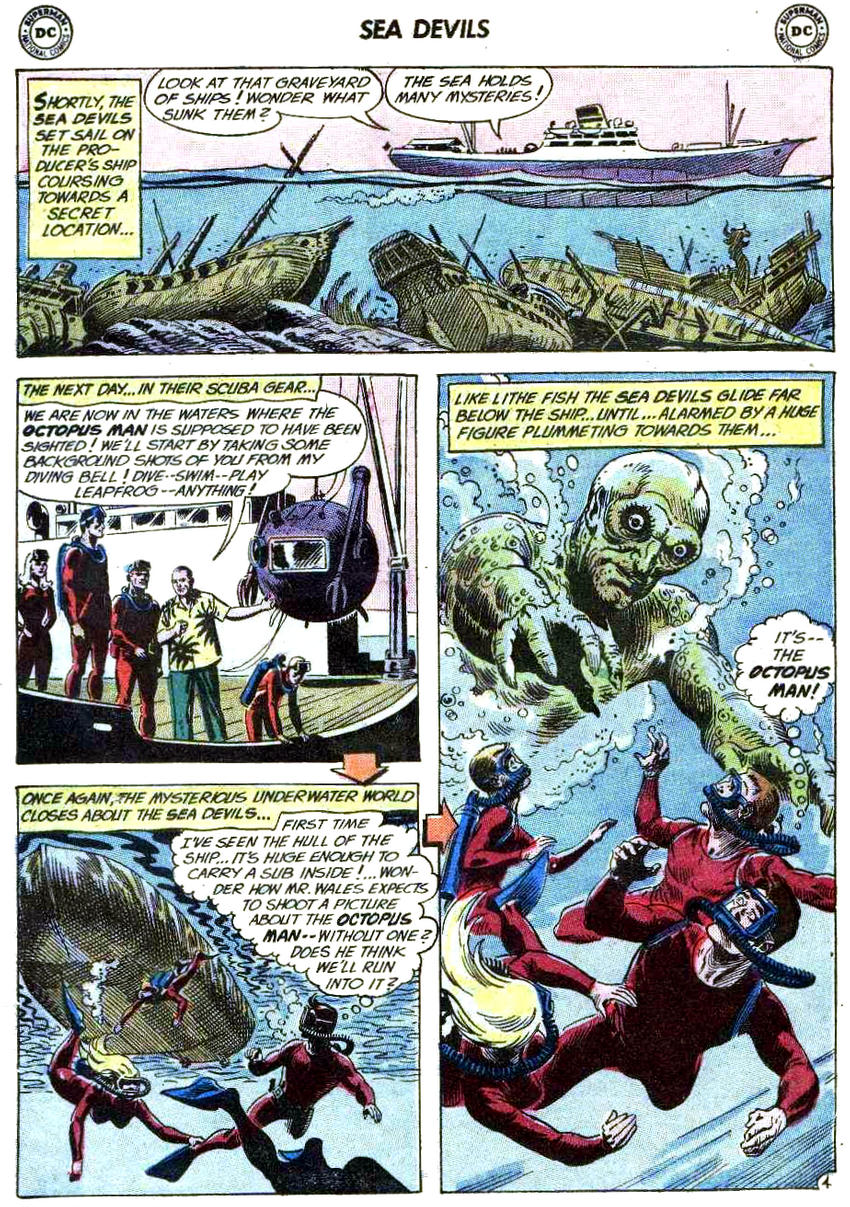 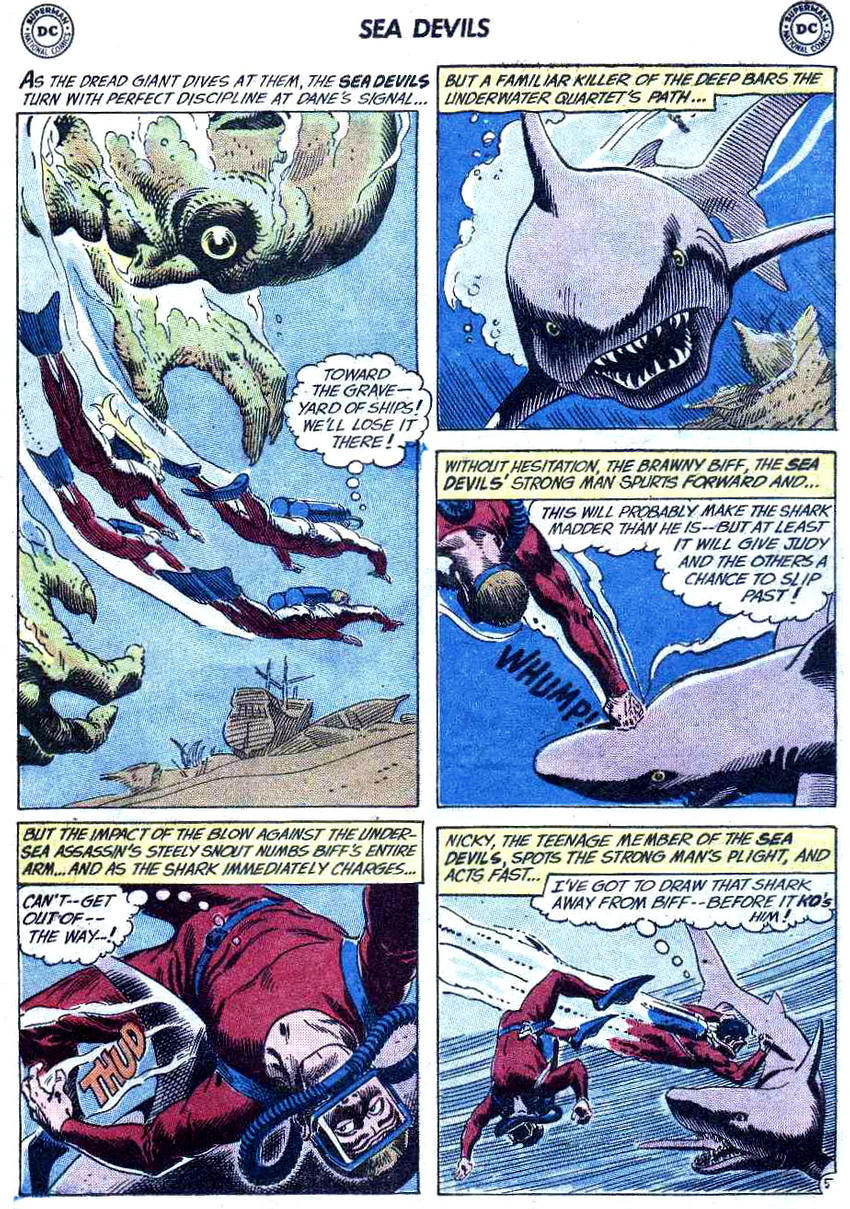 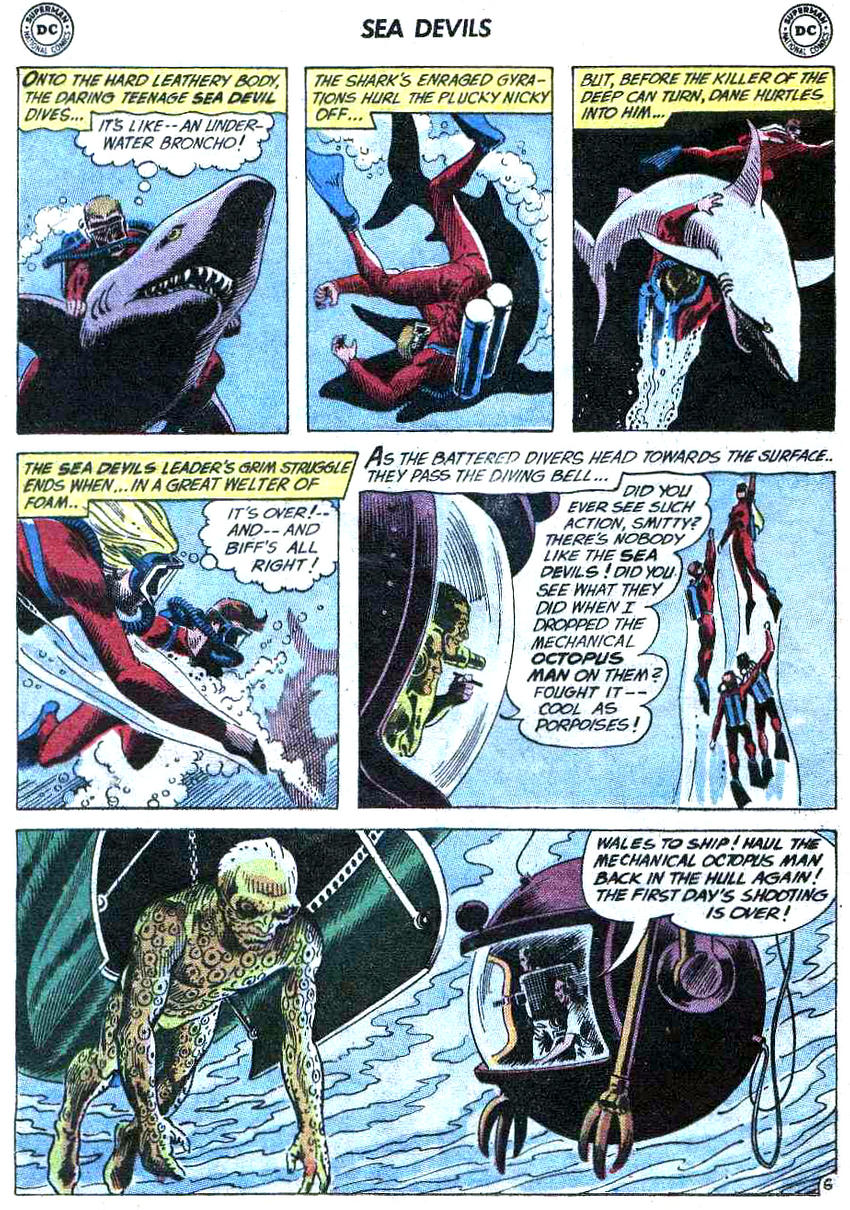 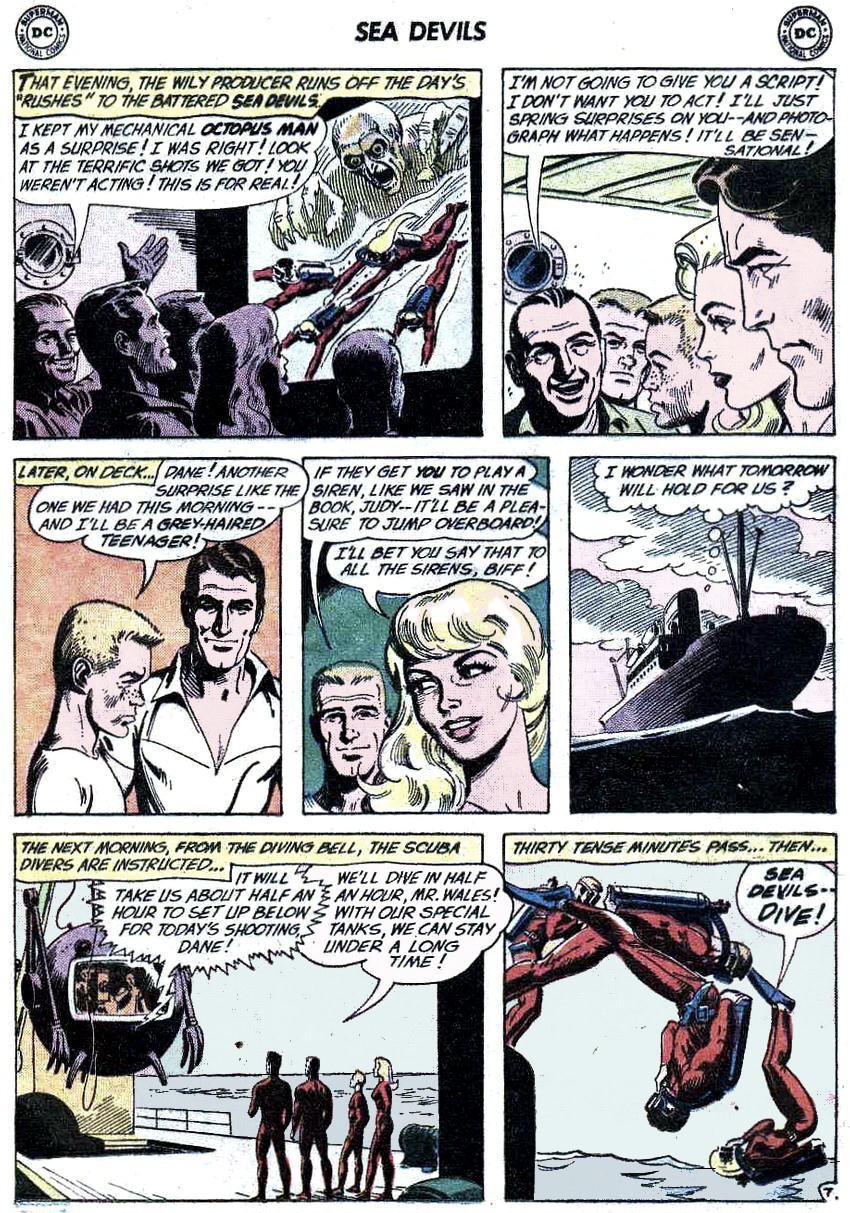 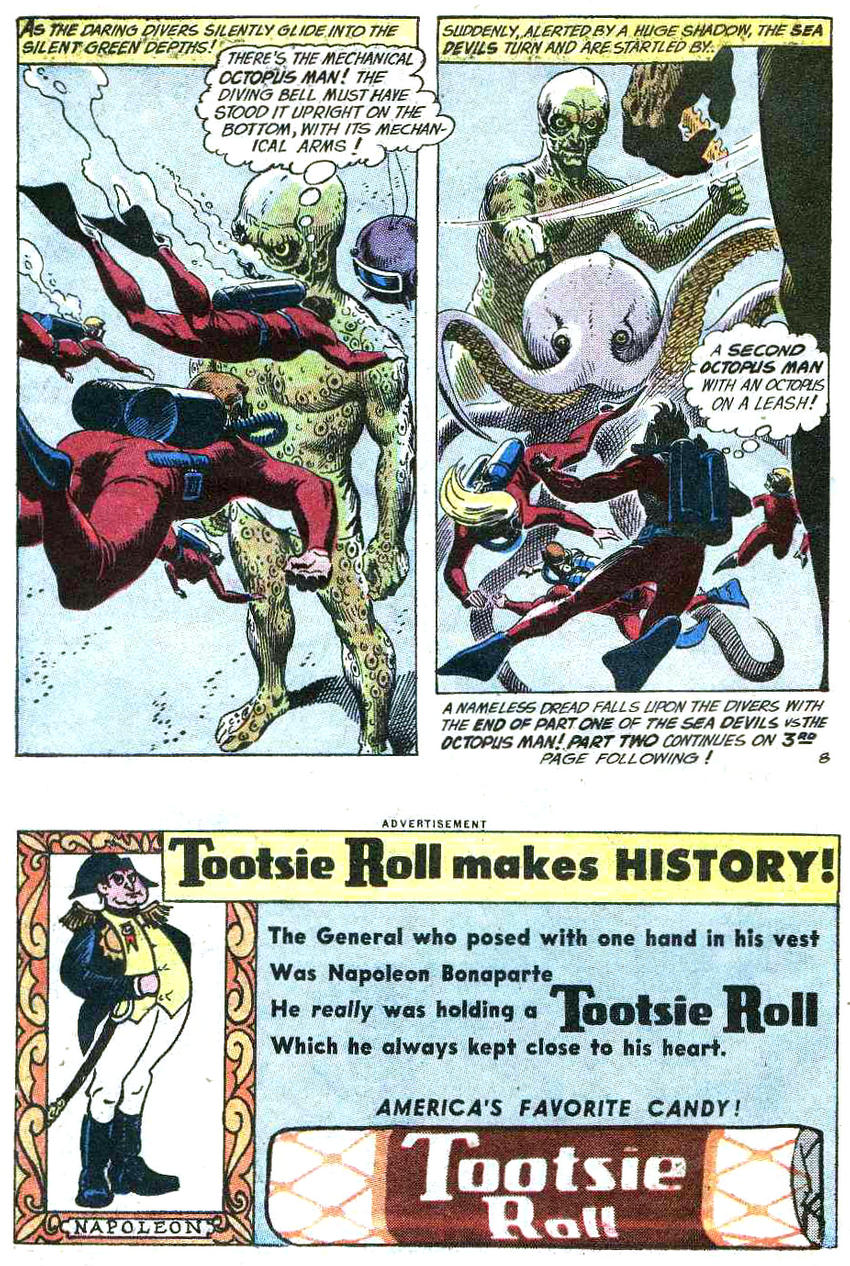 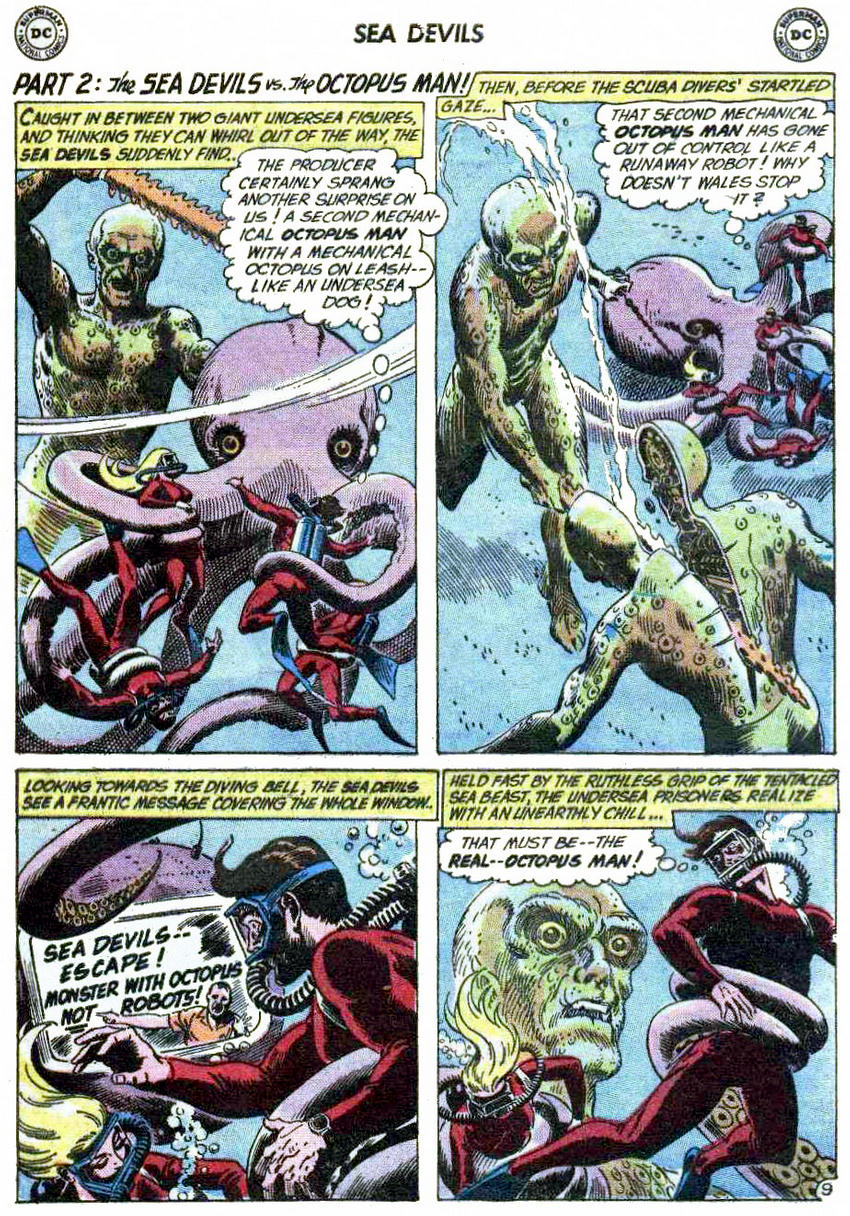 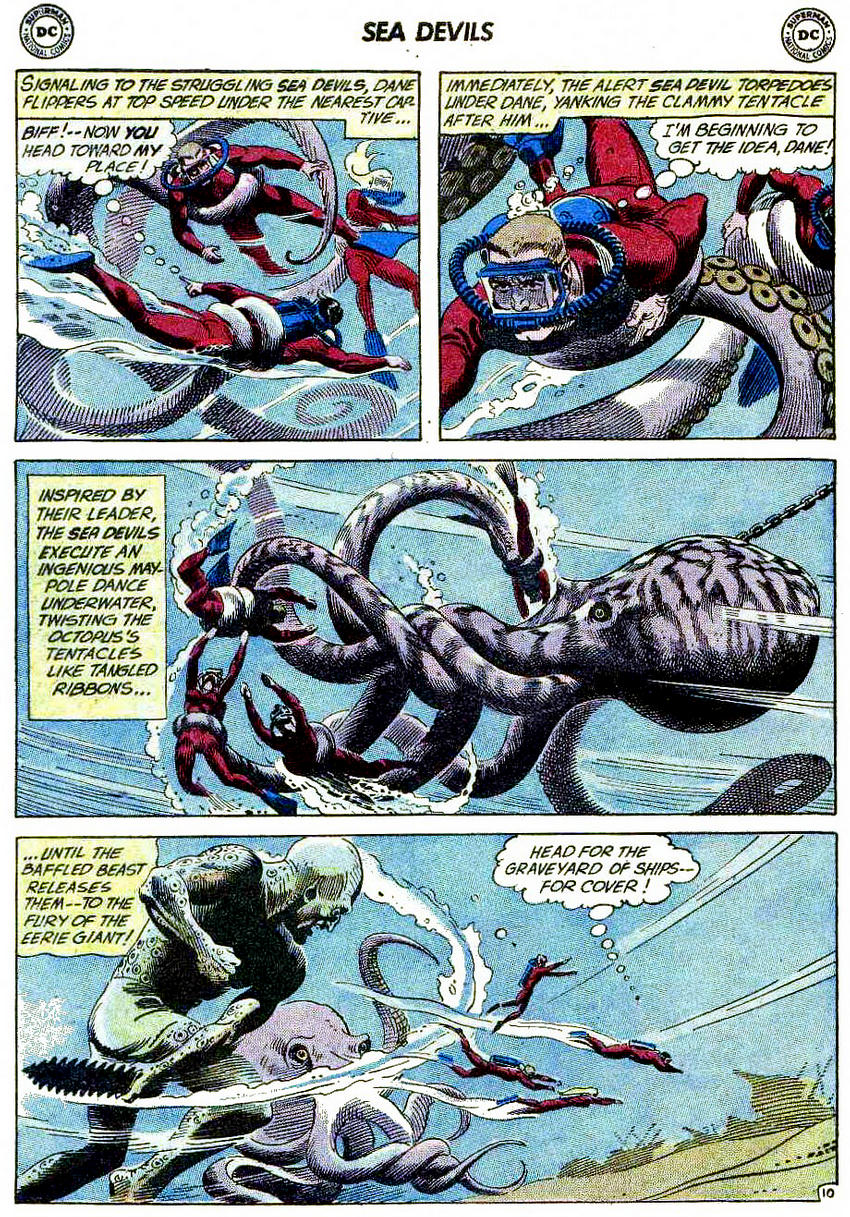 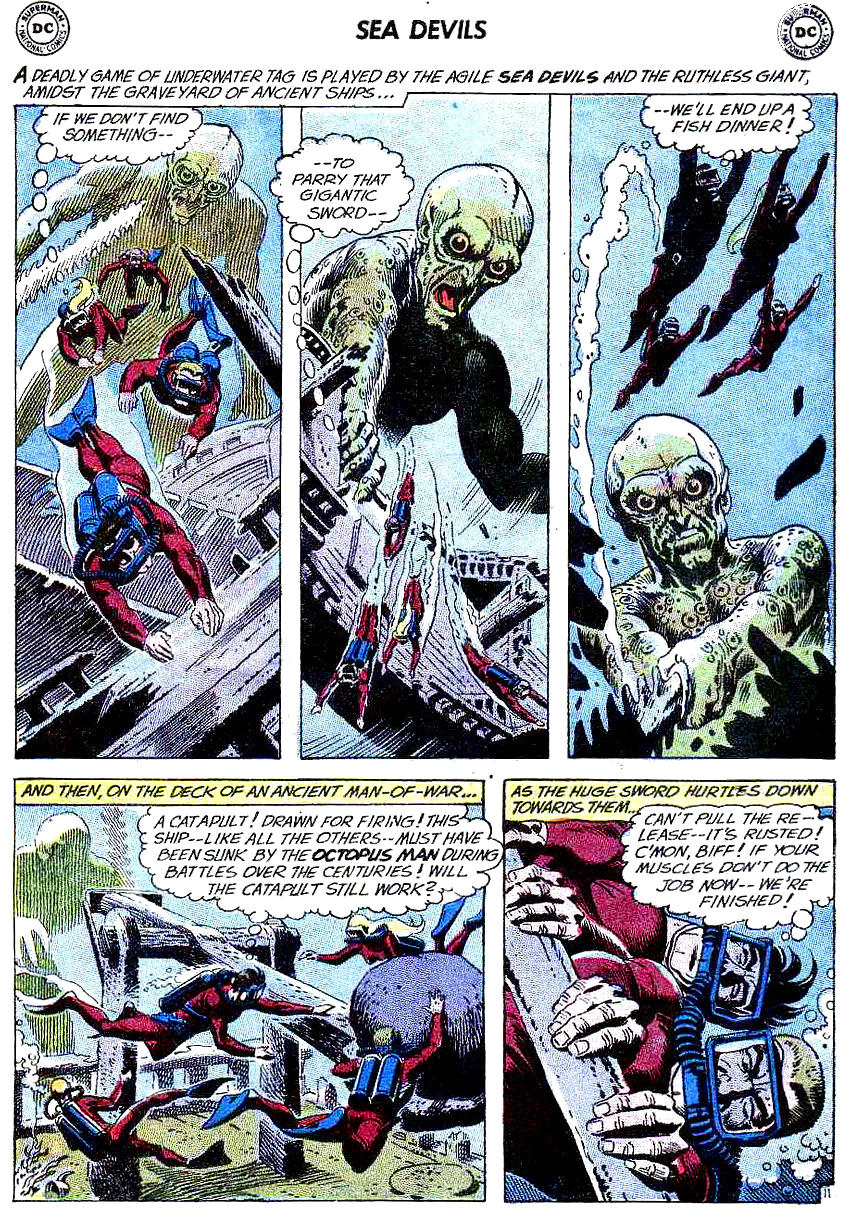 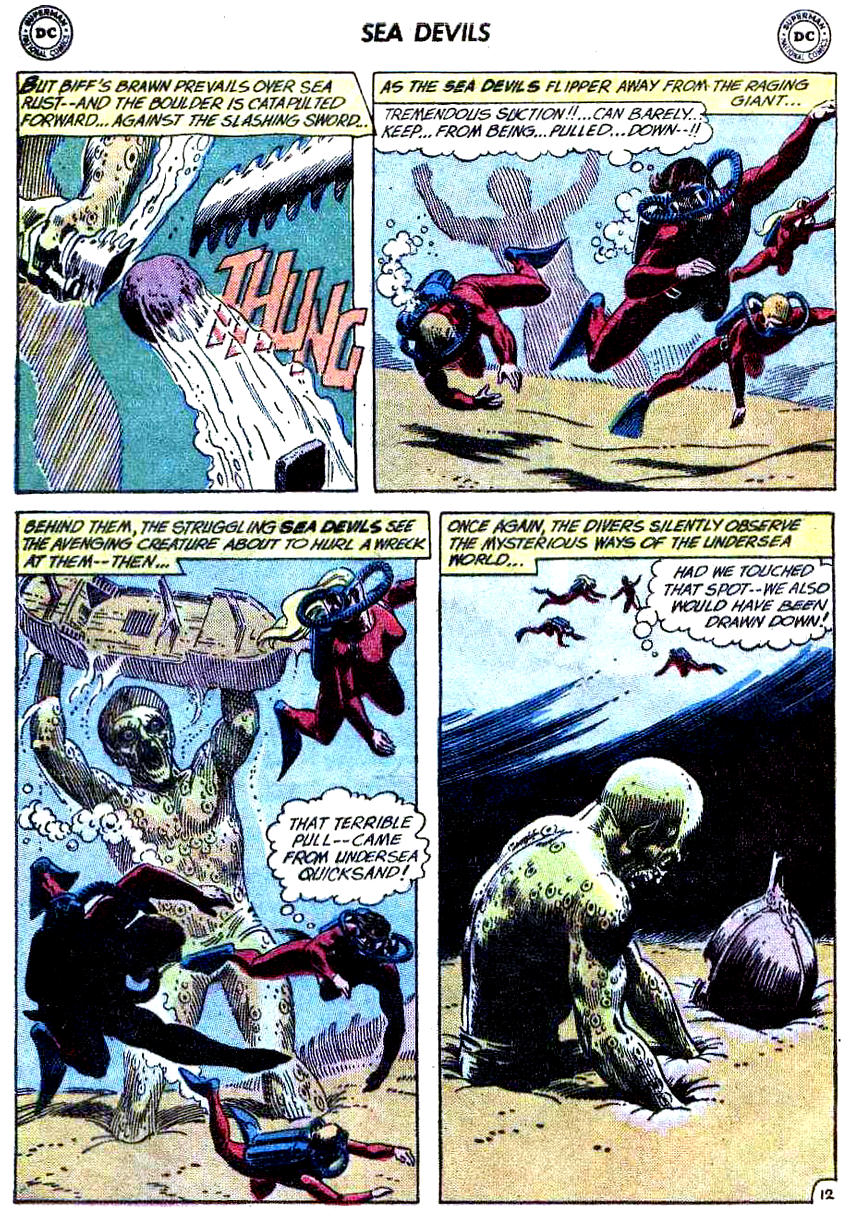 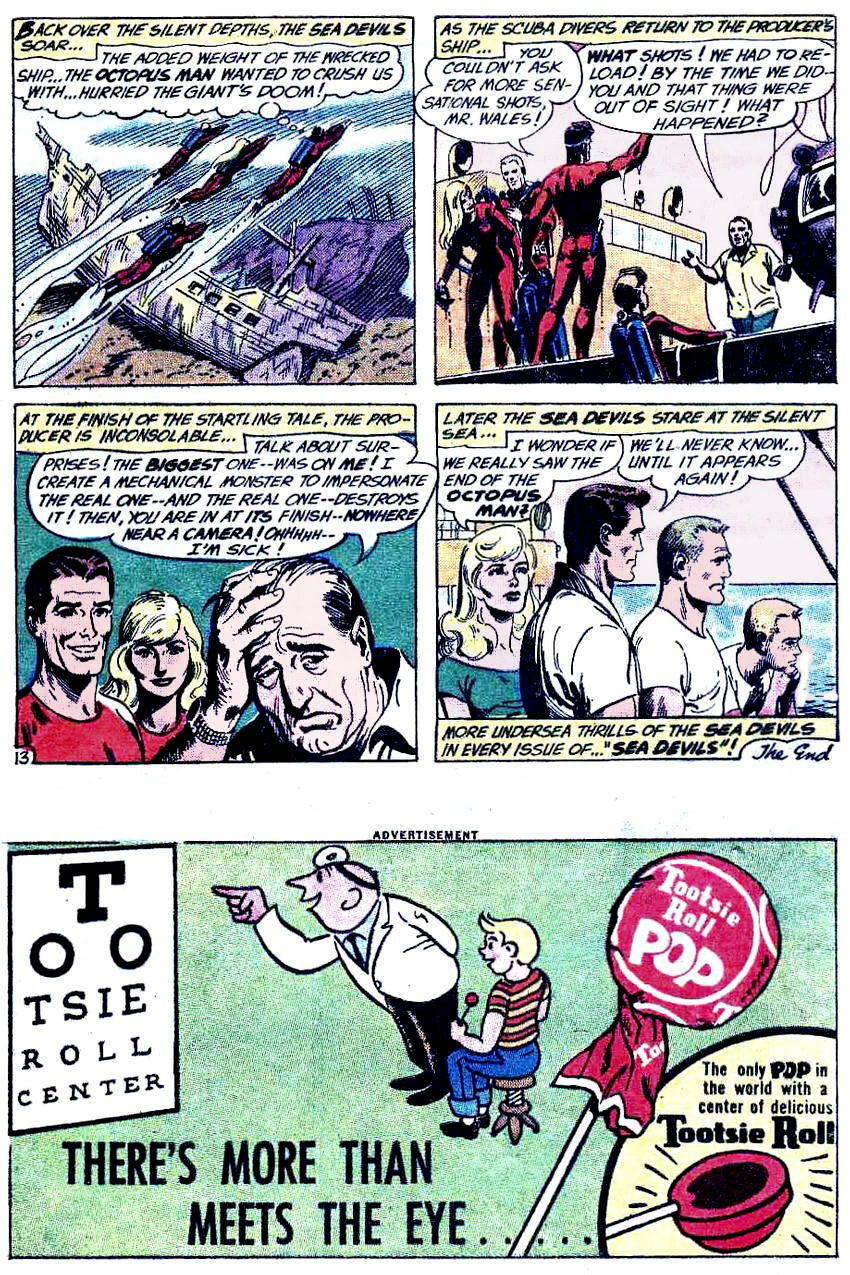 Hmmm. Team leader, his girlfriend, her teen-age brother, & a "brawny" dude. Sounds familiar, can't quite put my finger on it 'though.

Wow! I have to agree with you about Heath, his beautiful art can negate the inherent silliness of DC storylines from this era! What a gorgeous wash style cover! The color on the cover and also the interior art is really nice, especially for the early 60's. DC did manage a few really cool wash covers like this during this era. If I had seen this comic in the rack I would have snatched it up promptly!

Regarding the story, suffice to say it's the only story in my memory to feature the phrase "octopus on a leash"! I won't even mention the faulty physics demonstrated during the "underwater catapult" sequence!

I think they should have had lovely Judy Walton ditch brawny Biff and the rest and made a comic with her and a trio of bikini -clad sea devils instead! (Droool!)

I forgot to mention...take a closer look at the last panel on page 2 and what the "actor" appears to be doing to lovely Judy!

Why, M. Bouffant, allow me to assist you with a recollection. You are probably thinking of The Fantastic Four...which appeared a year after the Sea Devils were introduced in Showcase #27!

Apocolyte, page two last panel...yes. Looks like they got one past the Comics Code. Thanks for pointing it out. My eyes aren't what they used to be when spotting semi-hidden naughtiness.

And of course the question never asked by anyone in the story is, how did the movie people know exactly what the Octopus man looked like, right down to the height of the robot version.