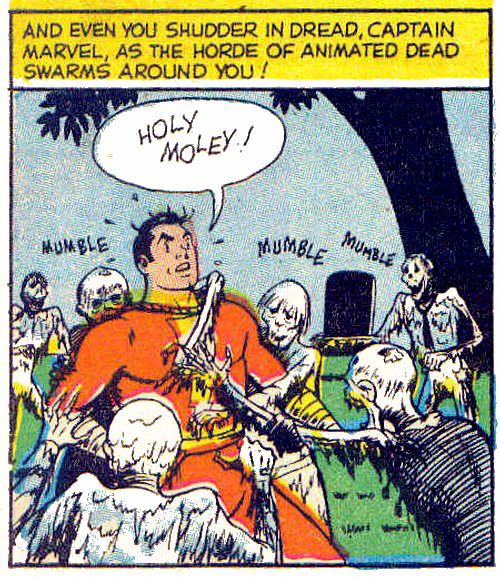 A couple of things caught my eye when I read this Captain Marvel-King Kull tale in Captain Marvel Adventures #141 (1953). First, it has walking dead. That’s good. Second, it is told in the second person, which isn’t good or bad, just different than the usual third person that Captain Marvel stories were written in by chief scripter Otto Binder.

Then there is the so-so, which is a satire on Captain Marvel, “Captain Marble Flies Again,” done for Premier’s Nuts!#5 (1954), after Captain Marvel was cancelled. The story has its moments, but it depends on your tolerance for this type of satirical treatment. (It has a hooker under a street light putting the moves on Captain Marble; that’s interesting and solidly pre-Comics Code). 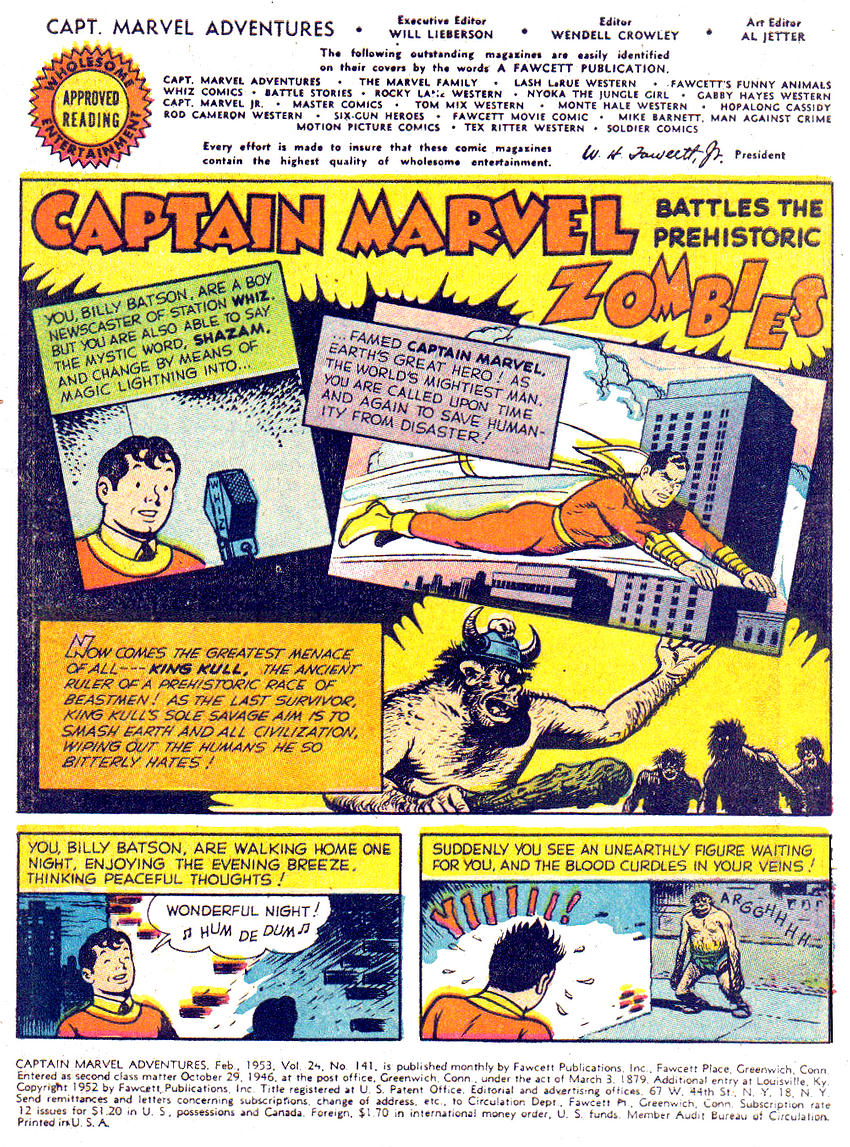 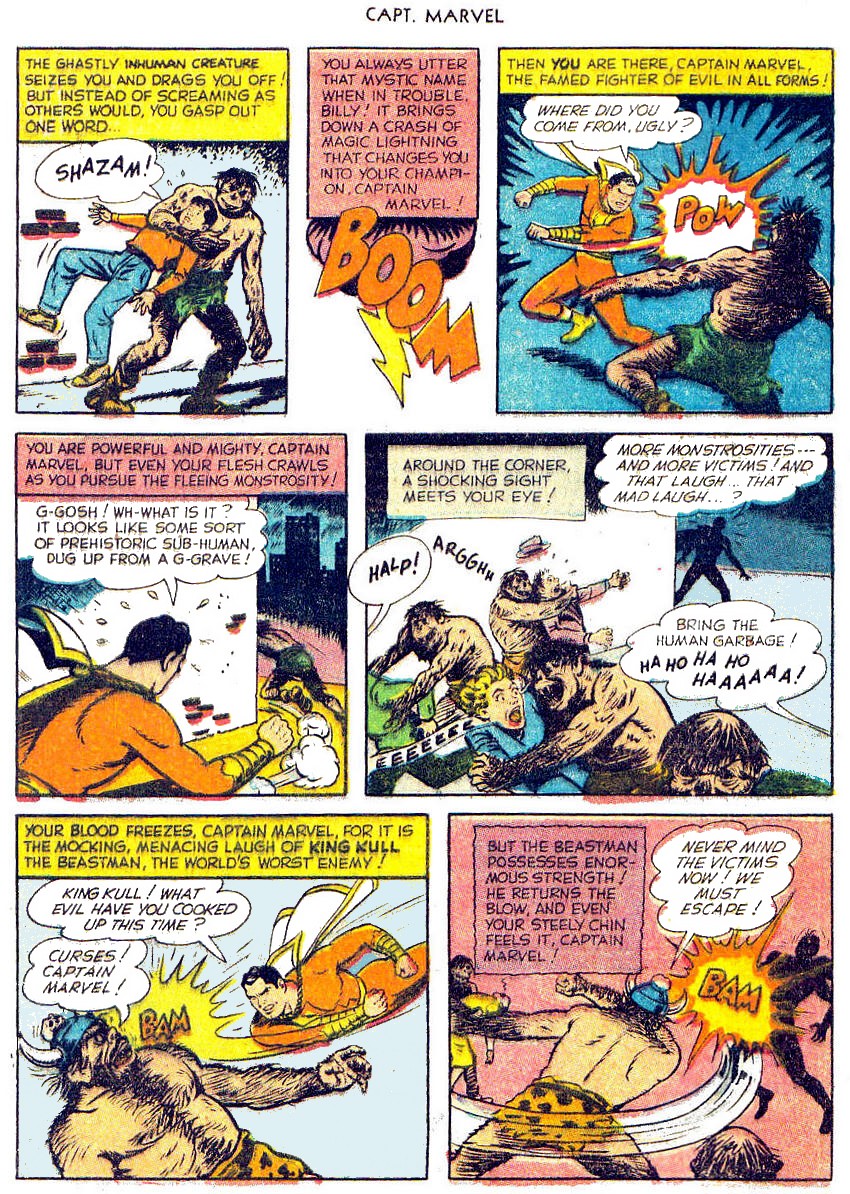 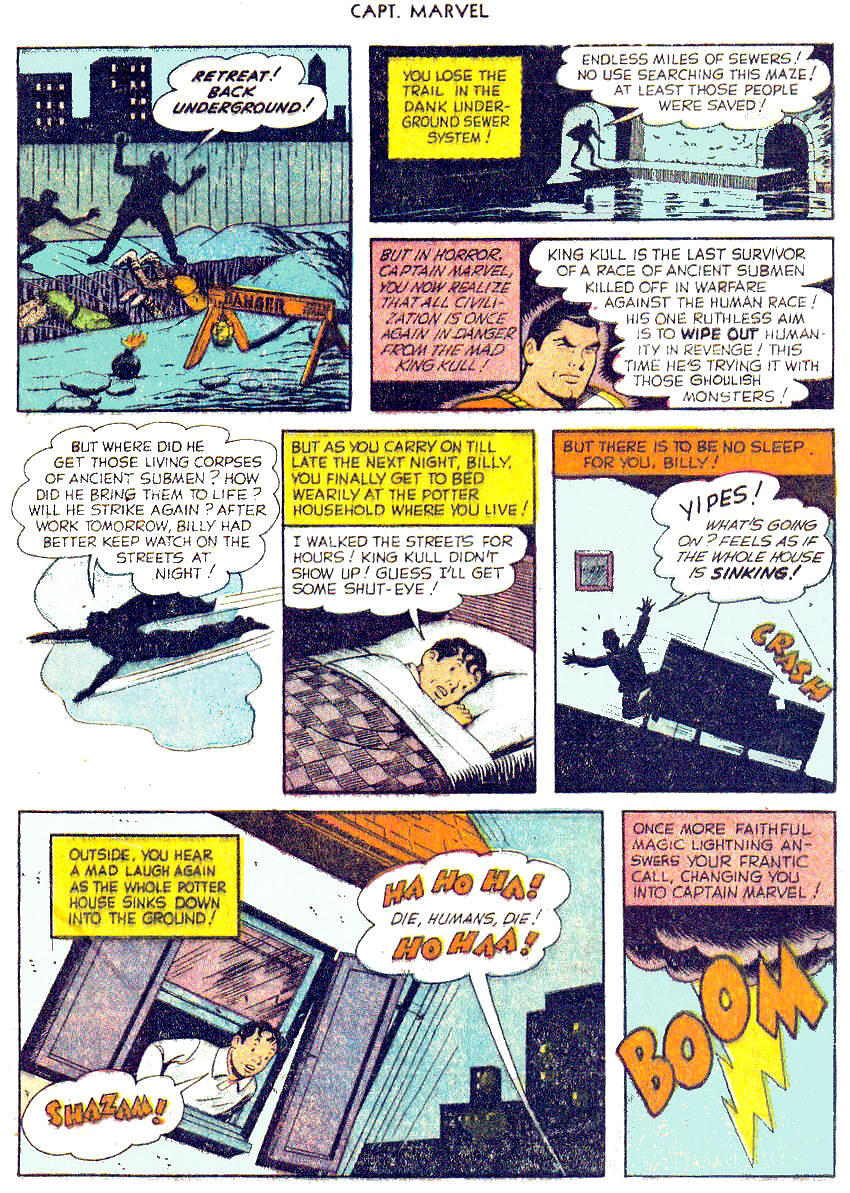 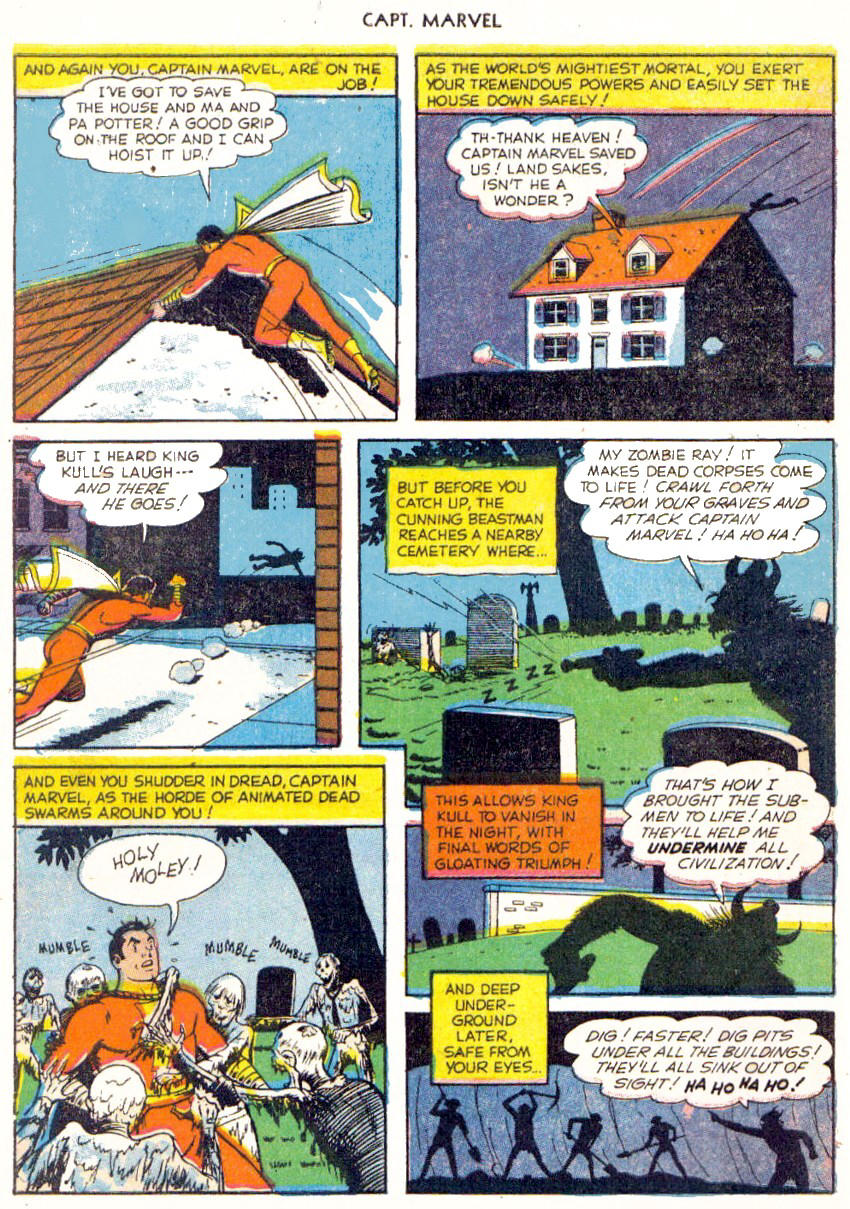 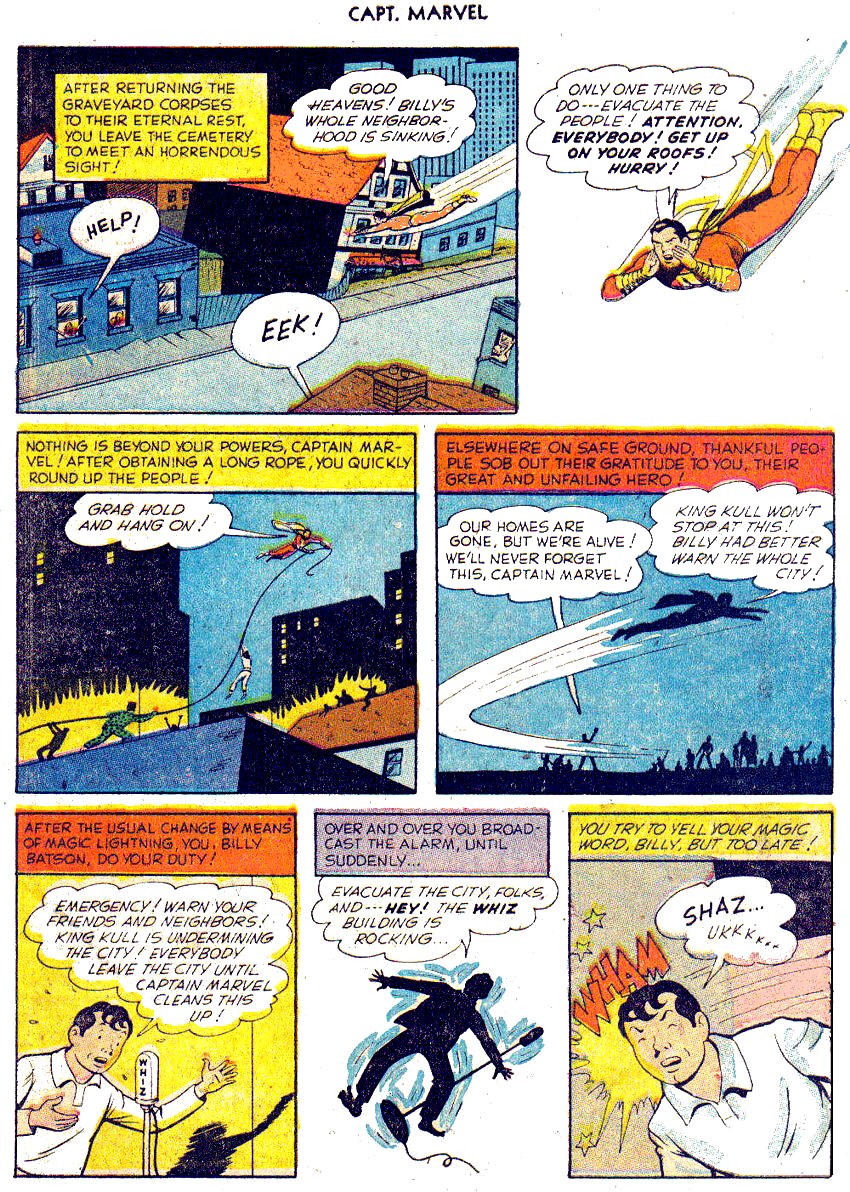 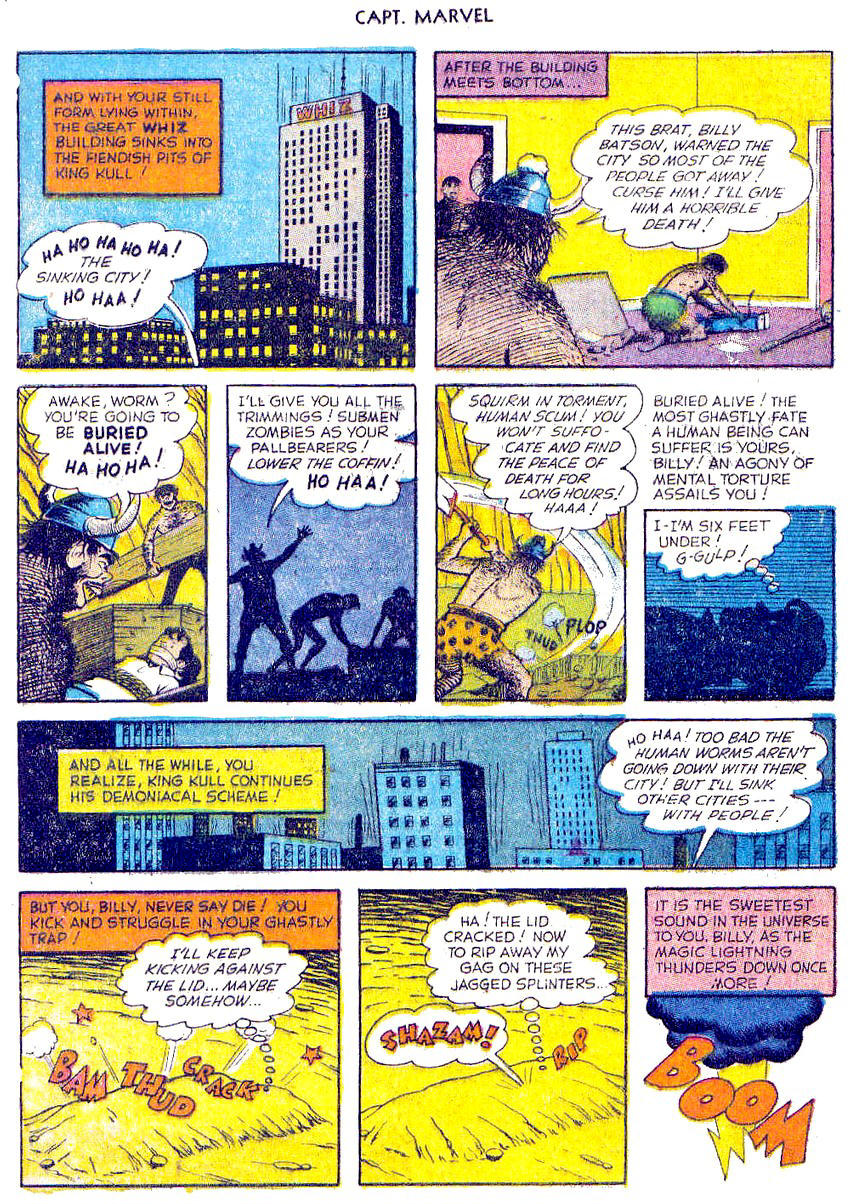 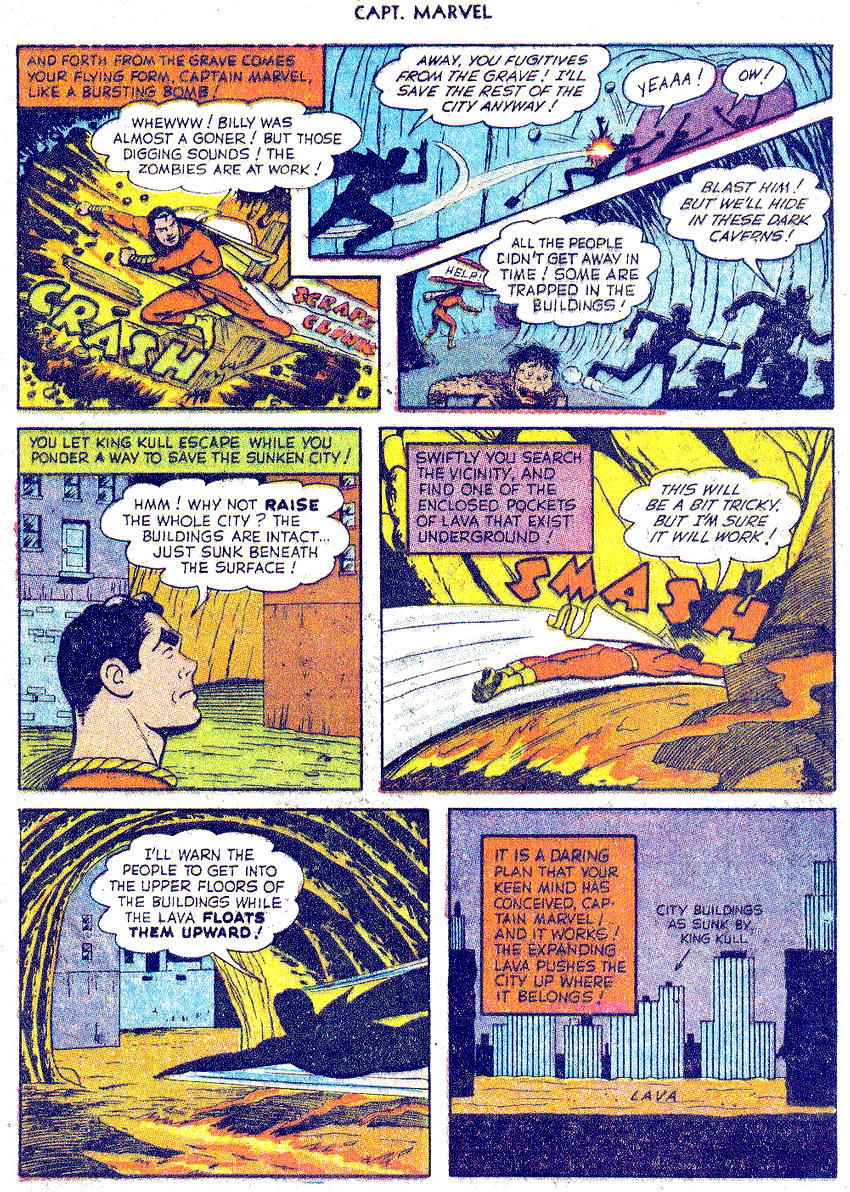 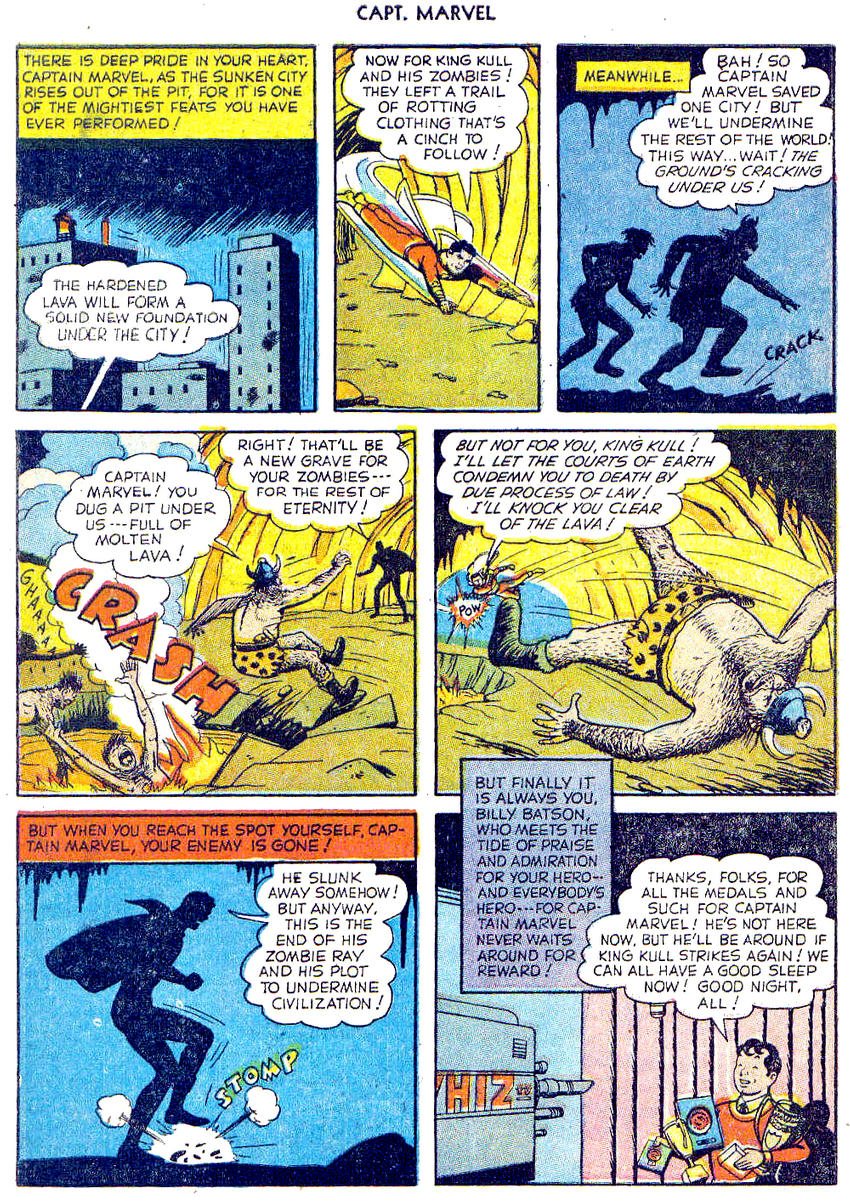 You remember another story done for Mad #4, “Superduperman” (below) featuring Captain Marbles and Superduperman in battle. It was a reference to the lawsuit against Fawcett by DC for copyright infringement, which which was ultimately decided in favor of DC. Go to Apocolyte’s World of Comics for the Mad story and some bonuses.

Ross Andru drew “Captain Marble Flies Again.” He and partner Mike Esposito published their own short-lived satire comic, Get Lost!. I wonder if this story was originally something they had prepared for that book. 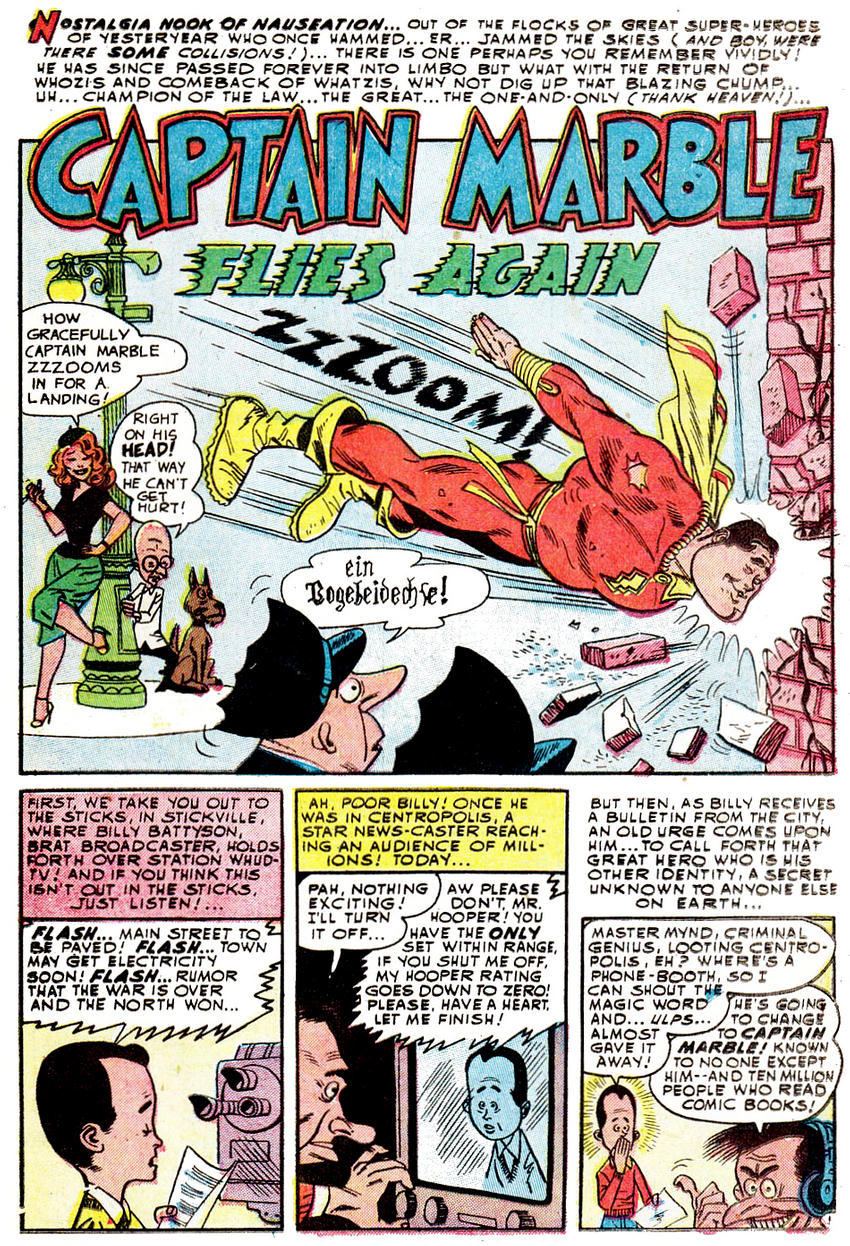 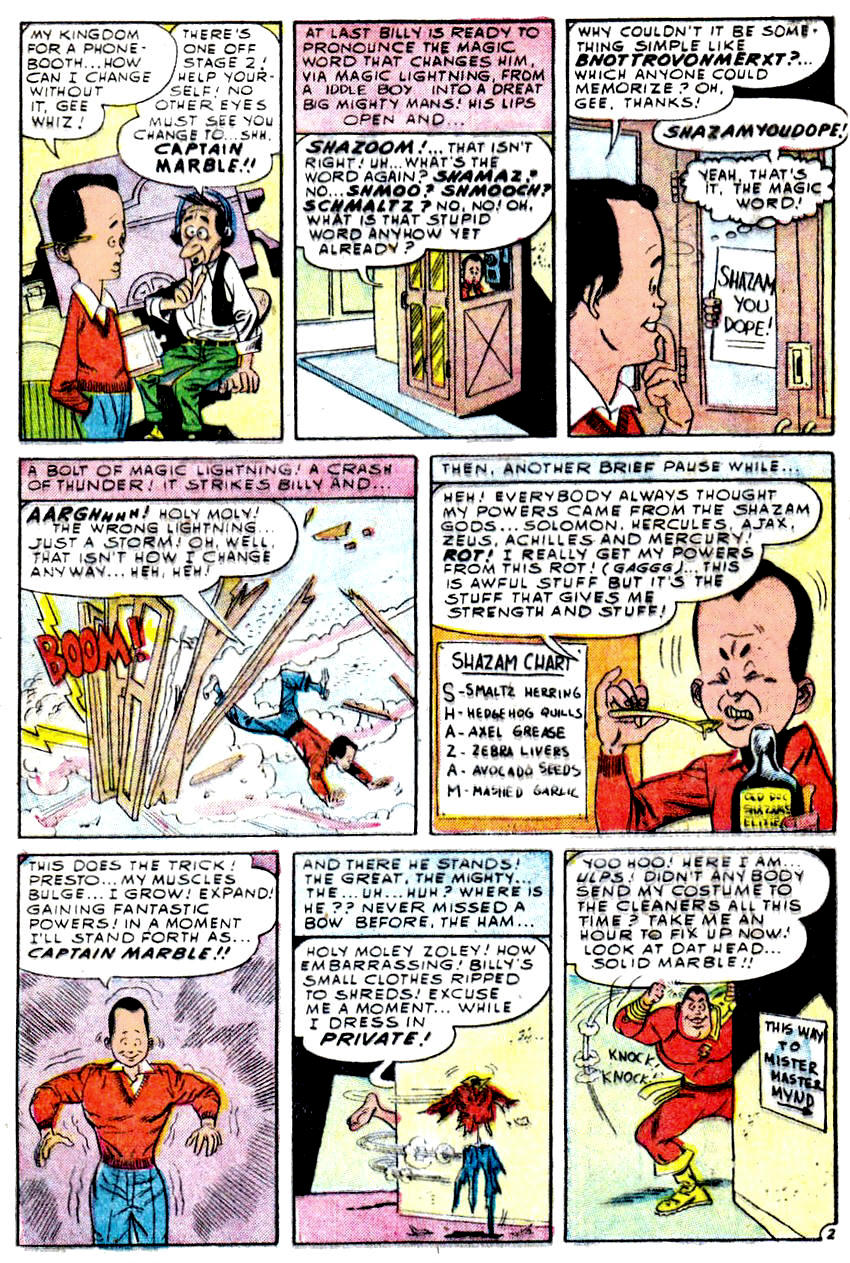 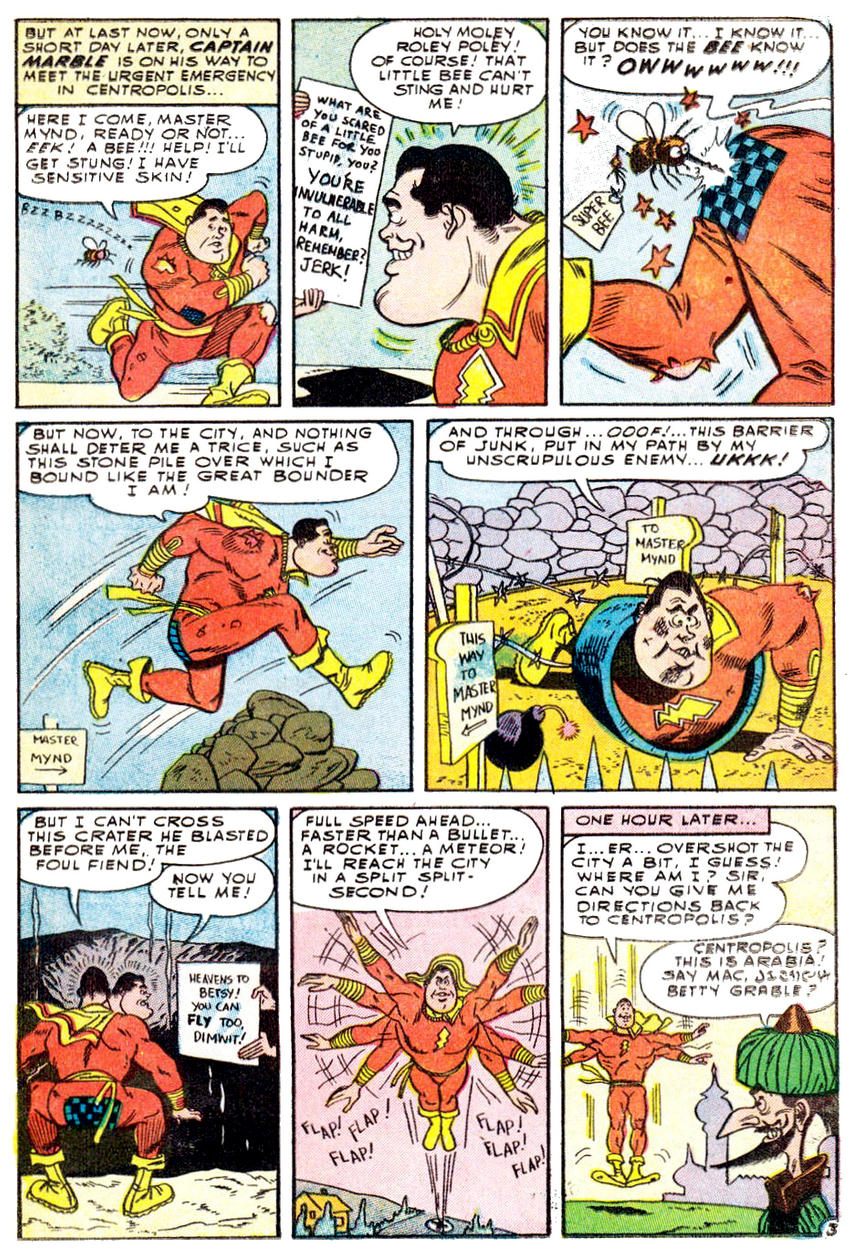 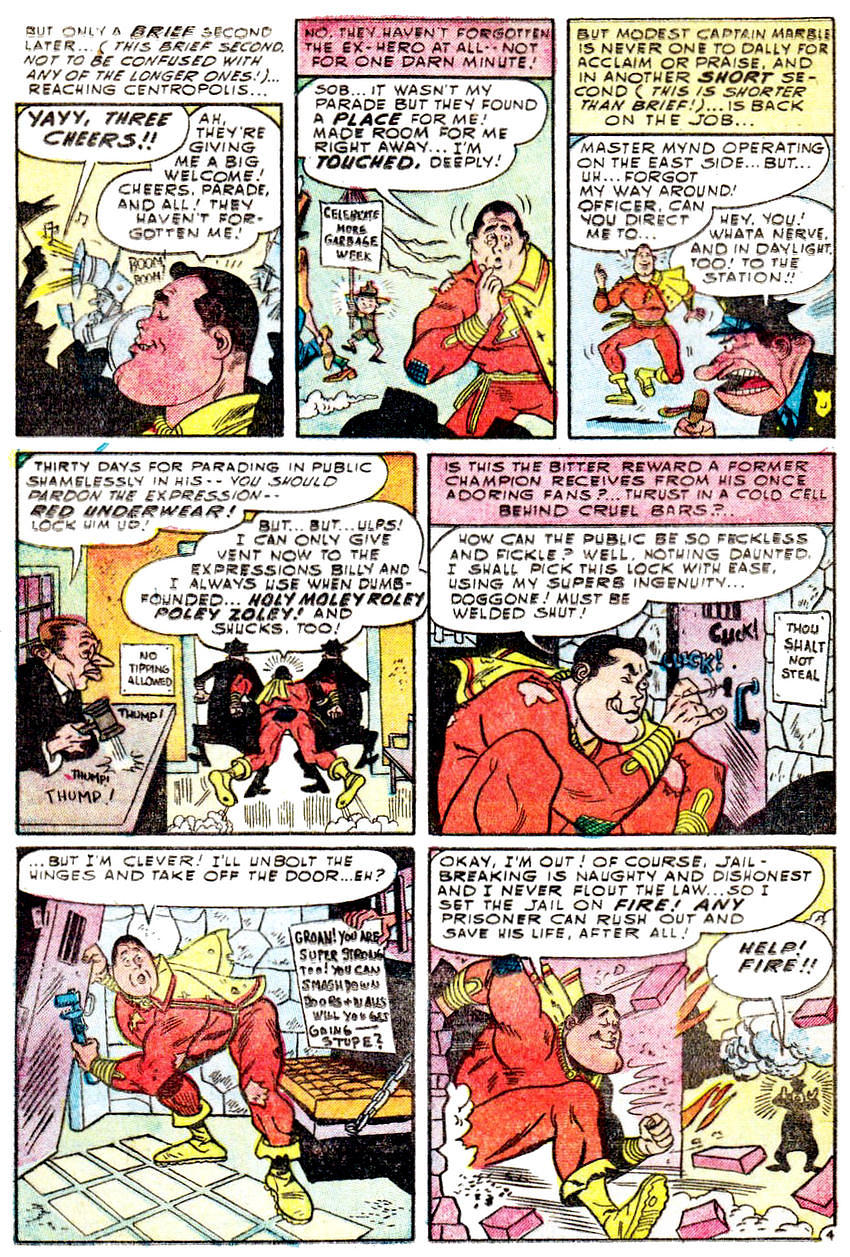 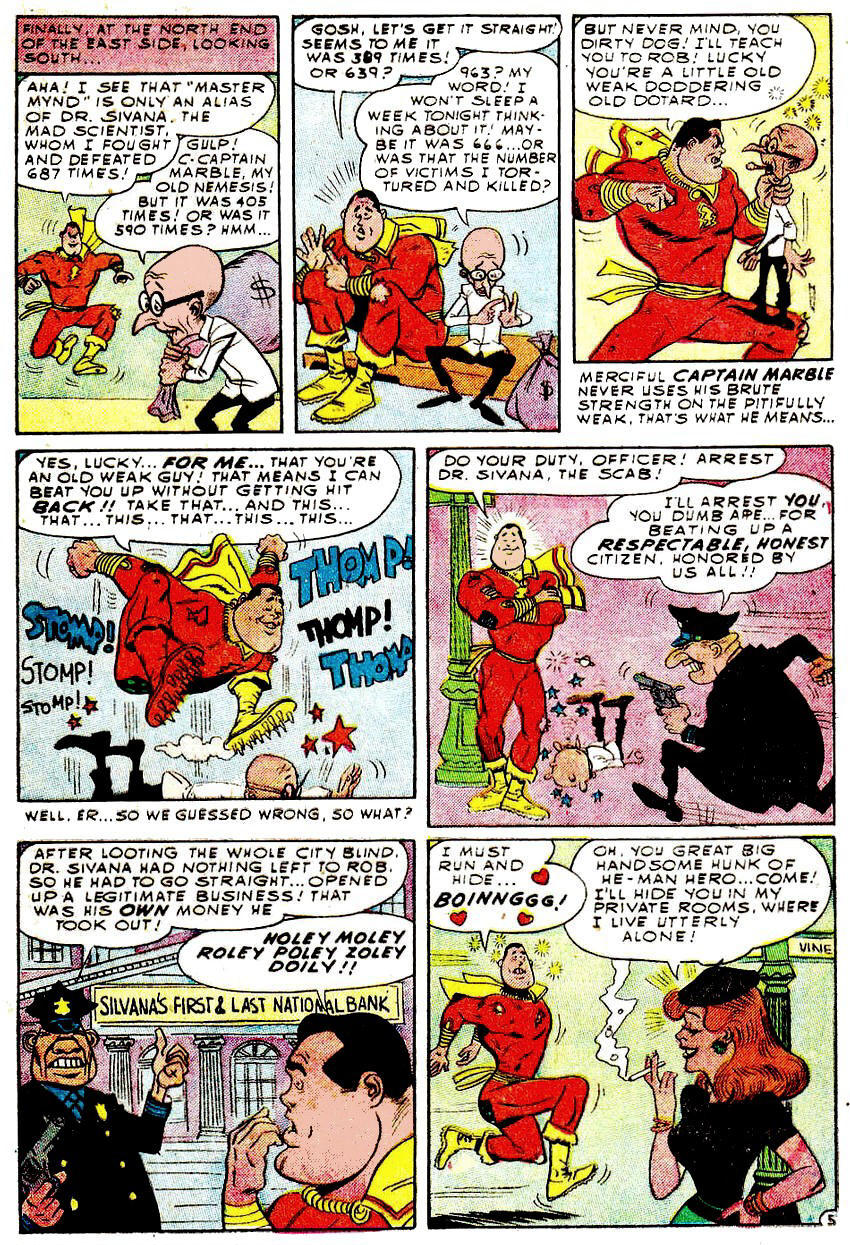 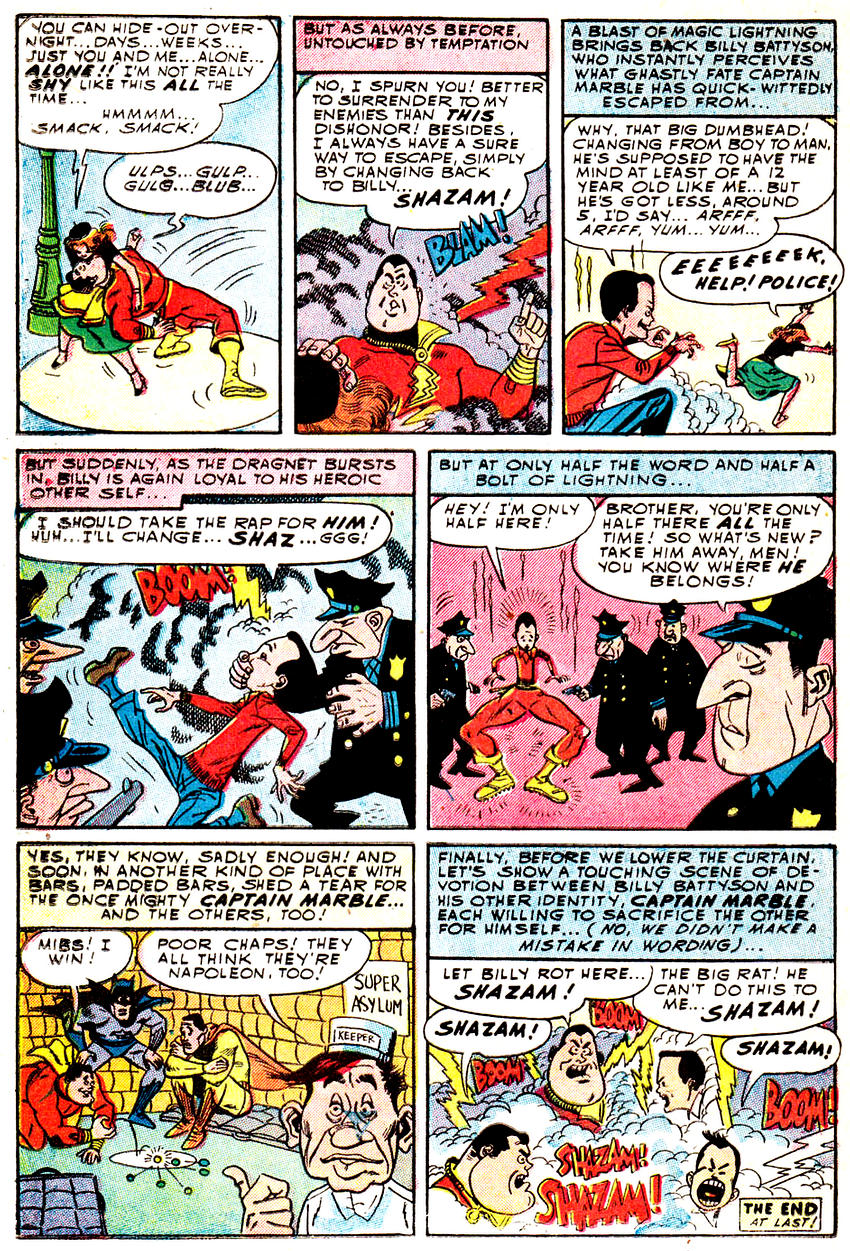 Yikes, that was absolutely psychotic, even more so than MAD's most biting satire. (Even though its art was pretty subpar, I keep thinking of MAD's "Plastic Sam!" as the gold standard, for the incident in which Plas murders his sidekick and leaves the ripped-inside-out corpse to distract the police...because he needs to clear his name from a false murder charge.)

But it's good that someone noticed back then that Sivana was brutally murdering people all the damn time yet Cap was treating him with (relative) kid gloves.

And Andru used the Classic Cap look! Like Tom Tyler in the CM serial! Sweet! Although I never liked the fancy whatchamacallits on the cape (barely touched upon in Andru's version, thankfully) I dig the sash and the understated lightning bolt in contrast to the massive torso-wide emblem Cap usually sported.

I wonder what King Kull is doing there... Robert E. Howard's King Kull, running around in the days of Atlantis, was published in 1930 in Weird Tales. I can't recall that the stories were in print in the '50s, so I suspect that the writer had a memory of reading the stories 20 years previously.

I treat Captain Marvel like I treat Plastic Man, without Binder around (and this doesn't read like him at all) -- and Cole for Plastic Man -- they usually aren't worth reading.

This is a good example. It's a silly as a Binder script, but it lacks the whimsy which made them more readable, and the panel layout is pretty hard to read.

Hopefully this wasn't Binder on a bad day!

I like the Nuts story. I have a soft spot for the gag-a-second approach the Mad imitators took. I think they refined what Mad was a bit too much (usually relying on on the joke structure) but, as you said, it has it's moments.

Angeline, King Kull was the Howard character from Weird Tales, and was a separate character with the same name who appeared in various Captain Marvel and Marvel Family stories as a villain.

Otto Binder, who wrote most of the Captain Marvel stories, was a science fiction writer under the name Eando Binder (for Earl and Otto) in the thirties and forties, besides his comic book work, and was perhaps tipping his hat to Howard's creation. He probably didn't think it mattered if he used the name, because no one would have expected anyone who read Captain Marvel to remember the original King Kull. Wrong! Your comment is proof of that. Thanks for writing.

Billy, speaking of the Captain Marvel (Tom Tyler) of the Saturday afternoon serial...there is a scene where he had a machine gun and mowed down some bad guys. If I saw that in a satire of Captain Marvel I'd think it was way out.

Humor is a subjective judgment as to what is funny. To me the Superduperman satire featuring Captain Marbles in Mad is extremely funny, but this satire misses the mark somewhere. Ross Andru did a good enough art job, and maybe I'm prejudiced because Superduperman has been one of my all-time favorite Mad stories since I first saw it in 1955 or '56 in The Mad Reader.

Brian, Grand Comics Database lists this story as being by Binder...but they are in doubt as the artist, crediting it to Pete Costanza-with-a-question-mark.

The second person narration doesn't read like Binder, but it could have been him trying something different.

Oh yeah, Serial Cap got away with quite a few things. I remember gasping when he soared up to a rooftop, grabbed a thug, and threw him to his death without a moment's hesitation. Definitely an Old Testament feller, Serial Cap would've smashed Sivana's skull like a ripe melon.

Still the best of the superhero serials, IMHO (although paradoxically I watch the Captain America one more often because it's so frikkin' awful).

Billy, I never saw the Captain America serial, but I read years ago in Screen Thrills Illustrated that they had turned Cap into a fighting District Attorney and I lost all interest in seeing it.

The truly unforgivable sin was taking the wings off Cap's cowl. Oh, horrors!

The problem was when the publishers sold the rights to make motion pictures of the superheroes they essentially gave the studios the freedom to do what they wanted with the characters. Like turning Captain Marvel into a killer.

Wow, if this was Binder, it's weird Binder. Maybe it's the strange panelling that's throwing me off, but GCD, while not always right, is a lot more right than I'd ever be. It doesn't seem to have that kitchen sink approach.

Think of it this way: Captain America was just a standard serial about a two-fisted DA battling a criminal mastermind, then someone took the script and penciled in "Grant changes into his Captain America costume and" at regular intervals.

No Nazis or spies or saboteurs, no Bucky, no winglets, no shield, no Super-Soldier Serum, and no reason to dress up. Failing constantly, Pseudo-Cap's only successes are barely staying alive himself while the villain's victims pile up around him, and finally capturing said bad guy who proceeds to reveal his secret identity to the world--making the DA hang up his comic-book cosplay gear forever.

The Batman serials get a lot of flack and deserve every bit of it (on a side note, Rifftrax has been doing a hilarious send-up of Batman and Robin--the second serial, not the Joel Schumacher mess--for a while now), but at least they tried. The guy playing Cap has no business wearing tights and the mask is hilariously ill-fitting, like a kid trying to pull a sock over his head.

Thanks for the plug!
Ah, yes, the good ol' days, when comics didn't even try to make sense or be halfway scientifically accurate! Picking up houses by a small section of roof? Sure! Fly several people clinging to a rope for long distances over the city rooftops without most dropping off to their deaths? Sure! Float a sunken city back to the surface and secure it there with flowing lava? Sure! No problem!

Besides appropriating R.E. Howard's King Kull, Binder(?) also manages to somehow incorporate the Zombies into his story, who wouldn't even have their big smash pop hit "Time Of The Season" for another ten years! See how he gets around those copyright issues?

Seriously though, the walking dead zombie angle does put this one in a different category.

As for Andru's Captain Marble, I felt it read like the broken clock that somehow does manage to hit the right mark once or twice by pure accident. Or, it was like a banana that you peel and then find it is mostly bad with a tiny bit worth eating. Or, it's like a blind date that you take out and find she has herpes simplex sores covering 97% of her mouth as she swoops in for a goodnight kiss. Or...

BTW, Otto Binder's name has been in my blog for the past two days as well!
http://apocolytesworldofcomics.blogspot.com/2014/05/robot-week-day-2-i-robot-and-i-robot.html