Number 1426: Firebrand and the Brick Batman 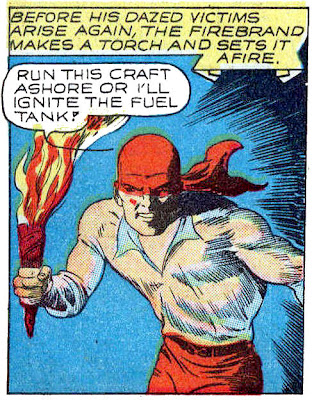 It appears that the Firebrand, who appeared on the covers of the first four issues of Quality’s Police Comics, was intended to be the star of the comic. The feature was drawn by Reed Crandall, in a style obviously inspired by Lou Fine. Crandall’s figures stiffened up in his later years, looking something like statuary rather than the fluid, action-packed poses of the Firebrand. The Firebrand’s costume looks like something between a circus performer and ballet dancer, and maybe it's the see-through tunic, or a panel on page nine of Firebrand running — which looks like Nureyev leaping — that make me think that way,

711, who is a prison trusty, apparently has his own in-and-out door, unbeknownst to the warden (who seems a little too palsy-walsy with him). It’s drawn by comics veteran George Brenner. The story features a character in a Batman cowl. I don’t know how else to describe it. It reminds me of the “bad Batman” story we showed a few months ago, which you can go to by clicking on the thumbnail: 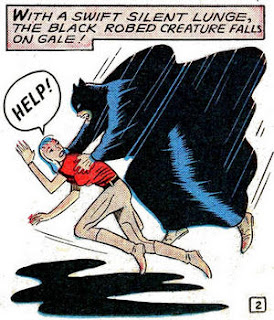 This issue, Police Comics #5 (1941) is the first issue with Plastic Man on the cover, and he kept that spot for the rest of his time in Police.

Wednesday, two more stories from 1941, this time from Fawcett. 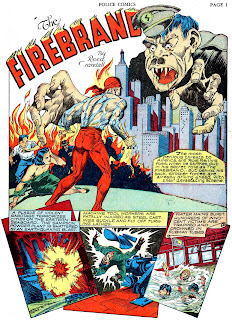 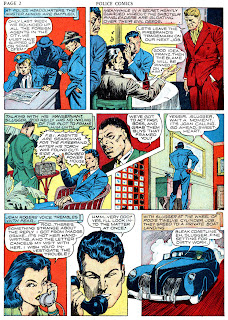 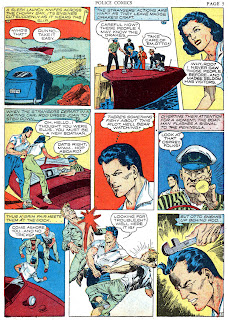 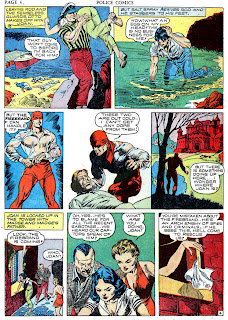 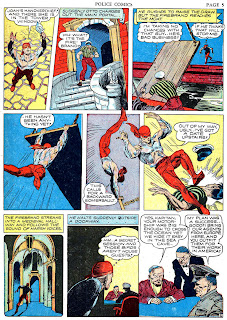 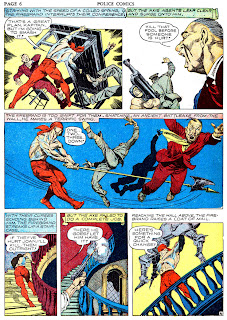 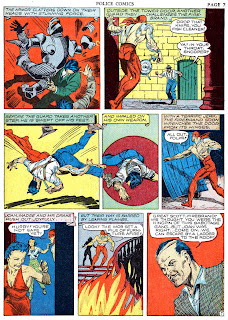 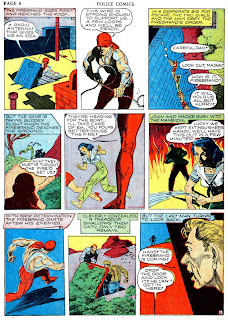 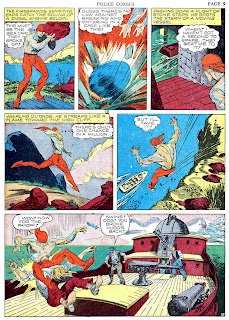 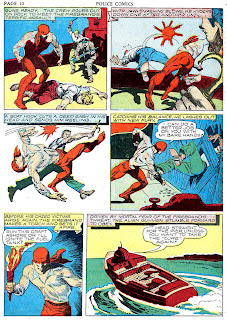 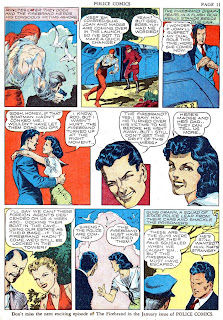 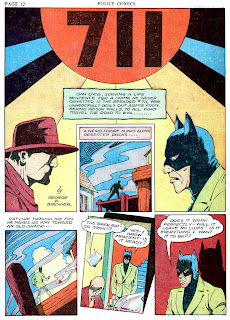 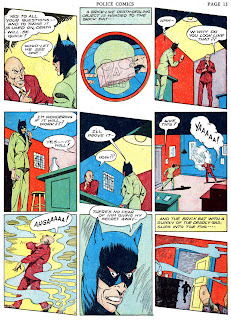 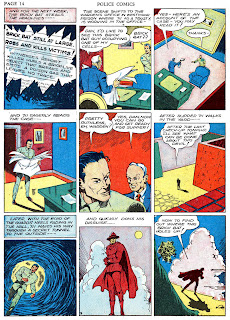 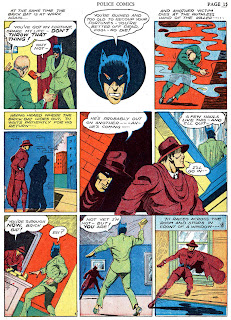 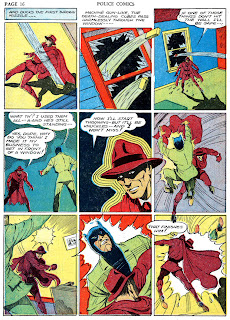 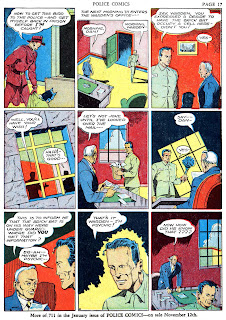 What is it with Golden Age heroes and see through blouses? Red Bee, Fire Brand, and Hydro-Man all sported the look. Is it a reference to someone in particular in the 40's or was it just a comics fad?

One thing about the golden age of super heroes is that you see the same strange mistakes over and over.

In Firebrand, why did the saboteurs frame him? He was already a vigilante, and it doesn't add anything to the narrative or play in the story in any way.

In 711, the prison angle is a good hook -- but it's unused! He run through his escape tunnel to become just another fist-swinging shadow clone.

A prisoner who can escape whenever he wants?

Combine it with STALAG 17 and you got HOGAN'S HEROES.

BlUsKrEEm, the guys who designed these costumes are all gone, so I guess your question is rhetorical. I think it's a rather impractical look, myself.

Ha, Kirk! You got it, buddy. I hadn't thought of Hogan's Heroes.

In attempting to explain the see-through blouses, I would look to the influence of Alex Raymond's Flash Gordon on the appearances of comic-book super-heroes, especially those whose costumes were designed by Lou Fine or in imitation of Fine's work.

There's an kinky eroticism — I was going to call it “underlying”, but it seems to blatant for that — to Flash Gordon, and one of its manifestations is in costume. Not being an expert on Raymond, I don't have an explanation for that eroticism. But it got passed on into the comic books, sometimes attenuated, and sometimes amplified. Granted that I don't recall anything see-through on a male character in Flash Gordon, but I regard this as just an amplification.