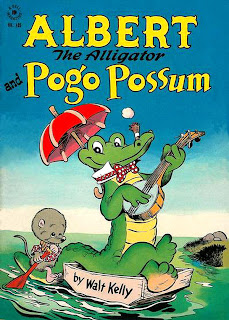 
"Ah swoons to think of how Albert will be outdid."


Time for our Glee and Perloo Society meeting. Welcome to those of you who showed up.

Albert and Pogo give another lesson, drawn by Walt Kelly, in how to make us laugh. This strip appeared in Dell Four Color #105, Albert the Alligator and Pogo Possum. It's an unwieldy title, which Kelly mercifully shortened to just Pogo, when Pogo became star of the strip.

The story is set in Swampy Lagoon, rather than Okefenokee. Pogo and Albert, and the only human character, Bumbazine, here playing the part of "Mister Engineer," are the only characters in this strip we recognize. The others are just character actors and extras, none of them part of the regular strip a few years later. Like Michael Jackson, Pogo had his nose bobbed a few times, and his appearance changed much before his final version. This ratty-looking creature is a real possum (actually an opossum), the only North American marsupial: 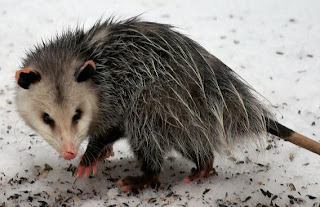 Kelly had to do some work to cute up a critter like that. Albert stayed pretty much the same from the beginning, with some modifications over the years. If an alligator could be made cute, then Kelly did it. 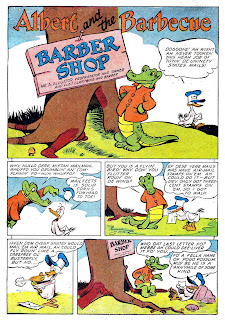 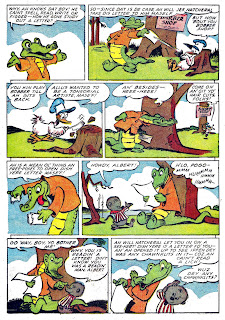 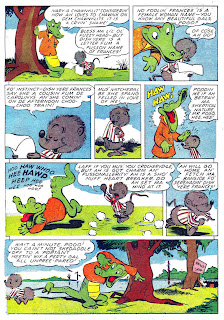 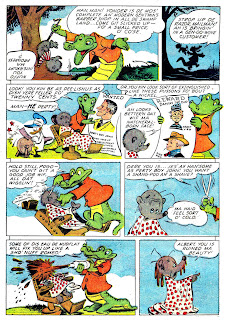 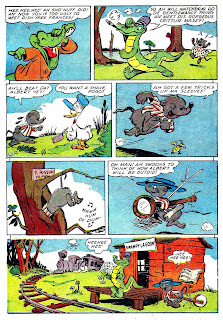 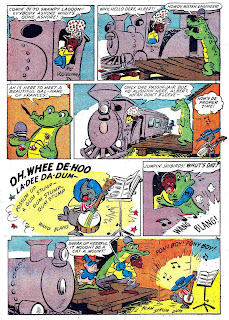 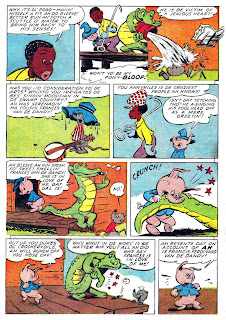 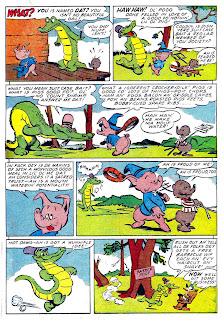 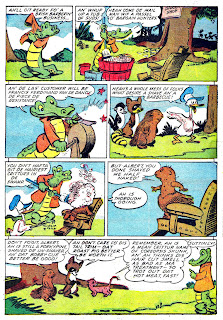 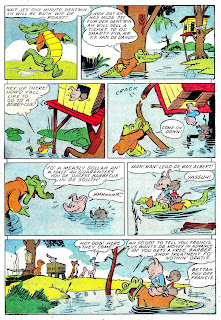 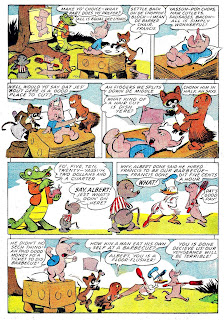 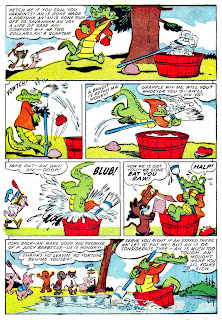 Pappy: Pogo was certainly the whole package: drawing, inking, writing, perfect composition - just everything. It is hard to decide which facet of Kelly's genius I appreciate most - for me it's a tie between his gorgeous inking and his brilliant dialogue.

As you mention, everything is cute without being saccharine.

Mykal, I've always found it interesting that Kelly could take a strip out of a children's comic book and turn it into the hippest, coolest comic strip of the 1950s just by injecting politics. He didn't change his writing style, and the characters evolved in looks, but his drawing was essentially the same (that gorgeous inking you mention). What came later in Kelly's career in newspaper comics is part of what fascinates me about his early work in comic books.

In addition to Pogo and Albert, the mailman duck also made the transition to the comic strip.

Thanks, Kirk. I forgot about him; did he have a name?

I never thought he had a name, but I just checked on Wikipedia and it's Choo-choo Curtis.