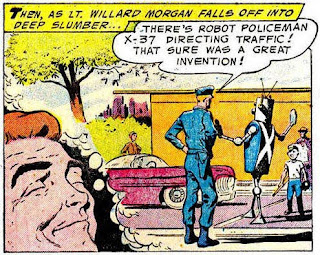 
This short strip from Gang Busters #51, 1956, "The Detective of Tomorrow!" is prescient about advances in fighting crime, or even speeding motorists. Using a humanoid robot as a Photocop is cute for 1956, but in the Twenty-First Century the real Photocop is a camera designed to nab you in the act of speeding or going illegally through a red light.

The story, drawn by Ralph Mayo, is extrapolating based on technology known 55 years go, and is way too optimistic that crime will be eradicated by technology. What we have found is that technology can breed its own kind of criminal. We've also found that much technology is going through a period where society has to decide if its intrusiveness goes over the line from a right to privacy to protecting the public welfare. Like, I hate Photocop. If I'm nailed for speeding, let it be the old fashioned way, by a human cop. 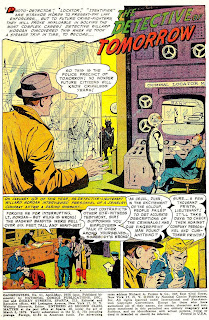 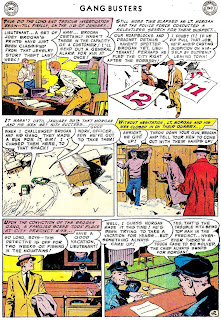 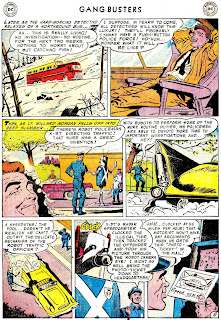 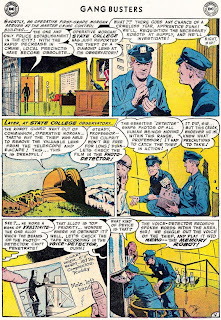 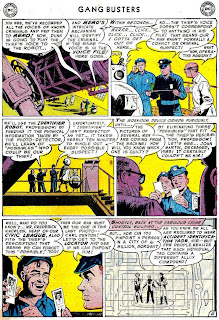 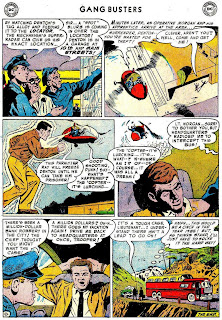 An issue later, in Gang Busters #52, a public service announcement itself extrapolates the future. In this case 1976. Allergy sees himself hawking tickets on rocket ship rides. Tourism in space is still quite a ways off, although people like Sir Richard Branson are working on it. There is something special going on in the panel with the girl: a young woman has made a medical breakthrough, rare to show in the days of stay-at-home moms and few working professional women. She's communicating through what looks like a flat panel computer monitor. Now that's prescient. But then we get to the panel with Tom, who might "invent something for those big electronic machines." Uh, yeah, Tom, they're computers. If you want to work on them you should learn what they're called. He's also being congratulated by a Richard Nixon lookalike. 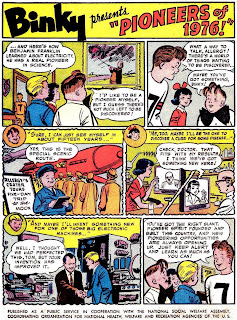 Odd that once utopian views of the future can have an evil slant when it's the present, or even the past.

Excellent! The public is sold on RFID tracking of everyone, in the guise of a mandatory “Accident Identification Tag”!

CCTV's now being used over here in the UK to harass young people by means of disembodied electronic voices for daring to stop and talk to each other on a public thoroughfare, while the likes of old people're finding petty bullying local officials're using the same technology to track them down and fine them for 'littering', when what actually happened was they'd civil mindedly placed somebody else's litter in the bin only for a breeze or a seagull to knock it back out, making them by default the last human 'owner' of the litter and therefore liable for a hefty fine.

Such petty officials even use anti-terrorism laws in conjunction with more sophisticated monitoring technology to spy on what people put in their bins to identify whole new kinds of misdemeanours and suitably punitive fines, (which they themselves receive a cut of for collecting).

I'll leave you to decide if British people were to rise up in protest at any of this, whether our government'd hail them in the same way they do the Libyans for shaking off Gaddafi, or whether they'd dole out the Saudi style treatment of the Bahrainis.

The only good point for me is my daughter was only 14 when she was shocked to realise ALL politicians lie through their teeth to get their way, whereas I was well into my 20s before I realised that applied even to 'my' side.

Borky, your story of the disembodied voice telling kids to disperse calls George Orwell to mind. On the one hand technology is a tool to protect the public against terror and crime, and on the other it becomes the voice of a grumpy grandfather in another room telling kids to shut up. For the record, since I'm not a criminal and have no predeliction toward wreaking terror and havoc, or even criminal acts like shoplifting, I don't feel the need to have my every public move documented somewhere on camera. But like most citizens I grudgingly accept it in the name of "public safety," even though I feel personally that it is intruding on some right of privacy, however vague that term may be.

Being watched works on two levels: it keeps honest people honest, and it can be a great tool to catch criminals. But there's a whole big fat gray area of discussion going on about having privacy disrupted unnecessarily. As the technology improves it will get worse, I'm sure.

I can see why you'd complain about getting a ticket for littering after being observed on CCTV. That seems to be overkill, a nanny cam set up not to document a specific person engaged in a specific criminal act, but for harassment of the public.

Thanks for sharing this! I’m delighted with this information, where such important moments are captured. All the best!