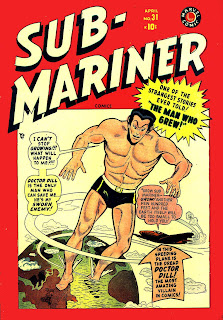 
I've got some Sub-Mariner stories here that probably aren't what you think of when you think of this classic character.

First we've got a version attributed by the Grand Comics Database to Al Gabriele, from Sub-Mariner #31, 1949. This is a very wacky story, close to the end of Sub-Mariner's 1940s run. Second we have a version by Bob Powell from 1954's Human Torch #36. This could be an inventory story, in case regular Subby artist Bill Everett was late or missed a deadline. As much as I normally like Powell, his visualization of the character seems wrong.

Finally, the Sub-Mariner that isn't. This Tony Mortellaro-drawn story looks like Namor. It's from issue #1 of Adventures Into Mystery, 1956, produced during a period when Sub-Mariner was in limbo. His comic had been canceled, and he was still five years away from being revived in Fantastic Four.

Scans for these stories are provided by Pappy friend-contributors John Kaminsky and Jim Sharpe. Thanks, guys! 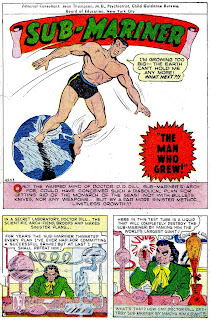 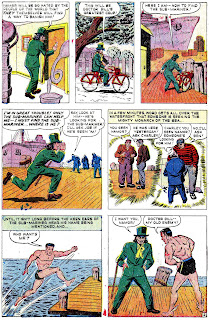 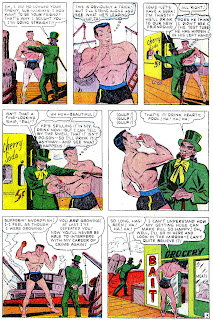 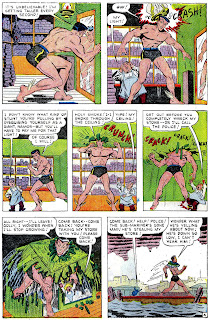 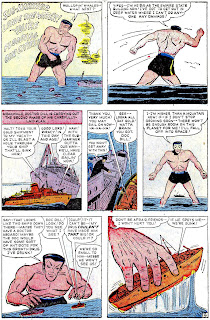 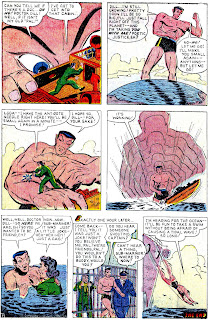 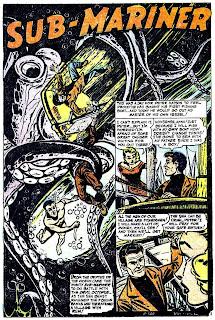 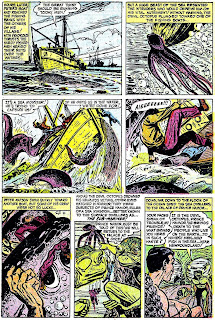 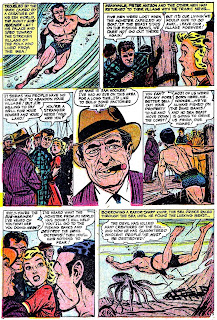 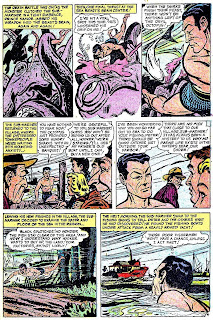 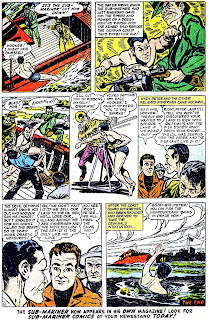 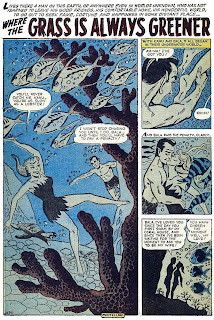 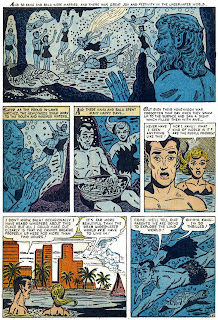 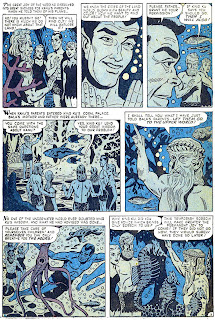 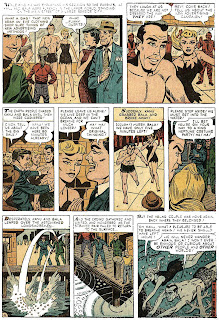 Hahaha. Great minds and all. I did that first story on my blog just two days ago.It IS a bizarre one, isn't it? I love these odd Subby stories!

Wow, Steve...that has happened enough times that it makes me wonder if we're all on some sort of cosmic comic blogger wavelength. "Oops, I feel a psychic vibe from Booksteve comin' in!"

Seriously, though, I work 60 posts ahead...I am right now scheduling posts for the first week of July, and did this Subby posting in early December, so the timing of the two appearances was coincidental, but interesting nonetheless.

Just means I'm the one picking up on you I guess! :)

I plugged yours and mine on my I.T.C.H. column this morning. You can never have too much Golden Age Namor!

So, Steve...what card do I have in the sealed envelope in my locked desk drawer, in the Vault of the Crypt of Pappy room in my basement?

What's that you say? Jack of Clubs?

Man, you are amazing! No wonder our blogs are crossing over; you're reading my mind. Heh-heh, I will have to be more careful to pull the shades on some of my thoughts.

Thanks for the plug. I notice on Stat Counter that my numbers go up when you give me a link.

The first one I liked: it reads - and to me looks - like an ancestor of the early X-men comics.

The third one? Jeez! Normally artists find females problematical but this guy makes a fair hash of the gal - it's Subby where he plunges the depths!

He manages to make him look like a balding overweight Jim Carey - at the point in his career when he's reached the Charlie Sheen stage!

I suppose in his defence's the fact even drawn by the best artists Subby always comes close to looking like a wasp-waisted transvestite with old fashioned drawn on plucked eyebrows, so he was probably trying desperately to avoid going astray in that direction.

The first one put me in mind of Tex Avery's King-Sized Canary". I liked 'em all, though. I'm not very judgemental when it comes to the Golden or Atomic Ages...to me they're all great. Just the creative folks figuring it all out.