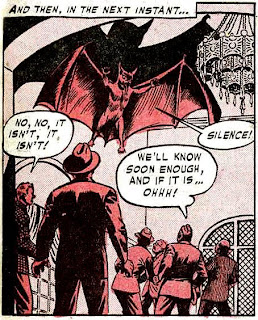 
If you don't know Curt Swan's work at DC, then you probably didn't follow the Superman line of comics for decades, where Swan was a star. His work stood out. He was an artist who came into comic books after World War II, drawing Boy Commandos stories. Later he drew Superboy and Jimmy Olsen, and then became the Superman artist. He worked mainly as a penciler, and just about every guy who wielded a brush for DC inked his pages.

In the early '50s Swan did these "horror" comics for DC's House of Mystery. DC's technique was to make it look like a horror comic, while the stories ended up with non-supernatural denouements. To be honest, the rational explanations to the mysteries in these four tales, all from 1952, are almost harder to believe than if they'd given a supernatural reason for the goings-on. "The House Where Evil Lived" is from House of Mystery #3, and was inked by Stan Kaye. "The Tell Tale Hand" appeared in HOM #6, inked by George Klein. "The Devil Was My Partner" came from the same issue, but GCD didn't identify the inker. "The Grim Jester," inked by Ray Burnley, is from HOM #8. 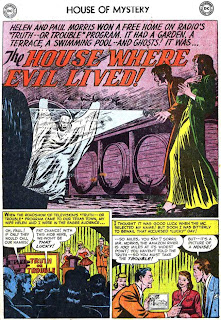 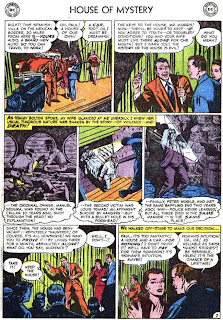 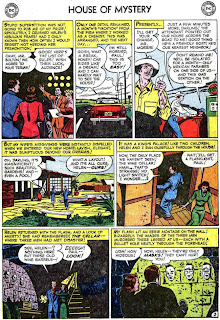 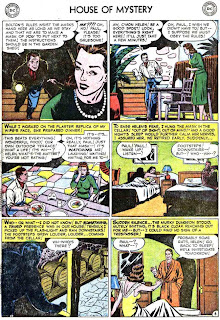 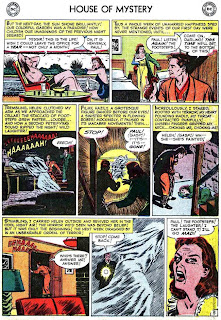 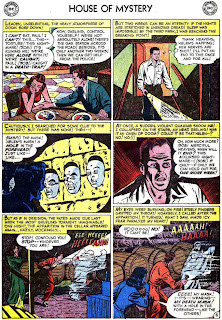 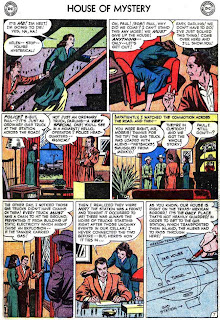 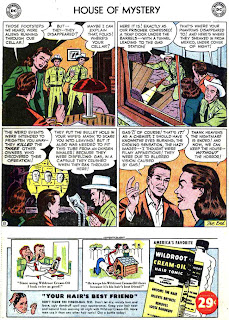 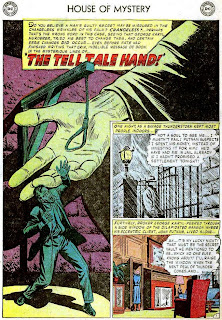 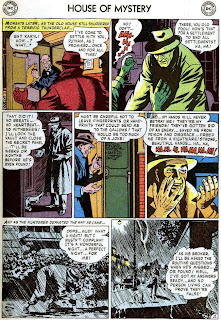 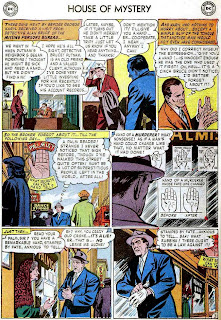 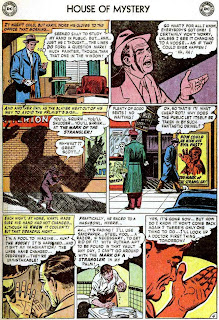 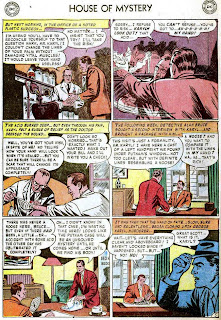 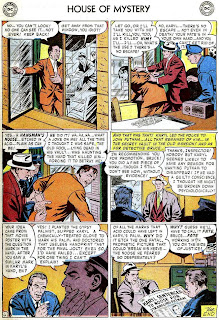 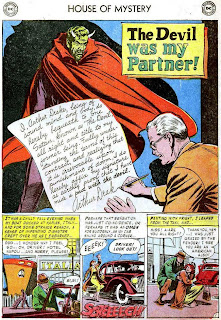 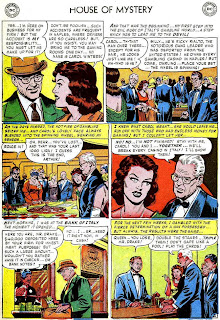 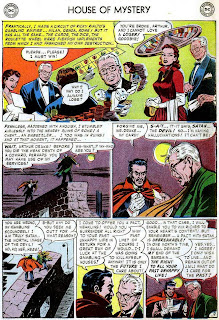 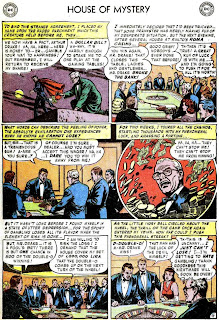 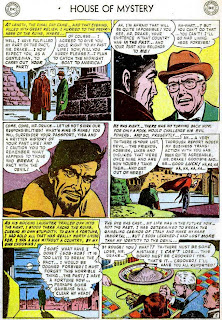 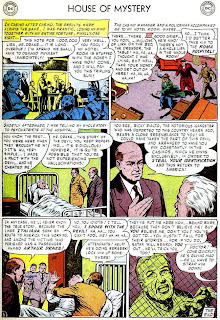 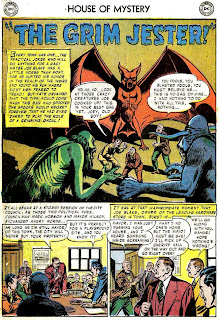 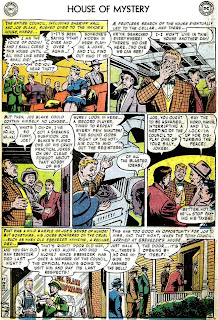 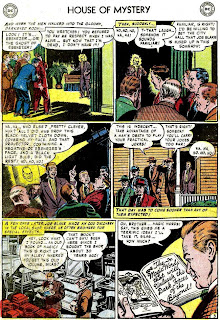 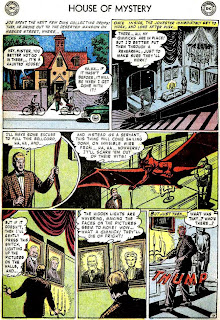 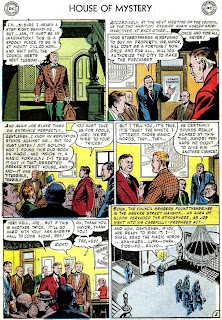 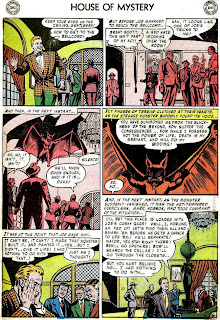 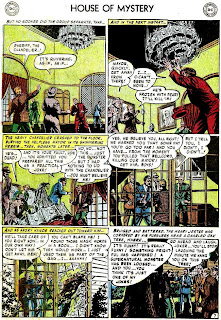 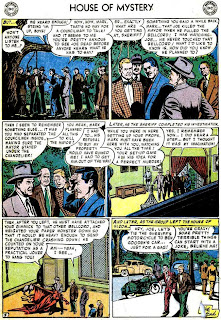 Curt Swan is one of my all-time favorite comics artists, along with Carl Barks, R. Crumb, and some others.

All four of these stories are stories I had not read before. And, they fall within the early portion of what I would consider to be Swan's prime (50s-early 60s.)

I wish DC would publish a "Swan Library" along the lines of the Barks Library collection.

No offense, Curt Swan was very professional, but he sort of defined the "deliberately boring" style that caused DC to be overtaken and surpassed by Marvel. I was a DC fan but only read Superman if someone gave it to me for free. I used to accidentally call Swan "Wayne Boring" alot, although Boring's art was usually less boring than Swan's.

Swan's art, to me, always looked like it was drawn by a businessman.

Peter, No offense given, none taken.

As an adolescent in the early '60s I was a fan of Marvel's action-packed comics, and dumped the more staid DC. After a while (I was going to say "after I grew up" but that still hasn't happened) I got tired of the endless fistfights in Marvel Comics.

Nowadays that "deliberately boring" DC style looks much better to me than it did at the time.

Boring's work is too stylized for me, as is Kirby's, Buscema's and most of Ditko's (I do love Ditko's Spiderman, and to a lesser extent his Blue Beetle, though.) Shaffenberger, Mooney, and Anderson are also too stylized for my taste. Goerge Papp or Al Plastino might be termed deliberately boring.

What appeals to me in Swan's work is the extent he got into the fantasy worlds he depicted. Swan didn't do the exaggerated expressions of the Marvel house style, but rather went for realistic body language and facial expressions. While Papp, Plastino, Shaffenberger and the others seemed to be merely illustrating scripts, Swan seemed to come closer to interpreting scripts--collaborating with the writers in visualizing a believable story world.

Barks, Crumb, John Forte, Matt Fox, Basil Wolverton, and Fletcher Hanks are not so much stylized as they are primitive. Each of these primitives might not have been doing work that was realistic, but it was deep into their fantasy worlds, and represent the closest to reality that they seemed to be able to get.

Hack work that consists of doing the least you can get away with and still get paid is not what I want to read.

Swan was no hack. His work wasn't so wonderful in the late-70s, 80s, or 90s. However, that may have been due to the inkers he got in that latter period.

I love Swan's style too, I'll take subtle and boring over bombastic and loud anyday, especially in light of keeping the strength of the storytelling as the emphasis, which not alot of artists can/could do in comics when a drama-driven plot is short of action. More than anything these four fine Swan examples remind me of color storyboards of films from the 40's or 50's. Thumbs Up, Pap!