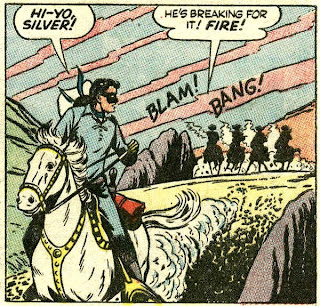 
The character of the Lone Ranger is as iconic as Tarzan, Sherlock Holmes or Superman. Crank up The William Tell Overture on your stereo and ask people what they associate with that stirring theme. He was created by George W. Trendle and writer Fran Striker for radio almost 80 years ago, then branched out into movies, TV and the comics. Dell had the Lone Ranger franchise for a long time, especially during the height of the TV show's popularity. 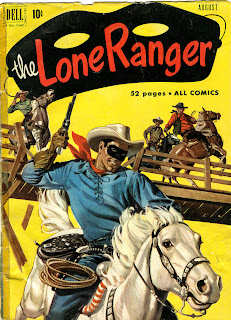 Artist Tom Gill based his comic book Lone Ranger after actor Clayton Moore, indelibly identified with the role.* Tom Gill was a longtime comic book man, born in 1913. He drew comics for decades, and a whopping 135 issues of The Lone Ranger. A good run. He was also a popular art teacher. He died at age 92--another good run--in 2005.

This is the lead story from Tom Gill's first issue of The Lone Ranger, #38, when the comic went from reprints of the Lone Ranger newspaper strip to original stories. It was written by Paul S. Newman, who also had a good run as the longtime writer.

Gill's art and layouts were clear and the stories moved along briskly. The Lone Ranger of the comics had the same strict moral code as he exhibited in all other media. He may have shot a lot of guns out of outlaw hands, but he never killed anybody. Well, hardly ever, I think. I'm sure there were some owlhoots in those pre-antibiotic days who may have died of sepsis or complications of the proverbial "flesh wound" inflicted by the masked man.

In this particular story, the Lone Ranger takes a chance, leaving his buddy Tonto in a mine amongst killers. He says he'll have time before Tonto gets killed to make sure a lady doesn't sell out to the bad guys. Good thing the Lone Ranger's timeline worked out or Tonto's good run would have ended right then. 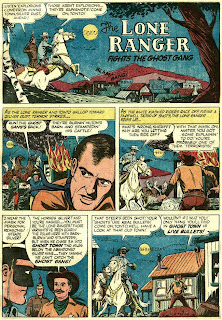 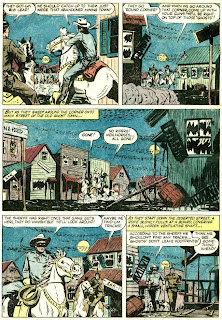 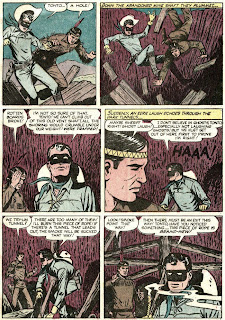 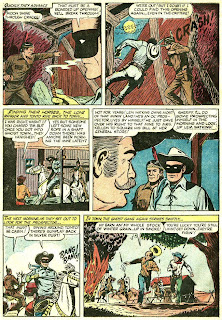 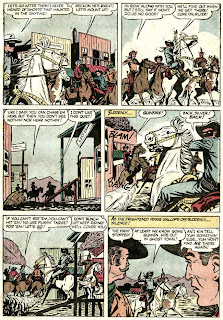 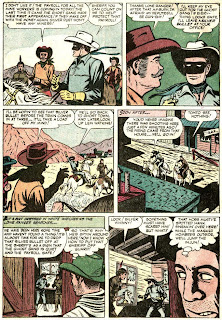 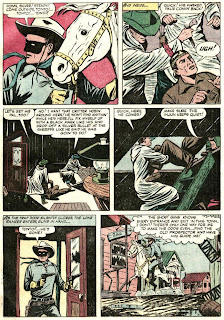 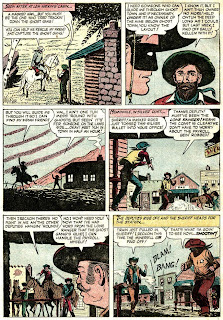 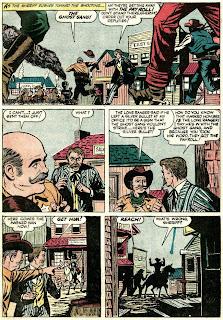 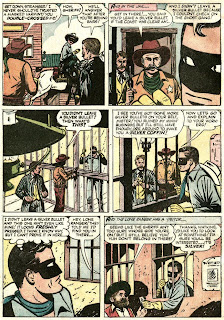 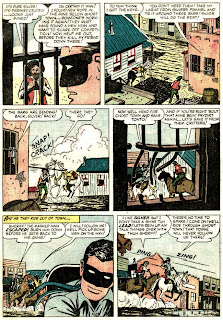 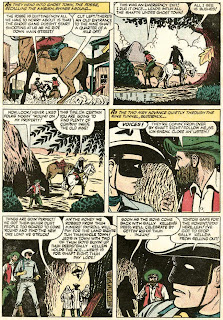 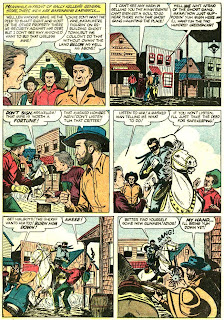 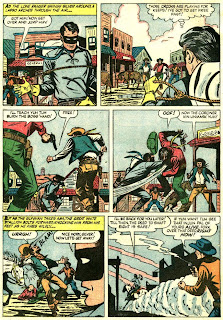 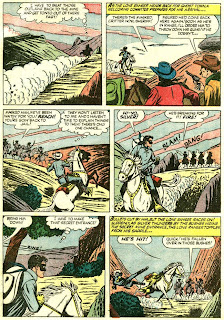 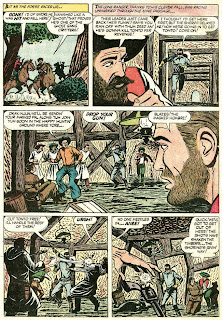 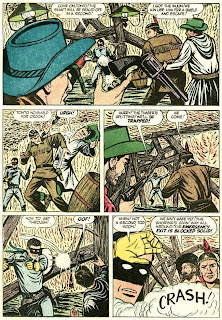 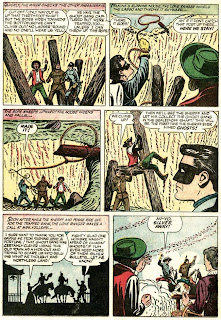 *I saw Moore signing autographs at a store opening in 1970, a memory I cherish, even if I the size of the crowd kept me from getting close enough for an autograph.

Holy coinkydinks! I just posted a Lone Ranger story over at my Western comics blog. Sadly, my only Tom Gill LR has a tear through the first half of the issue, I hadda settle for an uncredited 70's issue. I'm going to add a link to this fabulous example of Dell Lone Ranger! Thanks for posting it, I haven't read this one before.

Ghost Who Blogs: Post links for your blogs here. Thanks.

Pappy: Wow! Okay. I didn't want to put them in my comments, because I didn't want you to think I just wanted to plug my blogs, but I'll take the offer!

There's "Once Upon A Time In The West In Comics":
www.westerncomix.blogspotcom

and "The Ghost Who Blogs"
www.falkonthewildside.blogspot.com

Thanks again, Pappy! I plan to post some more links to some of your Golden Age western comics soon.