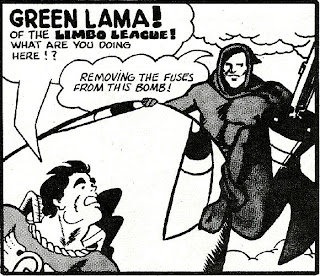 
The late Alan J. Hanley was a talented cartoonist/writer who self-published in the 1960s and '70s. He loved Captain Marvel and funny animal comics of the 1940s, and his comic strips are nostalgic pastiches of that era.

"Goodguy" is from his magazine, Comic Book #6, from 1974. It's the second part of a story, but mostly self-contained, so you can figure it out. Hanley could be didactic, but was still entertaining when sharing his political and moral views. In this strip Goodguy and Green Lama of the Limbo League discuss sex and violence in the comics while Goodguy is strapped to a guided missile headed for Disneyland! 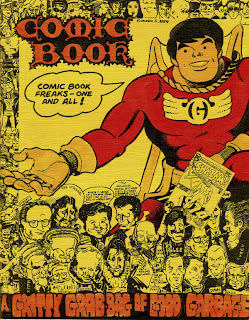 Hanley died tragically young. His friend and contemporary, cartoonist Jim Engel, wrote of Hanley in an e-mail to me:

Alan Jim Hanley (he was going by "Alan" when I first met him in person in--I THINK-- 1970. Later he went more by "Jim") was both a friend and cartooning idol of mine. I thought then (and still do today) that his work was just the greatest---both (as you said) modern and nostalgic all at once. Goodguy, The Mitey Buggers, The Spook, Captain Thunder, All-American Jack (I love Goodguy, but my single favorite Hanley story is, I think, "BACK ON THE TRACK WITH ALL-AMERICAN JACK") were all just perfect by my standards. I wrote a memorial thing about him in THE COMIC READER when he died, and I'm pretty sure I said something like "there's nothing I would have liked better than to do the kind of wonderful stories he did", and 27 years later that's STILL true. I had somebody scan a picture I took of him at the San Diego Comicon in 1977. The hotel screwed up our rooms, and Jim, Chuck Fiala and I were given a big suite to share. That was Jim's first time there. On the easel that's Goodguy shouting "Good Garbage!", and Pogo and Albert as Batman and Robin. 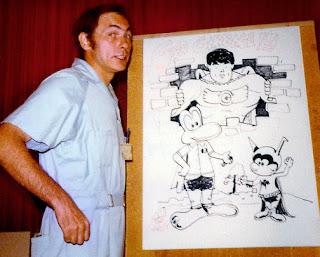 He died in the winter of 1980. He'd driven into the small town he lived in to get his morning coffee and mail. On his way home, his car went off the road and hit a tree. They think he'd blacked out, and the day before he'd complained of a headache/pain . He had a wife and two small daughters. He was 42. Jim's funeral was in a small town called Tomah, Wisconsin, which had cool old metal signs on the lamp posts that pictured Walt and Skeezix, and proclaimed Tomah as the birthplace of Frank King. Chuck and I thought that was kind of appropriate... I often wonder what he could've/would've done in later years if he'd lived. I'd have loved to done some collaborating with him for real as I got better as a cartoonist in those years. 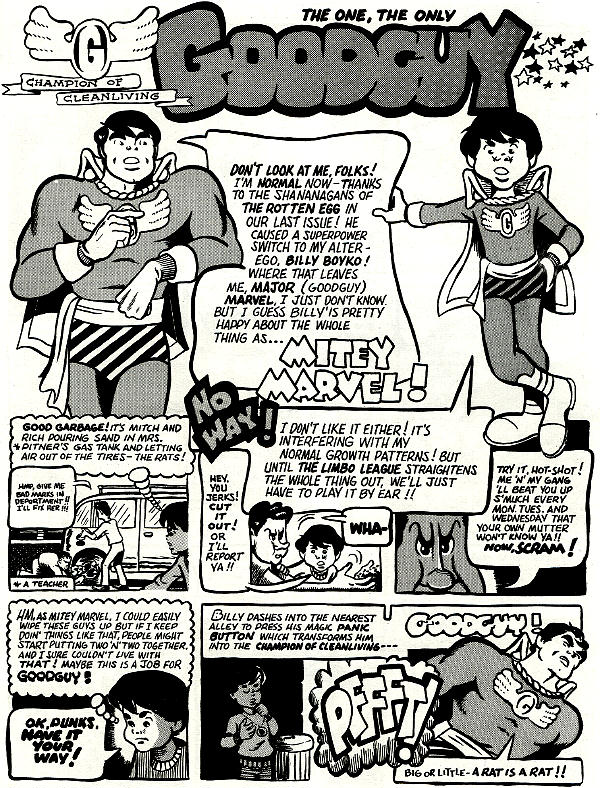 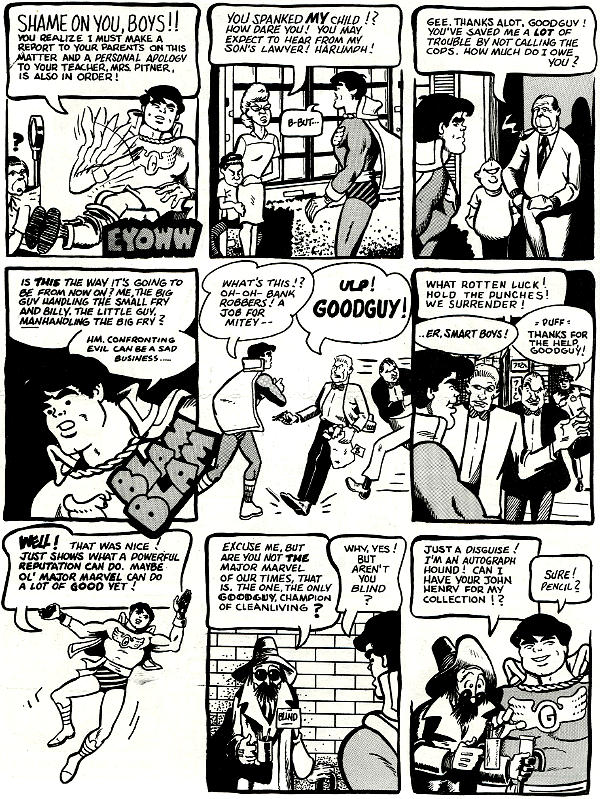 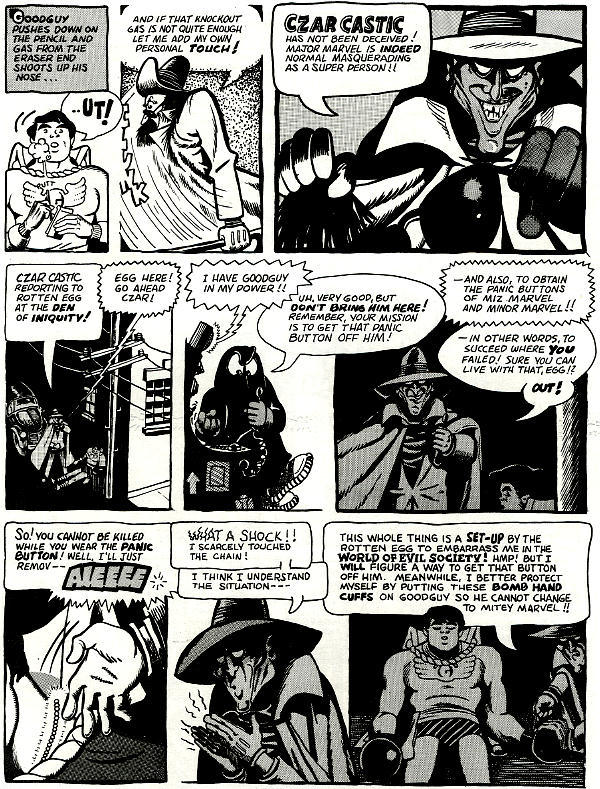 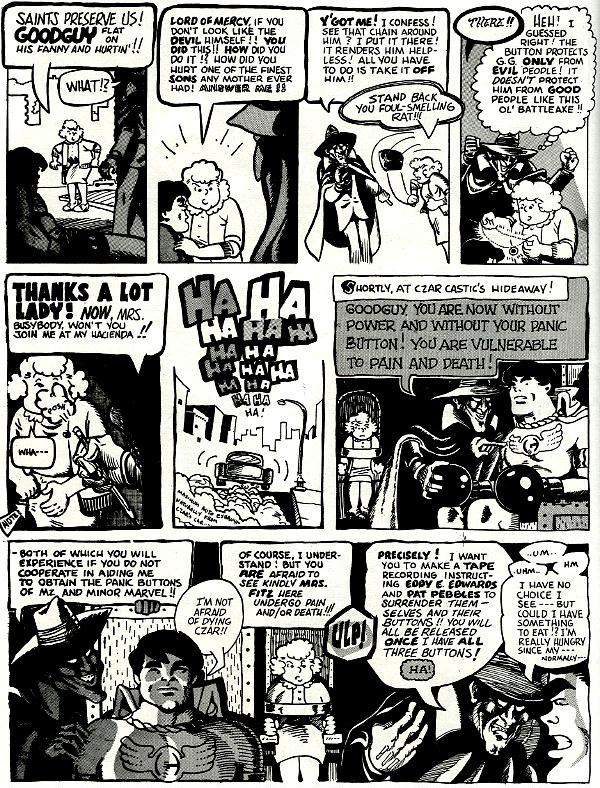 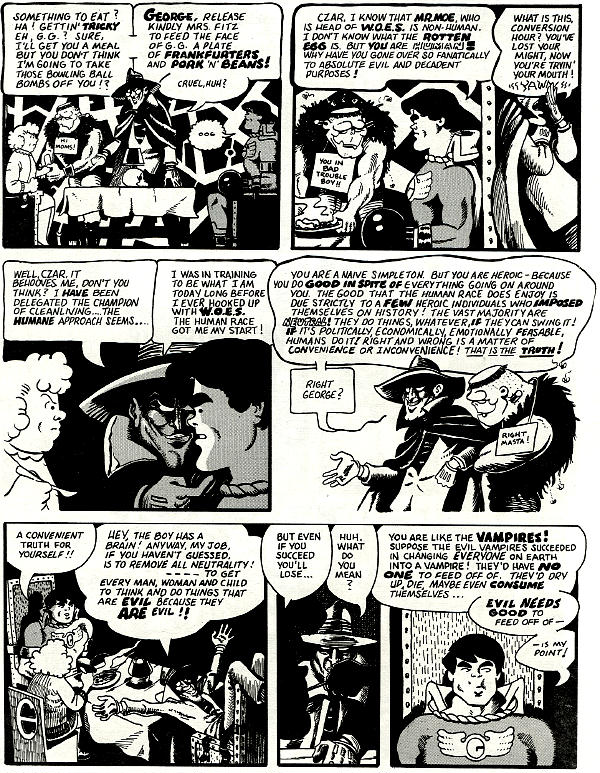 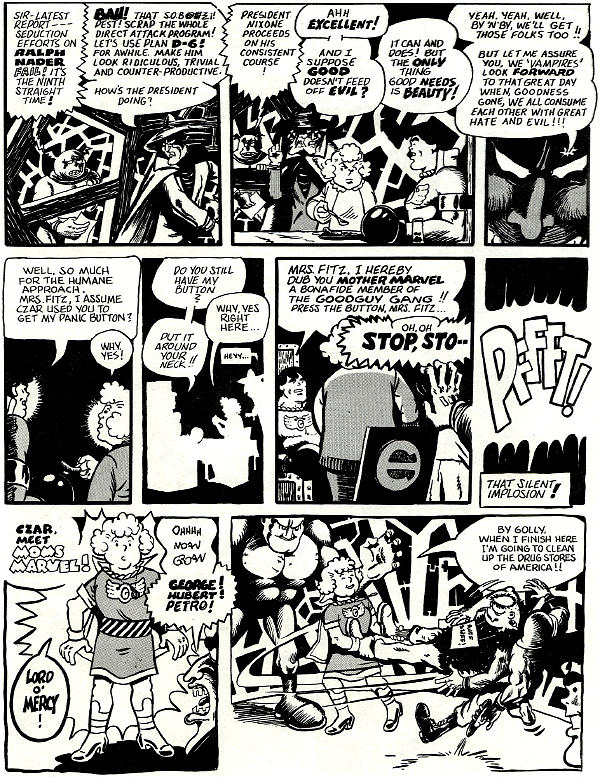 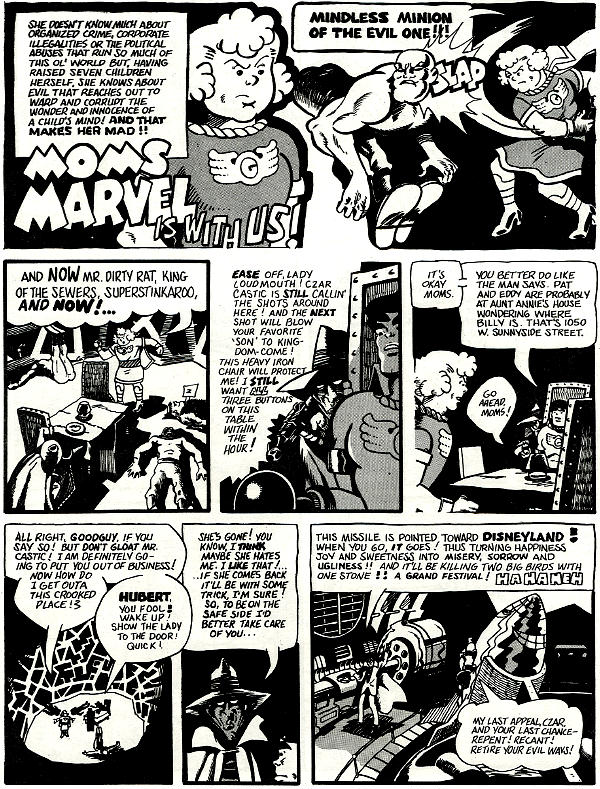 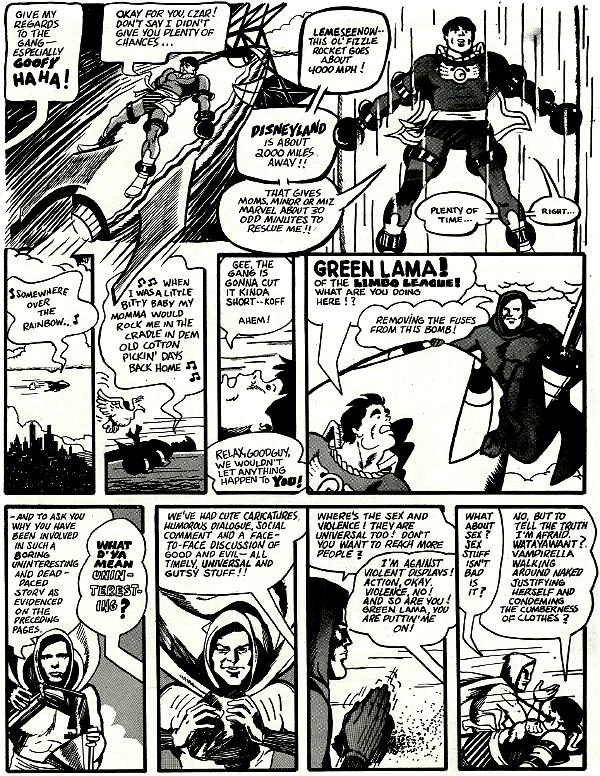 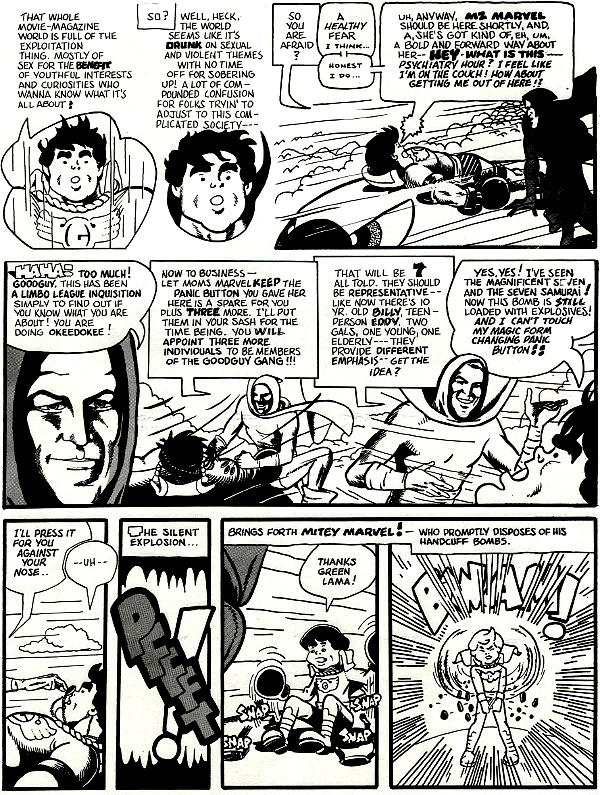 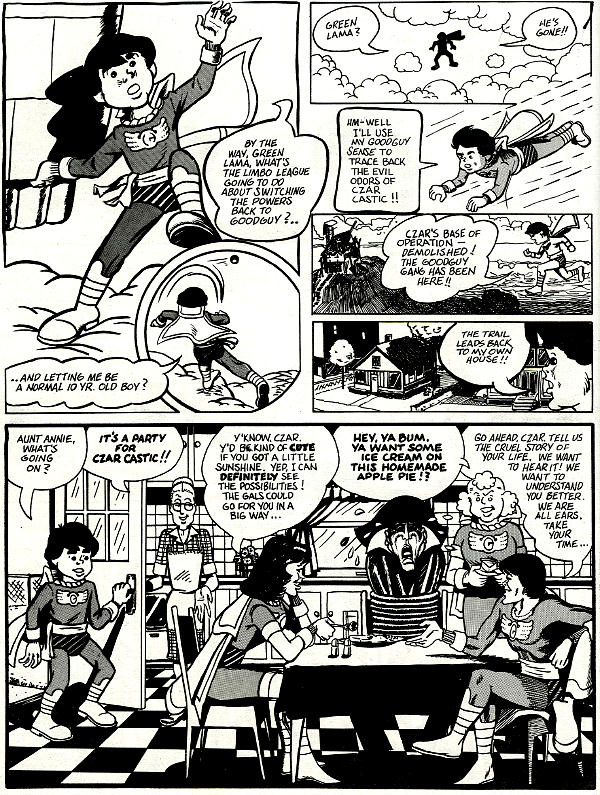 I was glad to come across your blog, via a Google Alert I use to keep track of mentions of the store. While I was never as close to Alan Jim Hanley as his Chicago fan firends, I did correspond with him and met him at the two New York Comic Art Conventions (the ones then run by Phil Seuling) he came to.

While his first name was Alan, he had always been known as Jim among his family. His fandom work was usually attributed to Alan Hanley, by fans who didn't know that he preferred to be called Jim.

Presumably, Jim Engel called him Alan at first, because that's how he knew him from his published work. After meeting him, calling him Jim would seem more natural.

As we had the same name, and neither of us had ever met another Jim Hanley, we had a good time comparing notes in our letters back and forth, after I sent him an order for the then available issues of his fanzine. He expressed shock that there was another comics fan with his name.

I was stunned to hear of his passing all those years ago and agree that we can only guess at how many wonderful stories he might have given us.

It's worth mentioning that he was very active in Chicago theater. One of his theater friends expressed great regard for the first issue of Comic Book. Several years later, this friend wrote the musical, Grease. Jim was happy to think that his nostalgic comics might have been a partial inspiration for that.

I vividly remember him being thrilled when he met CC Beck, a particular inspiration of his. He was especially happy that Beck suggested that DC should hire Jim to do the Captain Marvel revival, that Beck was eventually hired for.

Jim's main cartooning work was as a caricaturist, hiring himself out for parties and the like. I still have the caricature he did of me at the 1971 or 1972 Comicon. One of these days, I should dig it out of whichever unopened box from some earlier house move it currently occupies.

Thanks for posting these pages of his wonderful story. It would be nice if his work could continue to be seen by future generations.

Great blog. We are having a comic con in a couple of weeks and we will be presenting the Hanley family with the first IF Fandom Hall of Fame.
Do you live in the area? We will have Jim Engle, Russ Maheras and Doug Rice and hopefully some others.
Here is a link to The Jam.
http://www.inter-fan.org/InterFan
Jam/InterfanJam2008.htm
and to Alan's Hall of Fame page:
http://www.inter-fan.org/history/hanley.htm
Ciao
DOC