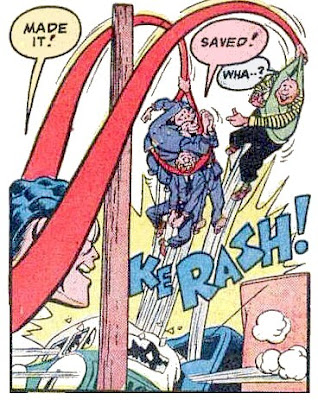 “Jack Cole and Plastic Man,” is an article about Jack Cole and his art technique on his star feature, Plastic Man. The article is written by Art Spiegelman, who also painted Plastic Man on the cover of the April 14, 1999 New Yorker magazine. Speigelman is the recipient of some distinguished prizes for his two volume Maus graphic novels, including a Pulitzer. The guy knows his comic art. 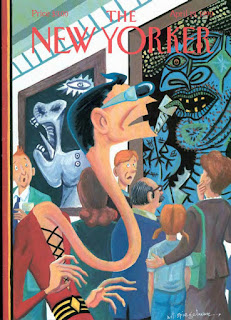 Speigelman mostly concentrates on Jack Cole’s ability to draw by stretching (literally) his imagination. The main focus is on Plastic Man, with a reference and examples also to his famous True Crime story, “Murder, Morphine and Me.” Some pages in The New Yorker are reproduced in color and sandwiched in with the usually gray-type and long-winded articles of the venerable magazine. While the magazine nowadays occasionally uses super heroes for their gag cartoons, only this issue had one on the cover. In 2001 the article was expanded and released as a book with the same title as the magazine article, Jack Cole and Plastic Man: Forms Stretched to Their Limits. The book is still available on Amazon.com.

I chose “The King of Zing” because it is full of funny stretchy stuff. It also has a stretch I had not seen before. On the next-to-last page Plastic Man stretches his forehead back so his eyes come out from behind his goggles. Cole could come up with such interesting sight gags. 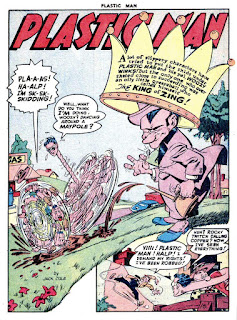 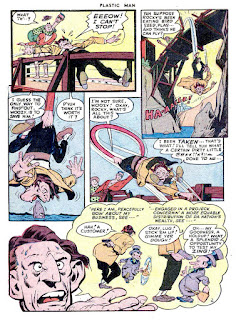 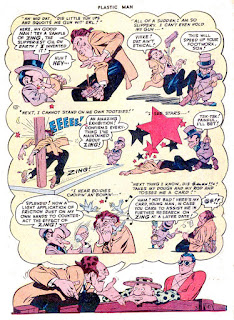 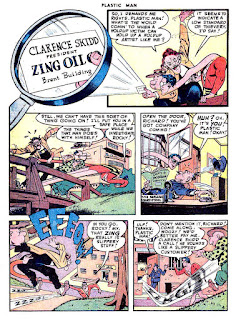 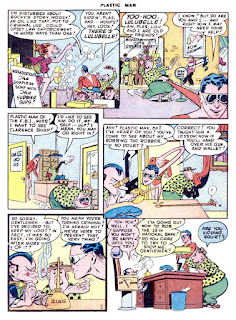 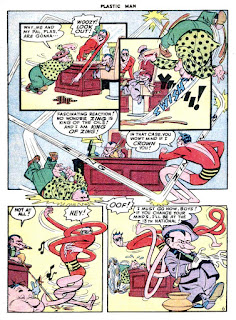 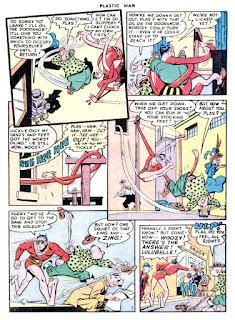 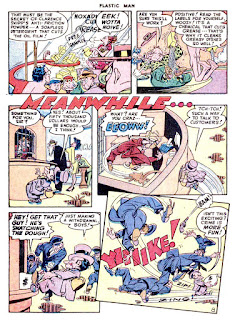 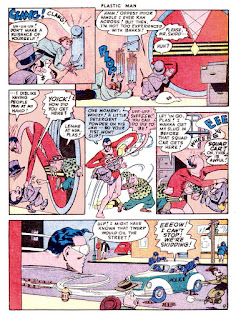 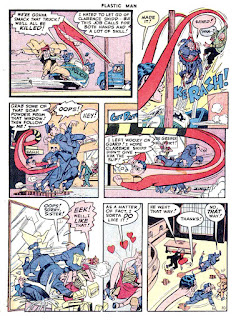 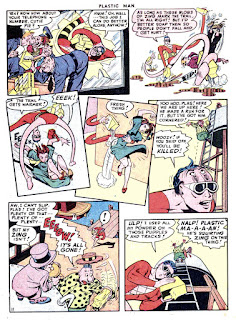 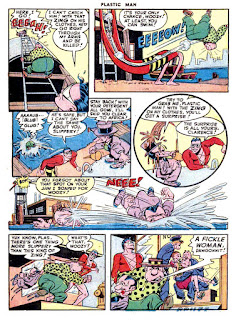 With all the crazy rubber antics, does Cole really get enough credit for his character work? Remove plastic man, and still you have The King of Zing who is a great, recognizable fun character, Lulu, and for good measure, second to last page a really "good" girl!

So much fun, cartoon-y art. It's really amazing. Even the first robber telling his story, the image on the bottom of the full page word balloon is just great.

And it's a fun, fast paced story.

please your advice. any blog for romance comics with full stories? thanks

My problem with Spiegelman's reading of Plastic Man is that it sexualizes entirely too much. There is, indeed, a fair amount of sexualized content in many of these stories (including the one that you reproduce here), but there's also a great deal of invention that simply speaks to the possibilities of plasticities of various sorts.

I appreciate the implicit digs in this story at the presumptions people make about the prerogatives of political authority. Over the course of his career, Cole's politics seem to have evolved from a rather thoughtless populism to a more clear-eyed view expressed through irony.

The quality of the inking seemed quite high to me.