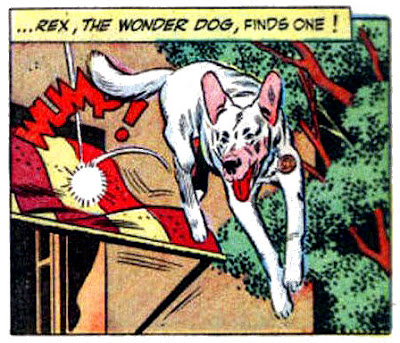 Rex the Wonder Dog is a super-smart dog we love to imagine. Dogs may astonish us sometimes, but they are not as smart as fiction makes out. Rex the Wonder Dog, for instance, can smell out evil. I understand that a dog’s smeller is one of nature’s marvels, but I’ll be dog-boned if evil is smellable. According to the Grand Comics Database (using editor Julius Schwartz’s records), the story was written by Robert Kanigher, and he endowed Rex with that ability. I haven't read beyond that story, which I read mostly because Alex Toth and Sy Barry did the artwork for this evil-sniffing anthropomorphic canine.

Oh, wait! I look again and see the story is titled “Trail of the Flower of Evil.” So there you go. The flower smells like evil. Puzzle solved! 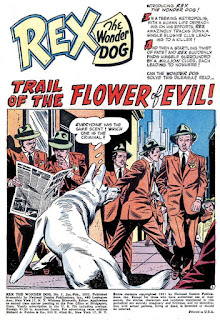 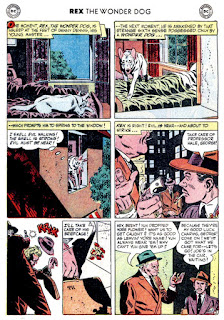 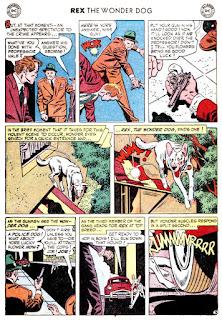 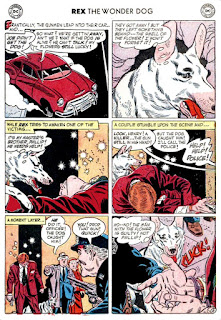 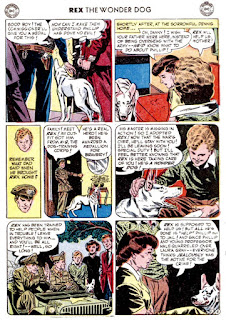 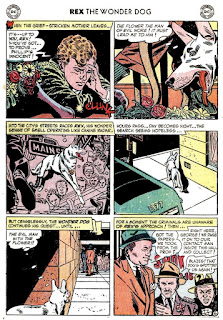 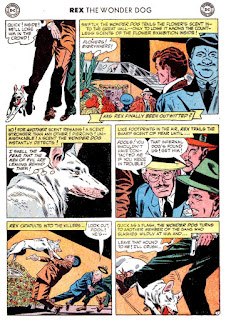 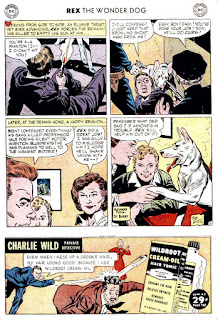 This story is like one by Basil Wolverton, reworked in an attempt to remove the comedy.

It always interesting to see artists tackle the "animal action hero" stories because of one major problem in paneling -- the animals are a lot shorter than the humans they chase, so the panels have to have a low camera that looks up or a high camera that looks down to show both the dog and human faces. Or you have to be good enough to show a lot of panels of lower bodies, which Toth does here.

Toth pulls this off fine. I wouldn't want that job, though!

Some great art was also to be found in the BACK pages of issues of Rex, where Carmine Infantino both penciled and inked the Detective Chimp series.

The artist was quoted in The Amazing World of Carmine Infantino (2000) as saying "Detective Chimp was a favorite of mine, because he was humorous and I enjoyed doing humor. Scripts were by John Broome and they were terrific."

I have an original art page for the story in issue 21 that I was going to attach to this comment as a jpg, but that doesn't seem to be doable.

Bill, the comments feature doesn't allow those types of attachments, which would be nice to see, but does allow those who plant links to who-knows-what kind of skullduggery and scamduggery. Fortunately, I am able to delete those before they are posted.

I am familiar with Detective Chimp, although I don't believe I have ever shown one of those stories done by Infantino; thanks for reminding me. I'll see what I have.

Brian, that's an interesting point. And the long and the short of it is the artist is always having to compensate, with showing the lower human body unless the dog is jumping at someone. I have always thought it was tougher to draw animals than humans because of the proportions and size difference. Maybe Rex should have been a Great Dane, like the one I saw recently with its owner, being walked. At least the Great Dane came up to the 6' man's belt line, not below his knees, as would be usual for smaller breeds.

I remember that Gil Kane did several issues of Rex, and it would be interesting to see how he handled the proportion problem.

Dan'l, Wolverton did have some animal characters, including Bing Bang Buster and his horse, Hedy.

I understand your comment that the Rex story had "the humor removed," but it is funny to me, just thinking of how people anthropomorphize critters.