Number 2486: Thinking of a stinker, the Thinker 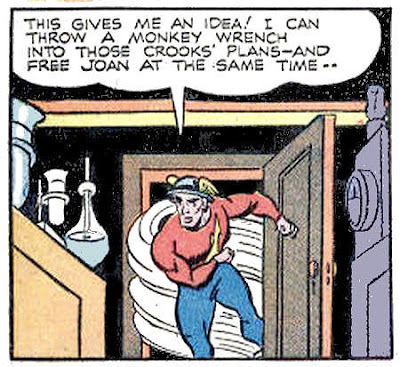 The Flash was one of my favorite superheroes in 1960-1961...I was especially rocked when The Flash #123 came out in ’61, and the cover featured both the Barry Allen Flash, and the alternate world Flash, Jay Garrick. 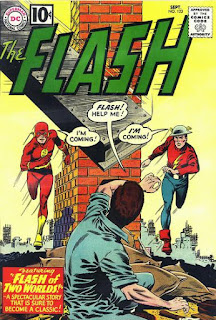 That issue introduced the concept of Earths One and Two to the DC Universe, and it was a genius move on the parts of DC editor Julius Schwartz, and writer Gardner Fox. Schwartz and Fox, as well as artist Carmine Infantino, had all worked for DC Comics (then called “National”) during the 1940s. In the days of my youth I read every fanzine I could get my hands on, and wanted to see the early versions of the DC/National characters I liked.
The Flash story below, from All-Flash #27 (1947) is drawn by Martin Naydel with story credited to Robert Kanigher. The villain, the Thinker, does his criminal acts while throwing a variety of gases around. He would have been unacceptable to me had I seen the story in 1961. No costume! What kind of superhero comic book villain goes out without a costume? Perhaps having just broken out of prison the Thinker hadn’t the time between his escape and gassing people to shop for a good costume. 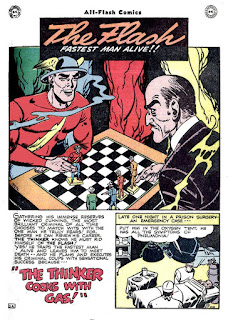 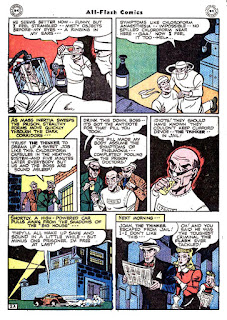 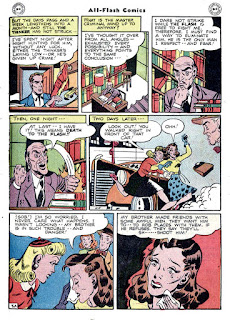 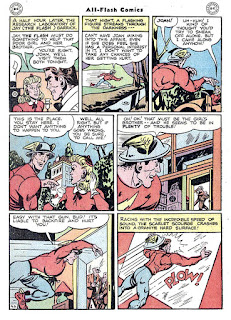 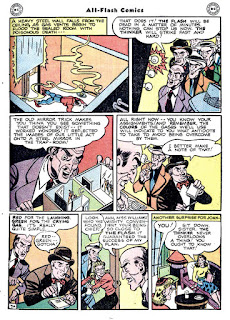 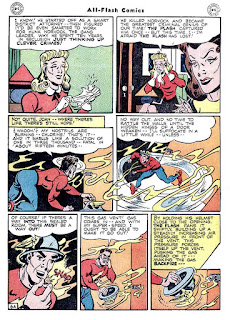 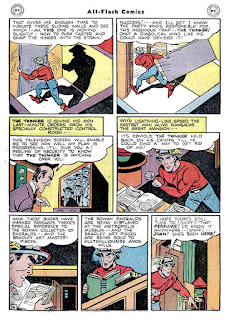 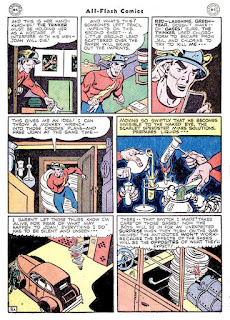 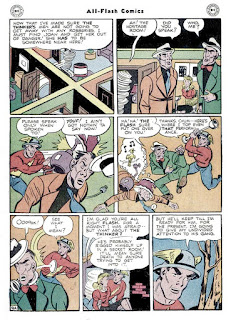 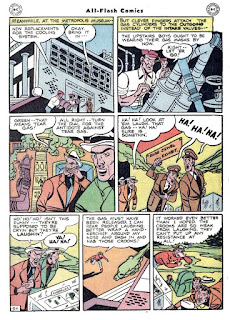 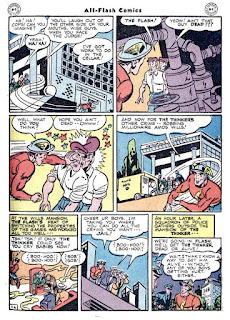 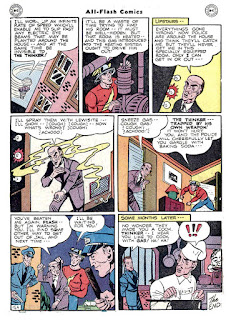 I was a bit too young for Flash #123. However, when I did start reading comic books, the Silver-Age Flash was one of my favorite characters, and perhaps my first favorite; and, from the first time that I saw him, I thought that the Golden-Age Flash was great. Part of his appeal to me, even though I was a little kid with young parents, and close to no one in middle age or older, was that he were an older man who was still a superhero, and doing well.

(Of course, with such a childhood, whenever I see an image of Hermes, I think of Jay Garrick.)

In this story, we have the classic device of the villain who departs when he feels sure that the protagonist will die. (Do none of these villains ever consume popular fiction?) We also have laughing gas that amuses everyone, and tear gas that causes everyone to grieve.

I love the comedy touches in this story, especially the kind of impossible riffing a villain makes right when the flash is hitting him with something at super speed (the guys head would explode, but, hey, comics!)

You know my only problem with the golden age Flash, and for that matter other speedsters of that era like Johnny Quick, is that I never got a sense of super speed from the artists. For Johnny Quick, he looked like he was just flying most of the time. Infantino really had it down for his Flash, just a great flowing depiction of super speed. That being said, I still love the old Flash, how can you not love that helmet? LOL!

RickH, Infantino, in his era, was really THE Flash artist. Infantino had a perfect style for the era of the late '50s and early '60s. Infantino put some demands on his inkers, though. I wonder how any of them liked having to do all of those speed lines.

Brian, hmmmm. I am hit with a grotesque image of Flash racing past a bad guy, and hitting him at supersonic speed, with the result an exploded head. I'm a few generations removed from the era in which I encountered the silver age Flash, but I recall there was never any real violence in those Comics Code approved stories.

Daniel, on a dental visit my dentist told me there had been a break-in the night before, and someone made off with his supply of laughing gas. My dentist wasn't laughing, and I've always wondered how many dentists used it for themselves. Or am I just thinking of Steve Martin in Little Shop of Horrors?

Tear gas does cause one to cry. In my two years in the Army I went through tear gas five times during training, and once when I was sent to an Army Reserve Camp when called up as a "filler." My tear gassing was in the '60s (and the last in 1970) when cops were using tear gas as a tactic for dispersing crowds. I used to say to people, "I've gone through more tear gas than war protesters." (I was also a protester when I got out of the Army, and never once encountered tear gas...or a busted head, for that matter.)