Number 2490: Ice cold plunderers from the past! 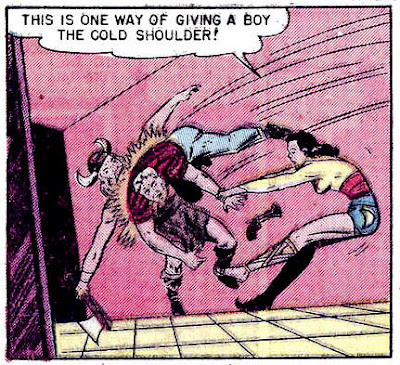 In this Moon Girl story, “Plunderers From the Past,” Some Vikings are thawed from ice and come back to life. A character in the story explains that “some frogs” can freeze and yet come back from their organs and body being in the deep freeze. Yeah, I’d heard that a time or two, so to corroborate that factoid it was to the Internet I went. The National Science Foundation has an article, “Frozen Frogs Don’t Croak,” and from that article: “Jon Costanzo, a professor at Miami University in Ohio says at the first sign of ice in late fall or early winter, the frog freezes solid as a rock.

“That touch of ice immediately sets off signals inside the frog that pulls water away from the center of its body, so the frog's internal organs are now wrapped in a puddle of water that then turns to solid ice. . .The frog's heart stops beating, its kidneys stop functioning and its respiration ceases--for months. The frogs endure this suspended animation by producing a type of antifreeze made with glucose, keeping the water in their cells in a liquid state at temperatures below 32 degrees Fahrenheit (0 degrees Celsius).” So when the Moon Girl character who talks about frogs asks, “Why not humans?” we know now that it is because we don’t have antifreeze in our blood.

Antifreeze or not, Moon Girl gets involved with these formerly frozen humans.

The story is written by Gardner Fox and drawn by Sheldon Moldoff. It is from EC Comics’ Moon Girl #6, 1949. 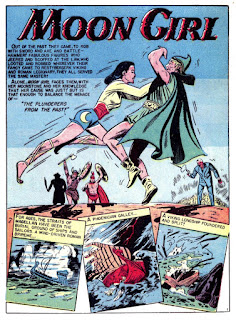 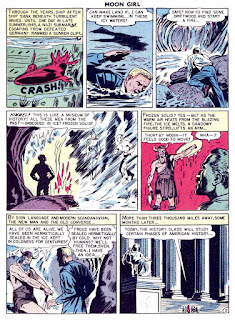 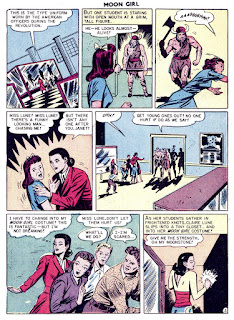 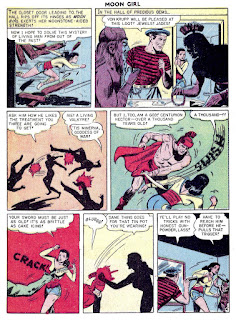 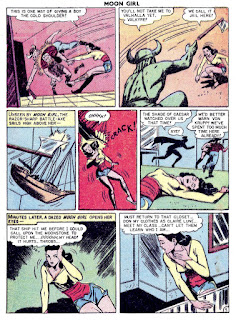 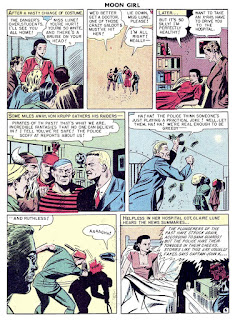 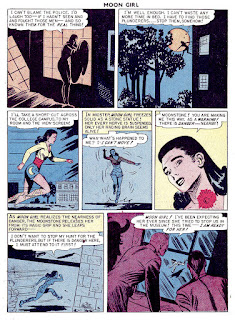 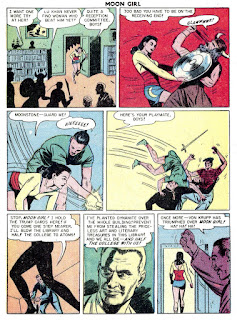 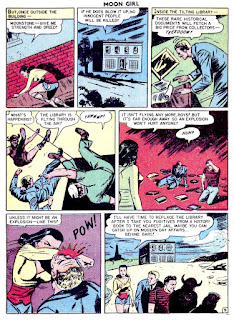 1940s heroes, always getting knocked out by chance, though we got a good "jeepers" girl image out of it.

Moon Girl was always a fun strip, but nothing special in the 40s. It's a valiant attempt to ape Wonder Woman but there's no good gimmick (like the lasso) and the costume is just a bit too plain.

Also for a bit of historical perspective, there's no evidence that Vikings wore horned helmets in battle.

Publisher Gaines took a lot of heat over Wonder Woman's kinkiness, and it looks to me that he was trying to have a non-kinky Wonder Woman in Moon Girl. No fan of Wonder Woman was buying it.