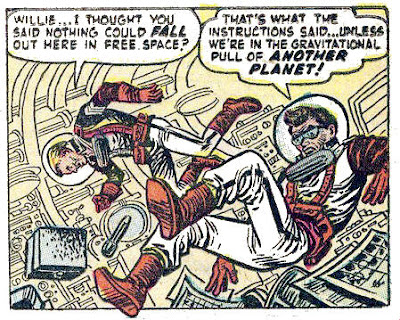 This type of science fiction I call a future in the past story. It was published in 1954, and takes place in 2006. The 21st century sounded wayyyy far away to those of us mid-century types. We (or maybe just me) thought  that after many years in the future we would certainly have bases on other planets, the moon, Mars, Venus...many achievements have been made, but habitation of any celestial body is still quite a few more years into the future.

The cute little 5-page tale of a couple of Army guys flying a ship to Jupiter is silly not just because we are looking back and we know none of it happened. Jupiter, at 33,000 mph, as the spaceship is flying, is a mighty long distance from Earth. According to the fount of all knowledge, the Internet, Jupiter is 483 million miles from Earth as claimed by one site, which makes a time table a bit more than a hop, skip and a jump. But actually the distance between planets depends on where the planets are in their orbits. Space.com says, “The New Horizons mission took a more direct path after its January 19, 2006, launch. On February 28, 2007, it performed a flyby of Jupiter on its way to Pluto and other dwarf planets. The travel time to Jupiter was just over 13 months.” And that’s no comic book trip. 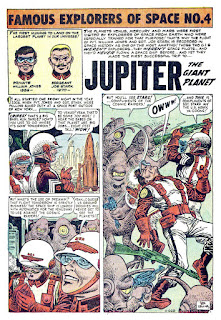 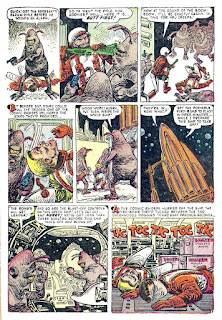 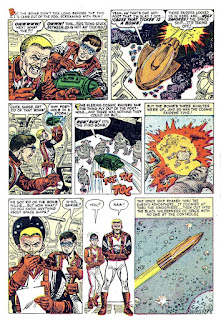 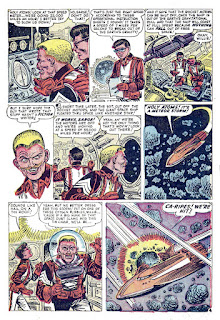 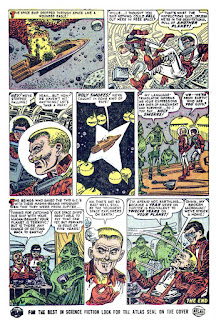 Every time I see a new comic drawn by Joe Maneely I am always blown away by his talent but saddened by his untimely passing. He would have been a great, up there with Kirby and Ditko at the dawn of the super hero boom.

This is a fun little tale that tries to have a scientific bent, though a whole lot of it is completely bonkers wrong!

I like this one a lot. Among all the silliness (like the ticking bomb which you throw out of the porthole- porthole?!? - of the spaceship) are a couple of real gems.

1. The adherence to Newton's First Law. Just today I was reading a comic written in 2020 in which a spacecraft "runs out of propellant" and so can't make its destination (a suicide run into a particular target it was headed for, in intergalactic space). That's not how physics works, and this comic was absolutely right about that.

2. The point about the length of the year on Jupiter. Far too much 'science fiction' assumes all years to be the same as the one on Earth.

Bill, science fiction of the '50s, and even '60s used a lot of shortcuts in telling a story. Those old TV shows I watched (Rocky Jones is one I remember)...every other planet had breathable oxygen, for instance. I saw a lot of that in Star Trek, when they'd beam down to a planet.

So...really, I can't throw a ticking bomb out of a rocket ship's porthole? Just that alone would keep me from becoming a passenger.

Brian, I've wondered that had he lived what Maneely could have done in those early Marvel Comics years. We'll never know, but it's fun to speculate. I'm sure he would have been a star, doing a character like Sub-Mariner.