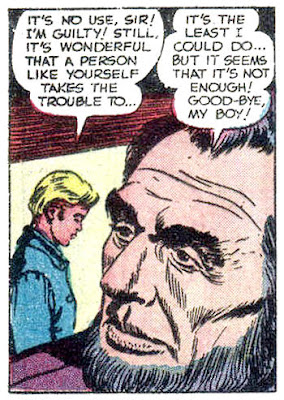 “Court Martial” is a romanticized version of a real-life pardon issued by President Abraham Lincoln during the American Civil War. A soldier is caught sleeping while on guard duty, and is sentenced to be shot. President Lincoln steps in and pardons him once he learns of extenuating circumstances. William Scott was the real-life soldier pardoned, and altogether Lincoln issued 343 pardons during his time in office. Scott was later killed in battle, shot by the enemy.

(A century later the punishment of death was long off the table for sleeping on sentry duty; while a soldier in the U.S. Army I fell asleep more than once while on guard. Luckily, I was never caught. I just hope after admitting it that the statute of limitation applies.)

The story is from Battle Action #17, an early Comics Code approved Atlas comic from 1955.

Art for the story is credited to Bob McCarty. 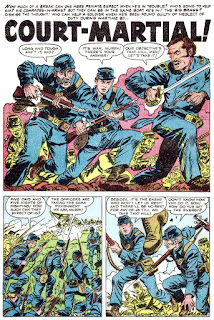 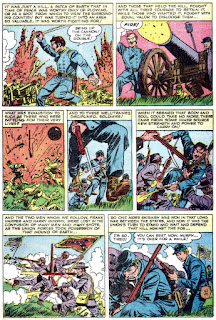 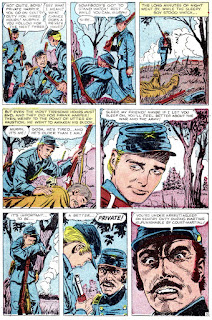 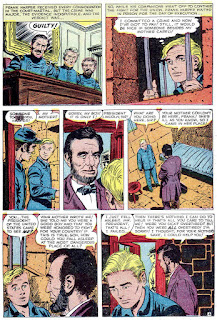 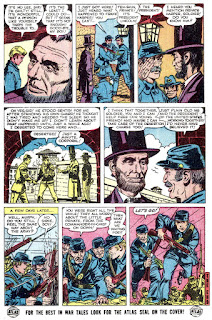 I once listened to a different version of that story.

One reason that punishments were so dire during the Civil War was exactly that so much was sometimes demanded of soldiers. Instead of bearing the political costs of raising a still larger army, the government could use terror to motivate fearful, exhausted men.

Daniel, I remember being tired all the time I was in the Army. I once fell asleep on my feet while standing during morning formation, and was saved from punishment by the guy next to me kicking me in the ankle, so I woke up. Even though I was a clerk, fatigue is part of a soldier's life no matter his job.

Reading about Lincoln and his pardons, he (and Andrew Johnson) pardoned ex-Confederate soldiers with a range of exceptions, including “Fourth – All who left seats in the Congress of the United States to aid the rebellion.” Just thought I'd toss that in.