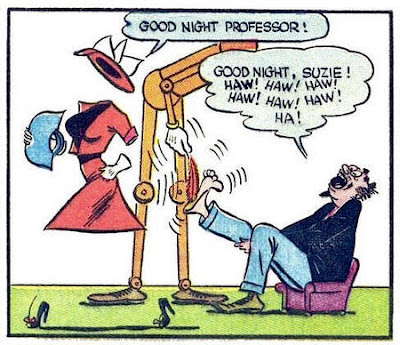 The cute and sexy Suzie is ditzy in that dumb blonde cliché used seemingly forever in comedy. Normally Suzie isn’t that dumb, but for various reasons in this story Suzie does not see that she can’t be seen.

“Out of This World” is the lead story of Suzie Comics #49 (actual issue #1, 1945, having taken over for Laugh Comics). It was published and on sale as World War II entered its final year. Suzie was the type of gal that soldiers and sailors thought of when thinking of home; “what we’re fighting for,” as the saying went.

It was drawn by Albert (“Al”) Fagaly, a comic book artist and creator. He created and drew Super Duck for the Suzie publisher, MLJ Comics, which would become the Archie line of comic books. There has always been a tantalizing bit of sex in Archie, and Fagaly could draw a pretty girl. Suzie ends up invisible in quite a bit of the story, but readers can fill in the blank areas with their imaginations. 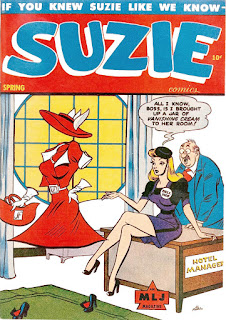 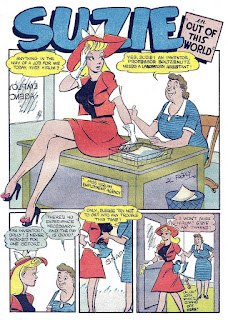 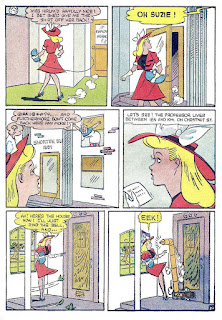 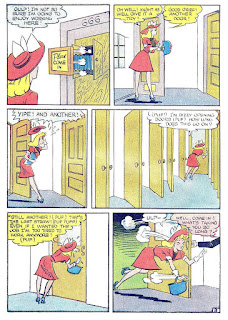 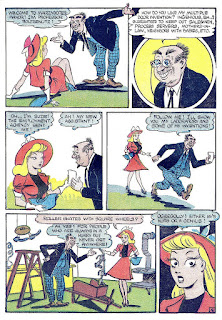 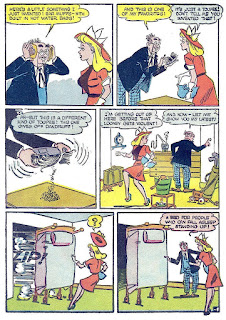 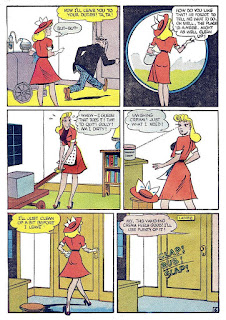 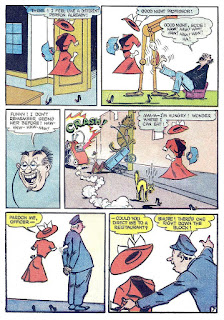 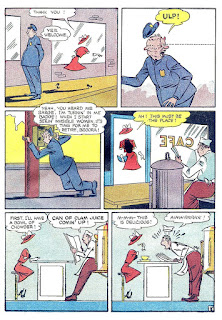 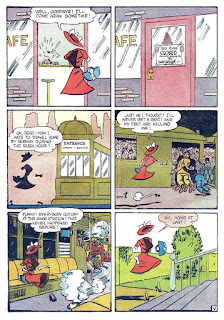 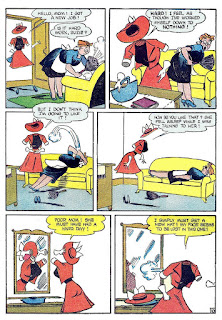 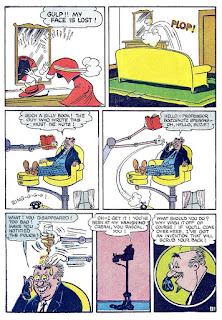 Normally, what a comic-book artist does when drawing a realistic or semi-realistic figure is to draw the beginnings of that figure as if naked, and then add clothing; then elements that would be concealed by the clothing are erased if they were initially drawn. I assume that Fagaly followed a similar process, except that he also erased what wouldn't be concealed by the clothing.

Having Suzie kick the professor to the curb was probably a mistake. More stories could have been told involving Suzie and this-or-that extraordinary invention.

Stories of invisible characters who do not conceal their presences usually depict those taken unaware as responding much as do the characters in this story. But I wonder what would actually be the typical reactions, especially in a era in which fiction has often given us characters who are invisible without being ghosts. We may learn. Revealed military technology offers something approaching personal invisibility.

Last night, I heard and saw a woman pleading as if with someone that he or she not leave; but there seemed not to be anyone else present.

OK, I laughed at Boltenutz (or however it was spelled!) as the name of the professor!

Looking closely at the art (sit down, peanut gallery) it seems that being able to draw half circles was pretty much the leading talent of good girl artists!

Daniel, I agree that the professor would have made a good regular character in the Suzieverse, because I think a good inventor and inventions create story plots. In this case my example is of Gyro Gearloose in the Duck comics by Carl Barks.

Al Fagaly was a friend of Basil Wolverton. The "666" could have been a joke to be noticed by his old pal Wolverton, who was religious.

When my mother was showing clear signs of dementia, a mental-health professional told me she probably was okay, albeit paranoid, and worrying would start if she had a kitchen knife, and chasing invisible people down the street. That image has never left me. When it wasn't centered on my mother with a kitchen knife or even running, I tried to imagine what unseen persons she would be chasing.

That might explain the woman you saw, pleading to an invisible person.

Brian, drawing "good girls" is more enjoyable than drawing dumpy men. I'm referencing Bill Ward, whose sexy women were immaculately rendered, unlike the men, who were all just stand-ins.