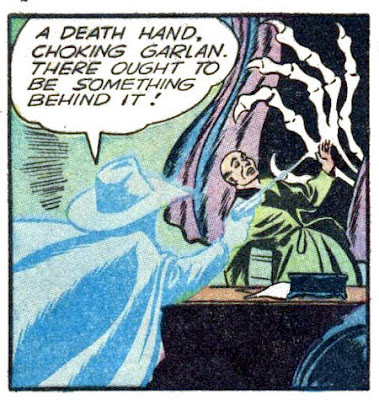 How many old comic book plots go something like this: rich person gets a letter saying if he doesn’t come up with $$$ by midnight he will be killed. I am sure the plot wasn’t new when this Shadow story was published, but had probably been carried on from dime novels and pulp magazines, radio and B-movie mysteries. In the case from this story the guy who gets the extortion note has not given the cops (or the Shadow) much time before the deadly deadline would render him dead.

You may recall from a former Shadow posting for this blog that Walter Gibson, who did the Shadow pulp novels since their beginning, also did scripts for Shadow Comics. He was paid more because of his history with the character. I cannot believe he put a whole lot of thinking into this story, though. The huge skeleton hand is great visually, just not logically. 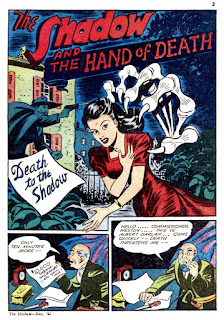 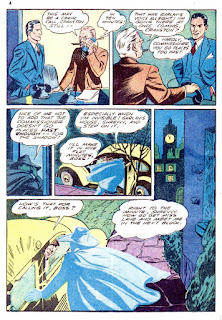 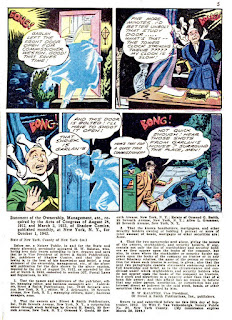 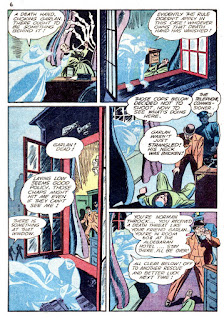 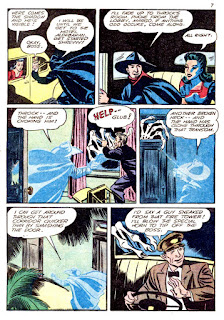 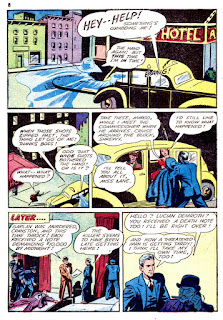 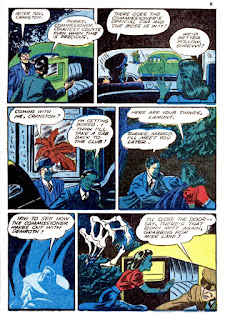 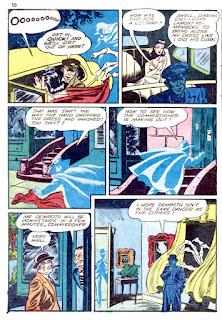 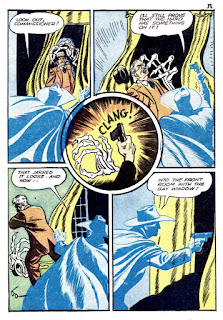 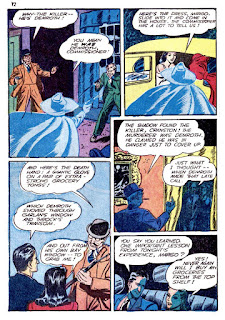 Yup, the story didn't have a lot of thought to it, and had a lot of impossibilities, but the concept of a giant hand -- yes, also not new -- was solid and I loved it just being omnipresent everywhere and grabbing everything.

I hope the Shadow gets his bullets in bulk he certain fired enough of them!

I just wish Bob Powell had done more of the art in the Shadow series. Jack Binder's renderings always suffered by comparison.

Street & Smith weren't just selling a comic book; this comic book would surely have had some effect on perceptions of the pulp. They ought to have been more concerned for the reputation of their brand than to release a story of this quality, even if a great many comic books were no better.

Gibson, of course, cranked-out an enormous amount of fiction, so one shouldn't expect ceaseless brilliance; but an editor could have stepped-in, and demanded that the device, even if implausible, not also be so pitiful, and that Binder or some other artist provide better illustrations. (Binder was quite capable of much better work, though I guess that Street and Smith chose not to pay for it.)

I've always found "color holds" -- like on the Shadow in this story -- rather odd. While I get the impetus to use the technique to denote invisibility (as here) or energy beings and such, in practice all it does is get me wondering why the word balloons and sound effects are printed in the same black lines as corporeal reality. I'm not quite alone in this, based on conversations had over the years, but for sure in the minority.

Daniel, the Shadow pulp went until 1949, and I'm certain it was kept going by the radio show. I assume Street and Smith were "bending" the character based on that version. Gibson would just be doing what he was told to do.

The color hold you mention came from drawing the character on an overlay, very primitive next to today's technology.

Brian, when I was on the firing range during my stint in the Army, after the shooting was over we were told to "police your brass," so that new bullets could be made from them. I wonder if the Shadow ever policed his brass? Probably not.

BEMaven, Bob Powell was working in those days, but around the time this comic book was published he was doing Mr Mystic for the weekly Spirit newspaper strip. The very first Shadow comic book I saw was one from the late '40s I traded for (circa 1961 or '62), and I got it because the seller told me the Powell art was some of his best.

When I met Jack Binder in 1970 and went to his workshop to see his paintings and some original comic art he'd saved, he explained that the stories he did were worked on by members of his comic art shop. He also quoted some of his costs per page, which I remember as being laughably low, for 1970, anyway. Powell also had some artists working on his pages, but his work was always out of the ordinary, so he picked some excellent assistants.