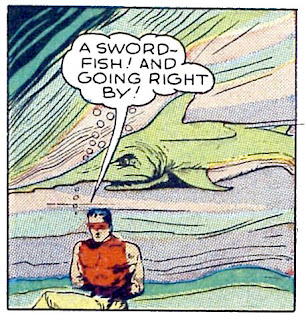 The Red Bee, a character created by Toni Blum and Charles Nicholas for Hit Comics, in a series that ran from issues number 1 through 24. The Red Bee had a power, that of controlling bees. I would like to have that power, at least to keep them away from me, since I am allergic to the sting of those little critters. I appreciate bees for their part in the overall ecosystem of Planet Earth. I just need to keep my distance while they are being busy bees.

The name sounds like it was influenced by the Green Hornet, or the Blue Beetle. And there is a tie-in. Charles Nicholas Wojtkowski,* who is credited with creating the Blue Beetle, also figured into the creation of the Red Bee with Iger Studio scripter, Toni Blum. I am showing it is because I love the cover, a beautiful illustration by Lou Fine of the Red Bee wrestling a swordfish. If you look at my teaser panel above you will see it actually shows a sequence from the story, something Quality Comics didn’t always do, preferring more symbolic and/or generic illustrations for their covers.

This is an early story, from Hit Comics #5 (1940), which is credited to Charles Nicholas Wojtkowski by the Grand Comics Database. 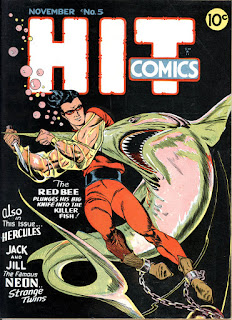 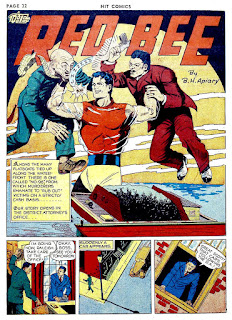 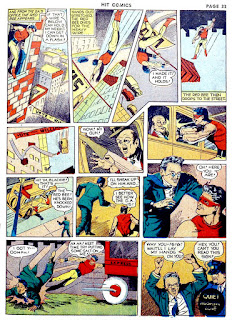 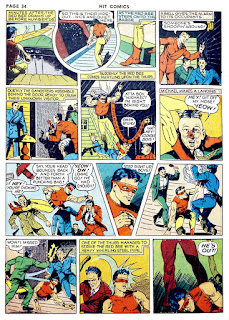 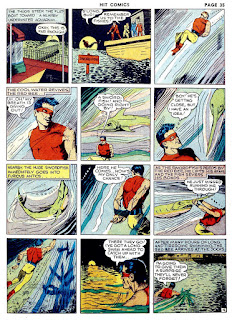 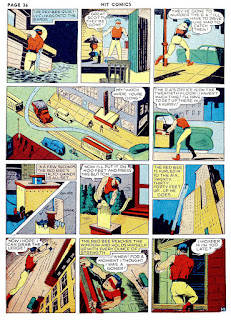 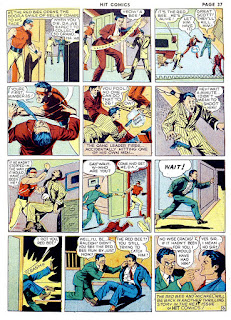 *According to the Wikipedia page, there were three artists who signed the name “Charles Nicholas” working for the Iger Studio. Jack Kirby, Charles Cuidera, and Charles Wojtkowski. The latter went on to Charlton Comics where he worked, still under the name Charles Nicholas, in tandem with inker Vince Alascia.
Posted by Pappy at 12:01 AM

There were some confusing elements to this story as it opened. I couldn't understand who's side the DA was on for one thing. The Bee is fighting the crooks, the DA is trying to grab the Bee...what is going on? Not having any prior knowledge of the Red Bee except in heavily retconned DC stories in the eighties I had no idea of his "relationship" with the DA. Of course that was all cleared up by story's end.

I was also confused as to how the Bee knew to go to No. 26 at the waterfront. Not much of a hideout if it's location was common knowledge. Was this story a continuation of previous events? Rare for comics of that era.

Lou Fine is among my favorite illustrators of that era but what was up with his apparent fondness for transparent shirts? Both The Red Bee and Firebrand, each illustrated by Fine, wore them. I think the Black Condor, yet another Lou Fine hero, may also have sported one for a time as well.

Apparently the author got the swordfish confused with the sawfish. The sawfish would have the necessary "serations" to cut the bonds.

Didn't know that the Bee could speak underwater. Though that little oopsie was soon rectified by using thought balloons in the next few panels in place of the speech balloons.

I am a bit surprised that you didn't mention the by-line. B.H Apiary. An apiary is another name for a bee hive of course and I guess the BH stands for bee hive as well. Nice little pseudonym there.

I was very struck by that cover image when I first saw it in The Steranko History of Comics. At the time, I imagined comparable interior art. Well, I am older and perhaps a little wiser now, so the truth did not surprise me.

(Is Steranko ever going to publish a finished version of the history as originally planned, or was the project forever abandoned?)

If the twentieth story is four-hundred feet up, then each story is about twenty feet tall; that would be rather unusual.