Page 4 of this early Spacehawk, by Basil Wolverton, reminds me of Wolverton’s later apocalyptic drawings for his church. In the 1950s the Worldwide Church of God, under the leadership of radio preacher Herbert W. Armstrong, commissioned Basil Wolverton, who was then an elder in Armstrong’s church, to do his unsettling series of scenes from the end of the world...or at least Armstrong and Wolverton’s vision of same. Even though it was over a decade after drawing Spacehawk that Wolverton did the drawings, it looks as if apocalyptic visions were in his mind while drawing the early episode. 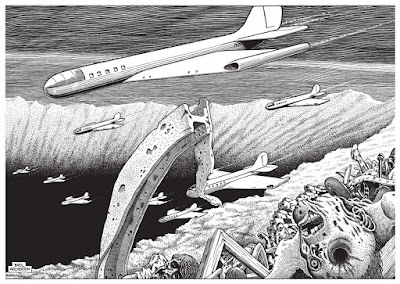 My father, Big Pappy, subscribed to Armstrong‘s The Plain Truth magazine, where these illustrations first appeared. Those drawings, and Basil Wolverton’s illustrations of biblical scenes, were probably the first work by Wolverton I ever saw.

Spacehawk is a demigod, flying in his spaceship, seeing and defeating evil. It appears that Wolverton may have been channeling some of his religious philosophy under the guise of science fiction. That is not unusual in itself, and Spacehawk may have some of those elements, but it is not preachy. 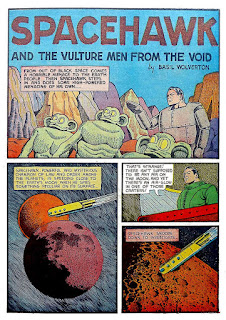 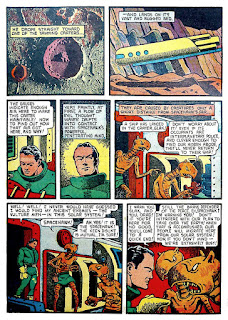 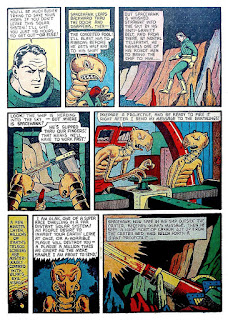 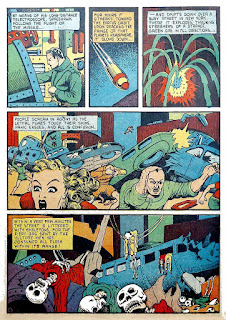 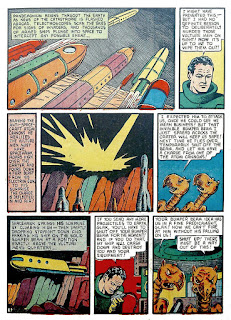 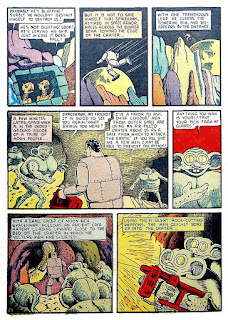 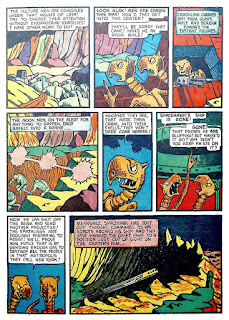 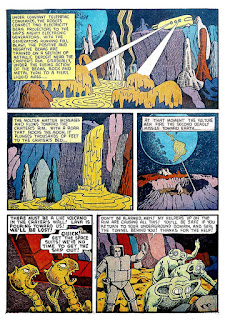 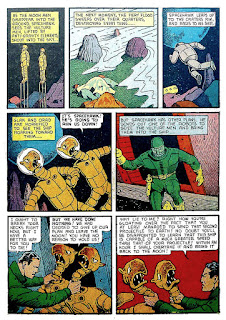 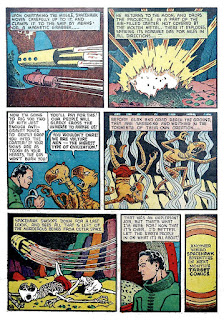 Wow. Space Hawk was one h_ck of a putz. The Vulture Men announced their intention of attacking the Earth, and he had a craft capable of over-taking their first missile; yet he allowed them to subject people to an agonizing death.

I am back to my fantasy of a meta-superhero, who travels through the comic book, thrashing those alleged heroes who don't do a proper job of things.

Certainly one could point to this story in support of the theory that Fletcher Hanks tried to model his work upon that of Wolverton. The hero is (as you said) something of a demigod; the villains are repugnant; they commit a terrible deed as the protagonist idles; then he causes them to die by their own evil creation; and their corpses fare badly. Of course, Wolverton's art is better, and the story contains less in the way of elements drawn at random.

There was a time when I used regularly to read The Plain Truth. I was by no means a believer; by that stage in my life I was either a deist or an atheist. But I was quite interested in alternative systems of belief. Sadly, I saw no illustrations by Wolverton, and only learned of his connection much later.

Supposedly Monte Wolverton currently owns the apocalyptic images and has even colored them. Monte has had a bit of a falling out with his father's church, so he likely doesn't agree with its former principles (which said church changed in the 1990s).

I can tell you the issues of the Plain Truth in question with Basil Wolverton's art are the six issues from October 1954 to May 1955.

He also wrote and drew "The Bible Story" serial which lasted from November 1958 to October 1968. In November 1968 it was retitled "The Story of Man"; in 1970 it moved to Tomorrow's World and lasted until its April 1972 issue, totaling in all 156 chapters. Said work only has only been reprinted in six volumes, leaving out much of his later work.

Ernol, thanks for that information. I have seen the colorized illustrations, but prefer the plain black line as originally drawn by Basil.

My parents kept me away from those apocalyptic issues of The Plain Truth. My memory now (thanks to my brotherfor helping me remember) is I saw the illustrations in a compilation put out by the church at a later date. I remember the Bible Story illustrations in The Plain Truth issues as they would arrive in the mail. I sought them out for that feature and Wolverton's illustration, without knowing who he was, or his history in comic books.

Daniel, my father was a traveling salesman for the Quaker Oats Company in the late forties until 1957. He was on the road every other week; his territory was Montana and Wyoming and Utah, with lots of wide-open spaces, miles between towns. When he was in his car late at night the megawatt radio stations were what he listened to, because of their clear signal. He liked listening to the old radio preachers like Herbert W. Armstrong, although I don't remember him being in any way religious.

He was even cynical about The Plain Truth, telling me once, "the magazine is free, but then they send all kinds of letters begging for money." I doubt he ever sent them any money, which may be the reason that after a point we stopped getting The Plain Truth in the mail.

I read it because I read everything I could get my hands on in those days. I didn't (and don't now) see Bible stories as religious, but more like folk tales. It causes chagrin among those acquaintances who beg me to see it their way and "save my soul," but I remain unmoved. I am just not a religious person, and have no inclinations to become one. As my paternal grandfather said when he was asked why his wife was so religious and he was not, "It's not in the blood." I'd say I got that grandfather's blood.