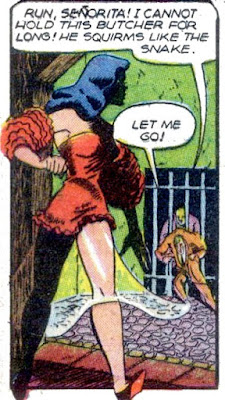 Señorita Rio is one of my favorites from Fiction House. She lasted from 1942 until 1950 in Fight Comics, illustrated by several of the top artists associated with that line, including Nick Cardy (who drew her first story) and Lily Renée Wilhelm, who is the artist most identified with the character.

Rio (real name, Rita Farrar) was a spy. As I read in this story, she was even known as a spy to the villain when he spotted her on a train. Pardon me for stating the obvious, but the usefulness of a spy is nil once identified by the other side. Maybe they let her go because they wanted to see her eye-popping whip dance (page 6).

In looking at Lily Renée’s Wikipedia page I read that she was born in 1921, which makes her about 98 right now. If Wikipedia is correct, then she would be one of the few remaining artists from the golden age of comic books. She and her parents escaped the Nazis and eventually ended up together as war refugees in New York. Lily began drawing comics because her mother saw an ad from Fiction House. In those days the male artists were being taken by the armed forces to fight the war. Lily was a fast learner, and according to Wikipedia, “at some point, she studied at the Art Students League of New York and the School of Visual Arts.” She dropped out of comics in the fifties, but continued working, writing some plays and children’s books. 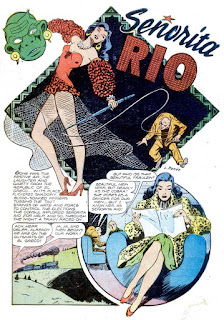 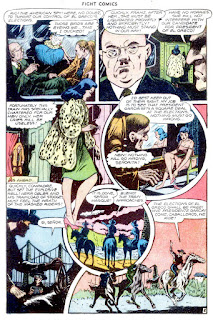 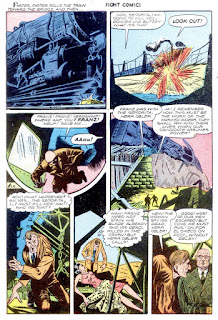 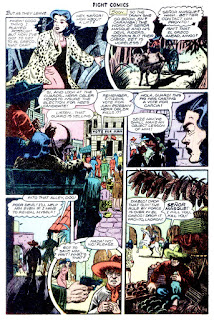 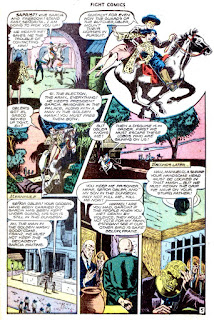 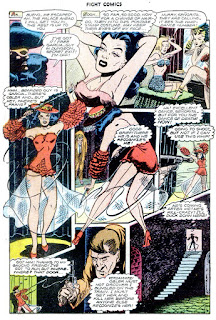 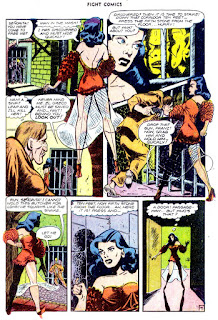 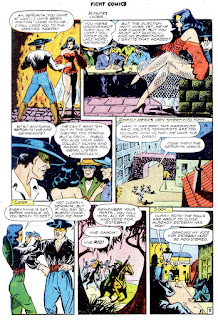 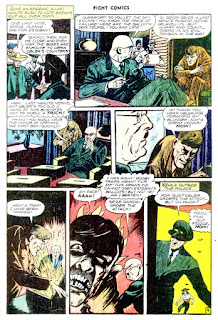 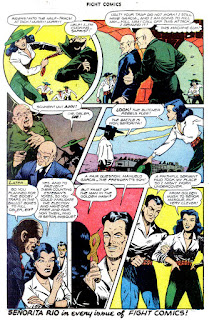 No kidding she was dangerous, she killed somebody -- with a machine gun -- while he was as close as possible to the person she had to save!

Lily might get noted for all her costumes and pin-up poses, but she draws a really good train, too, she was a pretty good all around artist.

Brian, considering her youth, yes, what we see is good, solid comic art of the forties, where almost every panel is filled with details. The publishers got their money out of the artists in those days.

My suspicion is that because of her tender age and beauty perhaps there were guys willing to help her out with the drawing.

On a completely different note, the editor of Fiction House comics was Jack Byrne, brother of Olive Byrne, creator William Moulton Marston's "other" wife. Olive was a writer of her own accord.

Wow, that Byrne family connection is news to me! There are no entries for Olive at http://www.philsp.com/homeville/FMI/q/q76.htm so I guess she never wrote for Fiction House? I only know of her writing for Family Circle.
Thanks!

Darci, based on the scant information I have (from The Secret History of Wonder Woman by Jill Lepore) I don't get the sense that Olive Byrne wrote for Fiction House. Olive's writing was sometimes propaganda for William Moulton Marston in Family Circle, as you said. A stronger sense is that Marston was a huckster with a strong streak of self promotion, and his women supported him in the days before Wonder Woman became a hit.