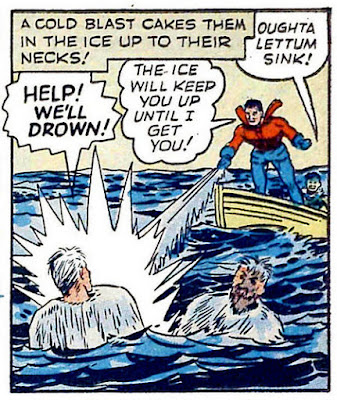 Sub-Zero, whose original name was Sub-Zero Man, was created by Larry Antonette for Novelty Press's Blue Bolt comics, and was one of those super heroes who could use ice as a super power. Think Iceman of the X-Men, which is the character I think of...created by Jack Kirby twenty years after Sub-Zero.

Sub-Zero was an alien sent to Earth. He went through a comet which froze him and his crew, and crash landed at the Salt Flats in Utah. In comic books the more unlikely an origin story the more likely it is that someone will use it.

Sub-Zero took up with a little Eskimo friend called Freezum, who is not as racist in his depiction as, say, Chop-Chop or Ebony, but is still racially insensitive. Freezum is embarrassing in this modern era. I show 'em as I find 'em, folks, but I am apologizing ahead of time in case someone finds the character, and his annoying way of speaking with "um" on the end of most words, too much to take. Since any idea in comic books, good or bad, is likely to be re-used at some point, I remember that Green Lantern had a pal, an Eskimo named Pieface, from the Silver Age revival of Green Lantern. I remember not liking that character in those days, but then I am not fond of most sidekicks, anyway.

Grand Comics Database says that artist John Daly did the penciling and inking on this story from Blue Bolt Volume 3 Number 3 (whole number 27), 1942. 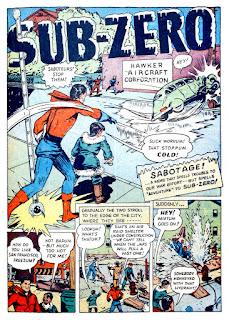 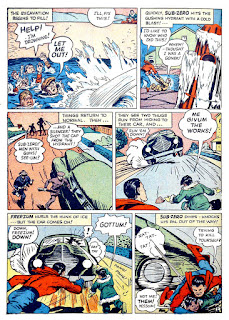 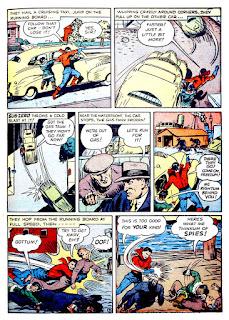 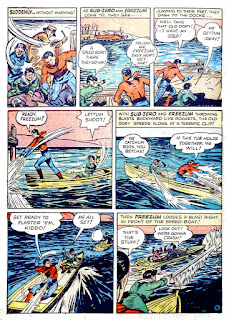 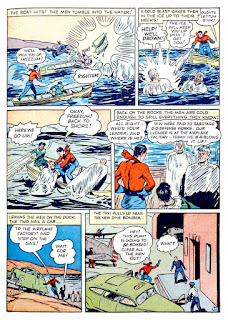 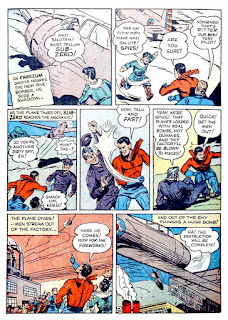 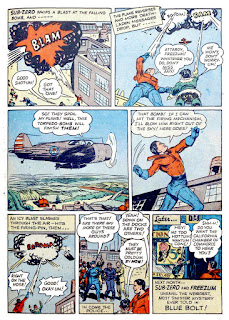 Urgh! I keep forgetting Pieface! I was always especially uncomfortable about that character! (But, then, I didn't see Chop-Chop until he'd been rebooted as Mr Hands, and wasn't exposed to Ebony White until still more years had passed.) I'd find Freezum a bit less off-putting if the suffix “-um” had some apparent grammar to it, as if the character were applying something from another language; but the script seems just to attach it randomly.

I notice that the blasts from Sub-Zero and from Freezum have propulsive effect when it suits the writer's purpose, but none when it would interfere with the story. It would be more interesting if the heroes had consistently to balance things, perhaps blasting in one direction for no purpose other than to offset a blast in the other.

Since none of the history that I've read has indicated that America had a notable incidence of sabotage during World War II, the presence of so many saboteurs and fifth columnists in the comic books has long seemed dissonant. But perhaps an analogy is to be found in the domestic theatre that has characterized so much of the present “War on Terror”.

Daniel, I assume that all of the stories about Nazi saboteurs had their genesis in some scare talk of the time, or at least warnings about the potential. Americans of German descent make up a big part of the American population (nowadays about 17% some statistics show) and it was probably big during the first half of the 20th century, also. Actions and demonstrations by pro-Nazi German bund members before the war may have alarmed many in the government, extrapolating bund members as potential saboteurs.

I remember you have written before of Operation Pastorius, where German agents were landed on beaches, then quickly captured. Except for two of them turning against their comrades and getting prison sentences, the others were tried as spies and put to death. By then the Germans were grasping at straws. One of the biggest problems of America as a target for sabotage is the sheer size of the country, and the wide dispersal of war manufacturing. The Germans landed 8 saboteurs, hardly enough to make a dent. The Germans were never that big of threat to the continental U.S., except for U-boats off the east coast at the beginning of the war, and even that siege didn't last for long.

I'd worry a lot more about today's world, where we have learned how easy it is for a foreign power to corrupt from within by using social media.