Number 2013: Spirit of the drawing board 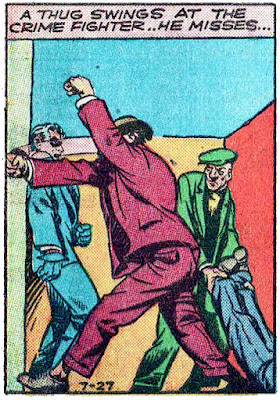 Very often the Spirit made his entrance late in his own weekly comic feature. In this Spirit Section, dated Sunday, July 27, 1941, he doesn’t show up until page 4. The story is about some children and a kidnapping by a mobster...and a newspaper cartoonist who does a crime comic strip.

Unlike Pink Perkins, the writer/artist of “Gumshoe Gus,” Eisner had to have a team to produce his Sunday-only Spirit story. This story feeds into the fantasy that successful comic strips were produced by a single individual. But any crew Pink might have had to assist him would have been superfluous to the plot, and after all, Will Eisner was the only one who signed his name to the Spirit. 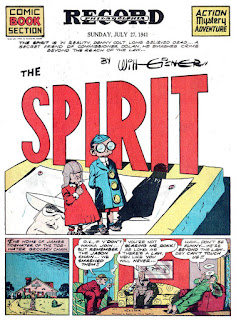 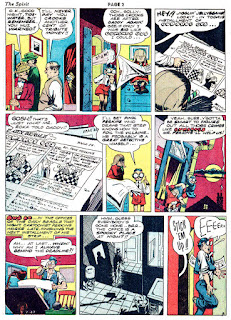 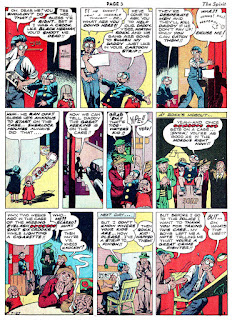 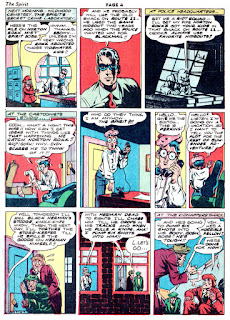 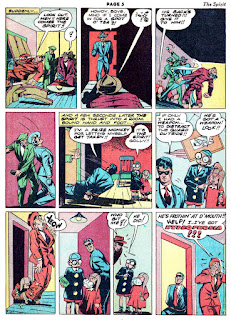 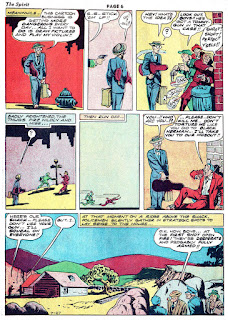 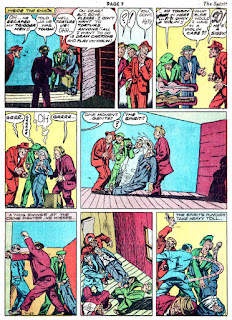 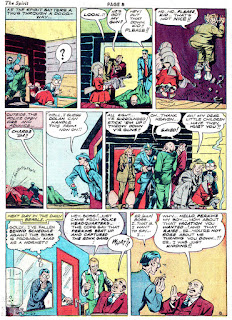 I've mentioned this before (recently), but I'll repeat that I hate how strip creators used to take all the credit for their assistants' and ghosts' work, all to give the reader the impression of "consistency." Heck, there are some, like Jim Davis, who still do this today. We know that Eisner was off The Spirit while he was in the military, yet he continued to sign it. That practice seems beneath the icon that Eisner became, but maybe he was different back in the 40s, or perhaps it was a syndicate requirement. Anyway, the script here reads like him, with the hero playing backup to a milquetoast guest star, but did he draw it? The art and panel designs aren't particularly flashy or innovative; even the title panel is ho-hum. But it was a cute story anyway. I loved the part where Perkins aimed his violin case at the gangsters; I knew what they were thinking even if they'd not said it. Eisner was one of those rare Golden-Age cartoonists who could get his point across without the need of dialogue or captions.

A entertaining mistaken identity story, with a pretty static layout that didn't really scream Eisner to me, but a lot of times the media the story is written for is the restriction.

There's a lot more comedy than actual danger or daring-do in this one; the thugs never seem to be a creditable threat. That said, great gags, I especially liked the soap/bite gag.

Ryan and Brian, both of you picked up that the story probably wasn't drawn or even laid out by Eisner. I really don't know.

I found that when Eisner went to war the strip's artwork changed, using more traditional comic book art and layouts. I think of the strip as being Eisner's, and at its best when he had something to do with it. If I don't see his hand in it I am usually disappointed.