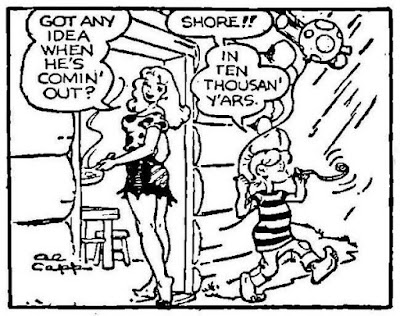 The August 1957 issue of digest-sized Satellite Science Fiction reprinted a Li’l Abner Sunday Comics five-week sequence that began October 23, 1955. Li’l Abner is trapped in a time capsule which no one can enter for 10,000 years. Reading Satellite editor Leo Margulies’ comments on Capp, you get the idea that Capp was a big science fiction fan, and maybe he was just what Margulies claimed. But Capp was primarily a satirist, and nothing was too wild when it came to pointing out fads and foibles in American culture during the Li’l Abner run from the thirties to the seventies. This story of a time capsule is less science fiction than a fantasy based on sexual jealousy. No matter...if it helped circulation for Satellite then it was all right to stretch the definition of science fiction. As for Al Capp, any publicity was good publicity.

This story is also reprinted in the book, Al Capp Li’l Abner The Frazetta Years Vol. 1 1954-1955 (2003), by editor Denis Kitchen and publisher Dark Horse, with color scans of Sunday comics pages from the original newspaper run. Frank Frazetta was an assistant to Capp. His later fame seemed to upset Capp, to the point of once denying Frazetta had ever worked for him. But he did, from the mid-fifties to the early sixties. Frazetta did pencils only for the Sunday strip, because his inks tended to overwhelm. Can’t show up the boss, you know. According to the Kitchen/Dark Horse book, for one day of work per week Frazetta earned $500 a week. In those days, when many in the labor force worked for $500 a month or less, Frazetta had a pretty good gig. But fortunately for us, he left the strip after being refused a raise by Capp. Frank went on to the work that made him world famous under his own name, with his style not buried under the inking of other artists. 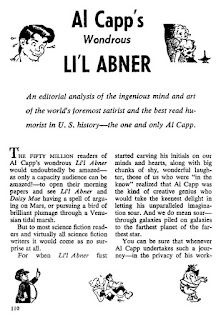 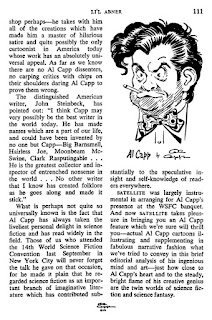 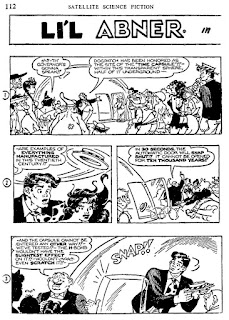 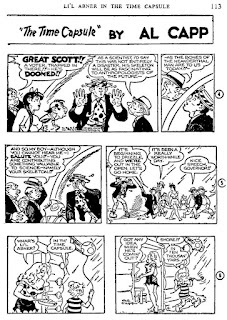 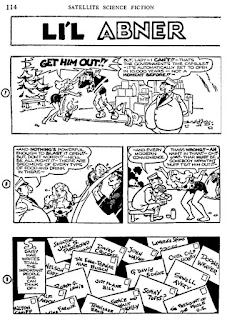 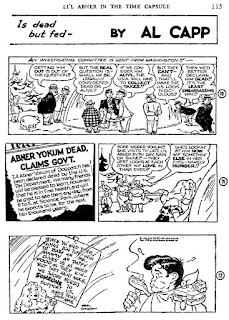 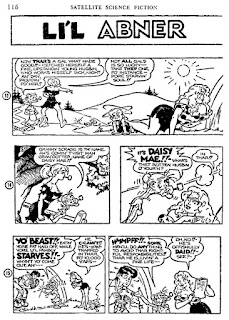 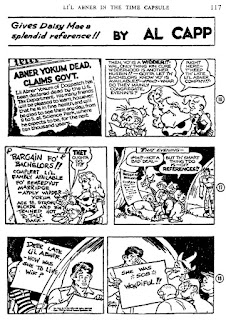 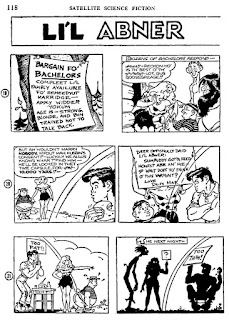 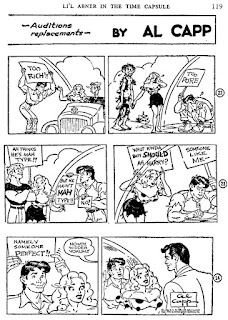 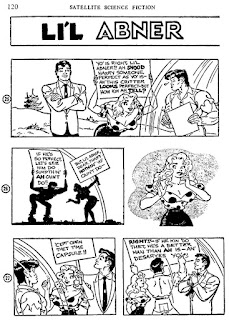 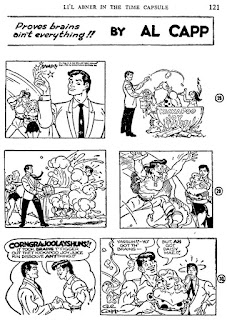 Of course, there's a reference to pal Walt Kelly in there.

I understand Capp's position in the world of comics and how important he was, but I always had a hard time with his comics. They never clicked for me. Kelly's stuff, obviously influenced by Capp's stuff, I love. This? It's OK. The political stuff is still funny and kind of timeless, but ... the general joke flow falls flat for me. He's obviously an important influential creator. I don't really understand it!

Brian, all I can say about Capp is he had his greatest influence on popular culture so long ago that it is mostly forgotten now. I remember my father loved Capp and often quoted him. That generation is almost all gone.

Capp was quite an unpleasant person with a prickly personality and personal vendettas.
He was ahead of other cartoonists in establishing his right to profit from his strip by controlling the merchandising and licensing. So he had a sharp business eye, even though businessmen were often the ones he roasted on his satirical spit, right next to politicians, who got no mercy from his barbs.

Was Capp really the "best read humorist in U.S. history"? And were there actually "no Al Capp dissenters" at the time of this article?

I've never been able to understand the arrogance of comic-strip creators who took the credit for the work of their assistants and ghosts. Would people have really stopped reading if it were known that the originator of the series was not drawing or even writing it anymore? Honestly, I'd have stopped reading if I knew that someone were taking all the profits and long vacations while someone else labored, as I did with "Garfield."

If Daisy Mae was 18 at the time of this continuity, she was underage when she got married and had a baby. I know no strip could get away with that today. But then, they also couldn't get away with the casual racism, sexism, etc, of earlier generations.

"Joy juice," eh? That term has certain connotations that wouldn't have been agreeable to Li'l Abner's readers.

Lil Abner was actually in the August issue of SATELLITE. There was no July.
See http://www.isfdb.org/cgi-bin/pl.cgi?195745
Art Lortie

Art, thanks. I have made the change in the text.

In my opinion I'd say Mark Twain was probably number one.

Not that long ago a girl of 14, with parental consent, could get married. My nephew, who was 21 at the time, married a girl of 15. It is comparatively recent that the age of consent was raised to 18. Daisy Mae was probably underage when she was married and pregnant, but those were comic strip years. I believe in real time she chased Li'l Abner for twenty years.