Number 2009: From north of the border: Thunderfist! 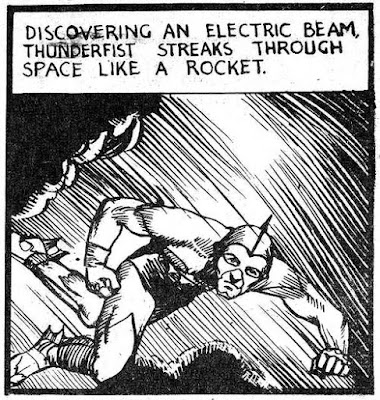 Thunderfist was a character created for Canadian comic books after American comics were banned from Canada as “non-essential imports” in the early days of World War II. Thunderfist was drawn by Murray Karn in an Alex Raymond-Hal Foster style. There are some crudities in the art, a problem shared by many American comics. Karn was young; he joined Bell Features of Canada when he was 18. After the war and the end of the Canada comics industry he emigrated to New York and had a career in advertising.

For economic reasons these early comics were printed with four-color covers and black line interiors, and are known as Canadian whites.

Thunderfist is described in an article on Karn in the website Southampton Artists by Hope Nicholson and Rachel Richey: “. . . The artwork by Murray Karn made [Thunderfist] the slickest of all the Canadian costumed heroes. Thunderfist was actually Randy Steele, who worked tirelessly on strange electrical inventions. He created, for instance, ‘a bullet-proof uniform charged with hundreds of electric volts powerful enough to kill a dozen men at once’. Thunderfist featured an uncanny mythology of technology and weaponry, which he used as the keys to world salvation.” 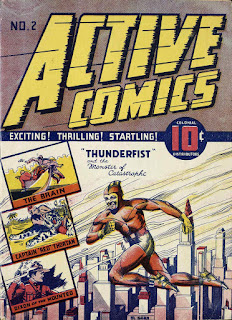 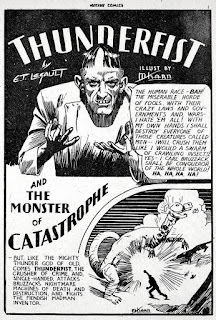 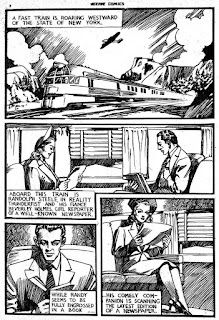 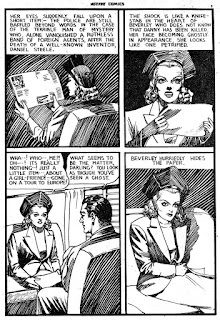 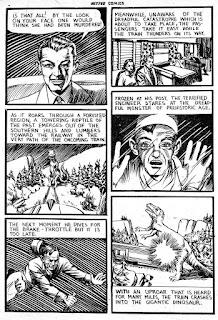 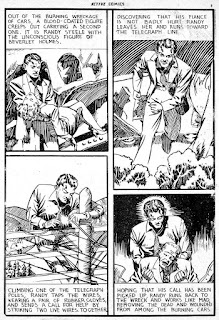 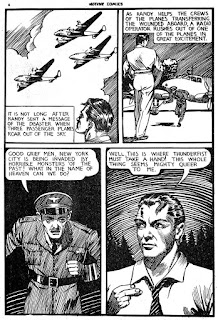 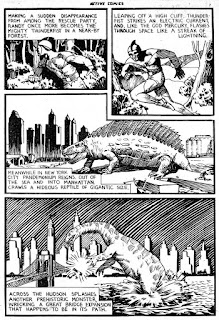 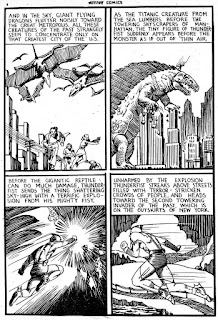 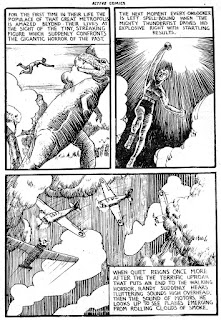 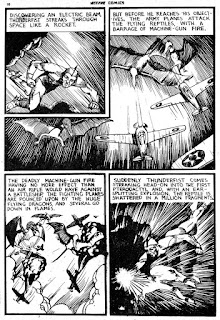 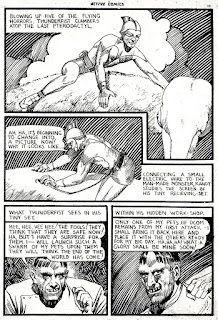 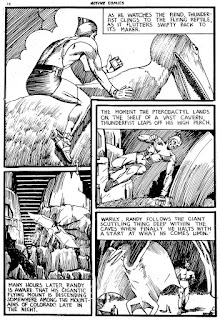 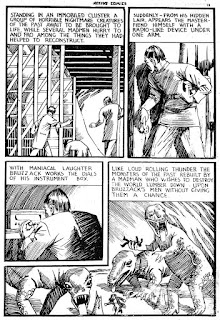 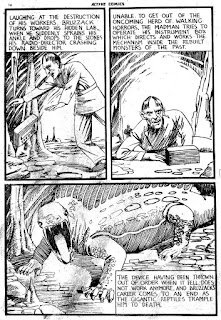 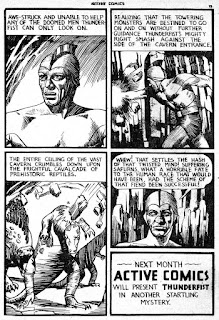 Well, that story got all dressed-up, but apparently had nowhere to go. I did like the business of crude telegraphy, but it seems to me that, as Thunderfist, Randolph could have accomplished more in his rescue efforts at the site of the train crash.

The art had its limitations, but on the whole it was attractive. A decent coloring job would have made it look much better than a great deal of what came earlier and later in American comic books.

Daniel, something that interests me is that much of the history of the World War II era Canadian comics is still unknown to American comics fans.

There is a book of reprints of Canada's Nelvana of the Northern Lights, which can be purchased from Amazon.

I never thought about the fact that Canadian comics aren't mentioned again after World War II, which of course they wouldn't be if they ceased to exist. That would be an interesting story--the rise and fall of the short-lived Canadian Comics Industry. Has that tale ever been put in print?

Karns' style was a bit scratchy, but I like it. His close-ups look kind of like he was using photo models, but maybe he was just more talented than I'm giving him credit for. I adore the rough, still-developing look of golden-age comics, but the layout of this story is uber-boring. Nothing but different sized rectangles with all the content secure inside--no interesting panel shapes or elements breaking through the borders. And the captions make Raymond and Foster look restrained.

Gah! I can't stand it when golden-age comics makers couldn't get their dialogue in the right order in the panel. At the bottom of page 3, Beverley answers a question, and then Randy asks it! It's as if no one on the creative side knew yet which way a person should read a comic story.

Without flying off the handle about how badly the defeat of the villain was done, I will instead offer two options for a superior ending: (1) Thunderfist arrives at Bruzzack's lair, defeats the dinosaurs, and then takes Bruzzack into custody, to land him in the booby hatch. (2) The whole story centers on Bruzzack and his attempt to destroy humanity, and his end comes accidentally at his own hands (as in this story, but without Thunderfist's presence).

NOTE: Believe it or not, my comments were originally three times as long, but I figured you could do without all my asides and grammar corrections. Say thank you.

This may sound silly, but I swear some people have ESP, like Mrs Pappy, who can answer a question before I ask it. It makes me sound silly when I say, "Gee, honey, I was just about to ask you that!" So perhaps that was the situation with the answer-before-the-question panel. Or, as you say, the writer or letterer (and I assume the letterer was also the artist) screwed up. (Most likely.)