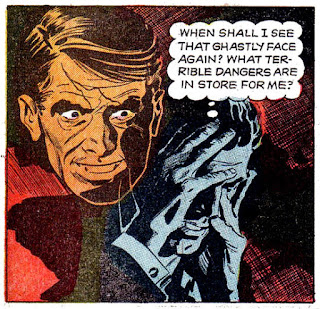 Ten years after the end of EC Comics, three of the artists closely associated with EC had stories published in Gold Key’s Ripley’s Believe It Or Not True Ghost Stories #1 (1965). George Evans is credited with “The Mummy’s Hand,” Wallace Wood with “The Ghost Ship,” and Al Williamson with “The Flaming Scar.”

That word “true” shows up in the title, but proving any of these stories to be true would be impossible, except for the verifiable Iroquois Theater fire in Chicago, 1903, and the sinking of the Titanic. You think a mummy’s hand caused a curse? You think the son of a sea captain found his father’s ghost ship, 10 years lost, floating full-masted with canvas in perfect condition? You think a man avoided death by avoiding a man with a flaming scar?

I don’t believe in ghosts, or at least I don’t now...when at some point I have passed over into the great unknown I’ll attempt to come back and haunt you readers. Believe it or not! 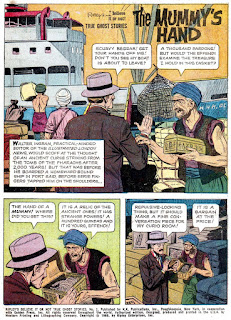 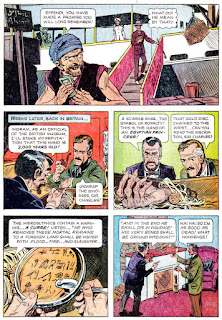 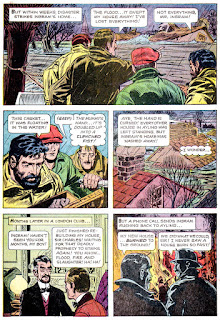 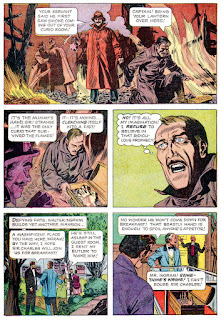 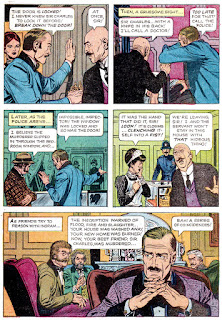 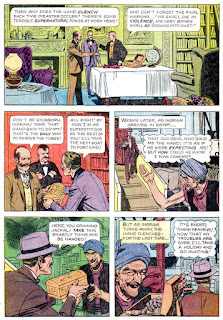 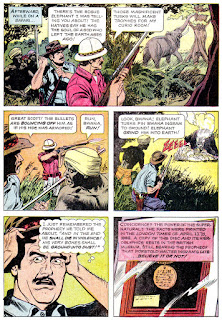 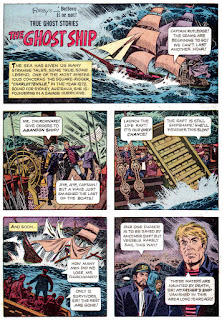 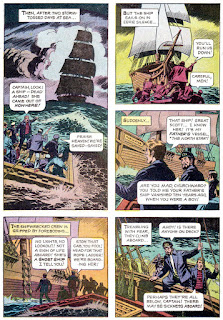 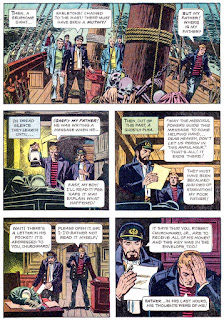 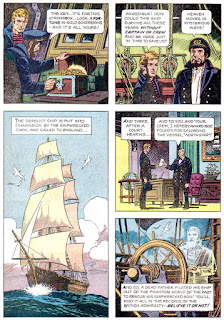 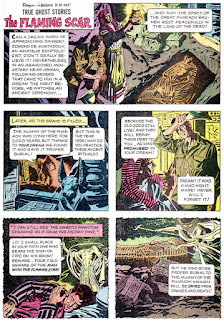 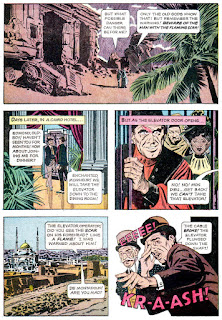 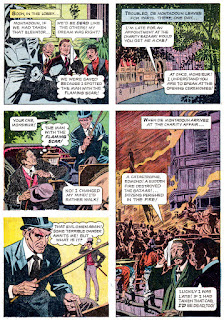 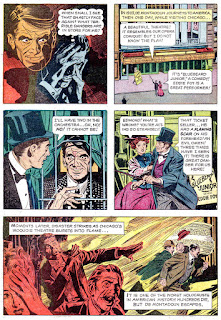 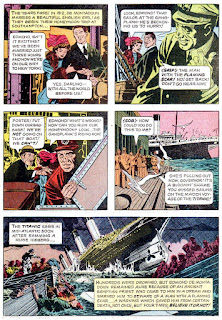 Believe it or not, this coming Sunday I have a Pappy’s Sunday Supplement...the complete issue of The Face #2.
Posted by Pappy at 12:01 AM

As a child, I didn't know what to make of Ripley's Believe It or Not! True Demons and Monsters, because of that word “True”. I didn't encounter True Ghost Stories until it was pretty clear that they lying about the demons and monsters, though a shyster might have argued that the ghost stories truly were ghost stories, albeït that they were not factual stories.

100 guineas would have been £105. Now, as I've said previously, price-level calculations become ever less meaningful as intervals are lengthened; but, still, we're talking about something roughly like US$10,000, handed-over at the last minute to a stranger, for a mummified hand in a box, in an era in which whole mummies were easily acquired for well less than £5.

Daniel, regarding mummies, I read once that there were so many being exhumed in the 19th century that Egyptians were burning them, using them for fuel. Probably nothing like a good steak cooked over a flaming 3,000 year old corpse to give it a little extra zing in the flavor.

A few years ago you mentioned in a comment that price-level calculations were less meaningful the further back one goes, and it stuck with me. After what you said I look at the Internet and see those instant calculations from then to now more as a guide than actual prices. But they are still something with which to compare. The story was fiction, and the prices probably seemed reasonable to the writer.

That mummy's hand would be great if you were into insurance fraud!

Note that some of the EC artist did some great horror work for the Warren mags (sometimes under a different name, like Johnny Craig being Jay Tecee ... get it.) Craig is so recognizable it seemed odd to see the pseudonym.

The saddest thing of all is still the utter disappearance of Ghastly. He would have had so much fine work ahead of him. He did leave us with some beautiful Old Witch painting in his final days, though.

I didn't believe "The Mummy's Hand," so I did a little googling, and guess what I found?

While in Egypt as a volunteer for a relief expedition to help British forces, 33-year-old Lieutenant Walter Herbert Ingram, youngest son of the Herbert Ingram who founded the London Illustrated News, bought a souvenir of his adventures--a mummy that he got from the English Consul at Luxor for £50--and had it shipped home from Cairo. He gave the mummy to Lady Valerie Meux in 1886, and she had the British Museum's resident Egyptologist, Dr. E.A. Wallis Budge, do a full inspection of it.

On April 6, 1888, Ingram and Sir Henry Meux were elephant-shooting near Berbera, on the east coast of Africa, when the natives led them to a particular herd. Because he'd loaned Sir Harry his elephant gun, Ingram had only a comparatively impotent smallbore rifle when he tried to down one of the elephant cows and ended up swept from his saddle by the drooping bough of a tree. Ingram was trampled to death by the elephant he'd wounded. For days the elephant would let no one approach the spot, but eventually Mr. Ingram's body was retrieved and temporarily buried in a ravine. Floods caused by heavy rains later washed away Ingram's remains. One sock and part of a human bone were found and interred at Aden with military honors.

The Illustrated London Times of April 11, 1888, reported "the sad news" as it had been relayed to them by telegraph. It gave details about Ingram's military career and expeditions and mentioned that he'd been married for a year.

Dr. Budge published a translation of all of the hieroglyphics on the case and mummy itself in 1893. Budge's translation gave the mummy's name as Nes-Amsu, second prophet of the god Amsu, and showed that the mummy's case had many classic exortations to the gods of Egypt to recognize Nes-Amsu as a good man and to help him find a good place in the afterlife.

A twelve-page, illustrated interview with Lord Charles Beresford in an 1896 issue of The Strand magazine of London, included a page and a half about "the final fate of Walter Ingram." According to the article, the mummy Ingram purchased was that of a priest of Thetis. A representative from the British Museum deciphered and translated the inscriptions on the mummy's case, which set forth that whosoever disturbed the body of this priest should himself be deprived of decent burial: he would meet with a violent death, and his mangled remains would be "carried down by a rush of waters to the sea." Thus, Ingram's violent death and the washing away of his corpse fulfilled the ancient prophecy--the awful threat of the priest of Thetis. No mention was made of the fact that Ingram had not been in possession of the mummy for two years.

Lord Beresford repeated the story in his 1914 memoirs.