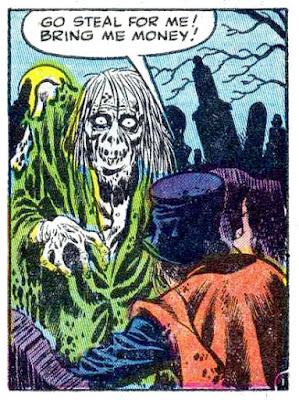 Long one of my favorite comic book artists, Joe Sinnott, like the rest of the Atlas artists, went from genre to genre, including horror comics. These three five-page stories, all from Uncanny Tales, are fairly typical horror: someone does something bad to someone, and revenge is exacted appropriate to the evil deed. Joe does some pretty good ugly faces and walking corpses.

Later in his career Joe did some magnificent inking for Jack Kirby and other artists. We also saw his own pencil and ink art in comics like Treasure Chest of Fun and Facts, and other publishers.

I have gotta be me and point out a fubar in “Find a Pin and Pick it Up!” page two, where the BOOKS sign is supposed to be reverse lettering. Someone wasn’t paying attention. I would have imagined editor Stan Lee looking at it after Joe left the office, then grabbing another artist to “fix this, willya?” as I understood was his wont. Somehow it slipped through to amuse sourball Pappy 64 years later. 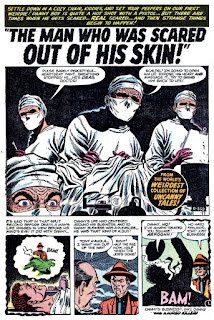 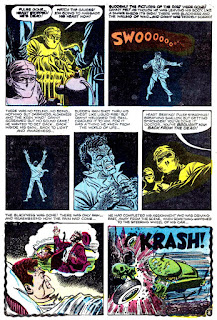 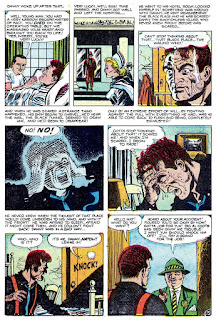 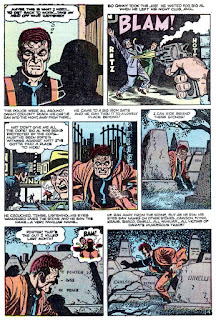 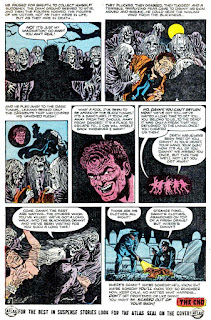 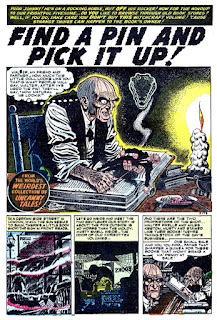 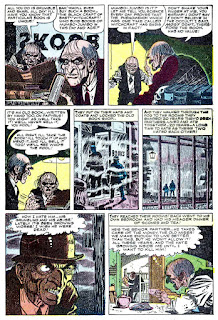 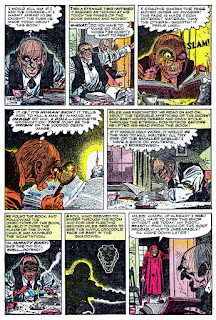 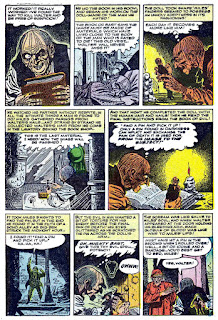 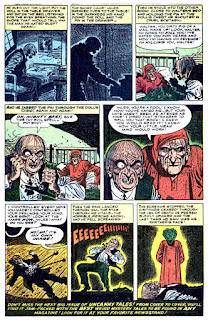 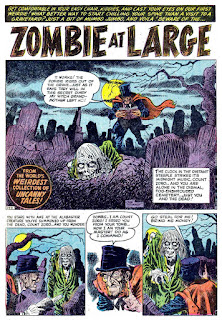 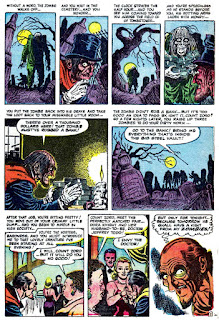 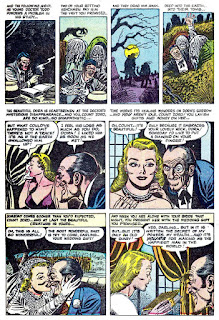 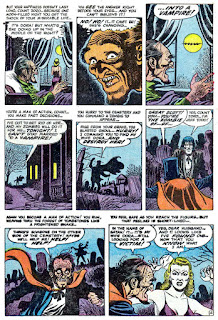 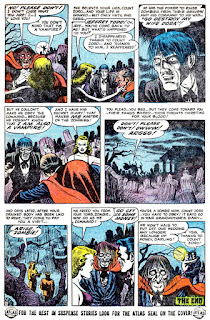 Beautiful work, and, as was Atlas, fun stories. There was a ton-in-cheek nature to a lot of what Atlas did, and a story rhythm that was all their own, second only to EC.

The third story was the best of the bunch; it's more funny than horrific and the dopey expression on our new zombie at the end is great.

Marvel really needs to get some of this into it's Atlas reprint program. They had a enormous amount of material during the pre-code horror days. The Marvel Masterworks Atlas-Era Menace is one of the great reprint books.

Do you ever find yourself adequately engaged in a comic story, and then some little (or less than little) thing takes you out of it? For me, it was the panel in "The Man Who Was Scared Out of His Skin" where Danny found himself running past the graves of the men he had killed. Seriously, what are the chances that they'd all be right next to each other in the same cemetery in a big city? Slim, I'd say. Sure, it made for a good visual, a symbolic moment, and an easy story point, but it was a bit much for me.

Here's something else that stuck in my craw: Why is the ancient papyrus book in "Find a Pin and Pick It Up!" written in English?? I know that's a common comics shortcut, but it's annoying. And another question: Why would the ancient god Bast be slumming in the guise of a decrepit bookselling miser, getting his rocks off torturing and murdering a pathetic old fellow? The ending made no sense.

You've gotta love the English language--such a hodge-podge of foreign tongues, both extant and ancient, mixed together into a beautiful soup. Only in English would you get a phrase like this one in "Zombie at Large": "mumbo jumbo, and voila!"

Obviously, most of my issues with these three admittedly entertaining pieces were with the writing, not the art by "Joltin'" Joe Sinnott, who is the subject of a children's book I own. The gentleman trained professionally under Burne Hogarth and Tom Gill, the latter of whom got Joe into comic books as his assistant. It was in Mopsy #12 that Sinnott's first solo work appeared. He was able to draw so many kinds of comics because, at Atlas, he had to: When he went to the office every Friday to pick up a new script, Stan Lee would just hand him the one off the top of the stack he'd amassed, which was made up of Westerns, sci-fi, war stories, romance, etc. Sinnott was a talented caricaturist from a young age: it started when he drew big-headed people for school publications and matured into doing covers for Bing Crosby LPs. Despite all his advertising work and thousands of comics, Joe felt like he did his best work for the Catholic comic Treasure Chest of Fun & Fact. His time with Marvel is, of course, well-known; less so is the fact that several of his drawings of famous athletes ended up in the National Baseball Hall of Fame.

Brian, I agree about the Menace book from Marvel. One of my favorite reprints. It sits on a shelf within arm's length should I need a quick fix. Sitting close to it: Yoe's book of Jack Cole horror stories, the Fantagraphics black and white EC artist books. I do like horror comics.

Ryan, I think what you describe I would just add into the suspension of disbelief we hope a story gives us. If you can't disbelieve it then the writer has failed, and apparently the writer(s) of these stories failed you.

Of course, when did I ever believe a comic book horror story? Like, NEVER. So I guess I am also aware of the same things you are, but for the purpose of this posting, I was aiming for the more pleasant experience of looking at Joe Sinnott's artwork. I think a lot of fans know Joe mainly for his inking. He did some beautiful inking, but his penciling was also A-level.

Thanks for that short history of the start of the Sinnott career. I knew he worked with Tom Gill, but did not know of his time with Burne Hogarth, where several of his fellow artists also had instruction.

My all-time favorite Joe Sinnott work is the Giant Beatles comic book he did for Dell in the "Beatles Year" (1964.) As a Beatlemaniac, age 16 when it appeared, I appreciated the likenesses he drew of the Beatles. Yeah, they were done from photos, but Joe's clean, clear line and solid inking gave the book an attractive quality which along with his work for Marvel Comics, forever put me in the category of Sinnott fan.

To Ryan's complaint about the book in “Find a Pin and Pick It up”, I will add that the writer has confused parchment with papyrus. A page of human skin might not be immediately noticed as distinct from parchment, which is animal skin (usually that of a sheep). But the consistency of papyrus, which is formed by overlaying strips of C. papyrus, would be so utterly different as to have invited immediate investigation.

Walter's plan is absurdly round-about, but that seems to be par for the course in comic-book stories of supernatural jiu jitsu.

I understand Ryan's reaction to the implausibility of having so many of Danny's victims buried so close one to another, but one might take it that Danny were hallucinating or deluded under the influence of the forces that had drawn him to the cemetery in the first place, that he were misreading the tombstones.

I have a greater problem with Big Al Coots not having thought about the consequences for himself were an unwarned Danny captured by the police.

As I have said elsewhere, as inkers Joe Sinnott and Murphy Anderson performed somewhat analogous rôles for their respective publishers, imparting an attractive house style to the work of different pencillers. As a kid, I especially noticed Sinnott's effect on the appearance of Captain America. There isn't a jarring difference as one moves from Kirby to Kane to Sal Buscema. Nor was the work across pencillers brought into harmony by some sort of æsthetic reduction. I hope that the pencillers recognized and appreciated him.

Joe Sinnott's stuff is always great whether he does the whole job or just adds his wonderful inks. He was easily Jack Kirby's best inker, turning Kirby's solid penciling to masterful illustration. Sinnott was one of the few people to increase Kirby's dynamics with his mastery of line. And any guy that could ghost for Stan Drake on The Heart of Juliet Jones deserves kudos.

Neil, I did not know Sinnott ghosted Juliet Jones. Thanks for that information.

Daniel, one of the theories of using the same inker on different artists would be to give the feature some continuity, because, as I read that Mort Weisinger once said, they didn't want to the kids to think it was a sausage factory operation.

In those days most of the artists weren't identified, but I could tell all of the different Superman artists at a glance...so much for Mort.

I also don't know how much of the pencil drawing that Sinnott had to change or fix in his inking, but it probably depended on the skill of the penciler. It seemed the artists whose work he inked were all very capable. What I am amazed by is how much he actually did. He was not only inking other artists, but also doing his own work. I wonder how many pages a day he could ink? Or how many he personally could draw and ink?