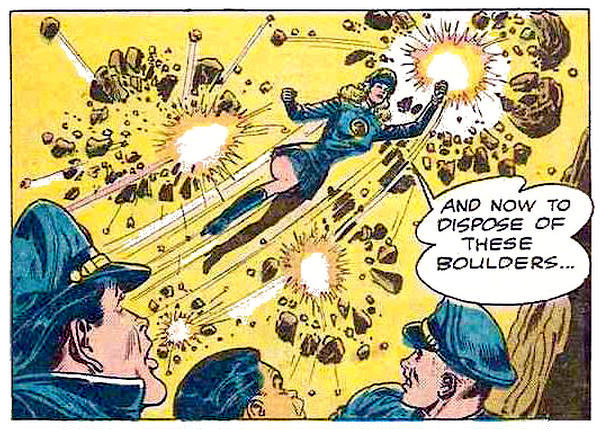 I know I just recently showed an early Blackhawk story from World War II. The war is over for the Blackhawks here, unless you consider the war of the sexes. The reason for showing the story isn’t for the male Blackhawks, but for Zinda, the Lady Blackhawk, considered “one of the boys” by this testosterone troop.

Zinda, who was introduced in Blackhawk #133, was the sole female member of the gang, but did not appear in every story. Just when they figured a little leggy cheesecake might be useful. Zinda, as you can see, has a well-filled out Blackhawk tunic, long legs and a mini-skirt with high boots.

Artists Dick Dillin and Chuck Cuidera got away with some tease (a crotch shot in panel 1, page 6, and the Blackhawks on the same page hanging off Super Zinda, including at least one looking up her skirt.) All of it approved by the Comics Code. 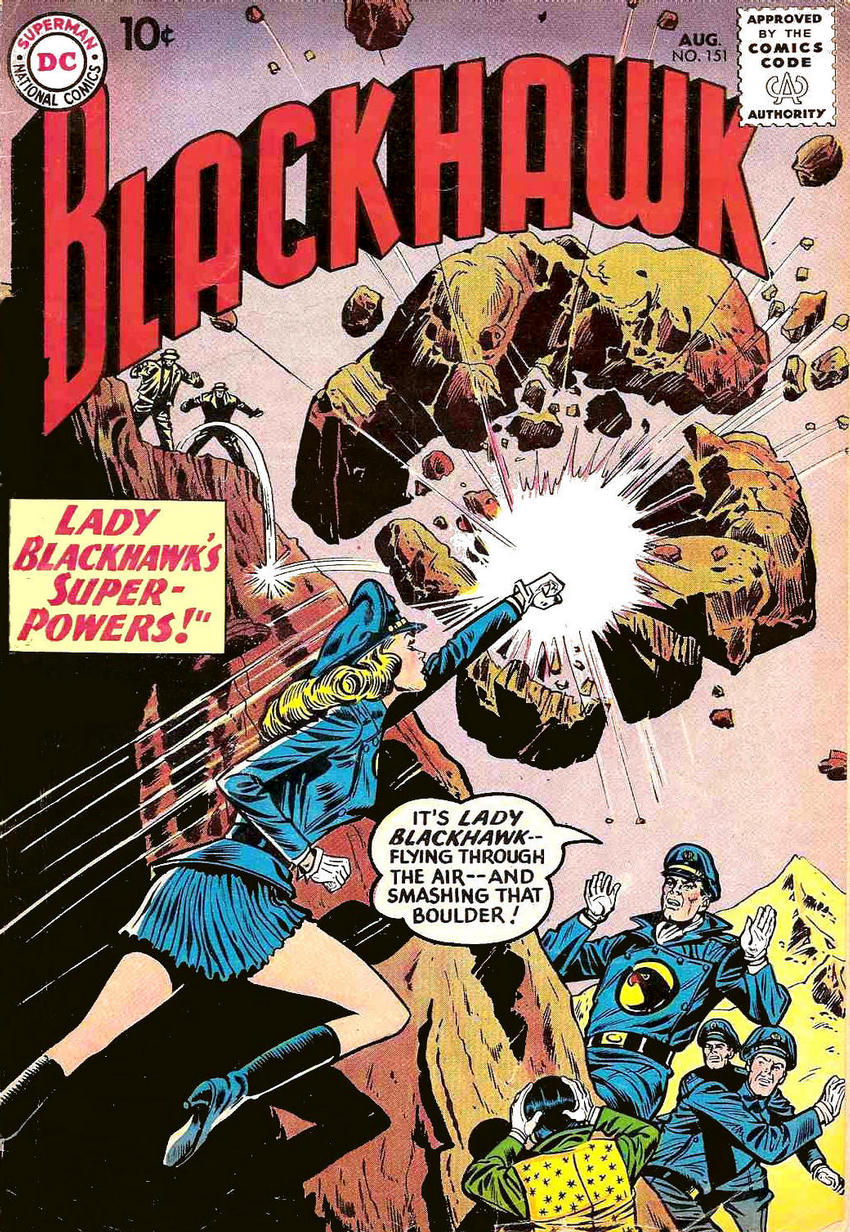 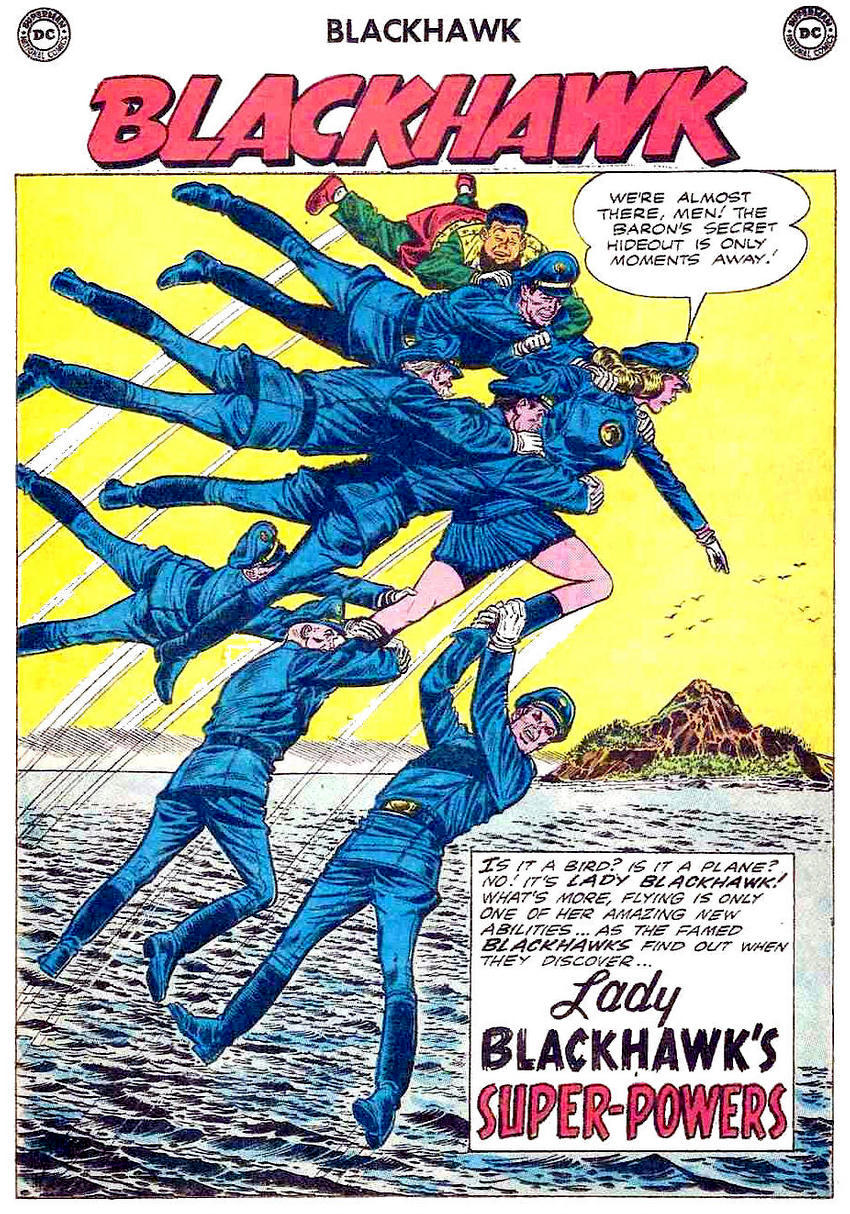 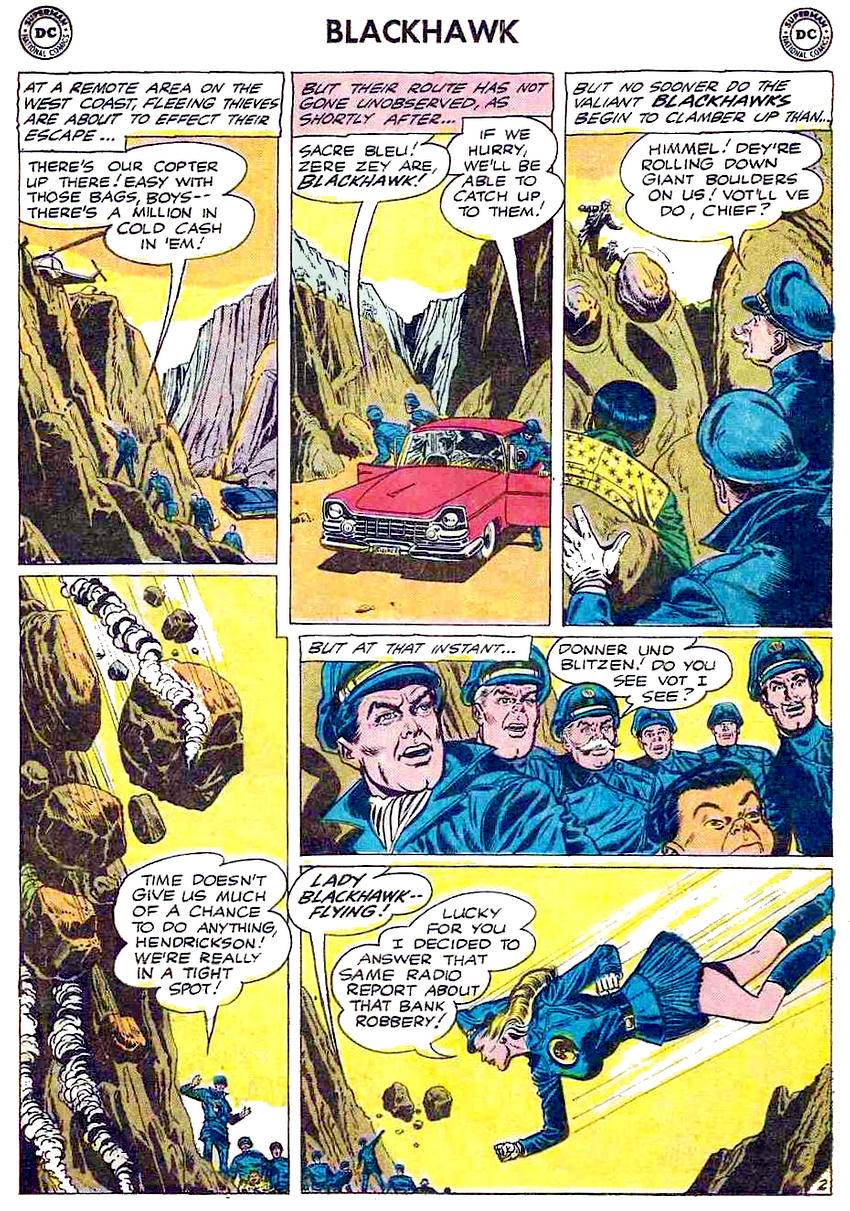 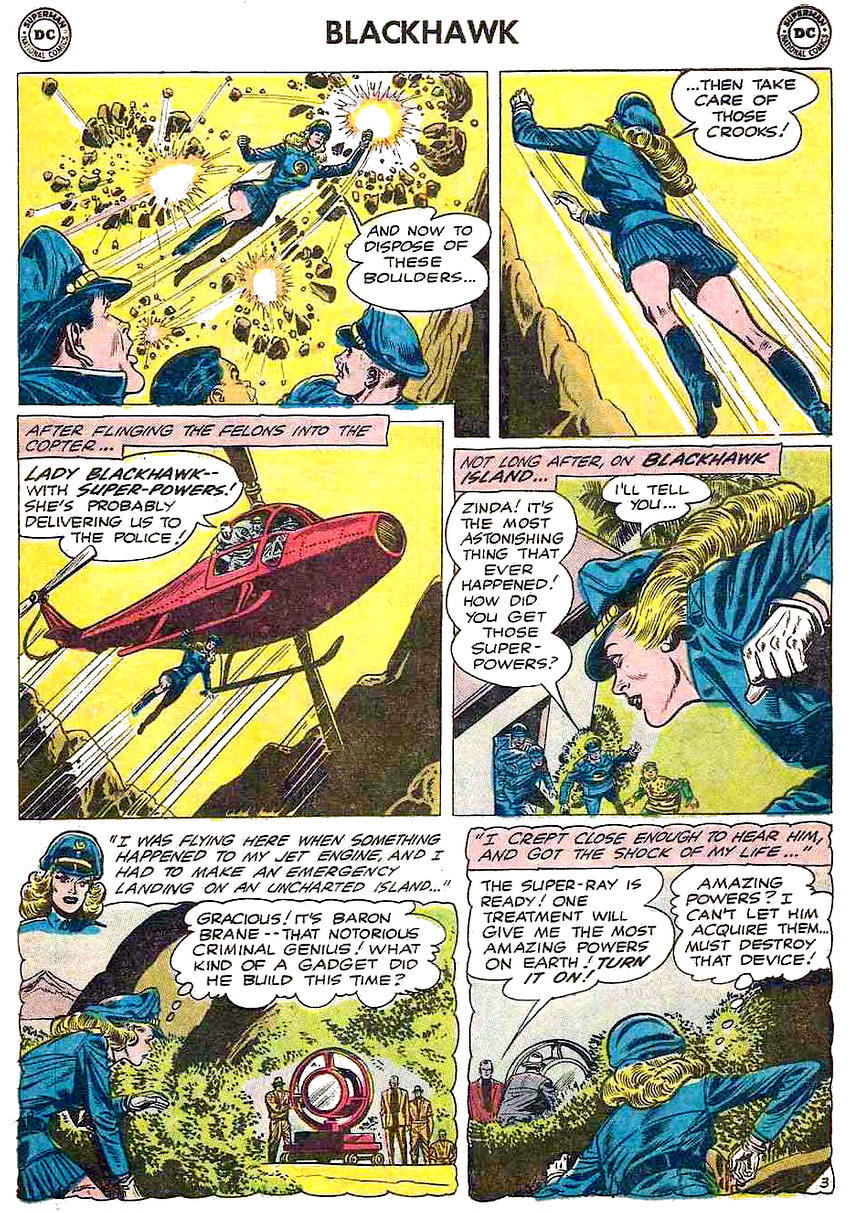 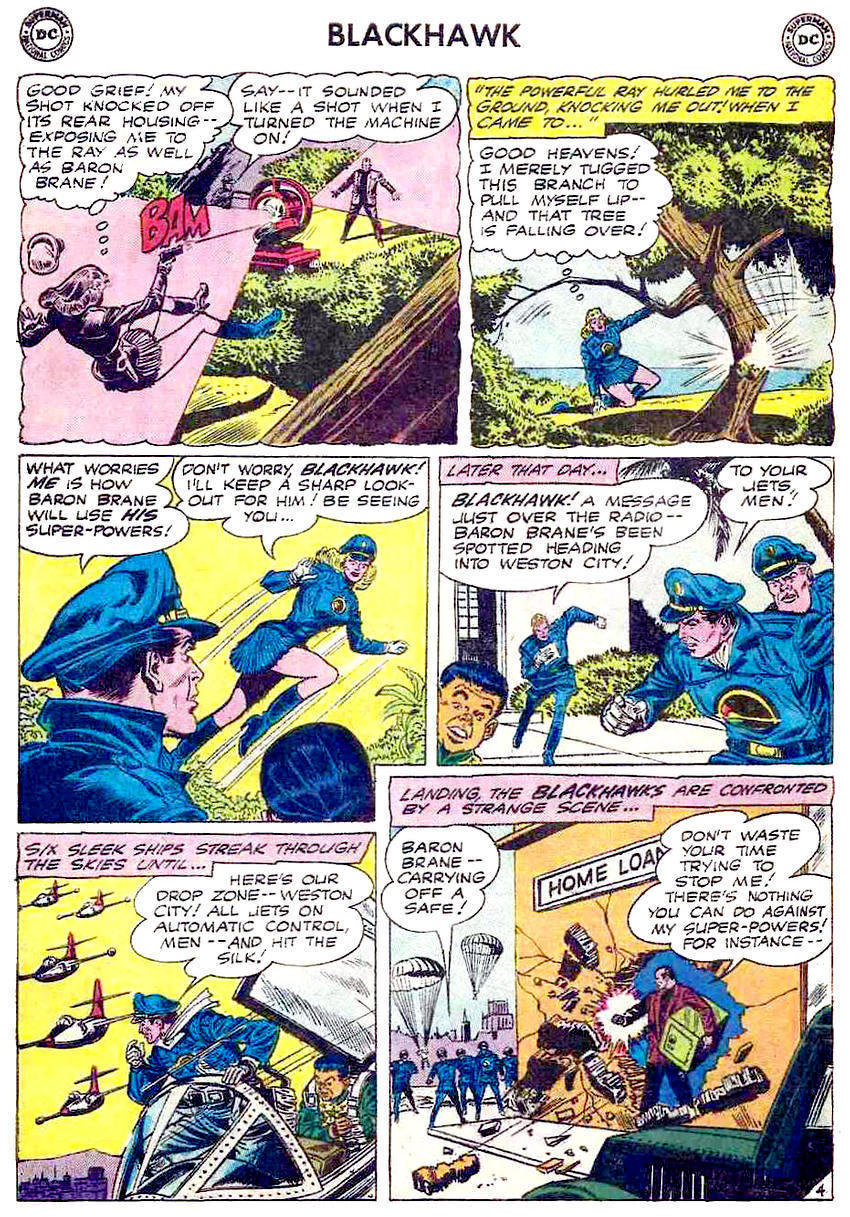 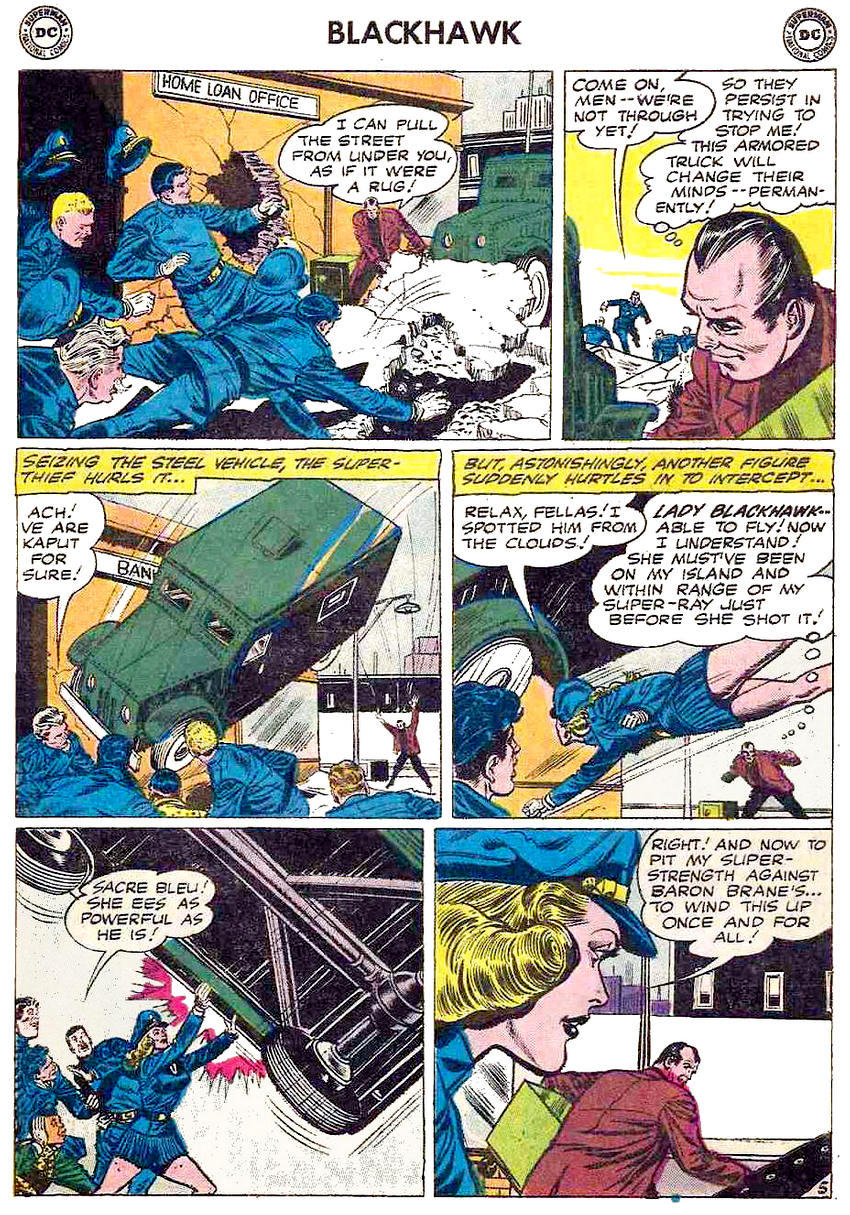 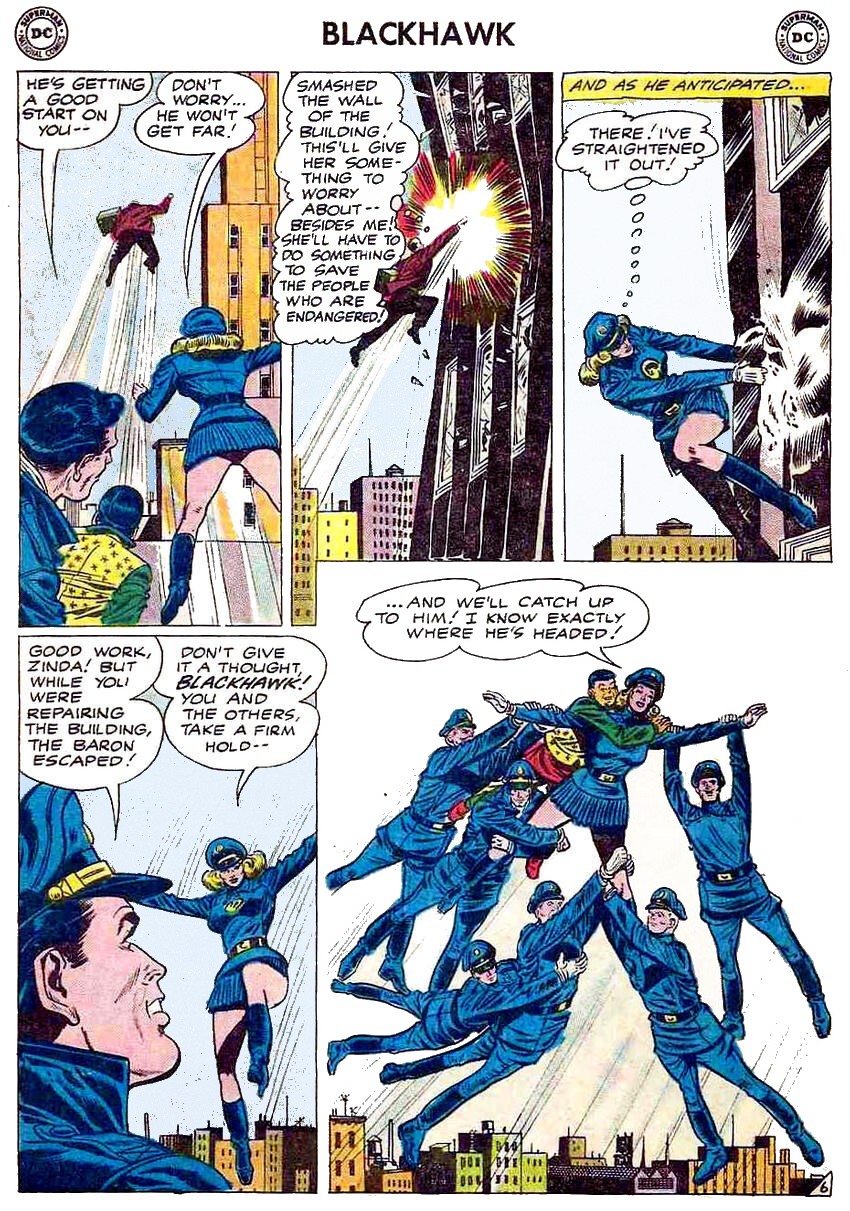 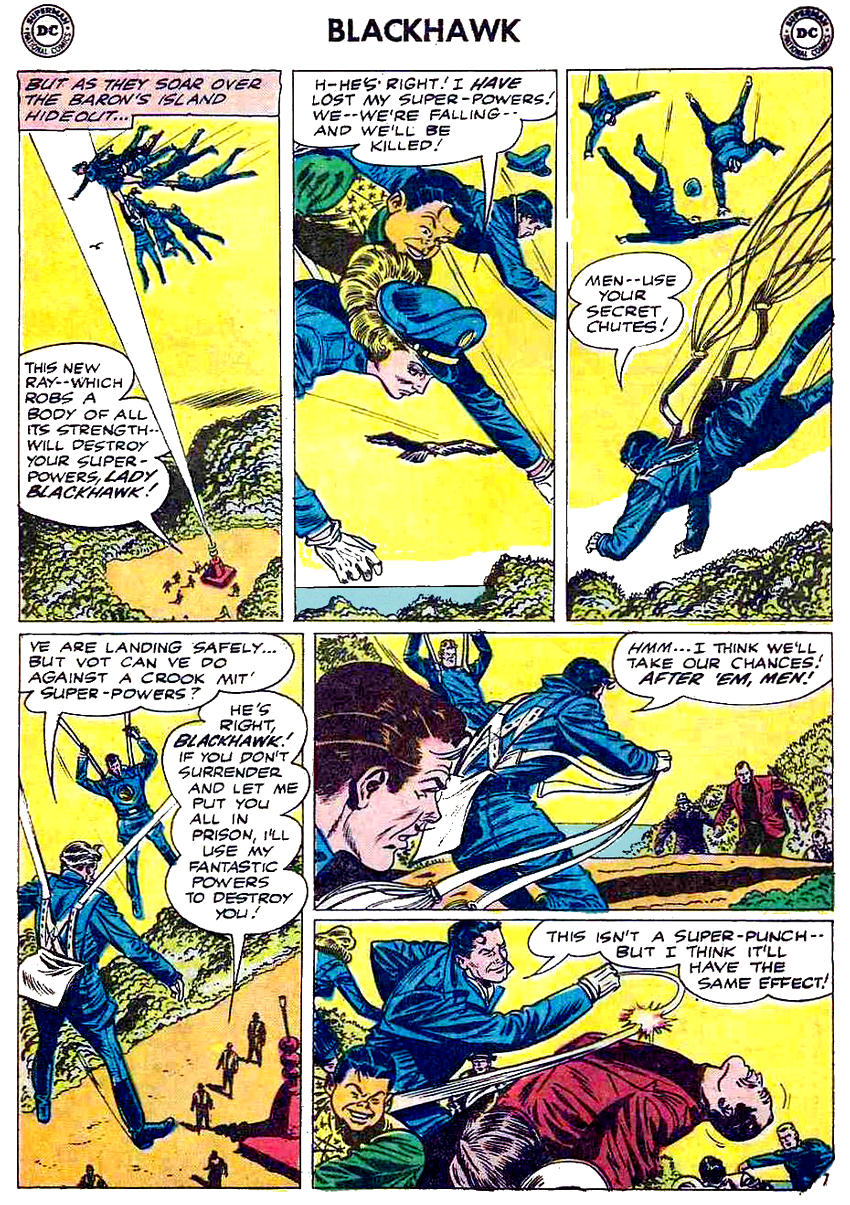 I think one reason I could never get into 60s DC, but was a huge 70s Marvel zombie, is DC's use of the reset button. Anything interesting that happens is always erased at the end. There was never any issue-to-issue flow. Things happen, then their opposites happen, and the issue ends.

This is a text-book example of that.

Of course, if you were there for the babe, then this was the issue for you!

I've always liked Lady Blackhawk's early appearances. Like Batwoman, she had some "girly" moments that make her anathema to modern feminists. Yet for whatever reason, the writers kept using her, and like Batwoman I'd say she was handled well more often than not. Back in the day I was aggravated by any story in which a character gained super-powers virtually identical to Superman's, and this is right up that alley.

Gene, I don't think Lady Blackhawk was introduced to get girls to buy the comic book. Or was she? I could be wrong (I often am.)

It was my opinion that with her little outfit which almost screams fetish! she was designed for the young men (and boys) who read Blackhawk. I have a couple more issues of Blackhawk with Zinda, so maybe next year I'll show one of them.

Brian. from a conversation I had with Otto Binder 44 years ago I believe that Mort Weisinger (then Superman editor) was of the opinion that kids didn't collect comics as we understand it. I think it was an institutional belief that DC thought readers were impulse buyers who picked up comics with covers that intrigued them. It's when letter columns became common that I believe they understood some of their readers actually cared.

I forsook DC for Marvel in the early '60s, then went back to DC in the '70s, forsaking Marvel and their endless crossovers. I'm fickle. Sue me!

U no Otto Binder? OMG thats so badass yo OMG

It's worth pointing out, I think, that though Quality toyed with the idea of a female Blackhawk (in Military Comics #20 (July 1943) and Blackhawk #40 (May 1951), it wasn't until DC leased the feature that Zinda appeared. In her debut, she wore blue tights as part of her uniform. No reason was given for her costume change in her second appearance, but I don't think her tights ever returned?

Since Gene mentioned Batwoman, note that she received temporary superpowers in World's Finest #90 (Sept-Oct 1957).
Thanks!

Darci, you are a comic book encyclopedia. Thank you.

Pappy's definitely right that DC always went for the impulse buyer. That's why, years later, there's far more attention-getting lunacy on Silver Age DC covers than on those of any other company then publishing.

Marvel and most of the other publishers in that period almost always played to action-lovers in the audience. I'd guess that this was the format used by the majority of comics-covers in the Golden Age. DC used a fair number of these, and even their "goofy" covers are nowhere near as weird as those of the Silver Age. Hmm, maybe it had something to do with forty-plus DC writers and artists trying to figure out what kids would buy-- and no longer able to relate to the charms of pure action at their respective ages?

Gene, I'm my own best example: staring at the cover of Mystery In Space #36 on the drug store comic spinner rack, and so caught up by the Gil Kane/Jack Adler cover that of all that week's comics, I just had to have that one.