Number 1644: Can an invisible voice be heard? 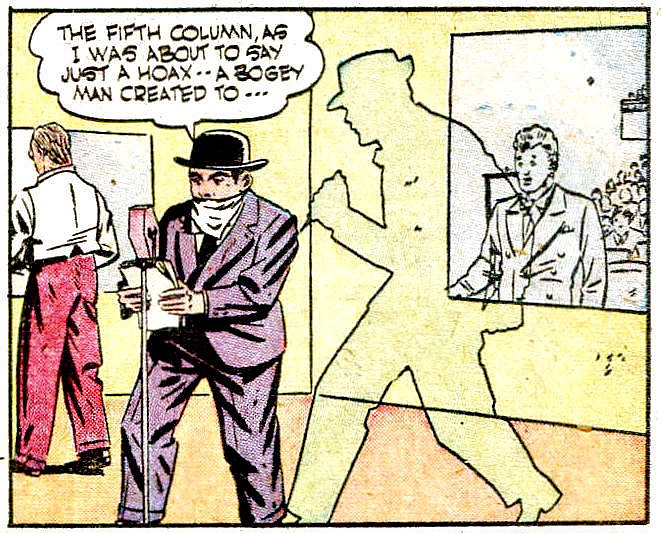 The Voice is another character from Dell’s Popular Comics. This story, drawn by Jim Chambers, is from Popular #59 (1941). It is the issue that also featured the Marvel Man story I showed in Pappy’s #1612. The Voice throws a special cellophane cloak over himself and becomes invisible. The character is prophetic. According to several sources* technology is making such an invisibility suit a reality.

I doubt that total invisibility (as in the fantasies I used to have as a junior high kid wondering about the girls’ shower room), is achievable, but in some form, who knows? High-tech camouflage might work for soldiers hiding on a battlefield in plain sight. Some claim the technology is here now, but I'd have to “see” something invisible to believe it. 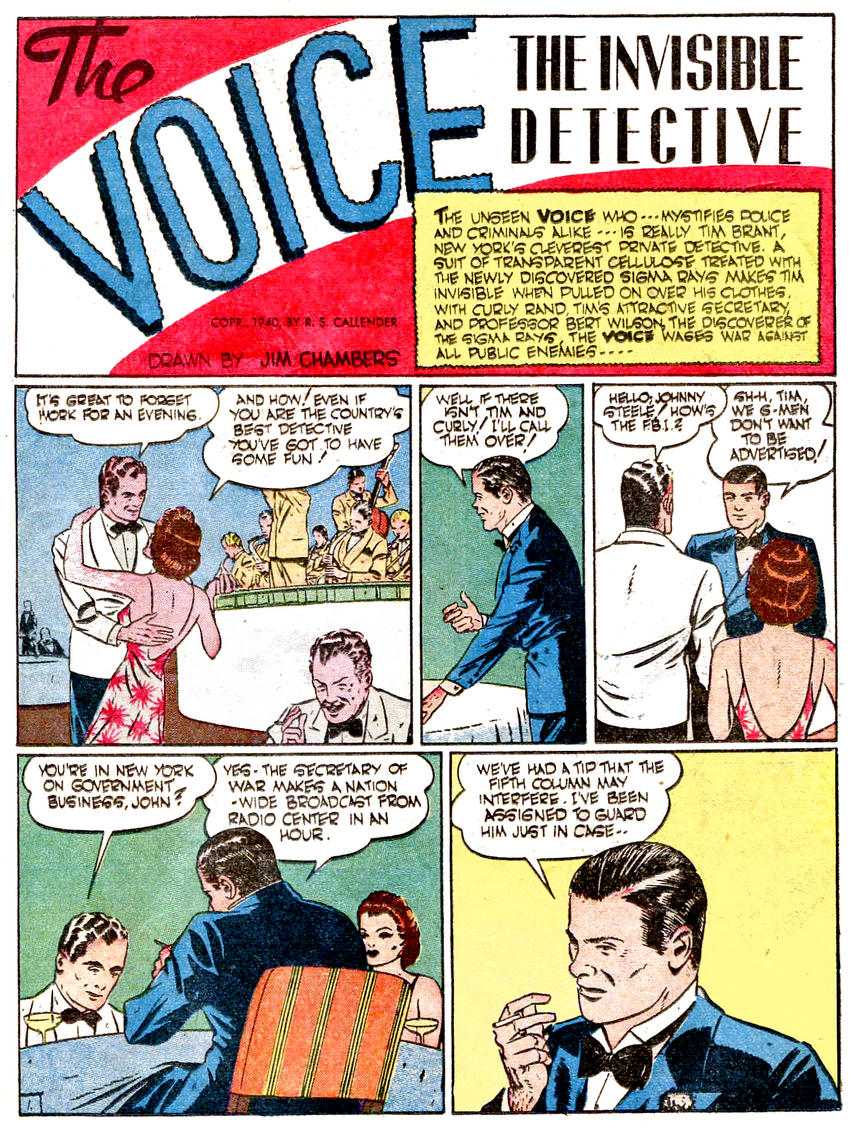 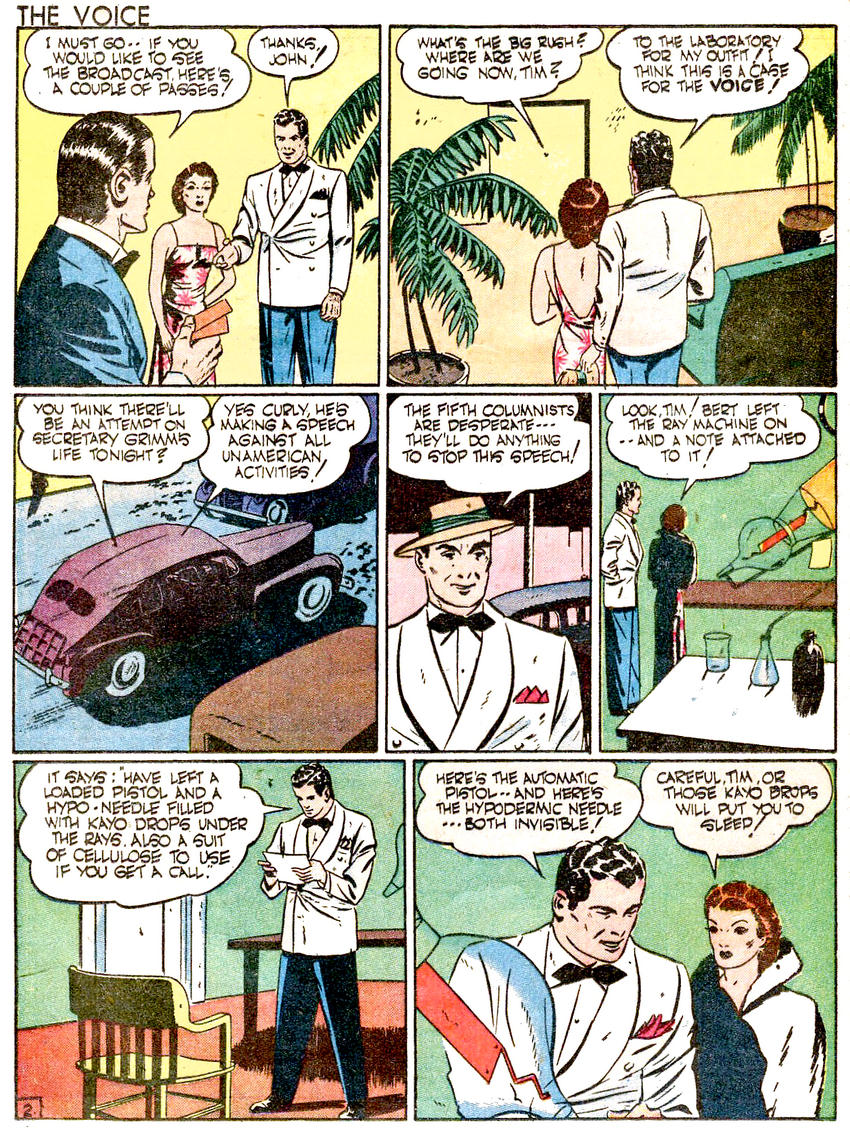 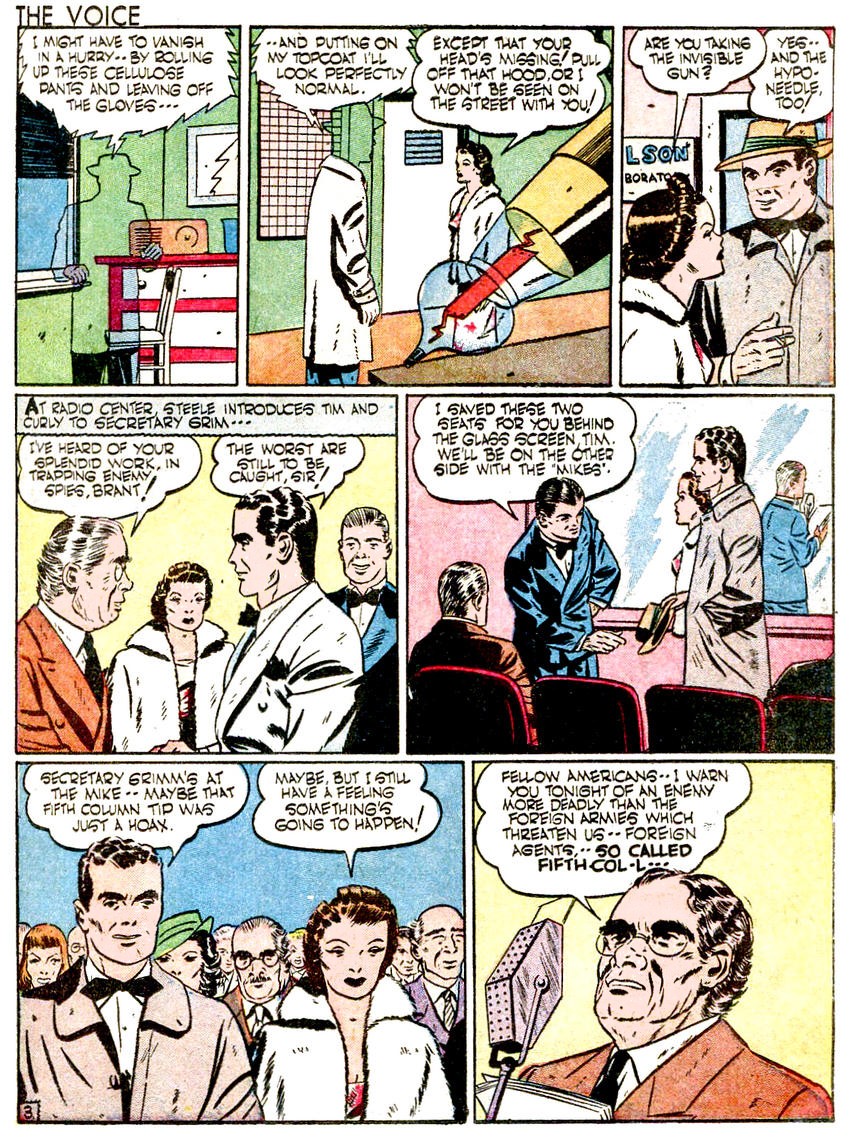 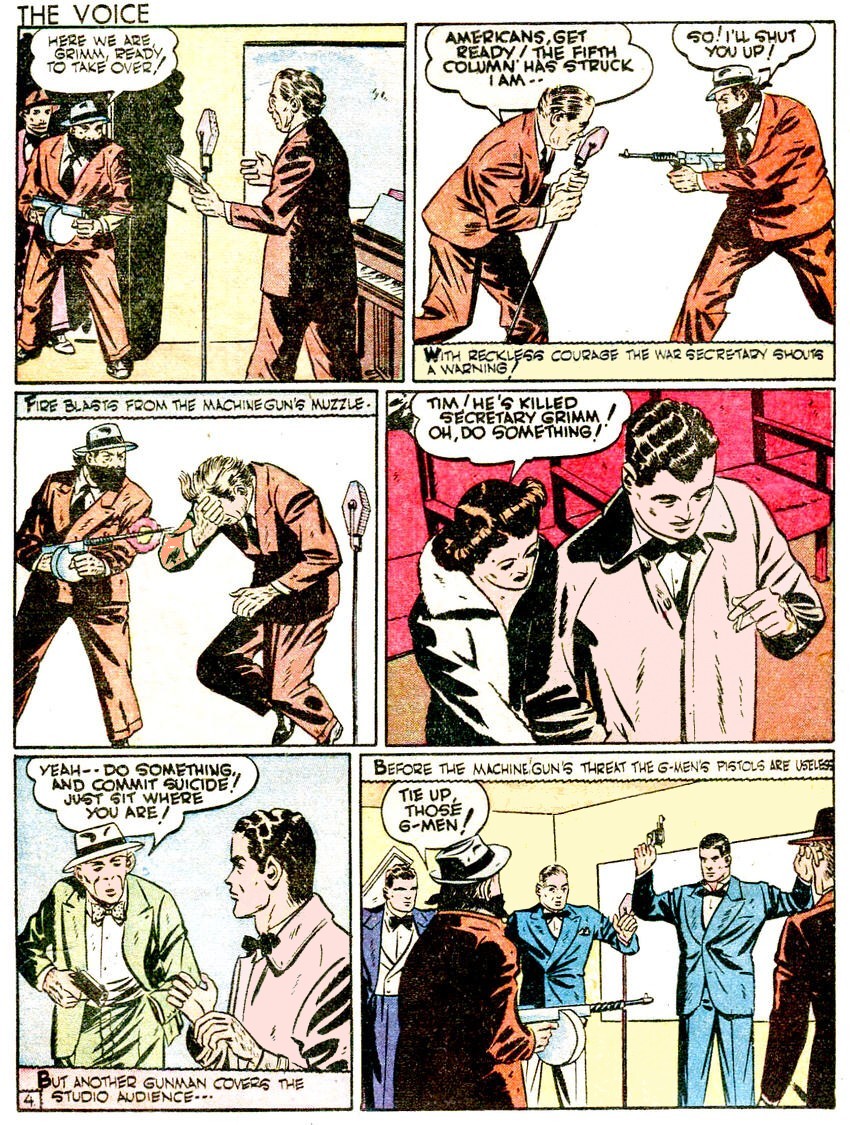 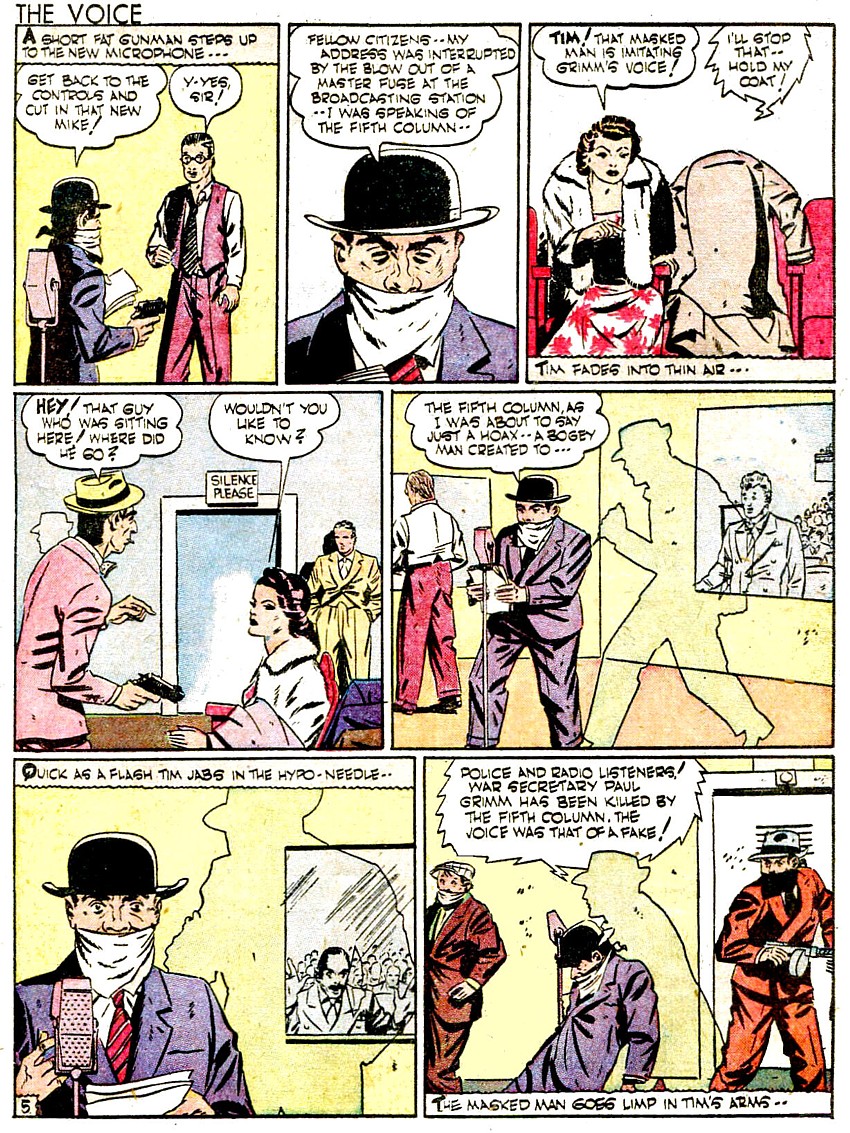 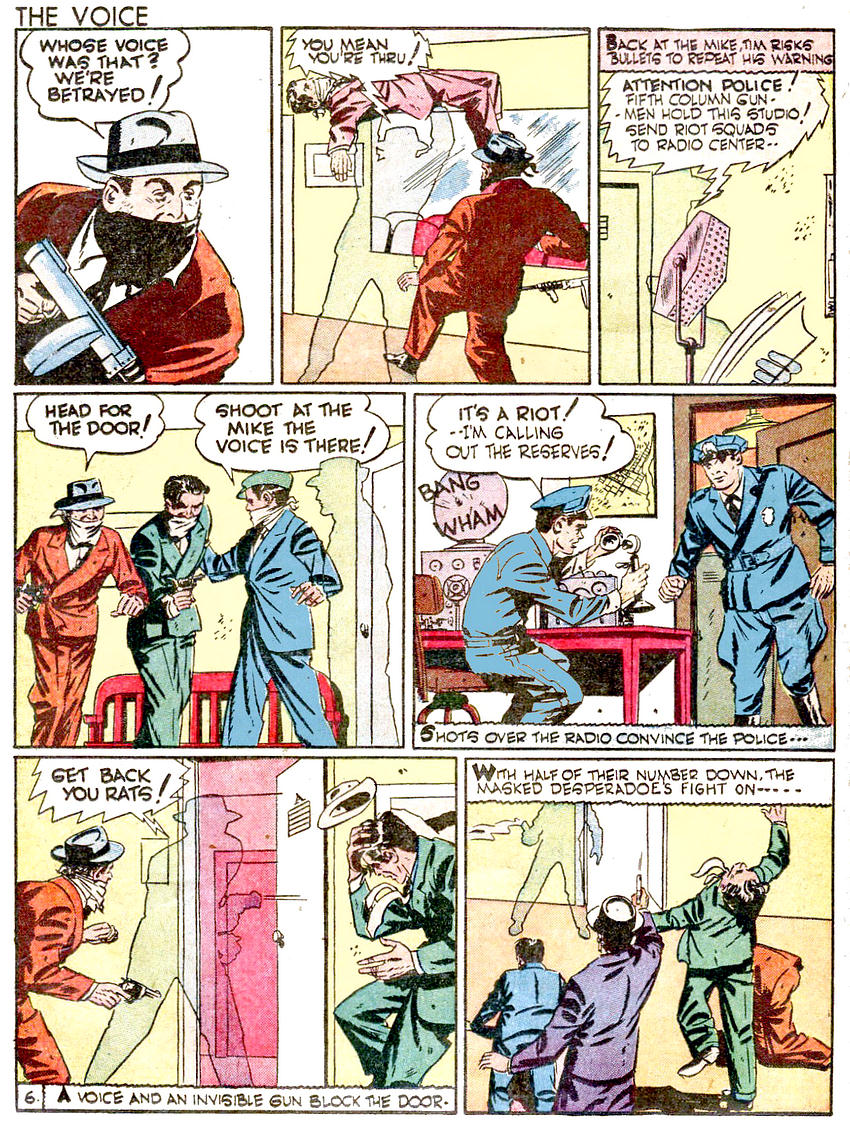 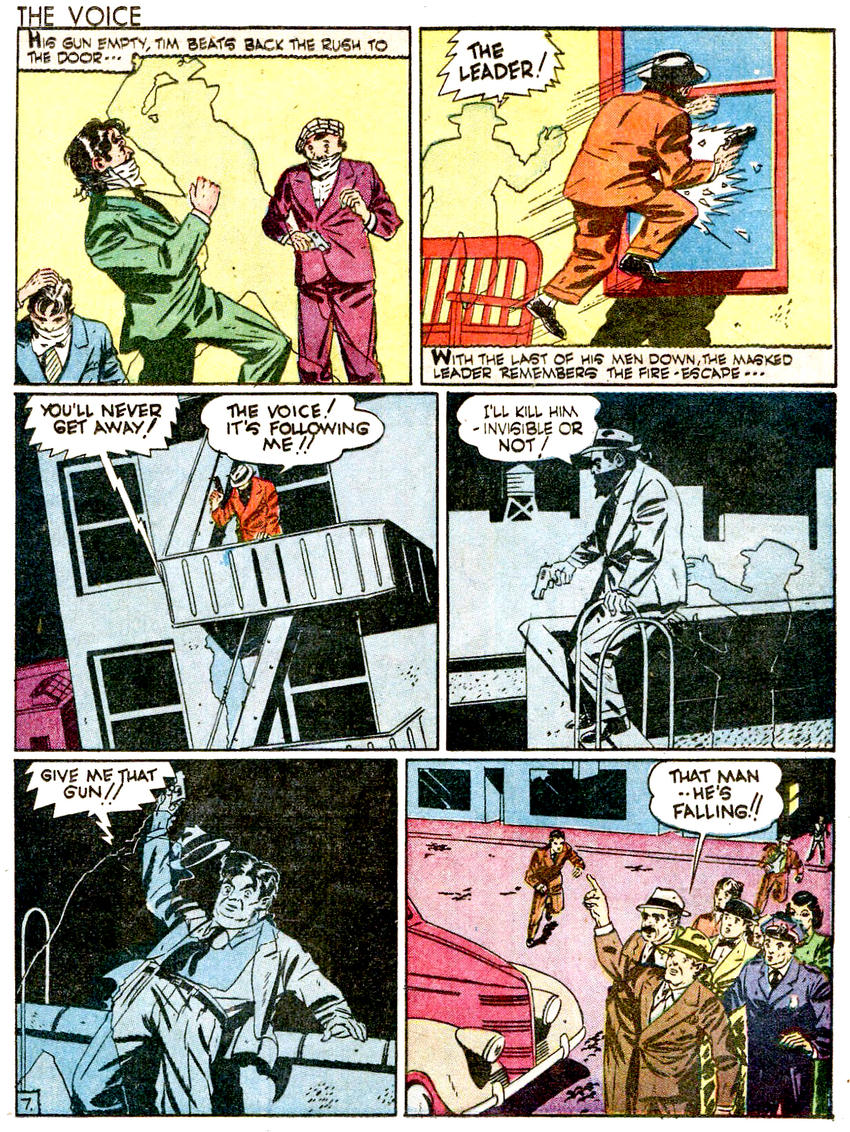 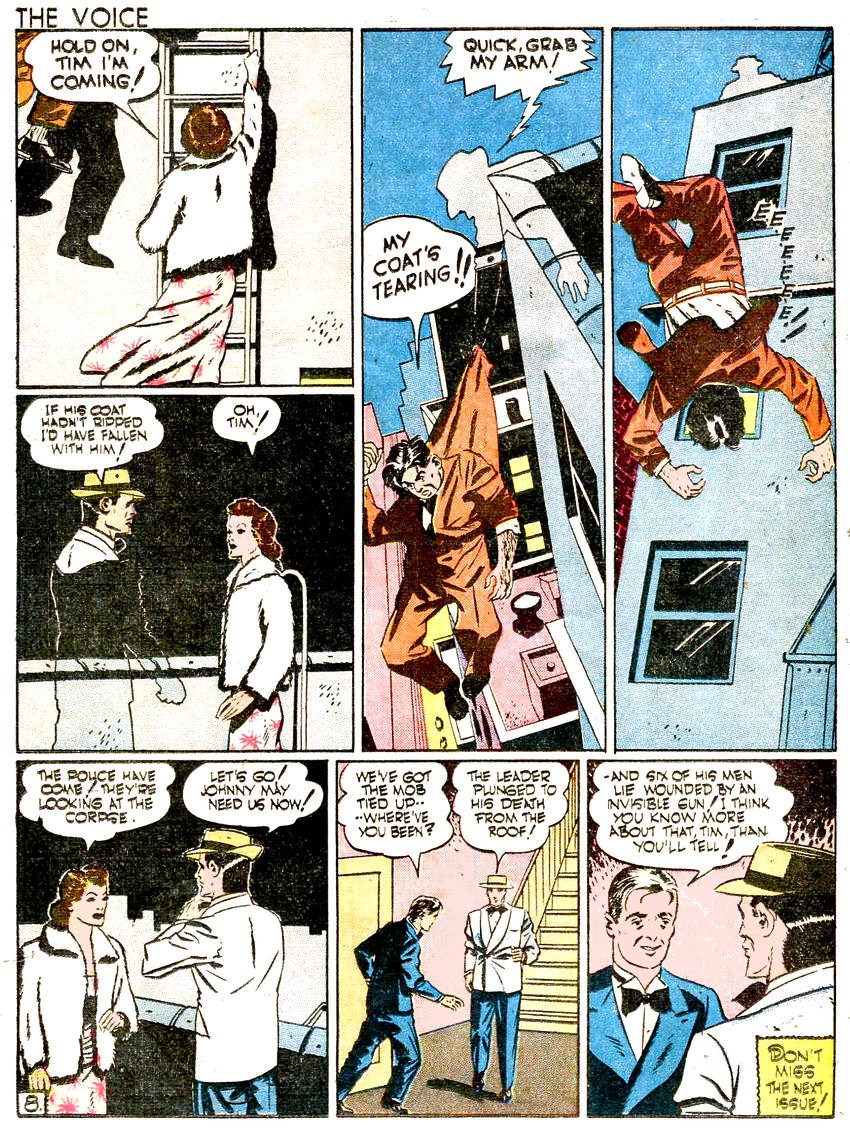 *We all believe everything we read and see on the Internet, eh?
Posted by Pappy at 12:01 AM

OMG Pappy this comic story's subject is like in tha news 2day yo: http://guardianlv.com/2014/10/invisibility-cloak-breakthrough-by-scientists-at-university-of-rochester/ OMG Hears a video: https://www.youtube.com/watch?v=_EB6WYo6d-s

OMG Pappy we lern a lot frm ur blog yo OMG! XOXOXOXO

I dig the detail on page 6, panel 3 where the invisible Voice guy, warning at the radio microphone of fifth column gunmen in the studio, holds the invisible papers of his script or "copy". Evidently you can't announce things on radio without a script and an invisible man can read invisible papers written, no doubt, in invisible ink. Heh. These are things I would never have come up with myself. I got to admire it.

I had never heard of the term "fifth column" until I read a Fletcher Hanks story a few years ago. Evidently the term was in the media of the late '30s and early '40s. It certainly wasn't in any of many comic book stories of the'60s I read where it could have been used. I understood the term quickly enough in that Hanks story but immediately began wondering about columns 1 through 4. Looking it up, it had to do with an attack on Madrid in the Spanish Civil War of the late '30s. One thing I notice about fifth column guys: not very good looking.

The Voice guy could mass produce his invisible outfit and come up with a sixth column! Get Martan the Marvelman (and his faraway Planet Antaclea buddies) and Dr. Hormone from that same 1941 Dell comic and they could have seventh and eighth columns. Sky's the limit in my (comic) book.

Alicia, thanks for pointing this out. It makes me look like a prophet or something, but it is an honest coincidence. Since I work two months ahead I posted this in early August to appear October 15, not knowing it would coincide with the article you link to. Fascinating stuff...they blinded us with science!

7f7, I have always thought of a fifth column as a group of saboteurs, working inside a country at war. I did not realize the term came from the Spanish Civil War, as the Encyclopedia Brittanica entry explains.

As for reading invisible pages in invisible ink, that looks like an editorial oversight there, but who knows? I am still exploring invisibility in my own case. I must warn you younger readers that as a person ages they begin the process of becoming invisible. Trust me, it happens to me every time I go into a store and need a clerk's attention, or anytime I am in the line of sight of a beautiful, younger woman. Voila! I'm invisible, and the older I get, the "invisibler" I become.