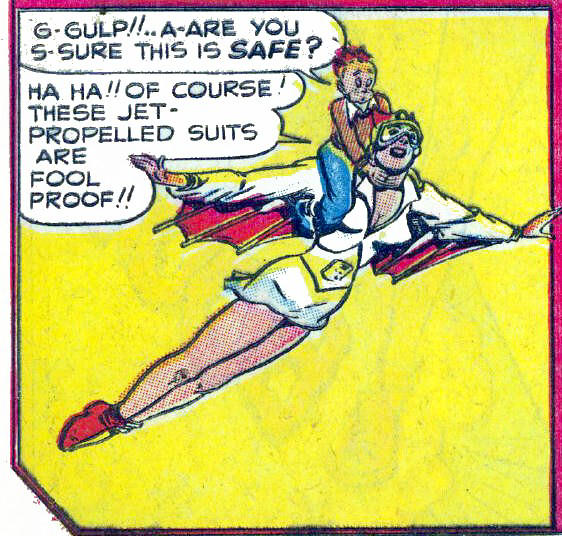 “Atoma” is a one-shot filler, published in Harvey’s Joe Palooka #15 (1947), drawn by the prolific Bob Powell studio. It is an experiment, and the editors ask if the readers would rather see it or the regular feature by Powell (referred to as “our artist”), “Chickie Ricks, Better Known As The Flyin’ Fool”...Atoma never appeared again.

The problem as I see it is the strip is too gimmicky. Like a radio play Atoma describes things we readers can’t see. The only panel with a background is on page one. Comics are a visual medium so the reader is cheated. I don’t know what would have happened if the strip had continued; would it have continued without backgrounds, and that clever way of numbering the pages? I like the comely Atoma and the giant robot, but as a comic book story I’d call it an interesting idea that just does not quite work. 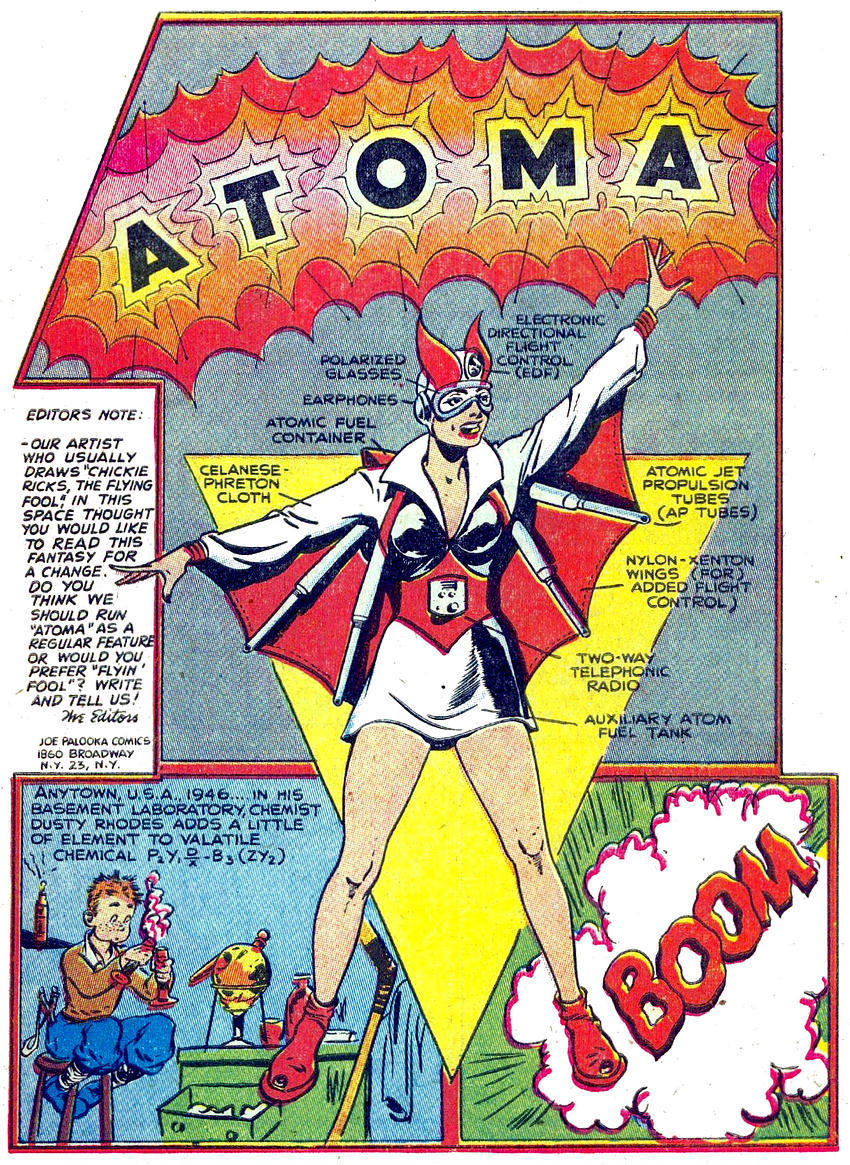 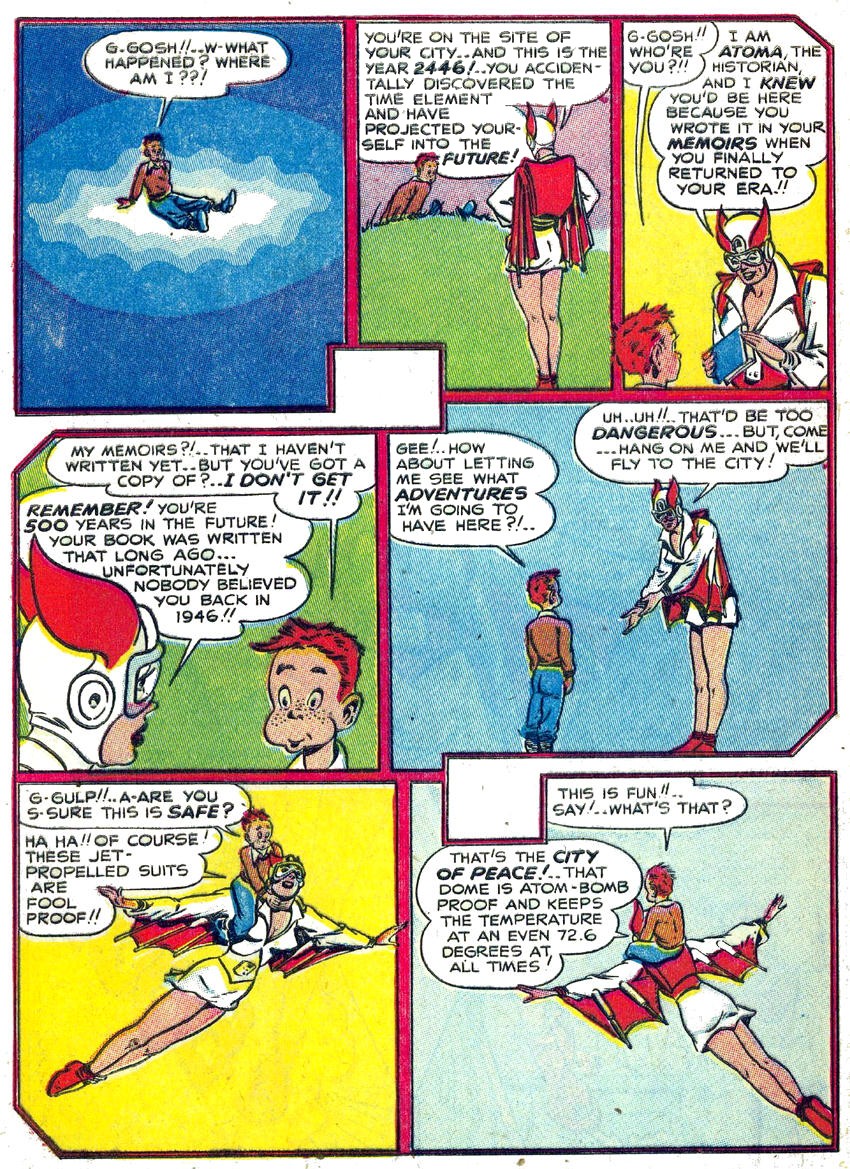 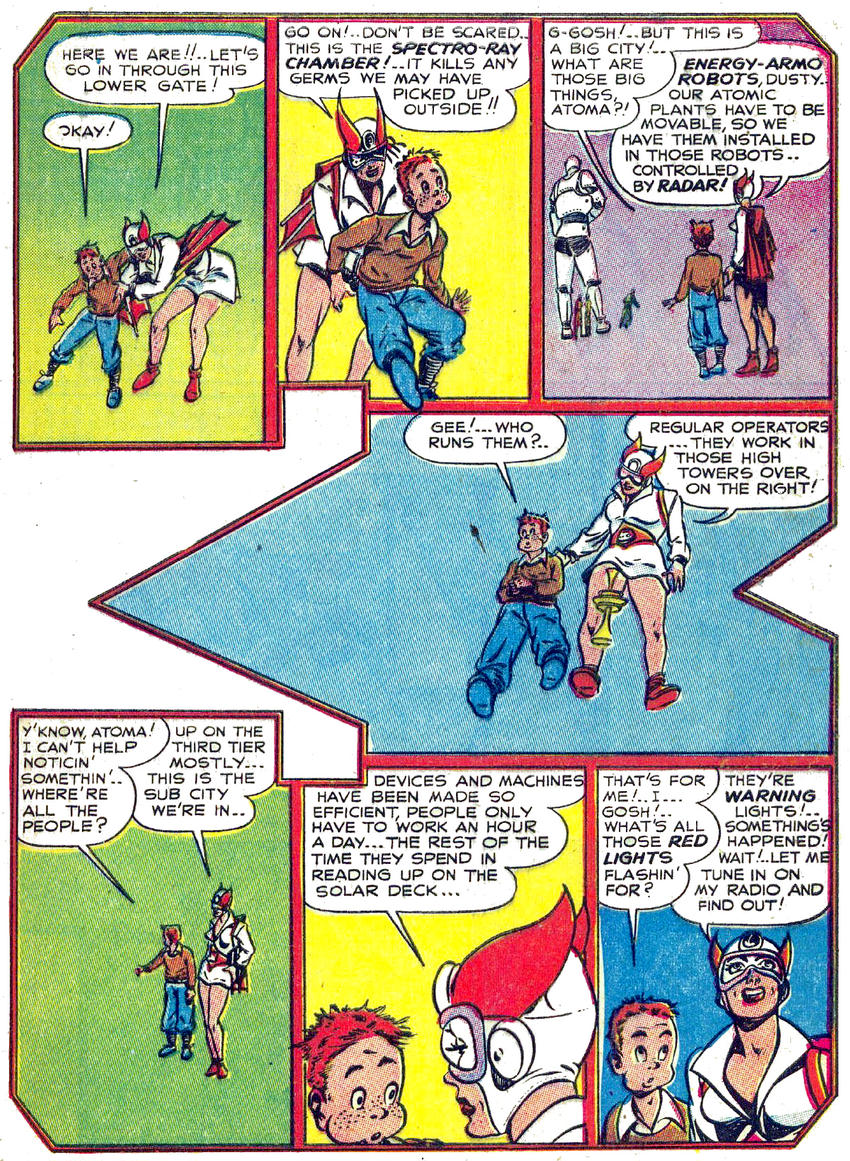 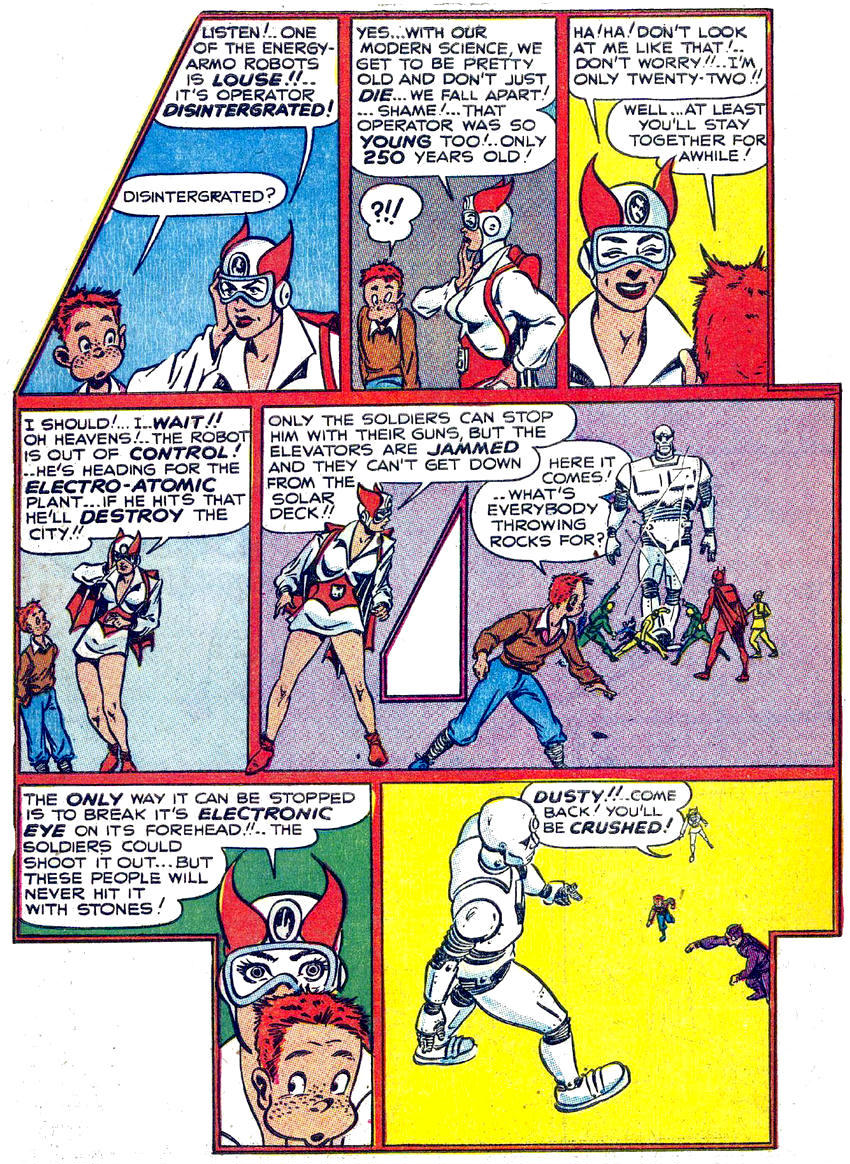 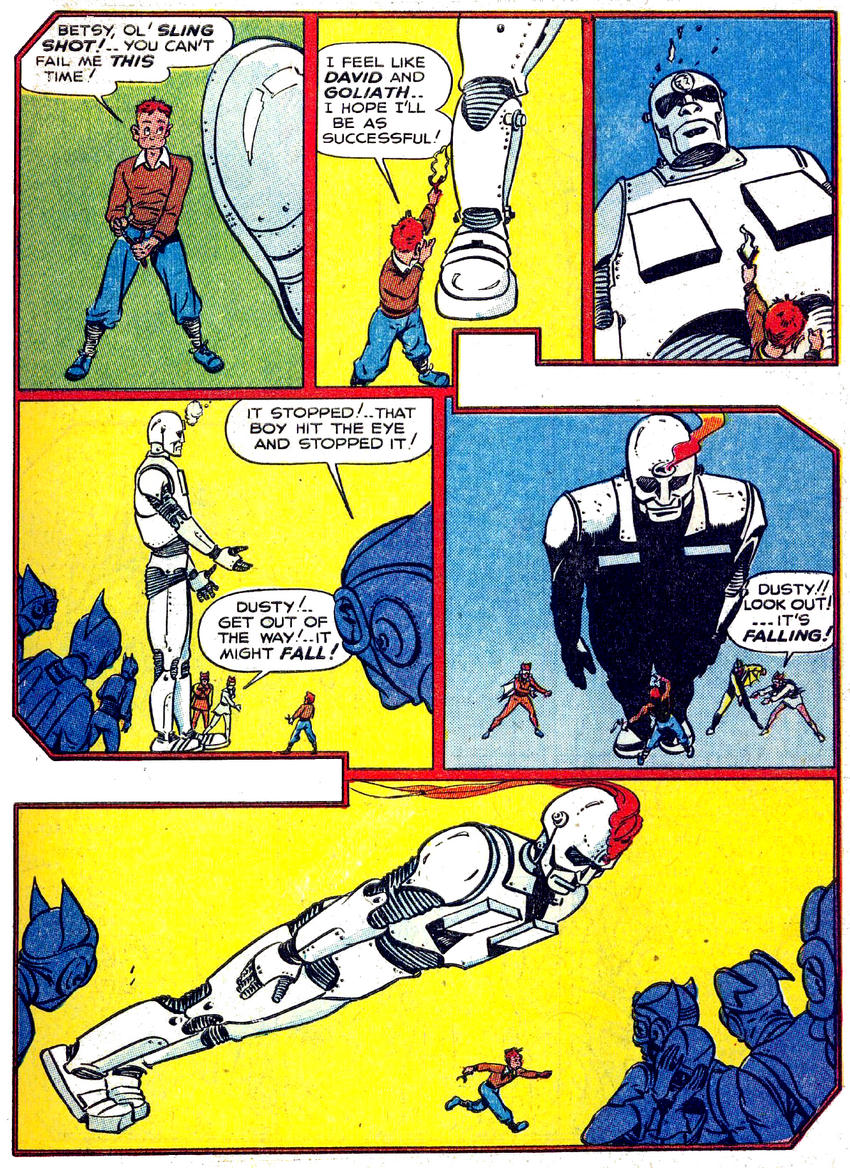 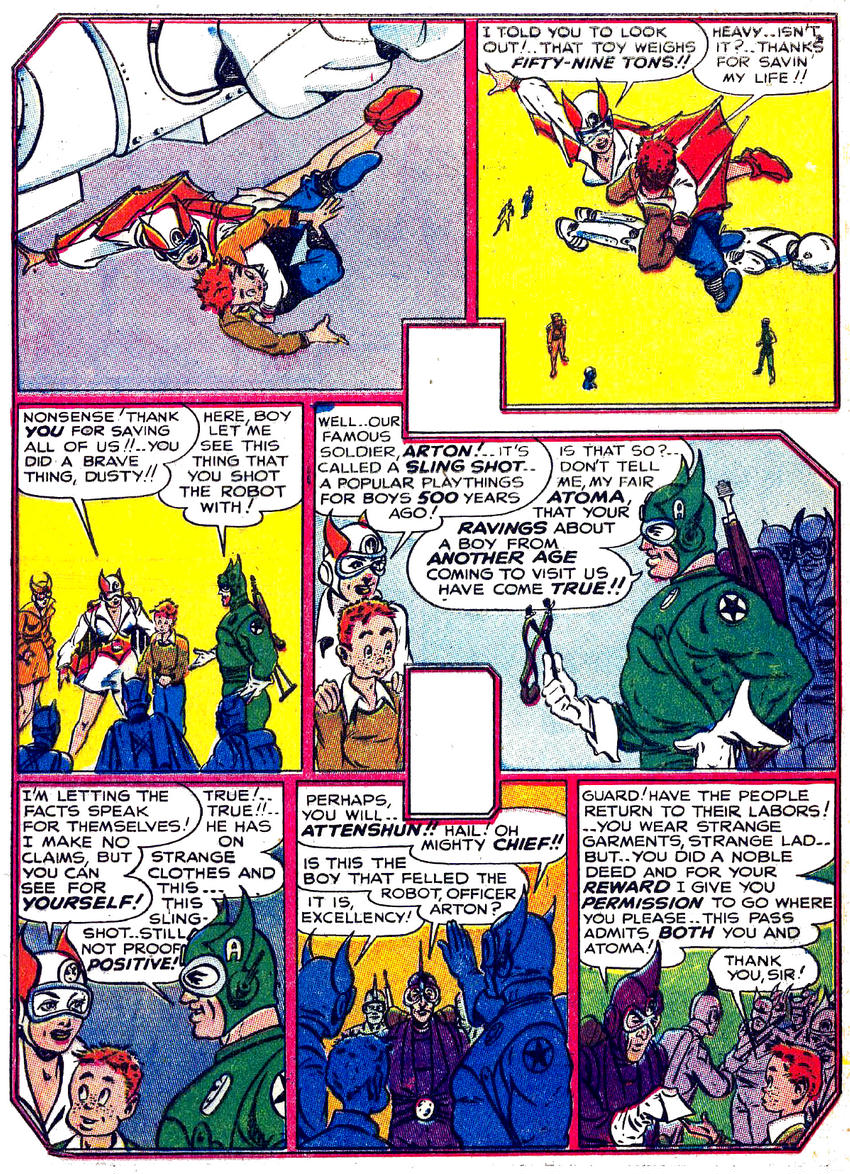 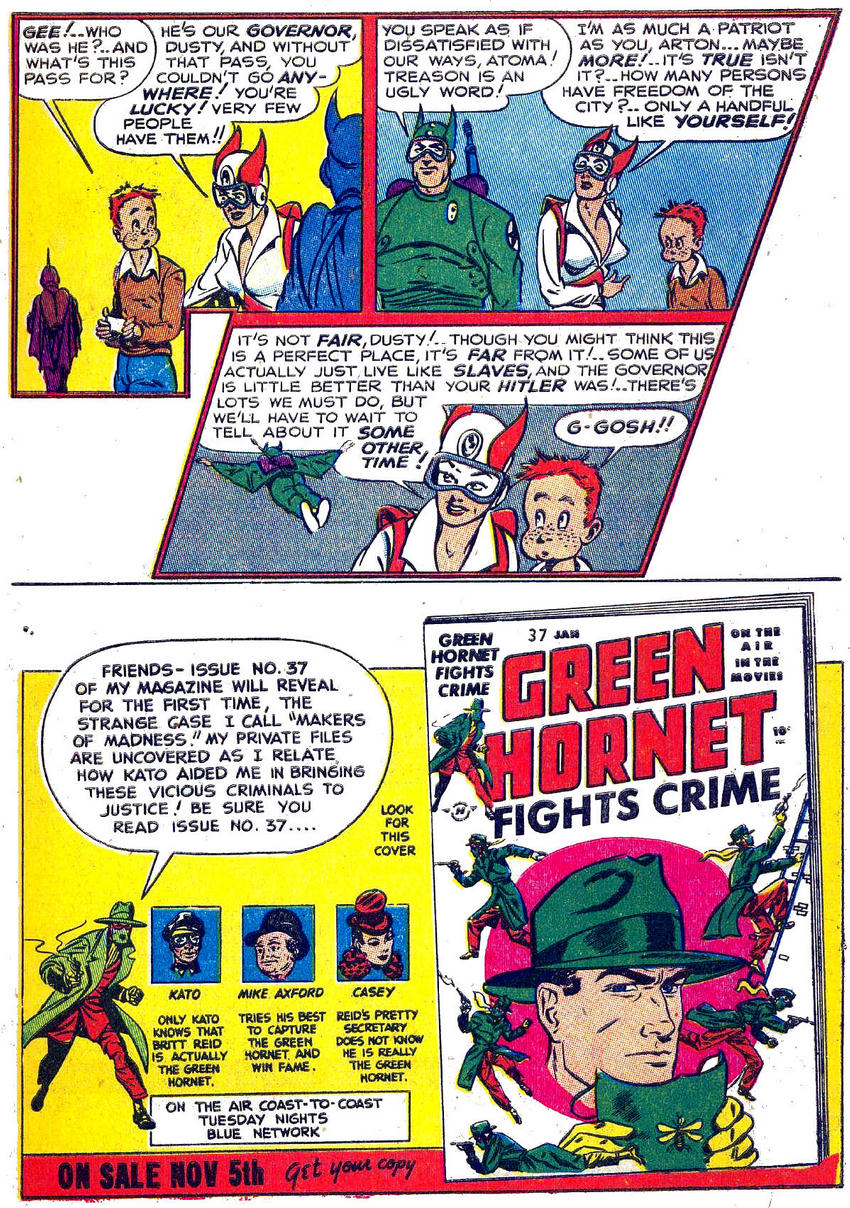 Her lower girly bits being the "auxiliary atom fuel tank" may not have appealed to the prurient Interests of the male readership.

"Auxiliary atom fuel tank" pointing directly at her crotch? Somebody was having a bit of fun with the art. Wertham would have choked on his own tongue if he saw that, not to mention I hope she doesn't plan on having kids!

I'm in agreement with you, this is a weird thing. The missing backgrounds seem to be by design, but there's no reason given for it. Did Powell think it would interfere with the number-panels? Too busy? It obviously a conscious decision.

Powell has a problem with miniskirts, if it's flared, there wouldn't that much definition there. Don't take that as a complaint, just as part of my ADD :)

The Hitler/Tyrannical future thing comes out of nowhere! Why even bother setting that up in what seems like a pretty innocent young boy fantasy strip (saves the day, gets the sexy older (gasp 22!) woman.) Just let him have adventures riding a woman like a pony (again, paging Wertham!)

Brian, UU, I didn't mention the "auxiliary atom fuel tank" because I hoped someone would pick up on it. And you did, didn't you, guys?

I was a bit surprised by the totalitarian future subplot, but I won't guess at the motivation. The story did not get told, whatever it meant

You're right about the story not really working, but I love Powell's art from this period, even more than his fifties work, which seemed to stiffen up, compared to the energy and bounce of the forties.

We recently lost Lauren Bacall, and I recall a reprint of a Powell story that was an homage to her. It was an airplane story, wherein this sultry lookalike kept asking for a light for her cigarette. In fact it was titled something like "Got a Match?" Powell had obviously just seen Bacall's debut in "To Have or Have Not" and the experience broke his brain.

One of the energy-armo robots is LOUSE!! That was a nice line. Your typical name-a-giant-robot-after-a-tiny-insect kind of lettering mistake. Atoma's aux. atom fuel tank, Louse the Robot —a letterer with tongue firmly in cheek? Kids those days! What was to be done with them?!

The fins on the futuristic headgear is a plus.