Number 1630: Rangers of Freedom and the art of sockology 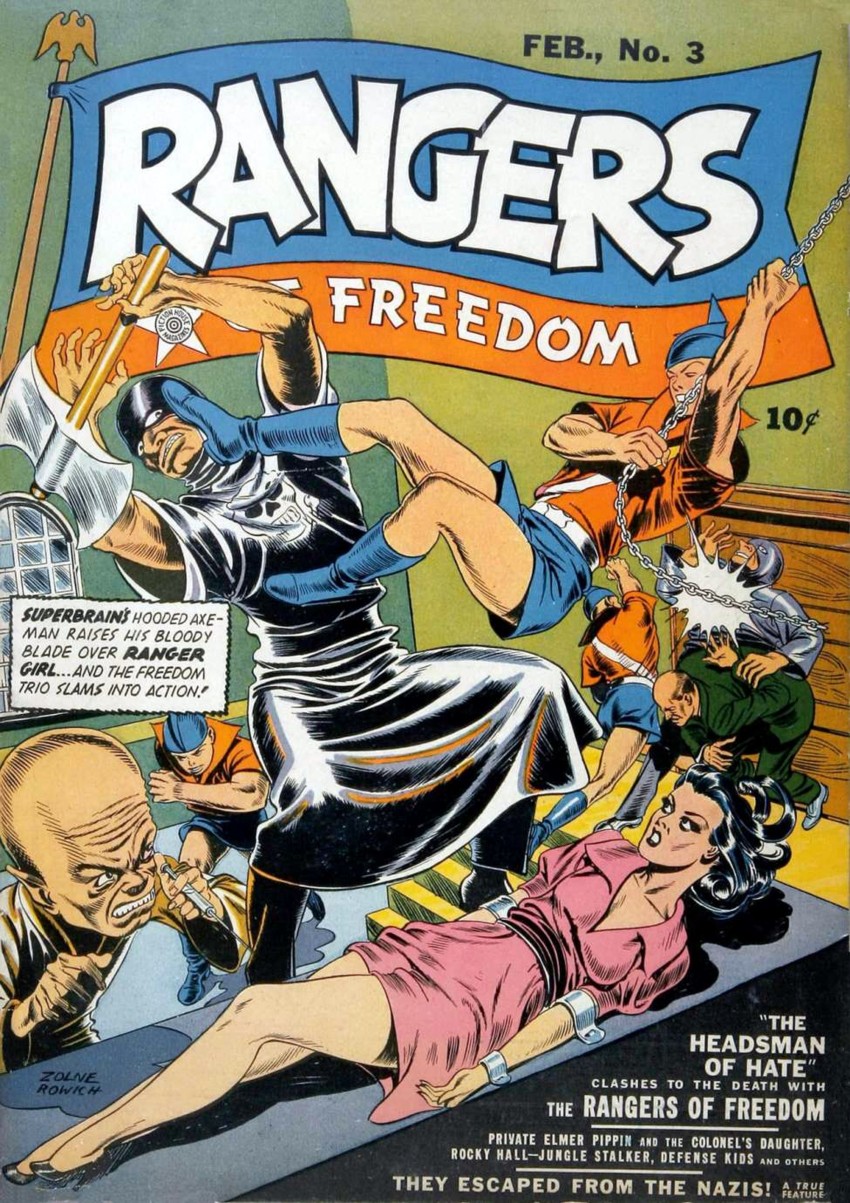 I stand (or rather sit, since I'm at my keyboard) before my multitudes of readers, and I am ashamed. Yes, multitudes of readers, it has been almost two years since I showed you the last installment of the short saga of the Rangers of Freedom and their battles against their chief enemy, Superbrain. I can only try to atone by giving you, here and now, part 3, from Rangers of Freedom #3 (1940).

Not only is it another chapter in the ongoing war between Superbrain and teenagers in fancy outfits with shark fins on their heads, but it also includes their pal, Gloria, who is now Ranger Girl. A huge huzzah for Gloria!

A couple of years ago I showed a story that included U.S. soldiers with the old-fashioned helmets. A reader asked "why the Tommy helmets" (meaning British — but known in America as the M1917 helmet). That is because the American armed forces did not adopt the familiar M1 steel pot helmet until 1941. It was worn for 40 years until replaced in the ‘80s. I can testify the M1 is heavy...I was in the U.S. Army during the 1960s.

The terrific artwork is by Joe Doolin. The cover is by Dan Zolnerowich. 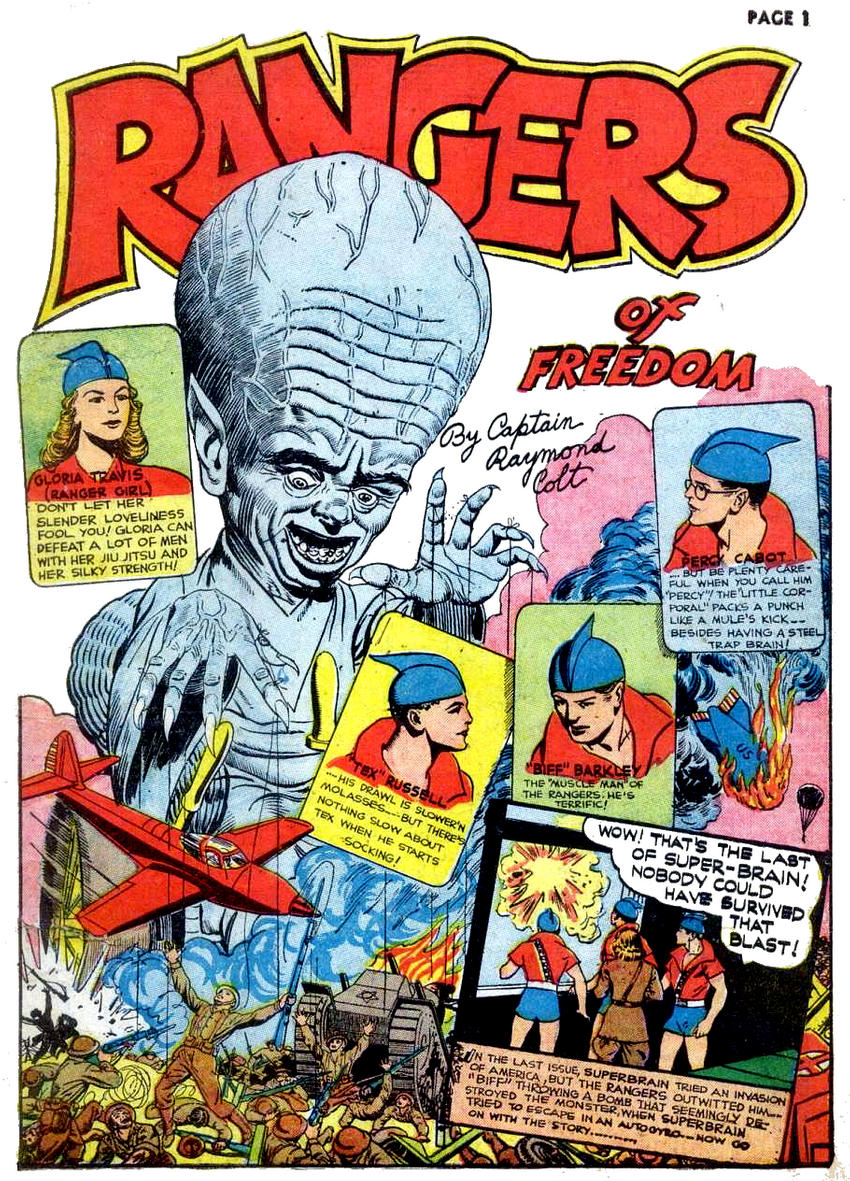 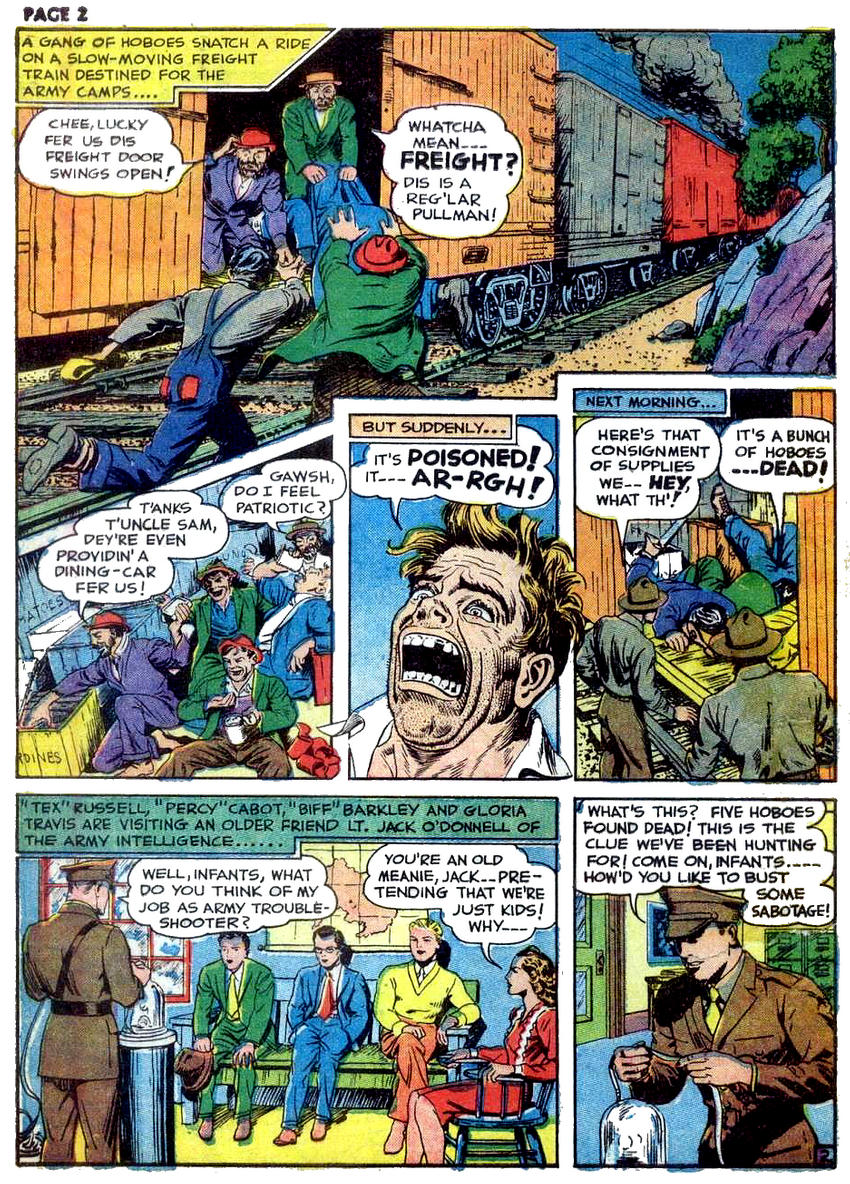 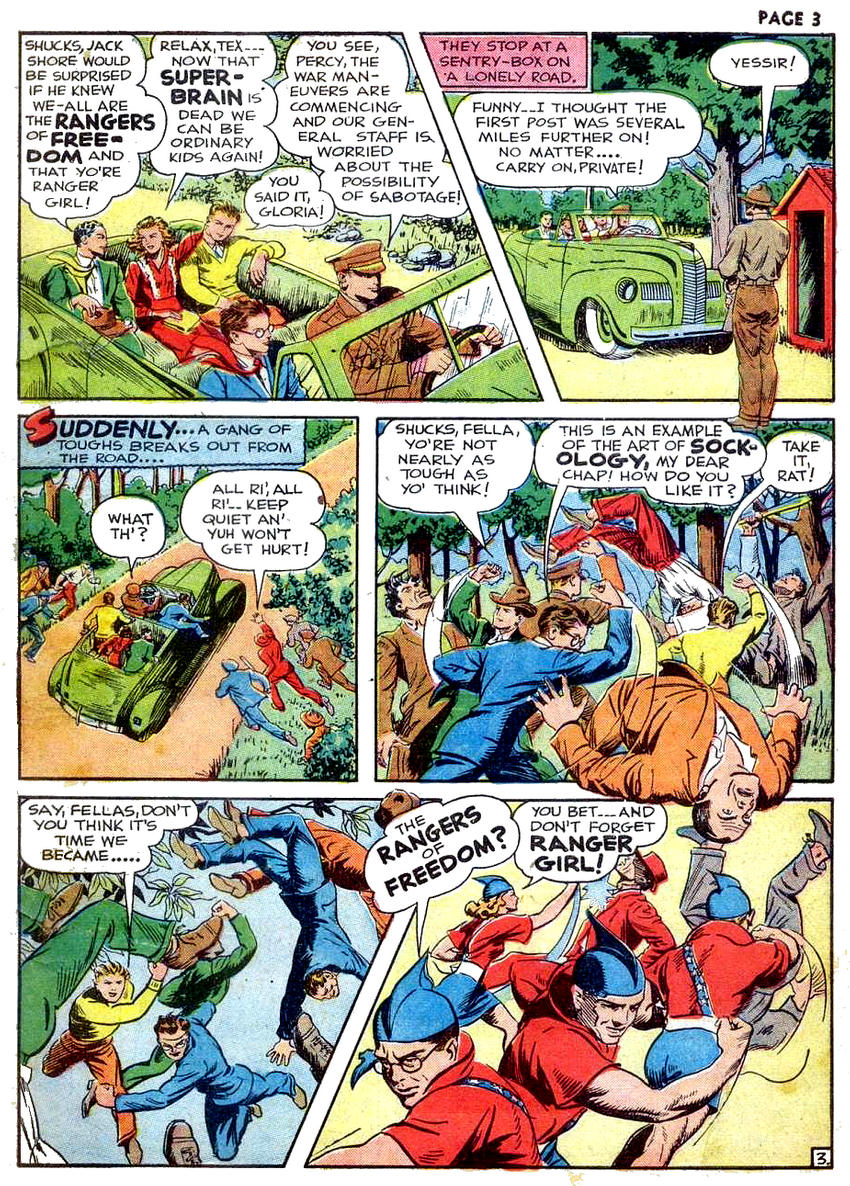 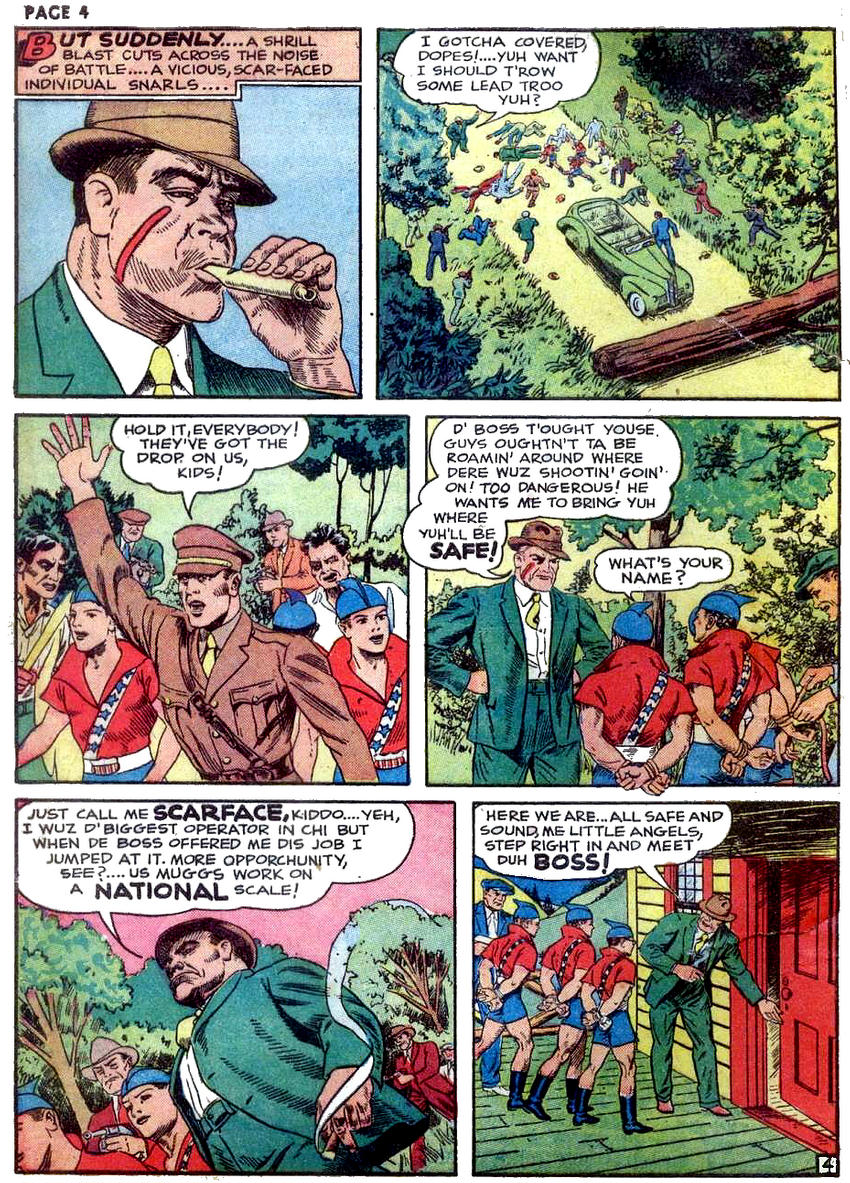 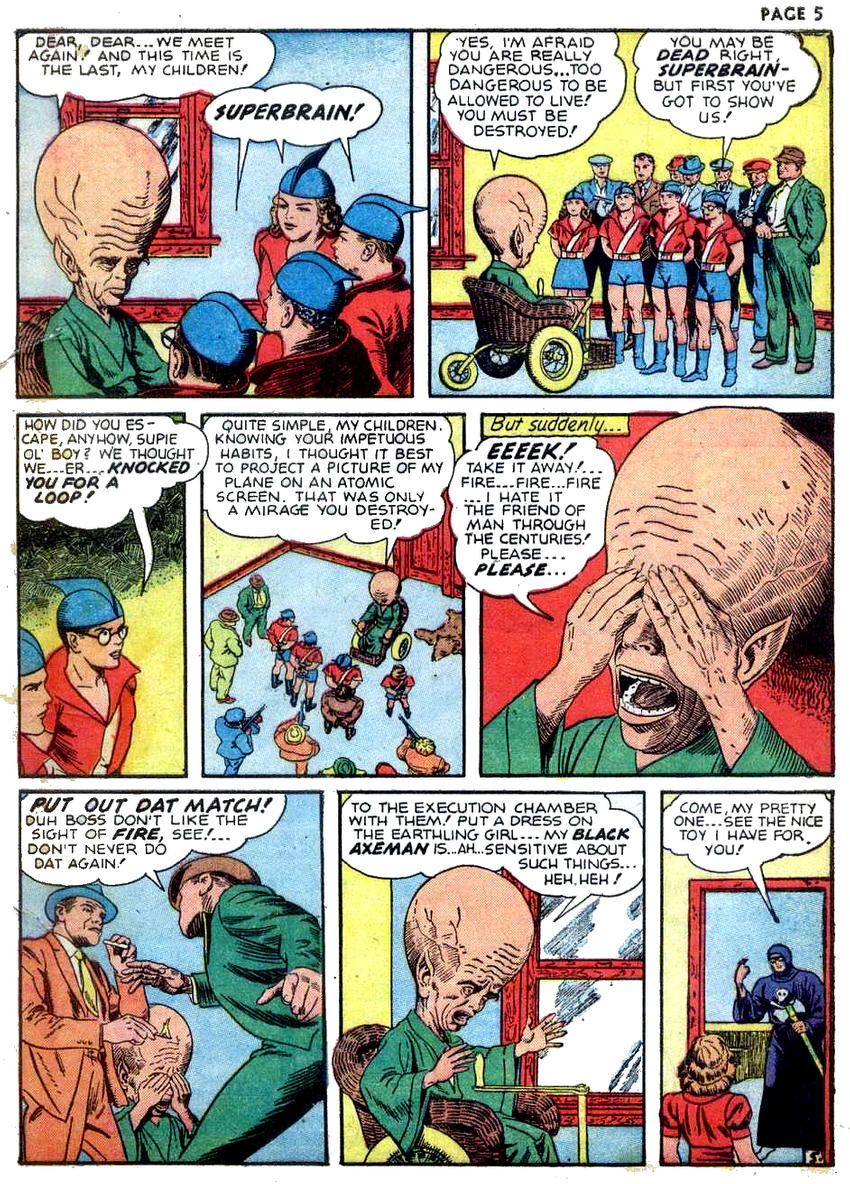 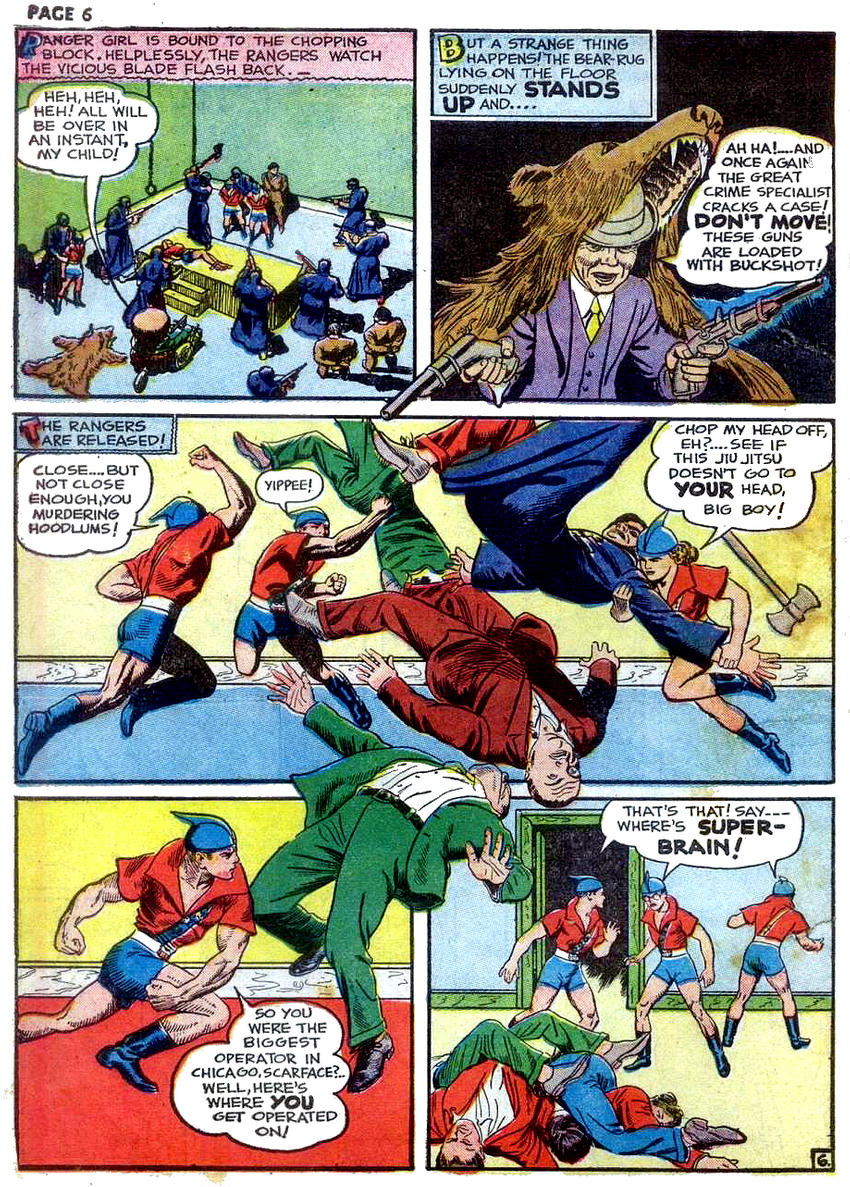 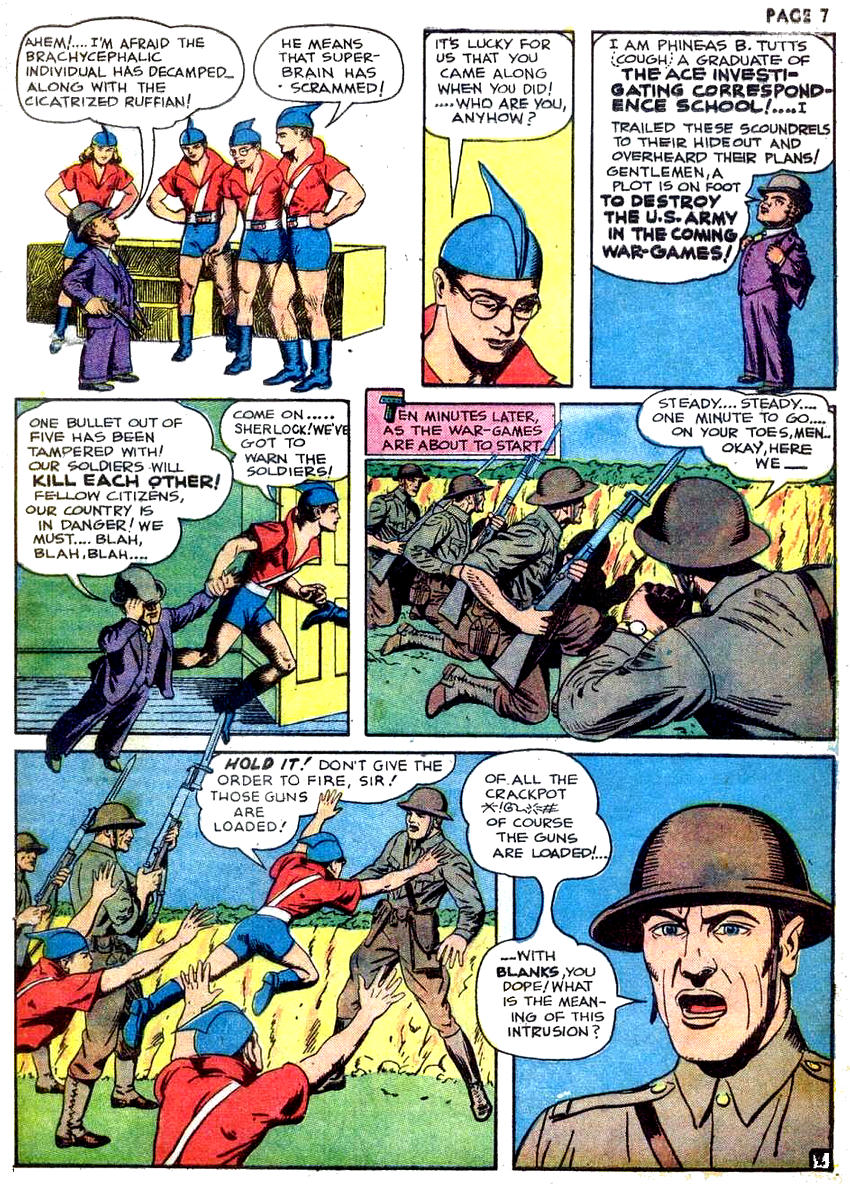 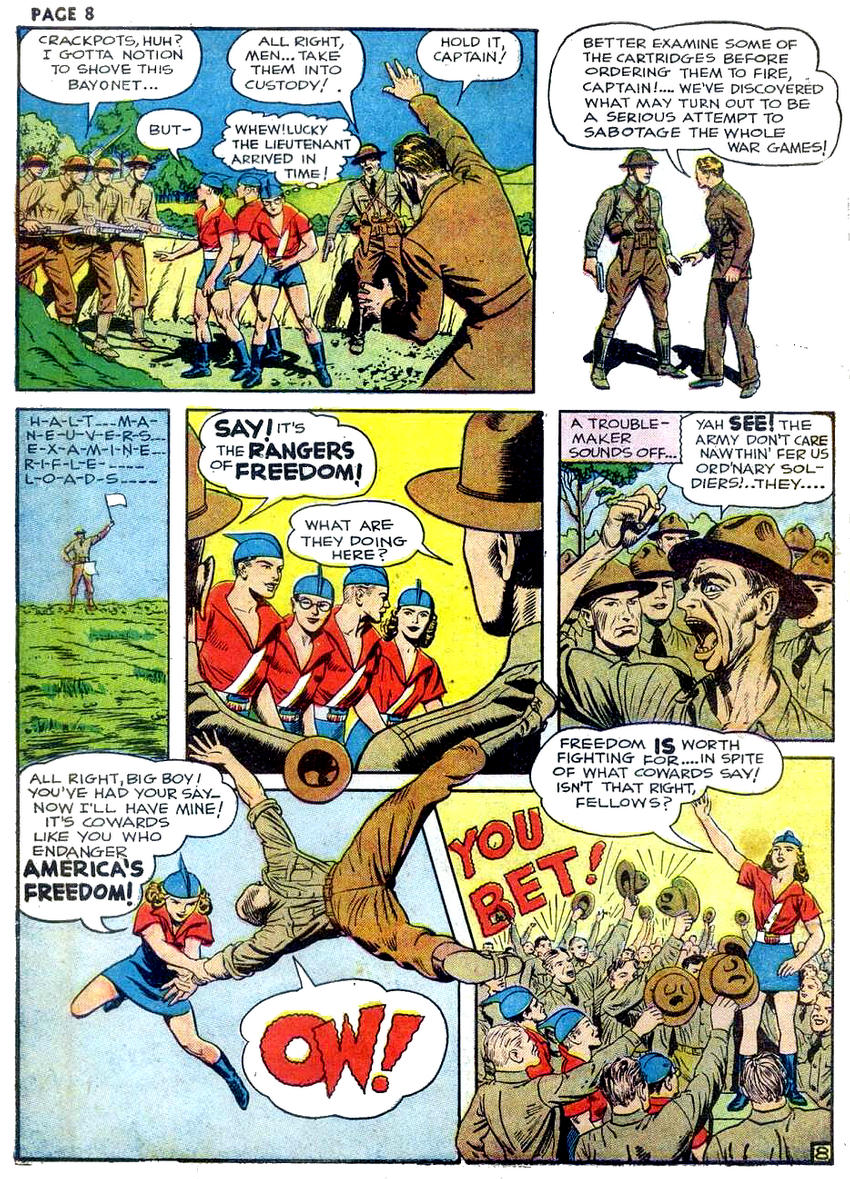 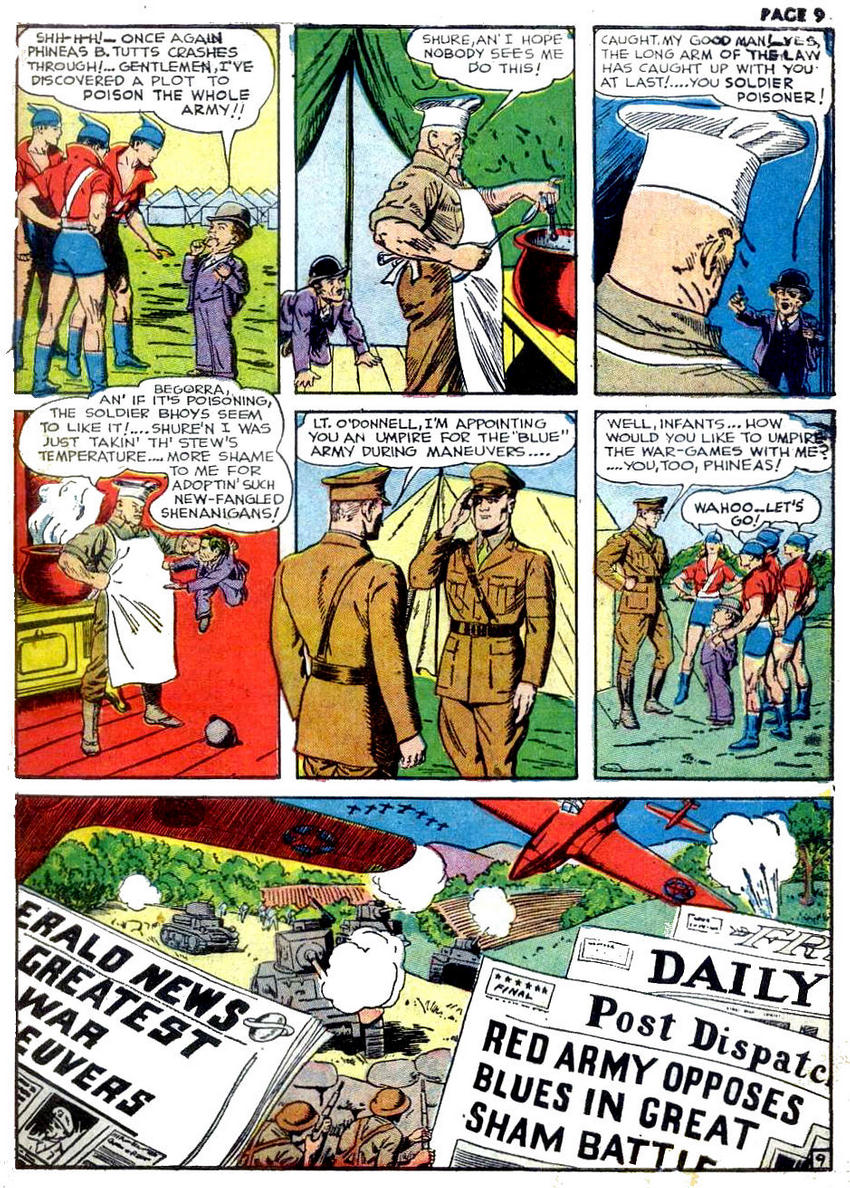 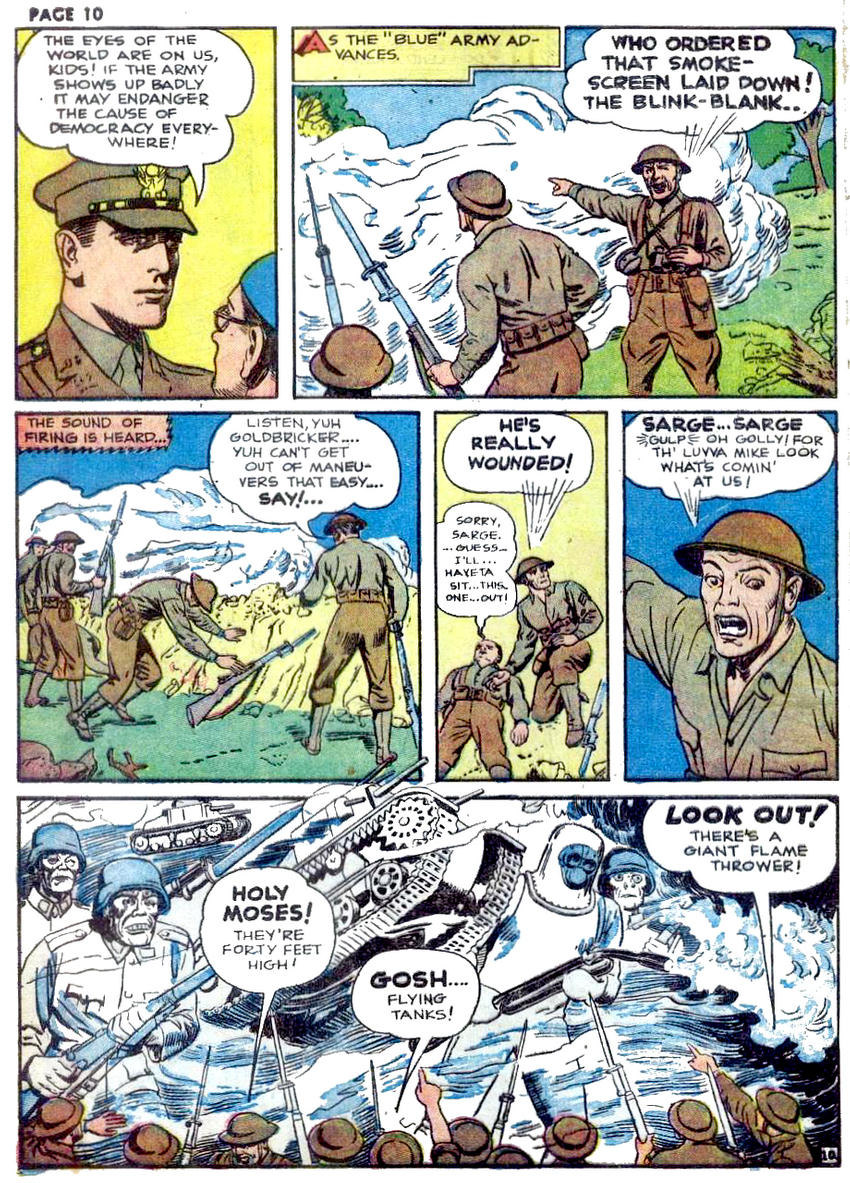 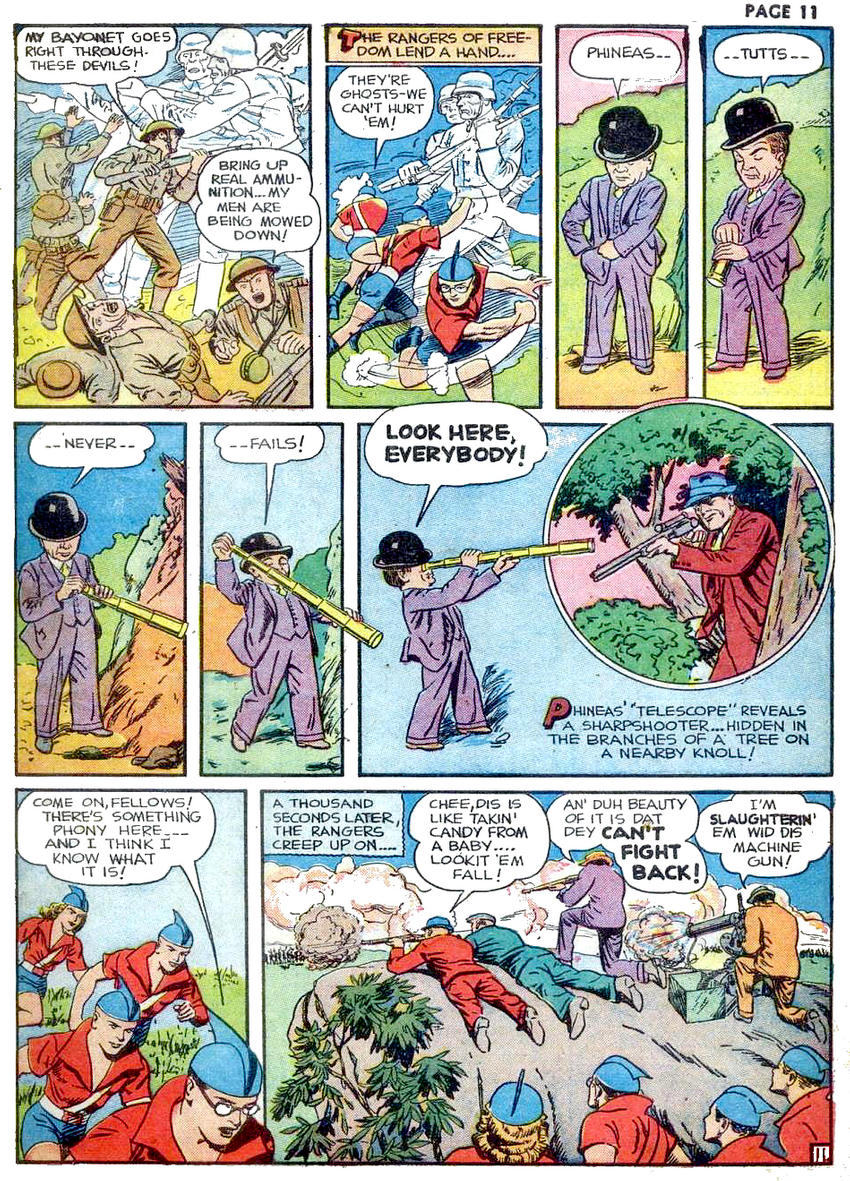 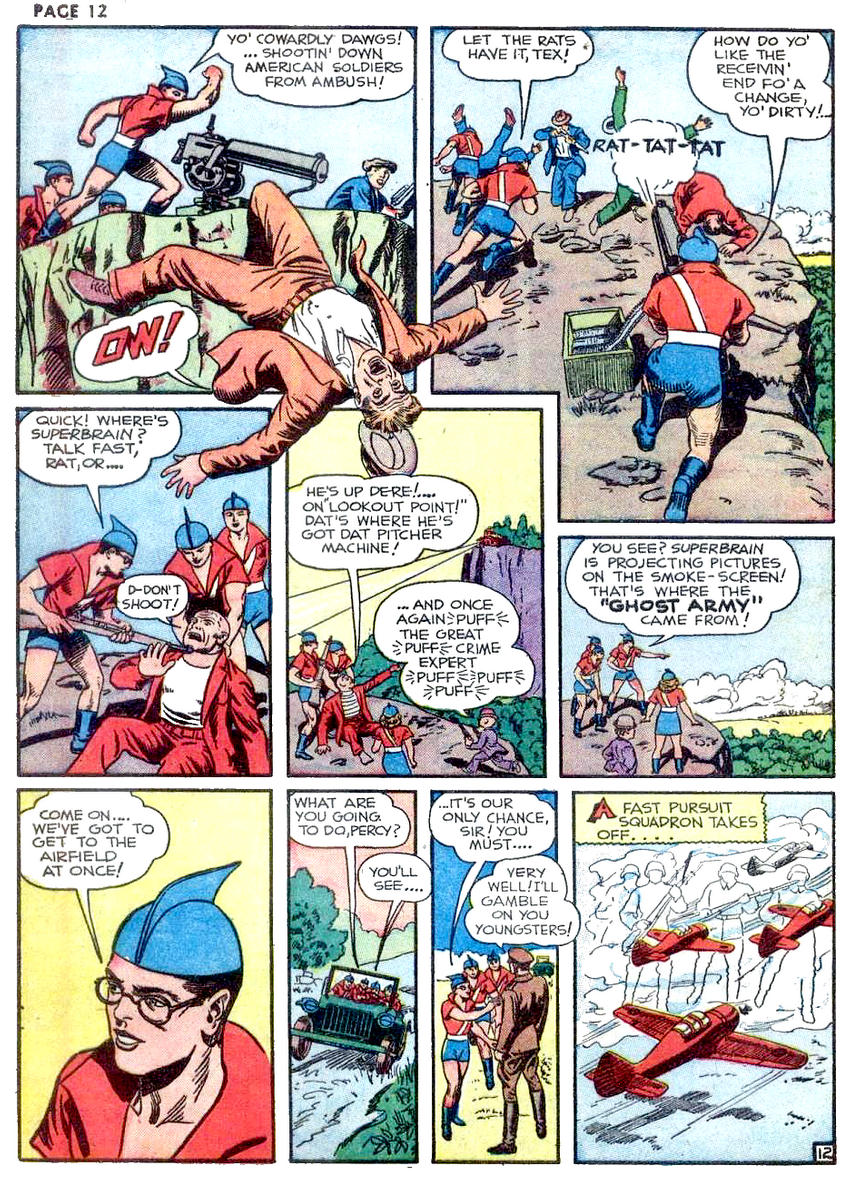 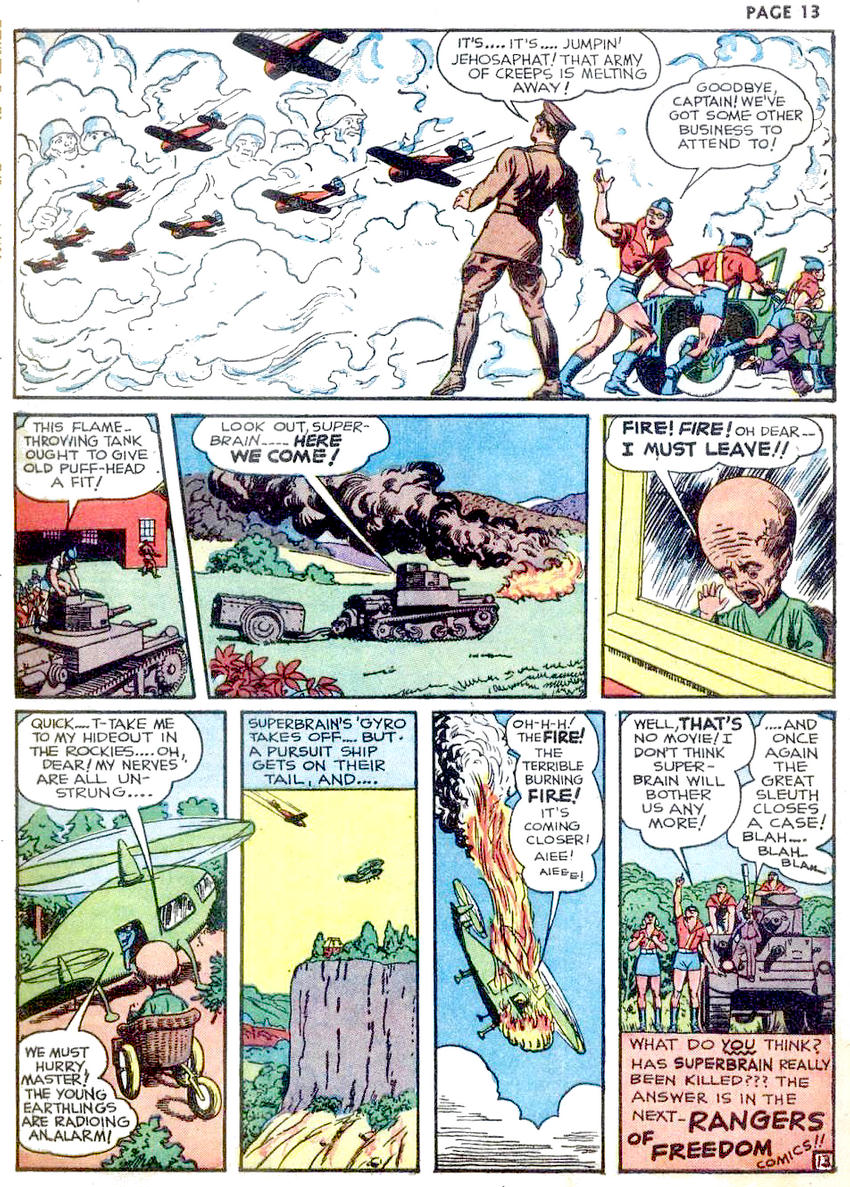 Read the first two chapters by clicking on the thumbnails: 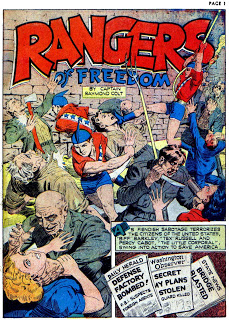 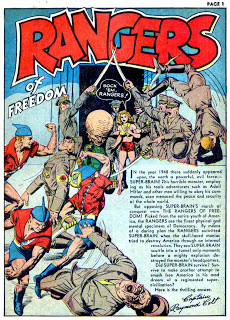 Superbrain (a.k.a. “Super-Brain”) supposedly died yet again in the next issue. He appeared on the cover of the issue beyond that, but apparently a decision was made to reboot the Rangers, and they and Superbrain didn't appear within.

I cannot say that I ever cared for the business of inevitably finding that a villain who seemed to have died in his previous appearance was, after all, still alive — especially as it implied that there were relatively little disincentive for him again to cause terrible damage and suffering. But at least Stan Lee didn't usually bring the Red Skull back in the very next issue.

And here, readers, Daniel chides me (gently) over the spelling of Super-Brain, which I have mistakenly spelled Superbrain.

Oh, the ignominy! Yes, Daniel is correct, and now not only have I failed my readers by being dilatory in showing part three of the Rangers/Super-Brain series, but I face the disgrace of having to be corrected on my spelling. It has been a lot of years since I was a perennial spelling bee winner in school, but then we were never asked to spell Super-Brain.

I didn't mean to be read as chiding you! The spelling changed across stories!

Daniel, I was having fun with you. You have corrected me in the past and I appreciate that you take the time to help me change something that is embarrassing.

I get my posts ready at least two months before they appear. I try to re-read and edit them before they make their online appearance, but I sometimes miss the little mistakes, and I am glad someone is paying attention.