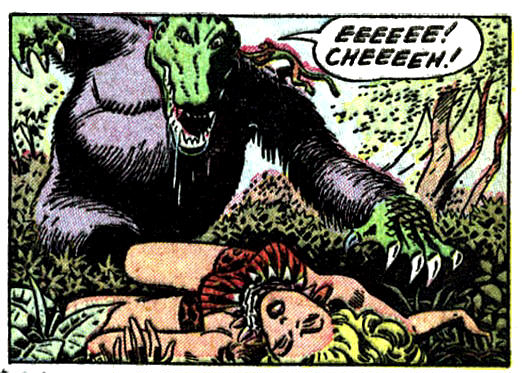 Lorna, tall, strong, blonde, buxom, rules her little corner of the jungle. That corner is the scene of a lot of jungle action, like this tale of a killer cross-species critter: half giant ape, half crocodile. (I don’t wish to destroy the fantasy for you, but can you imagine that thing’s parents mating? Ugh.)

Lorna has a guy, Greg, whom she likes, but who criticizes her constantly for being a “girl” out of her place (which would probably be in Greg’s jungle apartment fixing him a cocktail and his dinner of broiled zebra haunch ready and on the table when he gets home from a hard day of being a great white hunter). I say Lorna, you’re better than that. Forget this guy. He’ll just bring you down.

Finally, you’d think such a creature as a crocodile/ape would be ripe for capture by zoologists, for the purposes of study. But not in comic books where the order of the day is KILL. 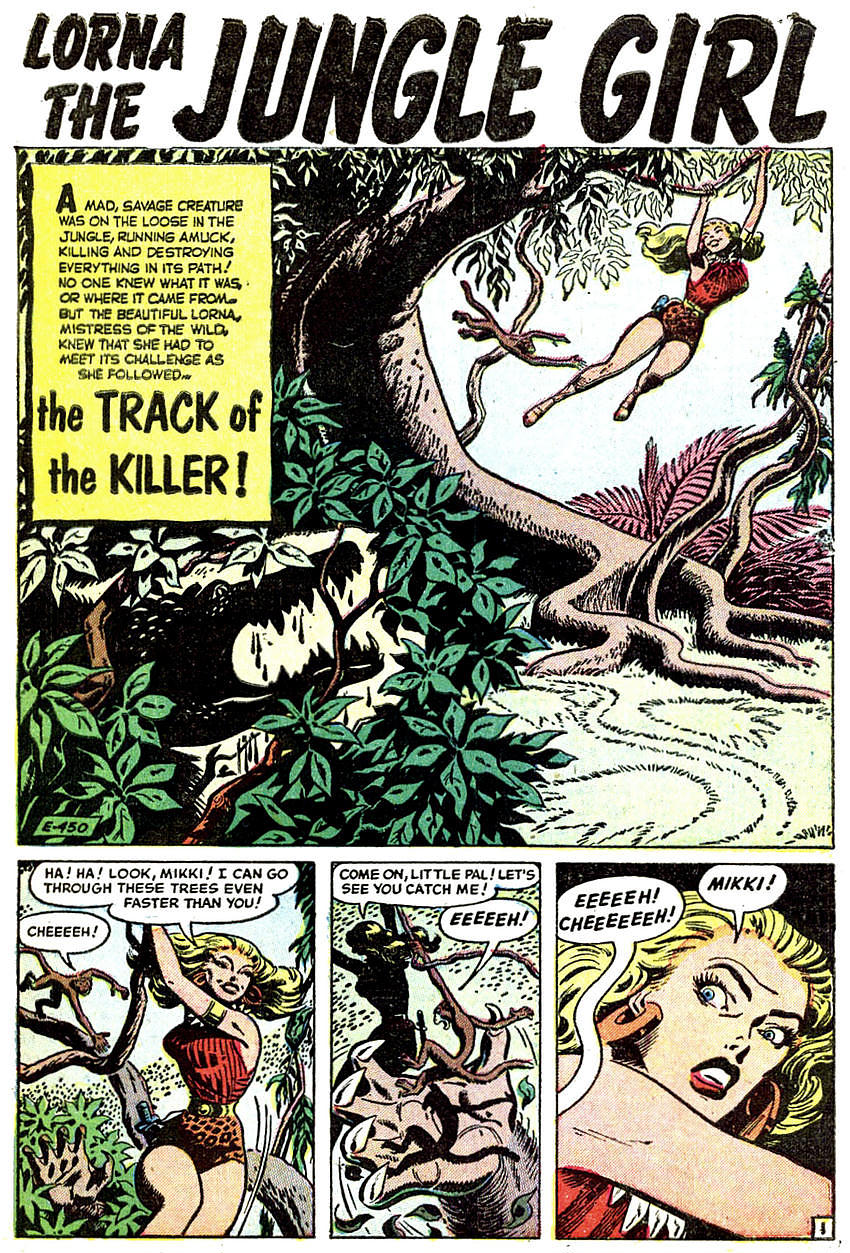 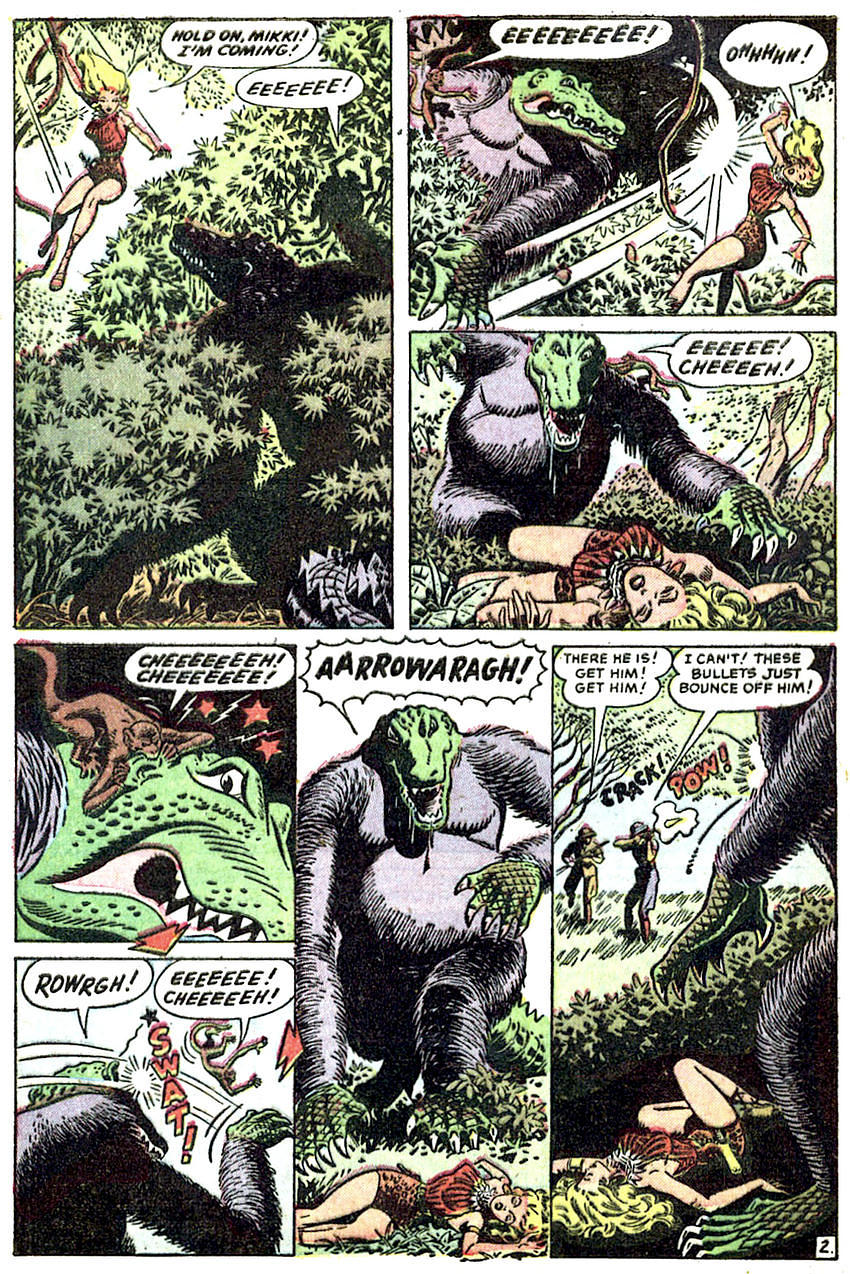 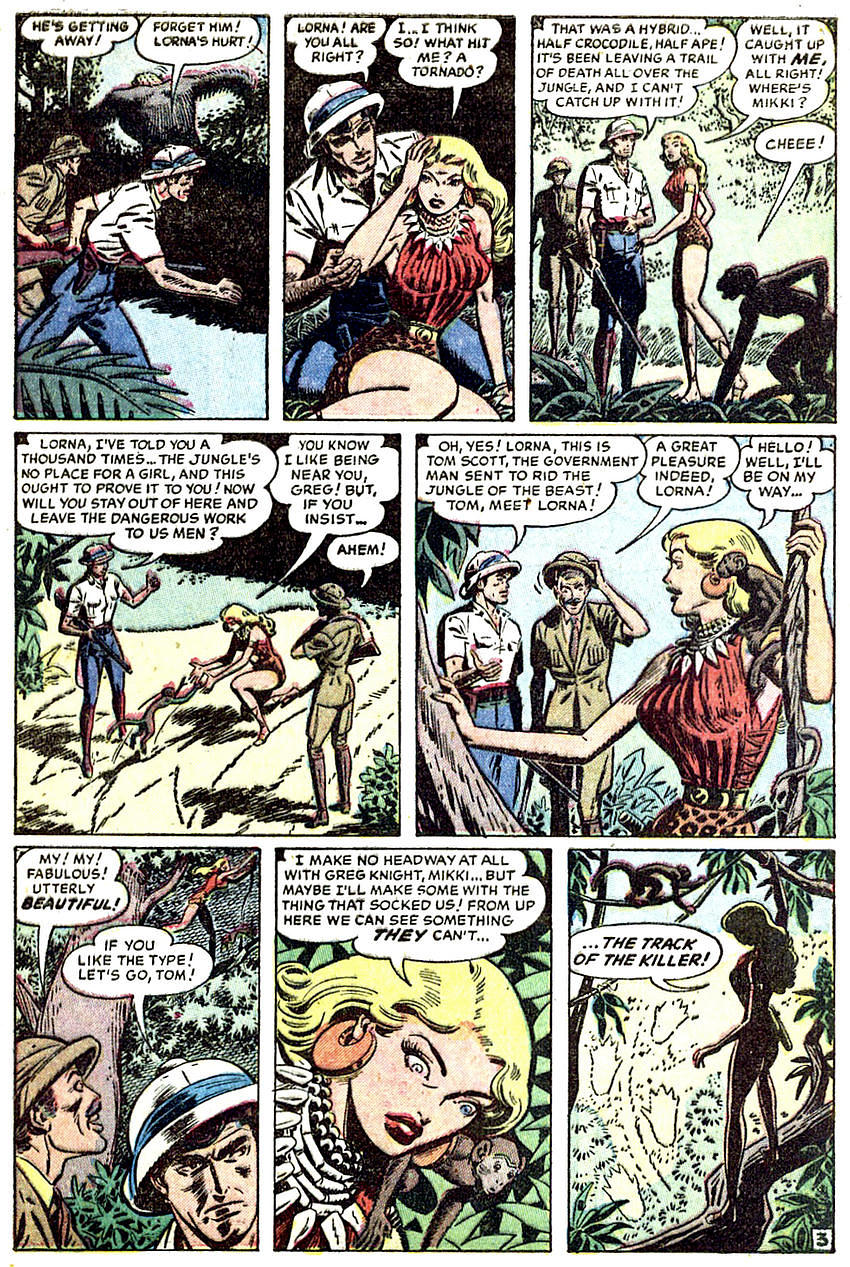 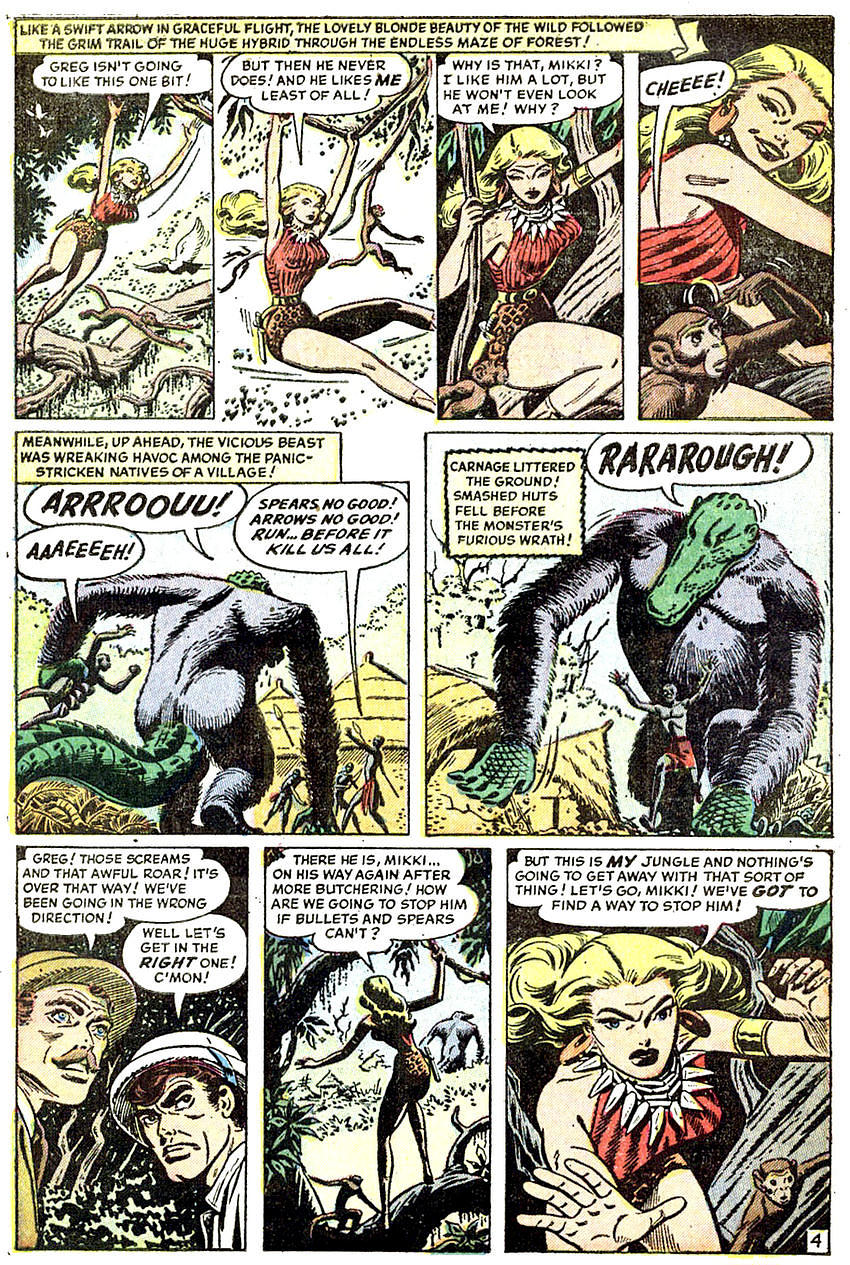 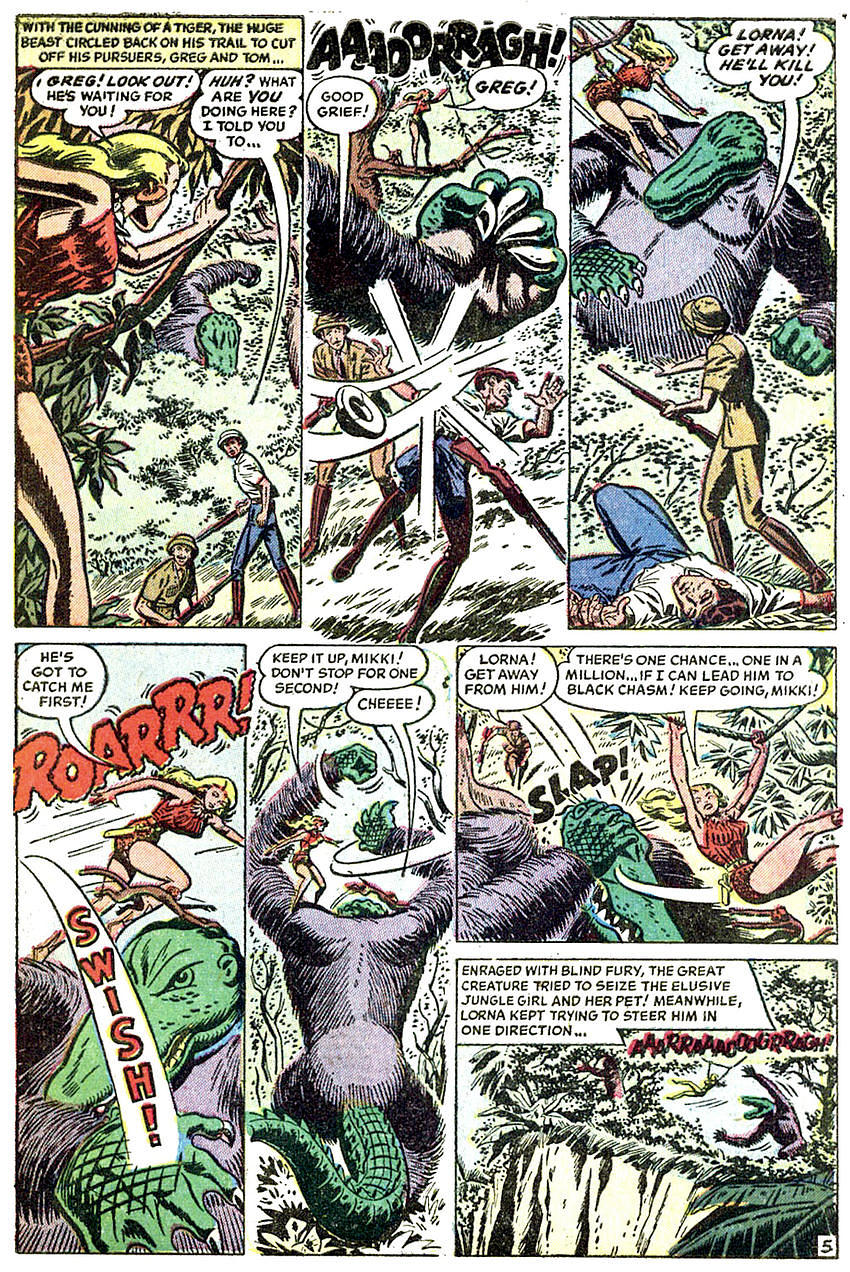 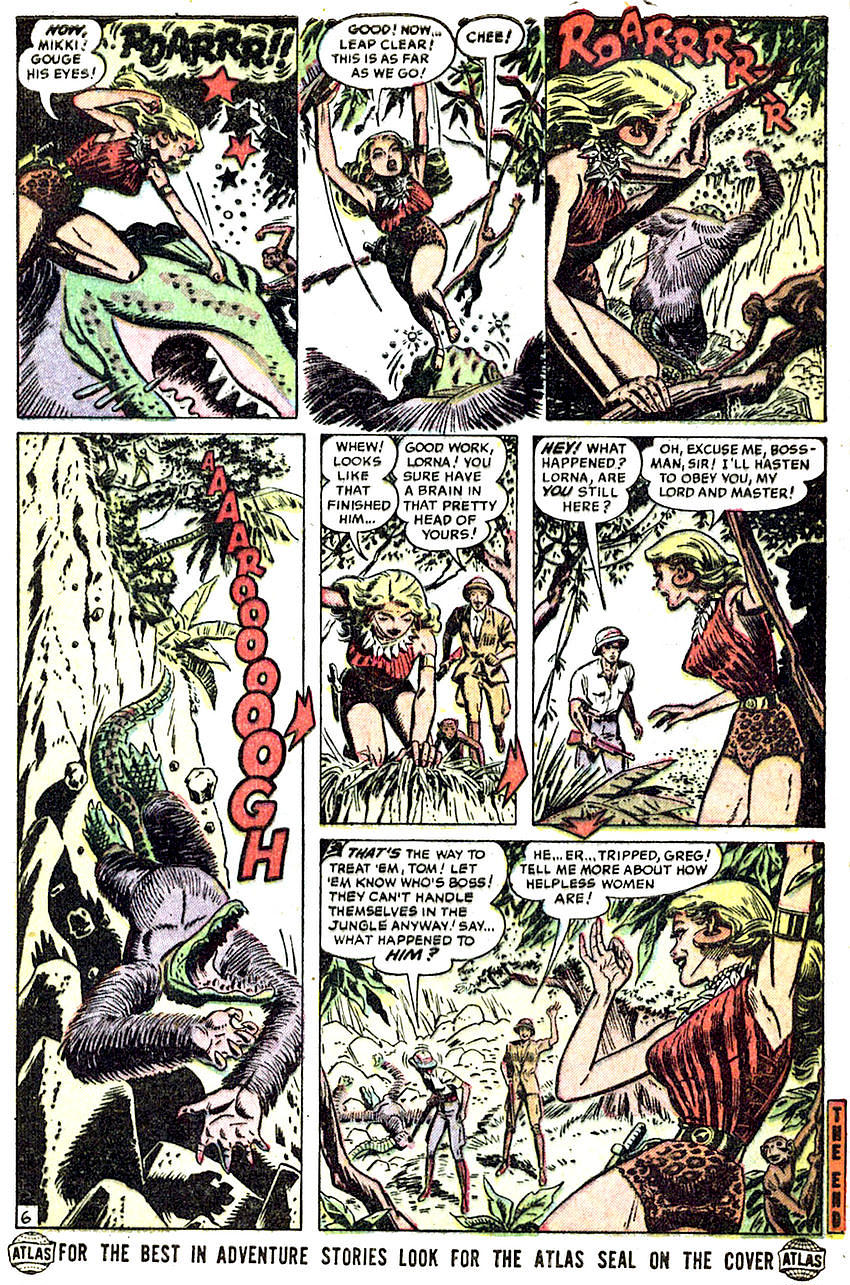 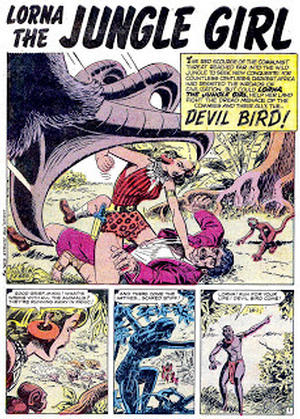 I have never gotten where they were going with Greg in this series. It's way to early to be a gay character, as if you wrote one back then for sure he'd be insultingly cartoonishly effeminate.

But it's hard to get what else it could be. Lorna constantly wonders why he doesn't "like her", and even if he was being played as an arrogant dude who dismisses women, they also treat women as objects, and he's doing none of that.

Both of those options would be a bit much for 54 in a kid's comic.

He just seems to be a dick for absolutely no reason I can ascertain! Is it all for the joke? Why the inner monologue if so? I don't care if he's knocked out every time, everybody else knows how tough Lorna is, he sees her swinging through the branches! It's insane!

Hi Pappy,
I don't think you have to worry about the creature's parentage. It looks like the result of some surgery by a Dr. Moreau-type vivisectionist. Perhaps it was someone like Dr. Mark Sinclair (see the 1959 film "Alligator People")?
Hope this helps!

Brian, I think Greg was written as an attempt to have a gimmick. Maybe the creator(s) of Lorna decided that the feature's token white male would not be like Bob in the Sheena strips, who always seemed kind of docile to me. Greg was a macho guy, and he wanted to remind everyone, especially Lorna, that he was still da man!

The Lorna strip reflected some of the social trends of its time, too. Men earned the living, women stayed home, raised the kids and took care of the house. It was the way of my parents, but not my own marriage.

Darci, awww...you took the fun out of it for me.

Man, I am with you on Greg. I thought for a bit that they might be trying an early atypical gay character, but I think that he is just a dick. And dumb as a box of rocks to boot.

Good to see that the injury to eye motif was still active in comics in 1954, even if the eye belongs to a croco-ape.

I agree with Pappy. Greg was meant to be hetero, but he was clearly insecure in his masculinity and couldn't get away from the idea that women ought to be protected. The idea that Lorna can protect herself irritates him, because it obviates her need for a savior. Over time it seems like Lorna gets a fair amount of amusement out of the situation, for what that's worth.

My sis Deb wants 2 D8 this croc-o-rilla yo. Or ape-o-g8or or watevar his name is. Can u pls giv him tha link 2 her new cartune co-staring Bigfoot? http://ow.ly/BM60W <<Than he can Dside if he thinx shes as pritty as tha jungle girl yo! OMG Pappy lets hope 4 a like LUV CONNECTION♥ xoxoxoxoxo