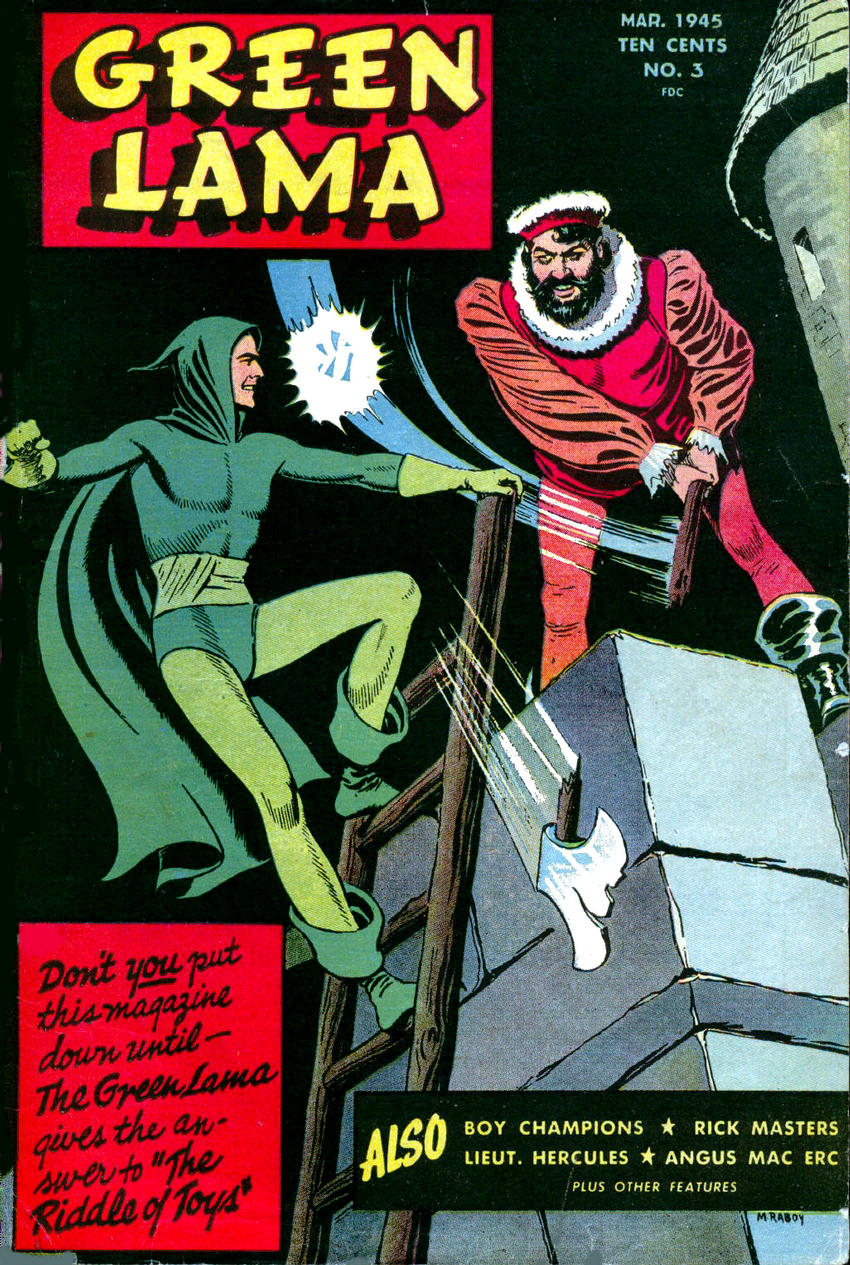 We conclude our theme week, Heroes in Green, with a tale of Green Lama.

Don Markstein’s Toonopedia entry for Green Lama ends with, “To a comic book aficionado, however, The Green Lama will always be Mac Raboy's lithe figure gliding gracefully through the air, dressed in a streamlined version of a Tibetan monk's outfit.” Toonopedia goes into detail on the career of Jethro Dumont, wealthy playboy (like other superheroes) who was trained in Tibet (again, like other superheroes). Each of the 1940s incarnations of Green Lama, pulp magazine, radio, appearances in Prize Comics, had relatively short runs. The comic book version published by Spark, a small publisher, is, as Markstein said, known for the artwork by Emmanuel “Mac” Raboy, who had a clean and uncluttered style, and whose artwork adds much to any feature he worked on.

I have a question about this story. Why is Mr. Jerome, in Jerome Toys, serving drinks in his toy store? Is that a soda fountain or a bar we see? 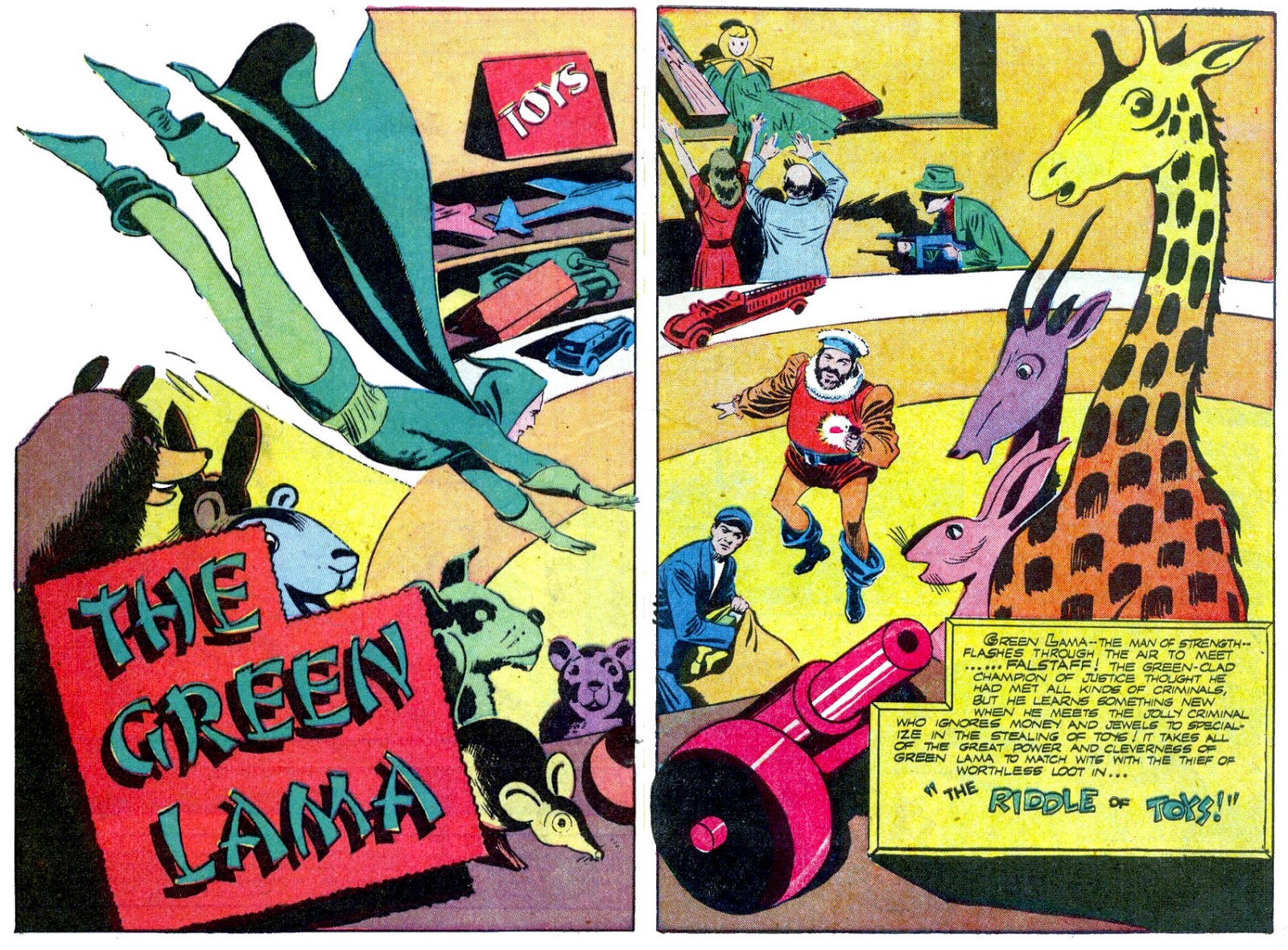 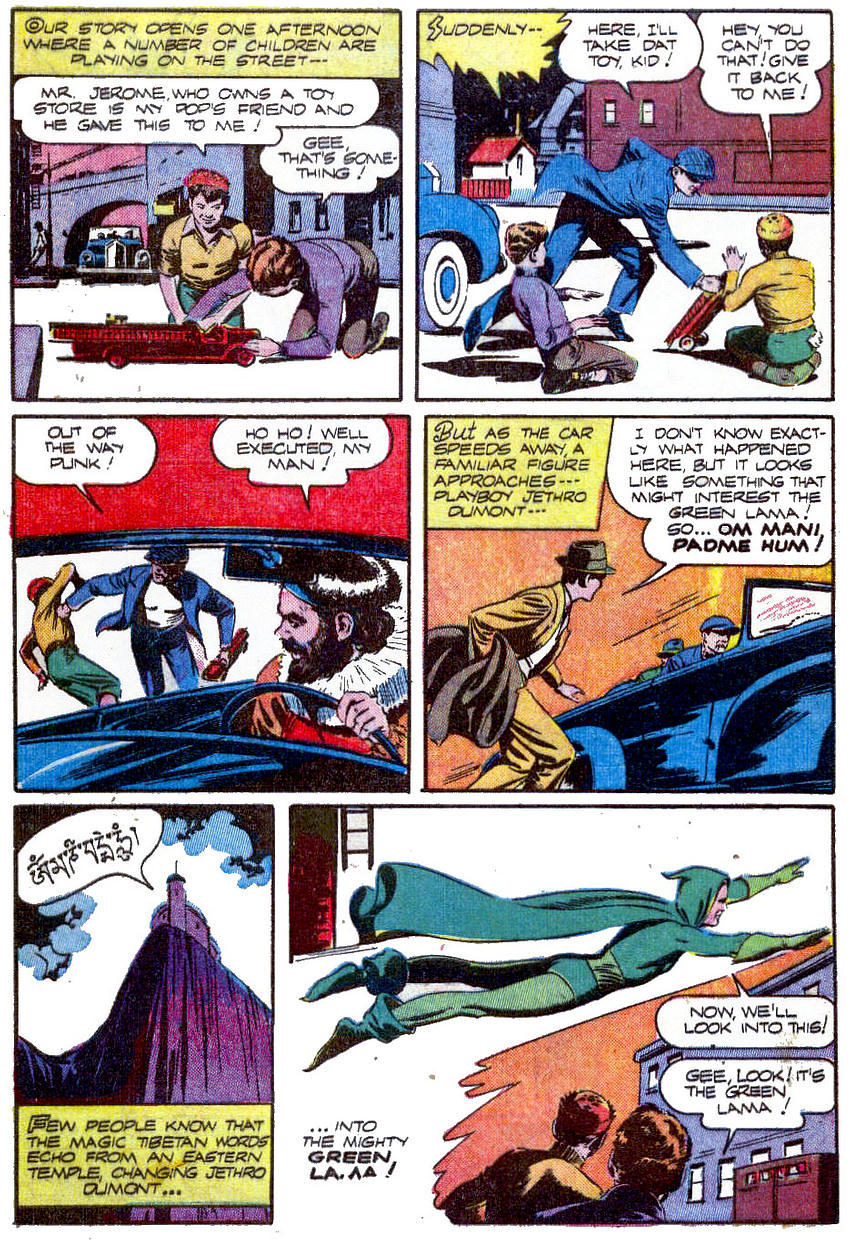 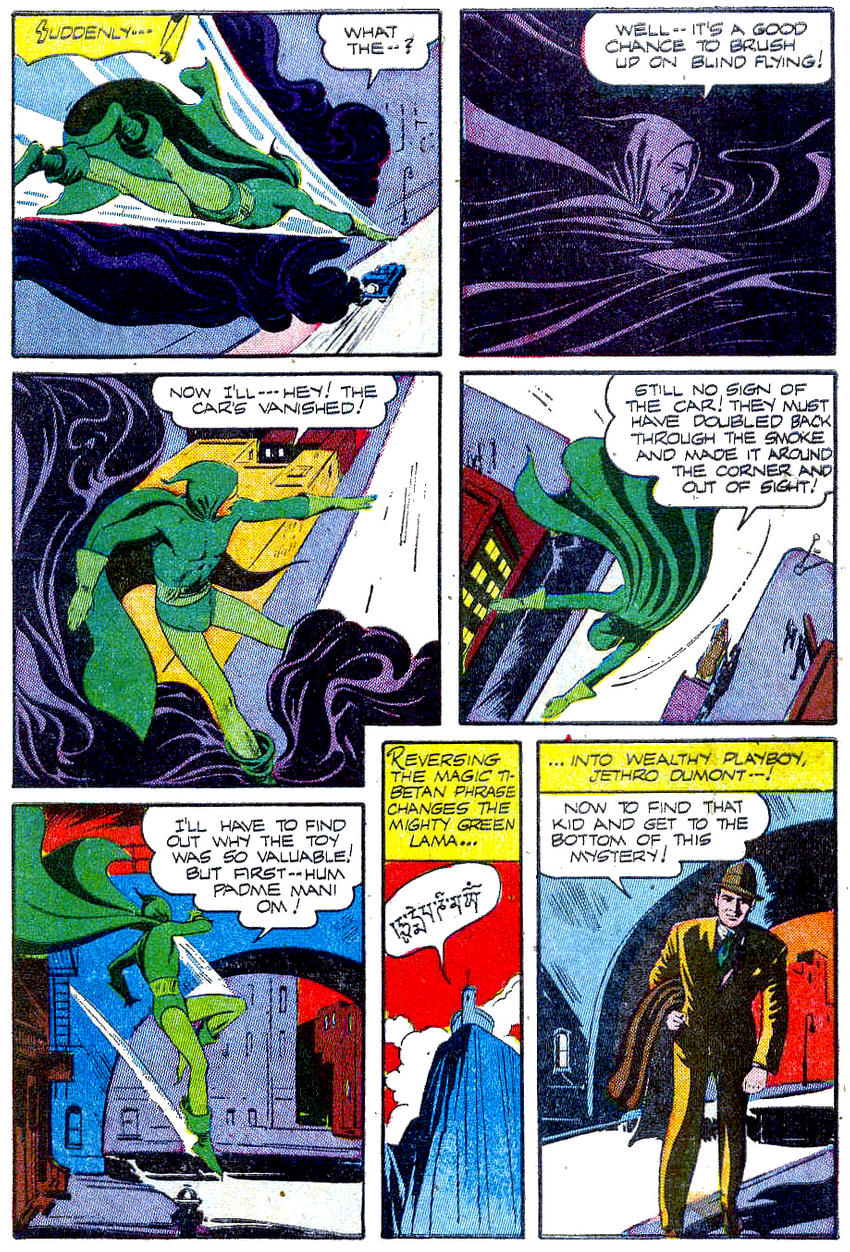 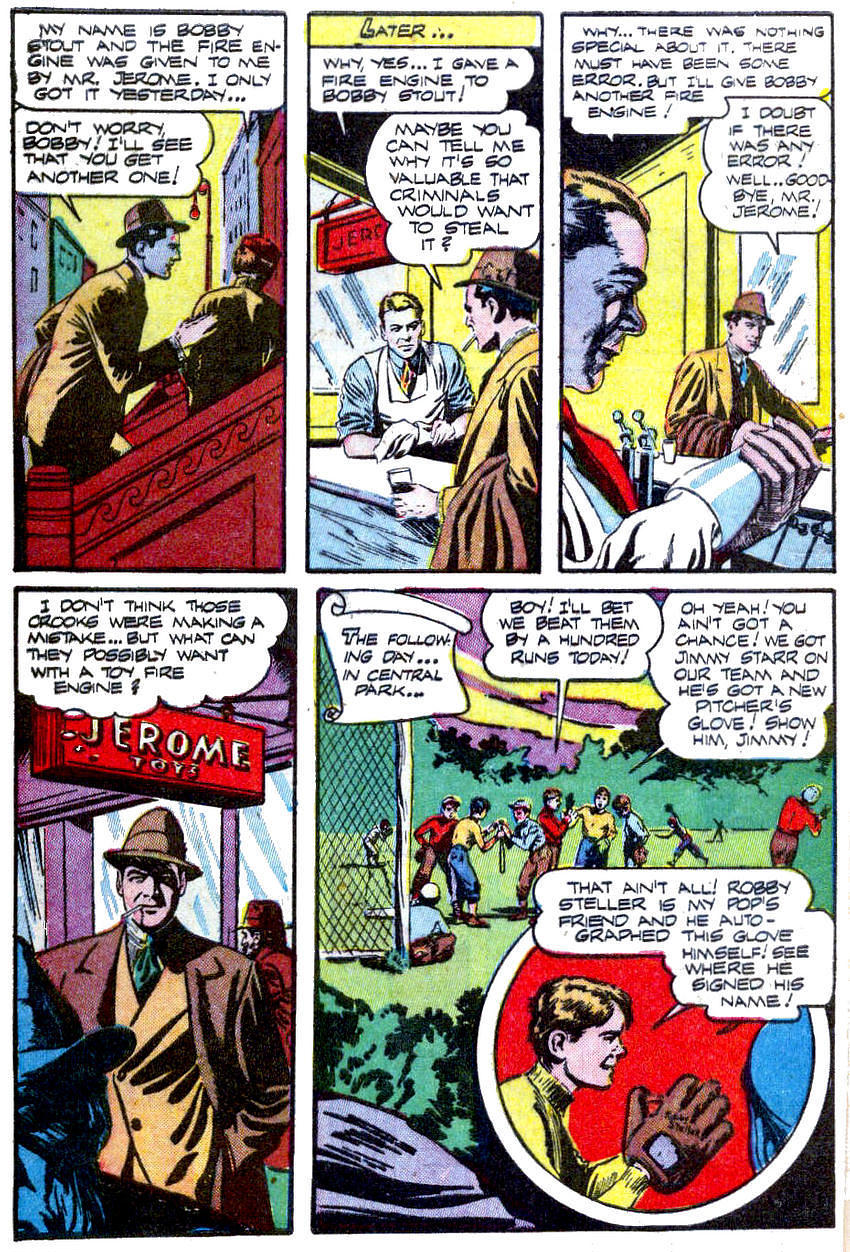 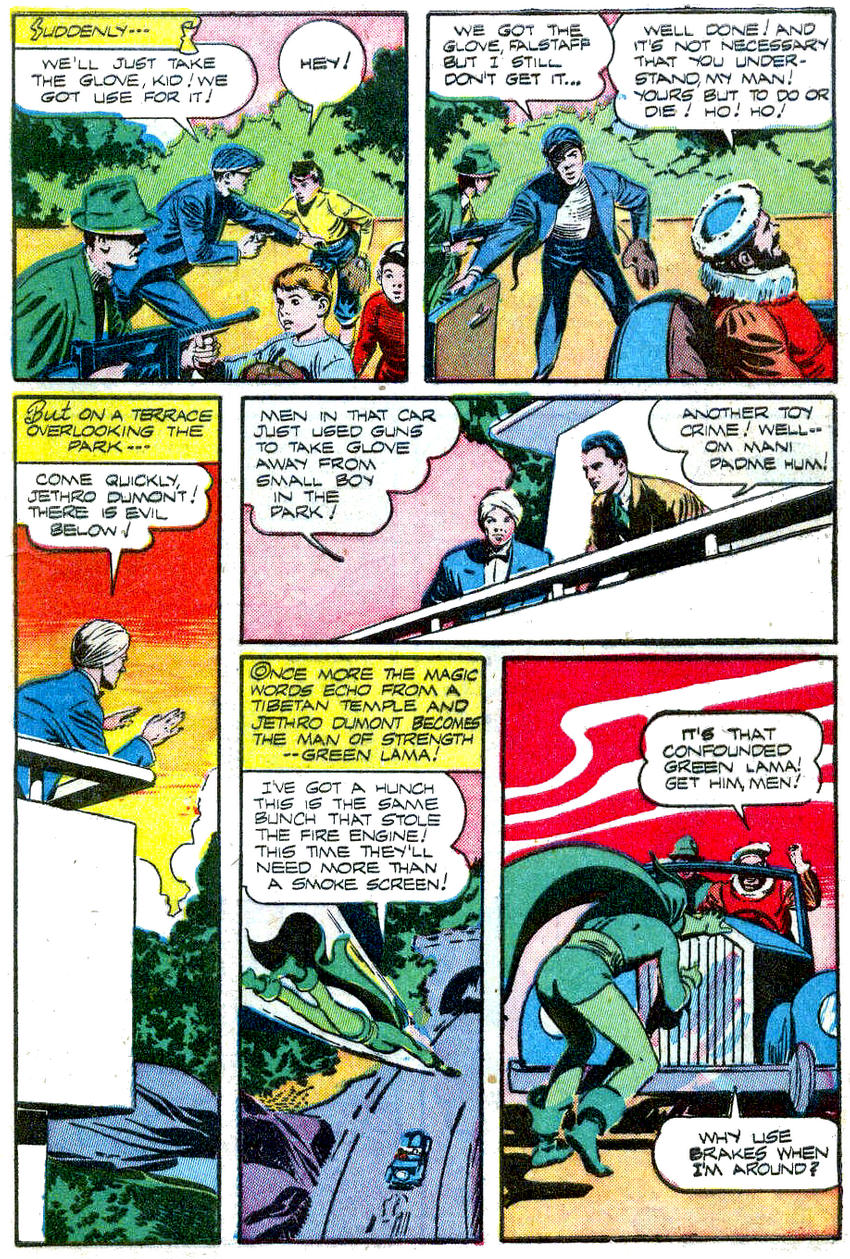 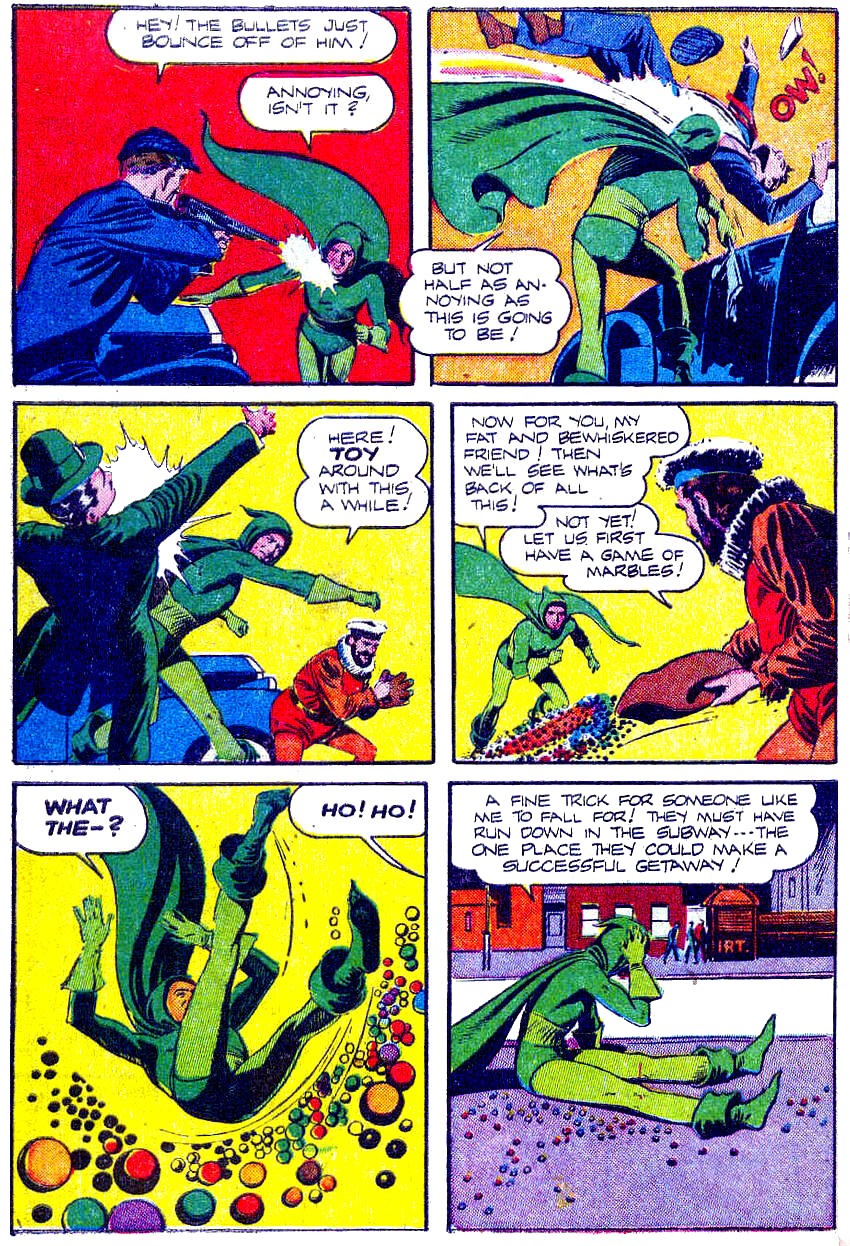 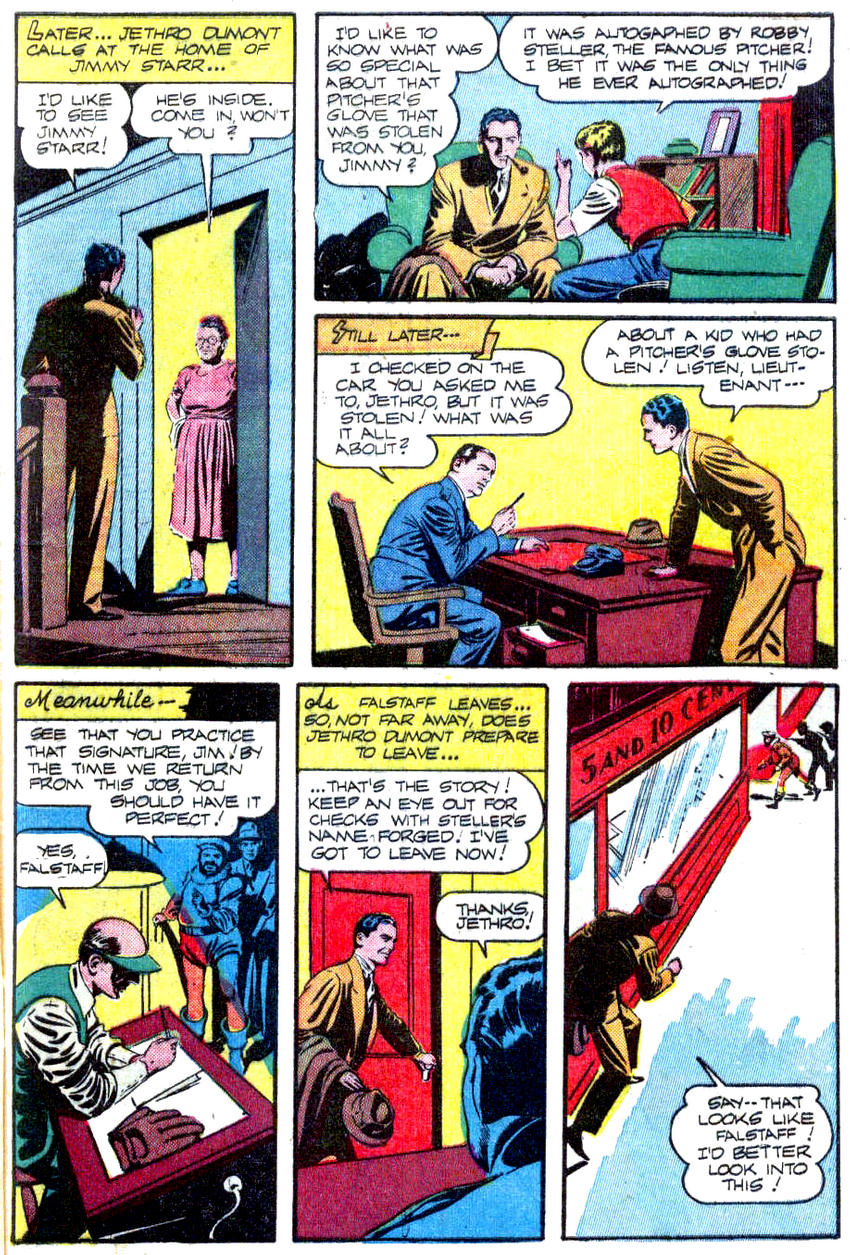 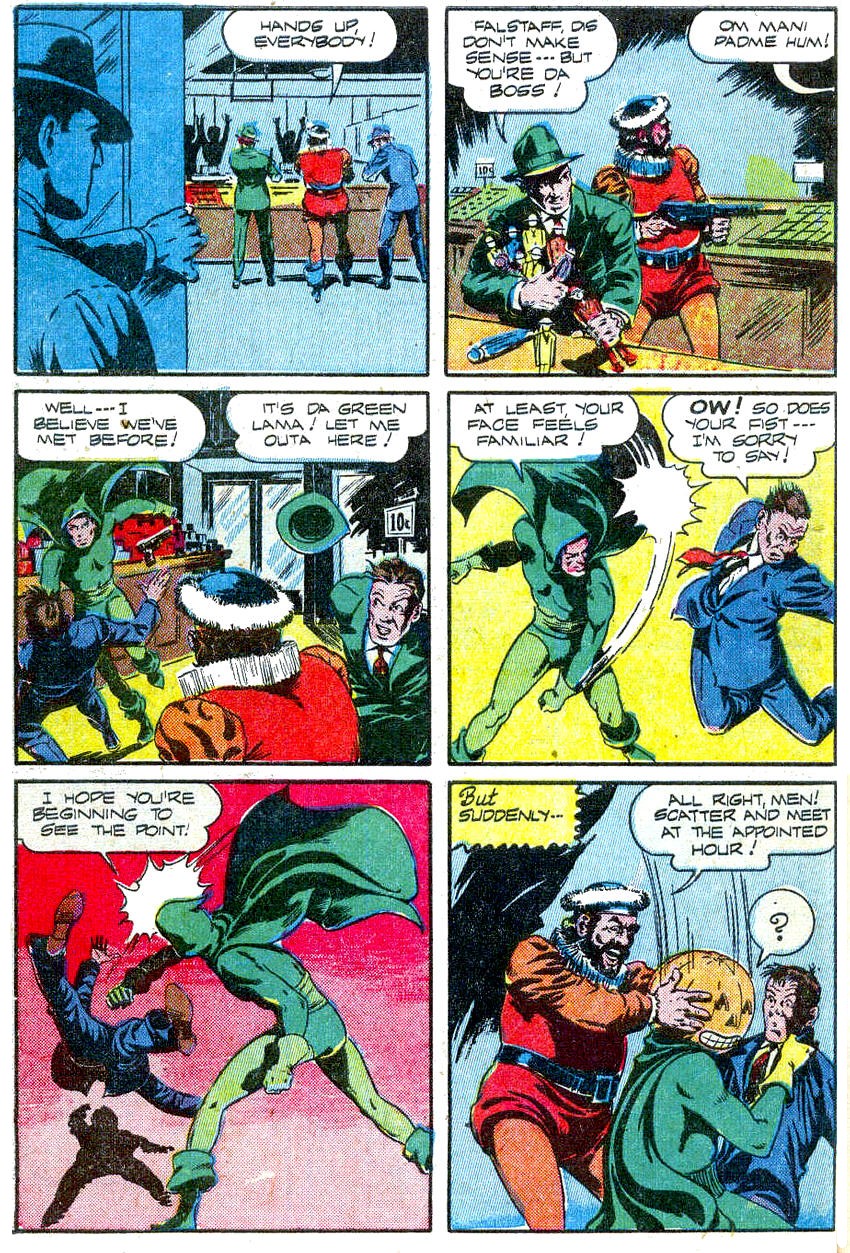 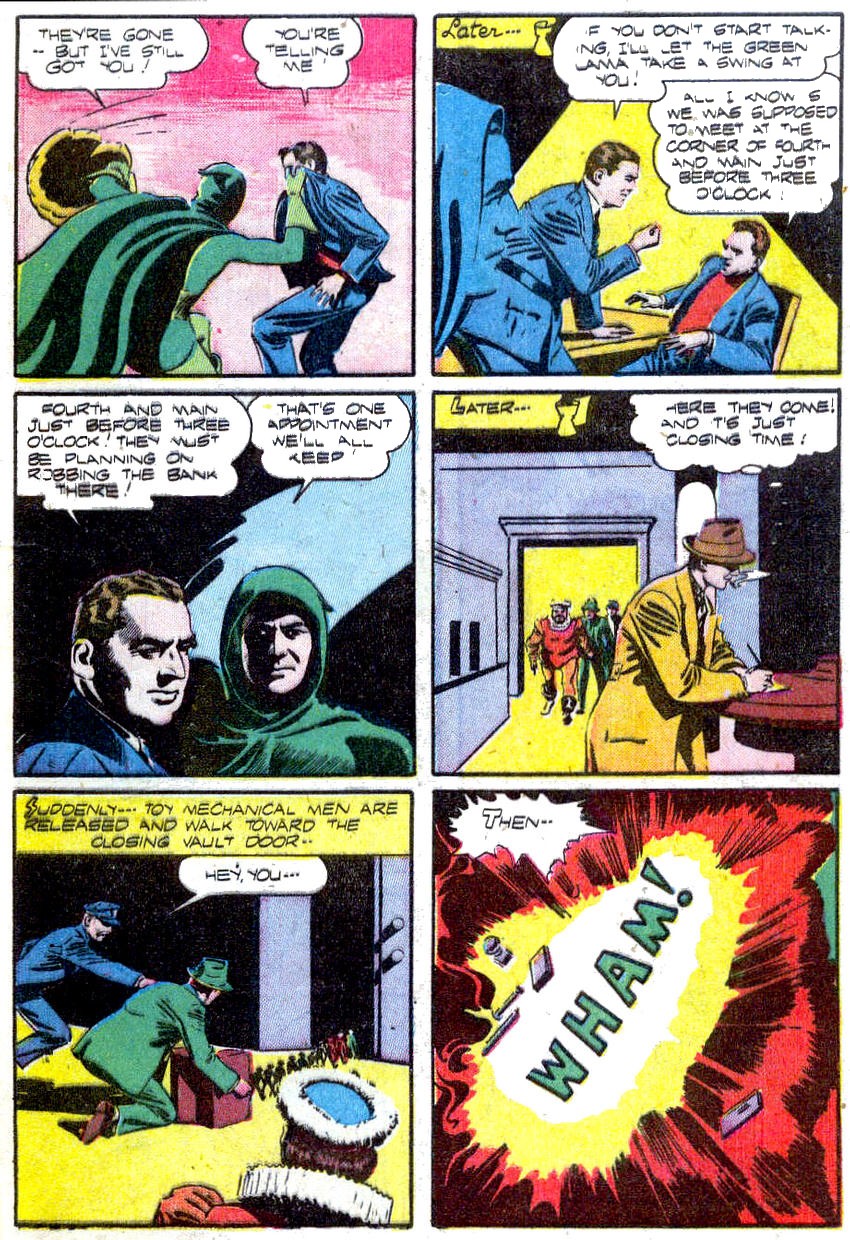 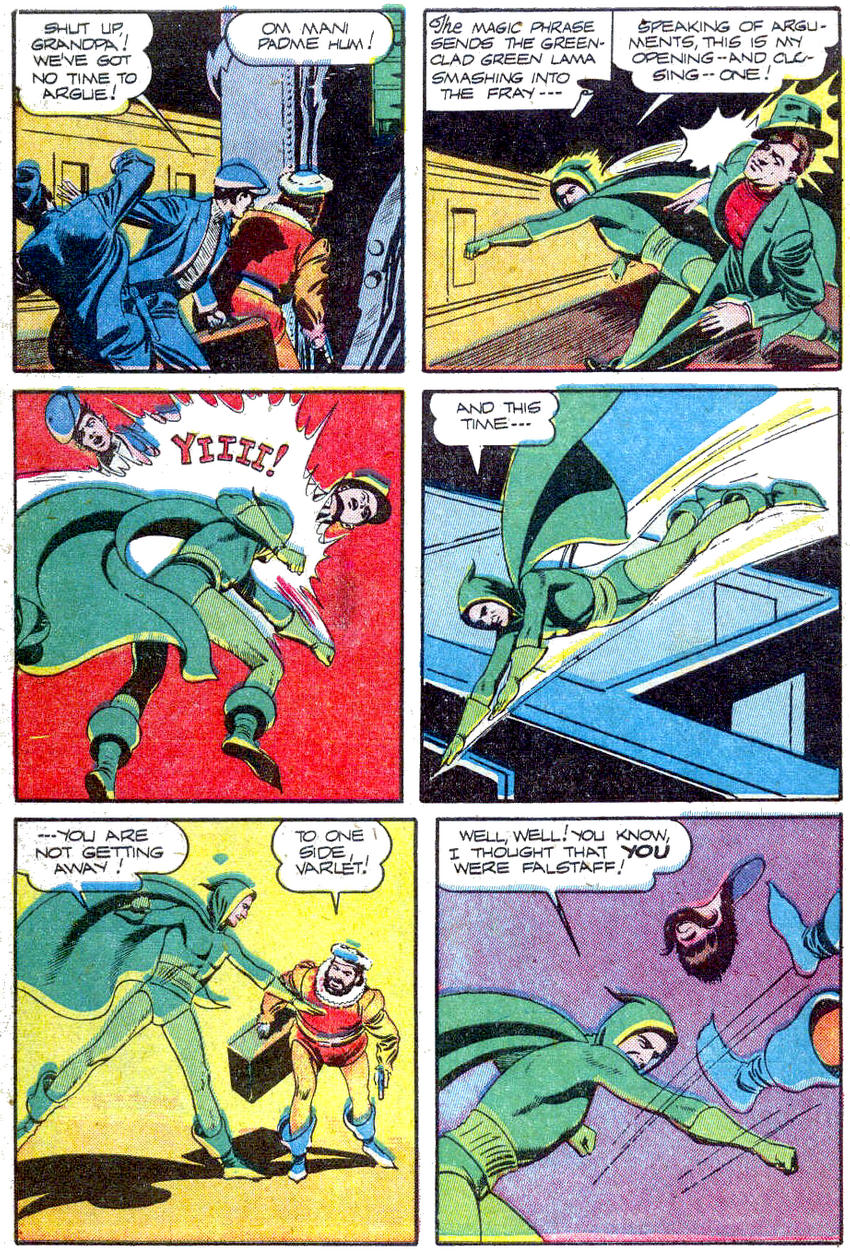 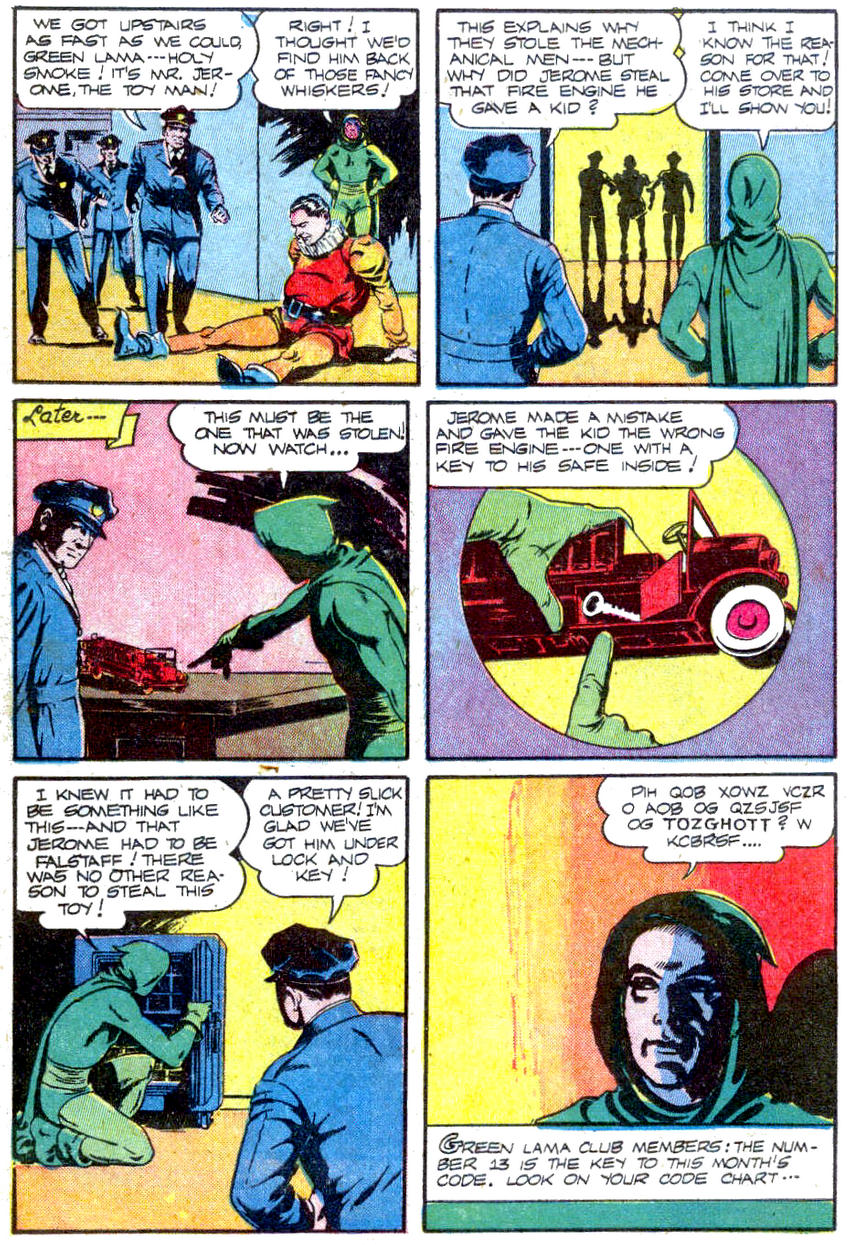 Reader Darci went to Hakes and found a Green Lama decoder for that last panel. Here it is, and thanks, Darci! 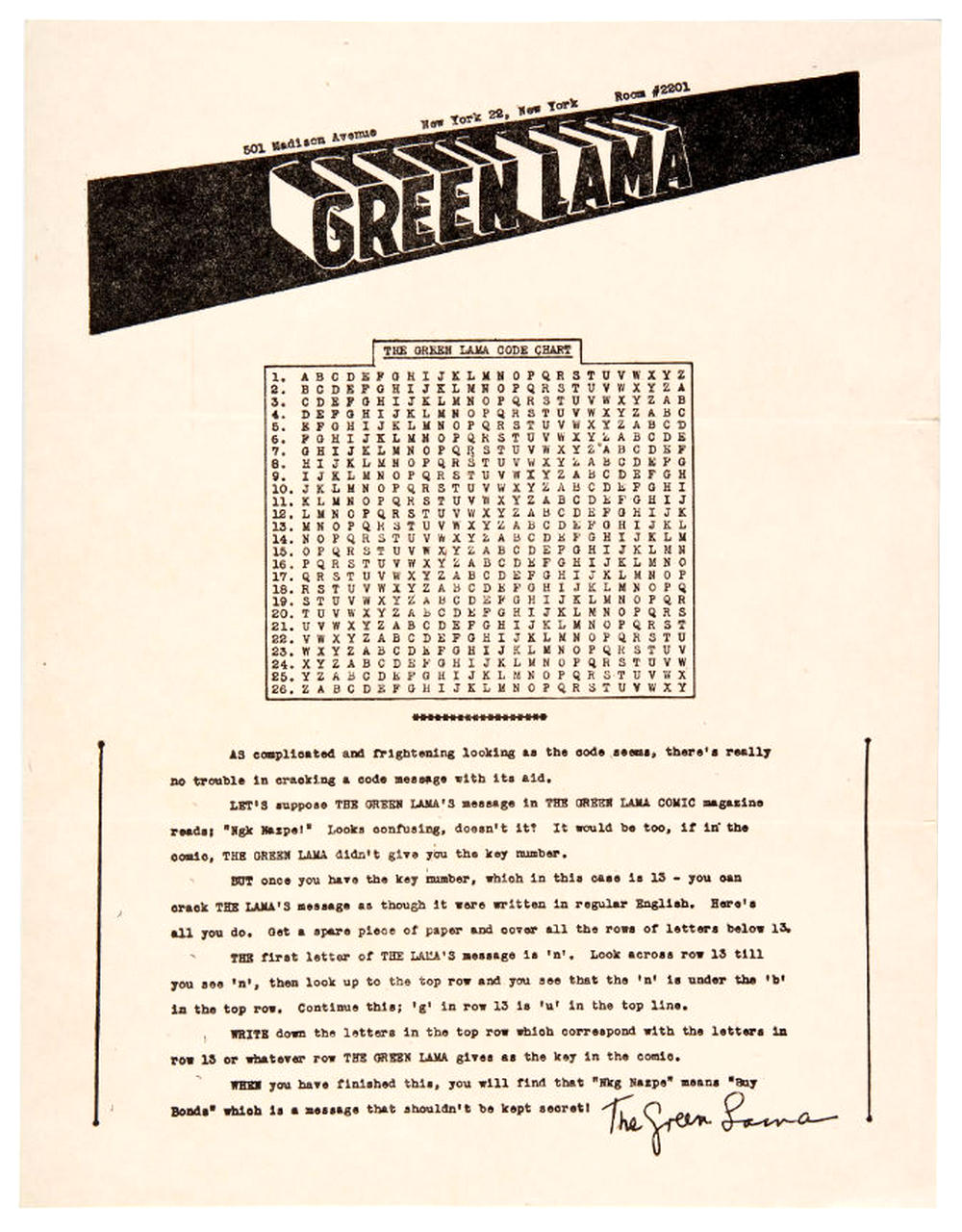 Before I saw this a couple of other readers had figured it out on their own. Check the comments for the code-breakers’ results if you’re like me and too lazy busy to do it on your own.

Another great post. Thanks! I don't have a decoder, but it's just a simple substitution code. It reads:
"But can jail hold a man as clever as Falstaff? I wonder..."

The anagram at the end says: "BUT CAN JAIL HOLD A MAN AS CLEVER AS FALSTAFF? I WONDER...."

I love the art in this one. Usually, I am a little uncomfortable with art this naturalistic in comics, which tend to need something a little more impressionistic or mythic. These humble human forms are kind of out of place in the bigger-than-life (they look like a comic version of an Errol Flynn movie to me, or maybe some Gold Key mag that relies heavily on the reference photos). But this guy can really draw! He makes it work somehow.

Hi Pappy,
No, it's not a promo for the next issue. Why not join the Green Lama club and find out?
;-)

Ed N., Mr. Cavin, Darci, thanks for the help with the code. It wasn't the Enigma code, but I appreciate all your help.

Cavin, are you familiar with Raboy's work on Captain Marvel Jr., or his later work on the Sunday Flash Gordon comic strip?

According to Jack Binder, whom I talked to in 1970, and who employed Raboy in his comic art studio in the early '40s, Raboy was a very fussy and slow artist. Binder thought just having one page a week to draw, as with the Flash Gordon Sundays, was perfect for him.

Another story I read about Raboy once was that he was in the Navy during WWII, moonlighting in comics. He had a very small surface to draw, so he drew Captain Marvel Jr the same size as it was printed. I don't know if he was still doing that with Green Lama, but he learned to eliminate unnecessary details, which gave his work a very clean appearance.

Apparently we are all hungry for golden-age puzzle games!

"Cavin, are you familiar with Raboy's work on Captain Marvel Jr., or his later work on the Sunday Flash Gordon comic strip?"

Nope. I'm not too sure I've been aware of the guy before today, but the ol' trap isn't as steel as it used to be. Thanks for the heads-up, though; I'm definitely off to check out more of his stuff. Now that you mention it, his kind of figure realism (coupled with his clean line) is pretty much the norm for Flash Gorden-like space adventure, isn't it (and Tin Tin, too)? As a fellow slow and fussy artists, I feel like he speaks straight to me!

I've heard some episodes of the Green Lama radio show, with Paul Frees in the title role; it was reminiscent at times of The Shadow.
"Om mani padme hum" means "Ah, the jewel is indeed in the lotus" or something similar.

rnigma, I have never heard the Green Lama radio shows, but I know Paul Frees' voice well. Thanks for the link.

Cavin, there are many examples of Raboy's Flash Gordon to be found online. I remember it well from the mid-to-late fifties when I used to open my Sunday funnies from the Seattle newspaper.

Checking the online sources I see that Raboy died at the young age (well, it's young to me, anyway) of 53. Years at a drawing board can kill a fella. Beware.

Pappy, as you probably know, Superman and Action comics also had cryptogram messages for their club, "Supermen of America". They used shift codes just like the Lama's.

Nate, thanks for reminding me I may be still on the rolls of Supermen of America. I lost my membership kit in the late fifties when my father uprooted our family and moved us to another state.

Alicia, thanks for the Elvis/Captain Marvel Jr connection. I read once that because Freddy Freeman (Capt Marvel Jr) had a ducktail haircut it inspired Elvis to wear his hair the same way. I had not heard about the cape and lightning bolt being influenced by the character, but it sounds right.