Number 1547: From that wonderful artist who brought you Casper the Friendly Ghost and Richie Rich... 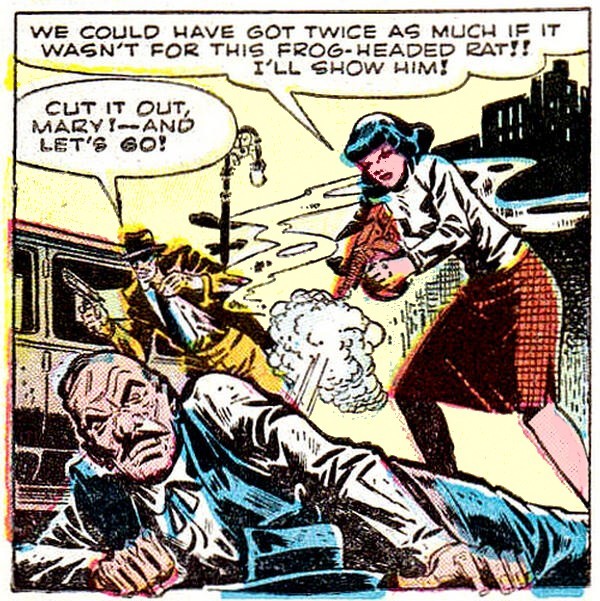 I’ve shown another crime story (check the link under this story) by Warren Kremer. He is probably best known as being the master cartoonist who for years drew Casper and Richie Rich, Stumbo the Giant and other Harvey Comics characters. In his early career Kremer was known to do crime stories, and also did work as designer of some of the most gruesome early ’50s horror covers for Harvey Comics. 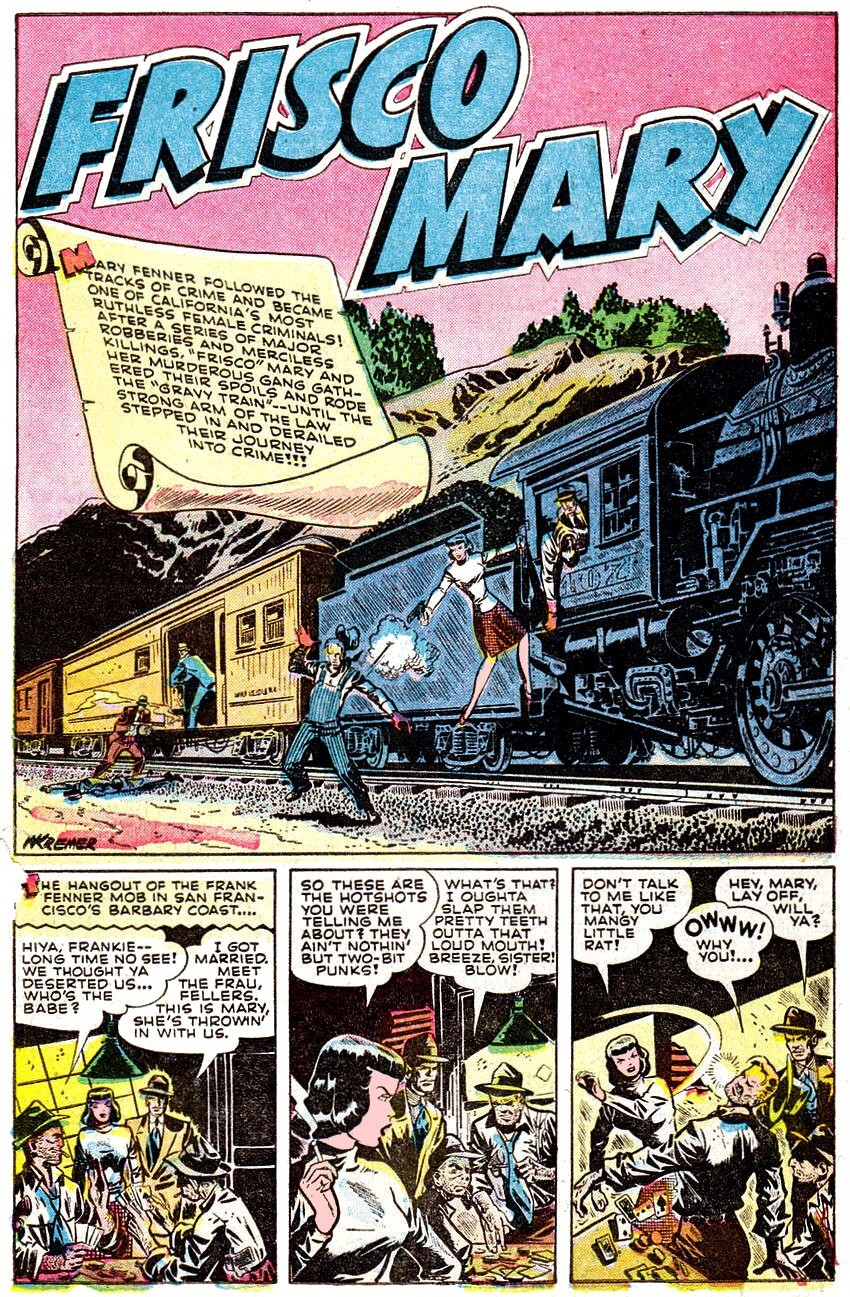 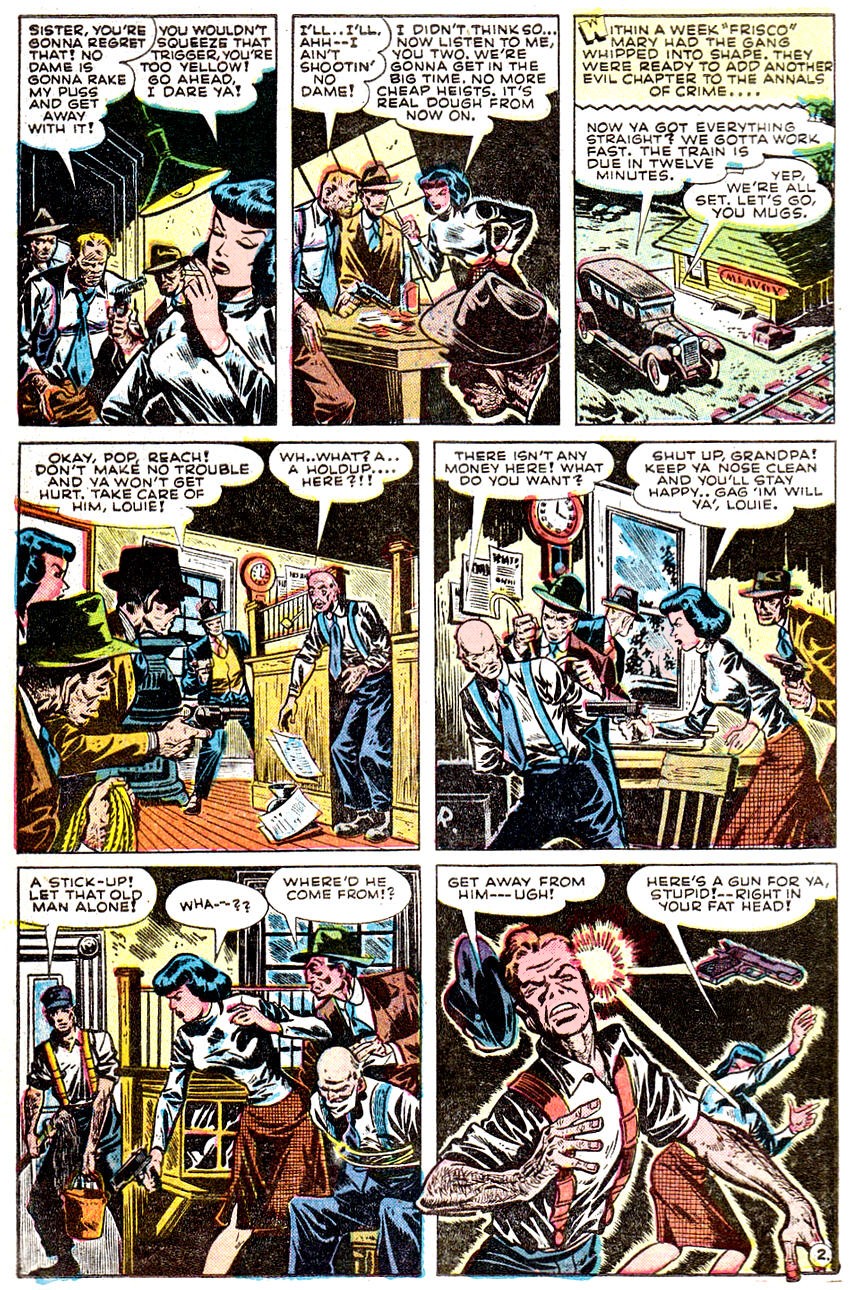 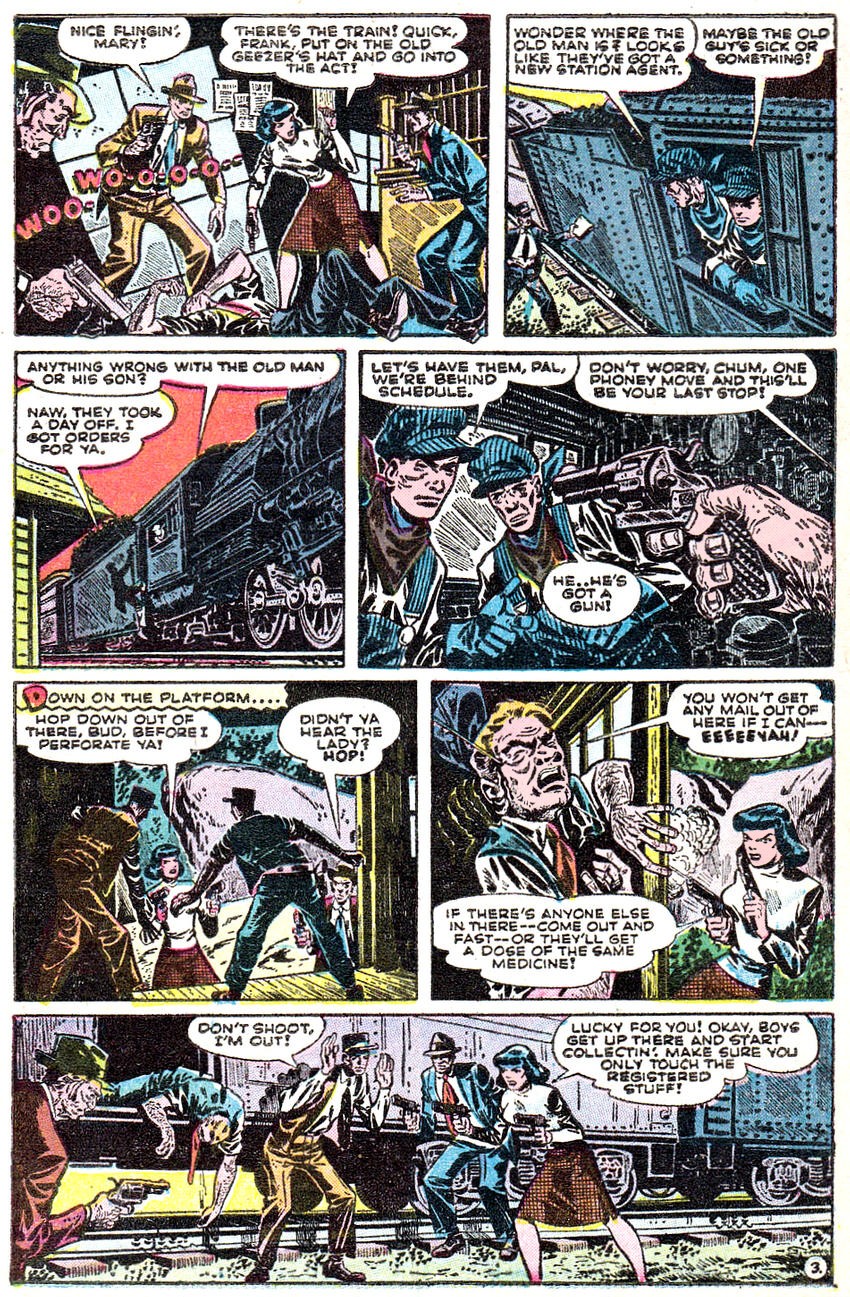 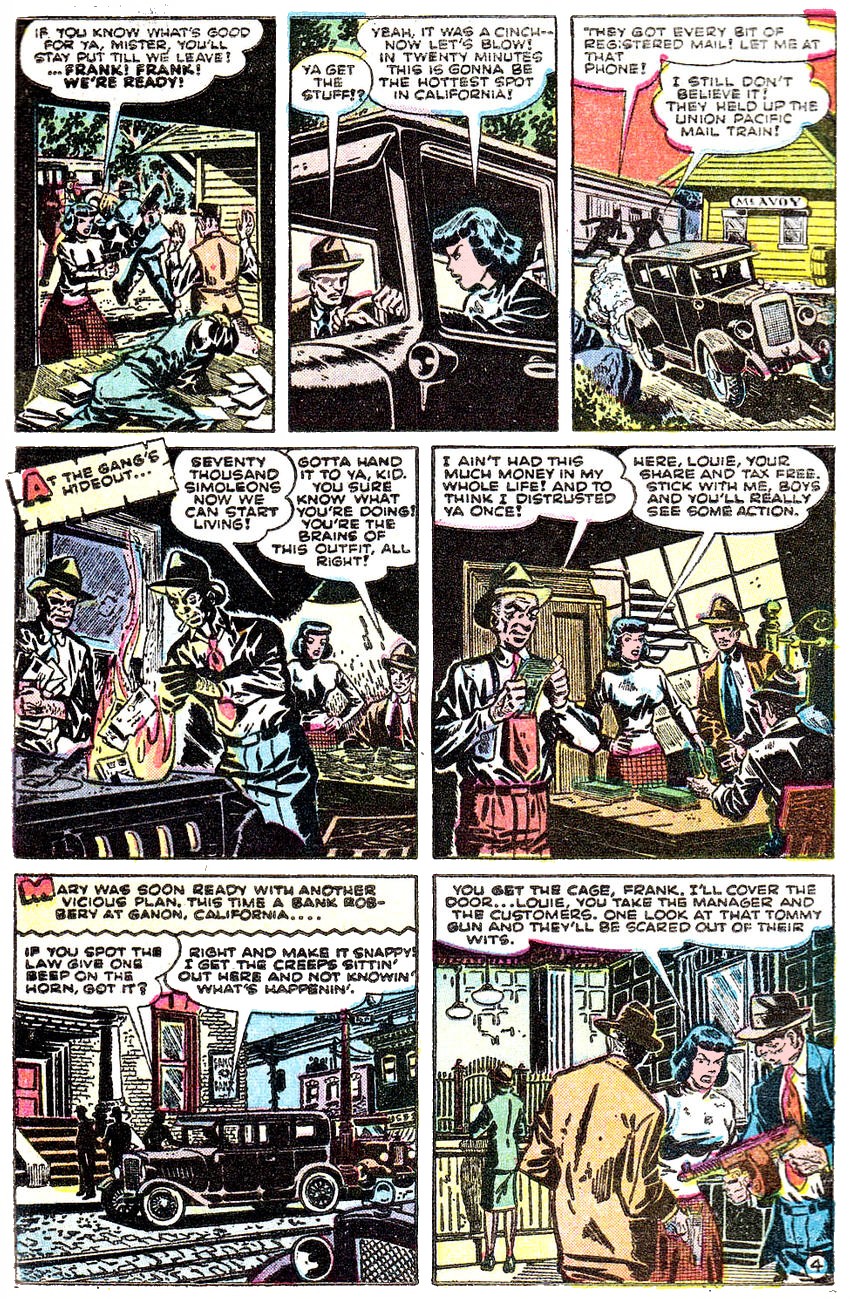 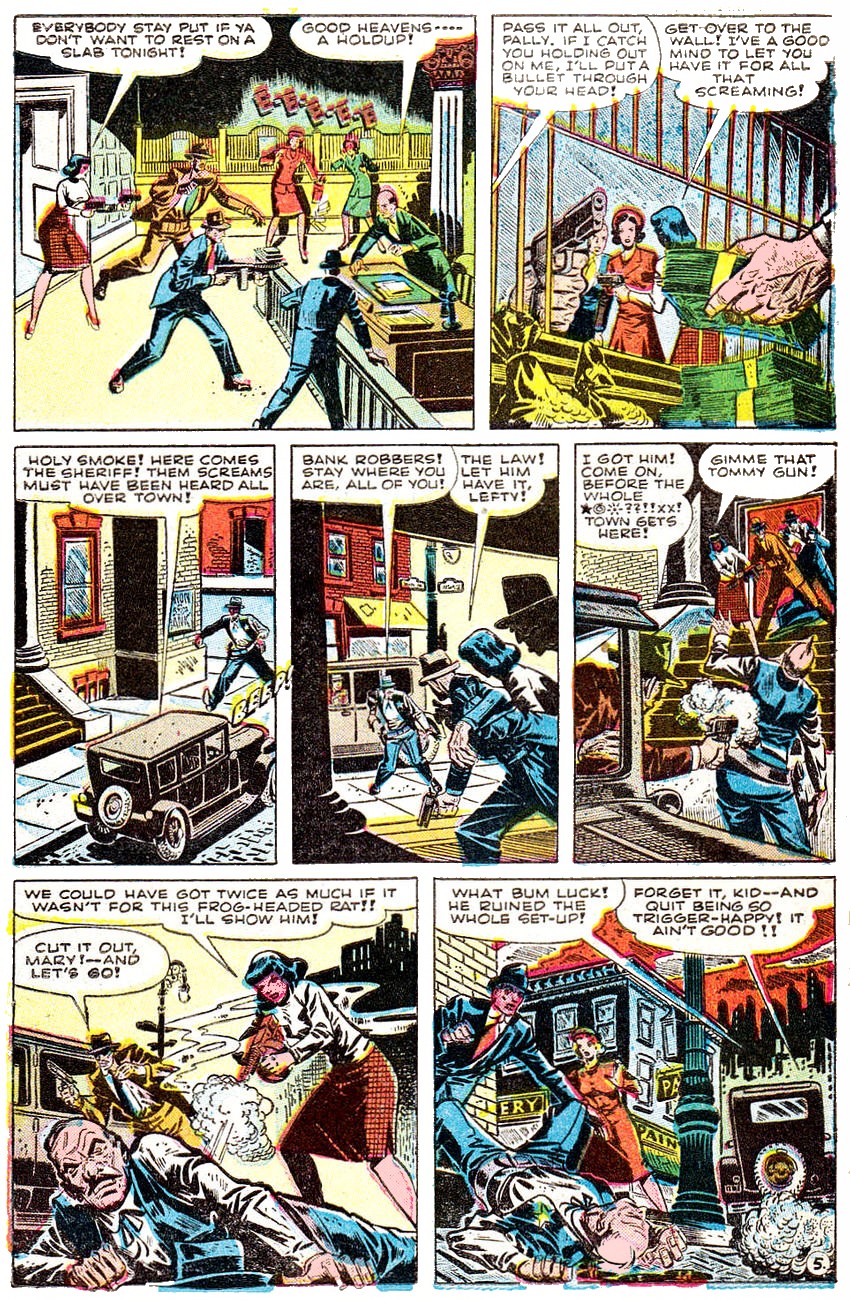 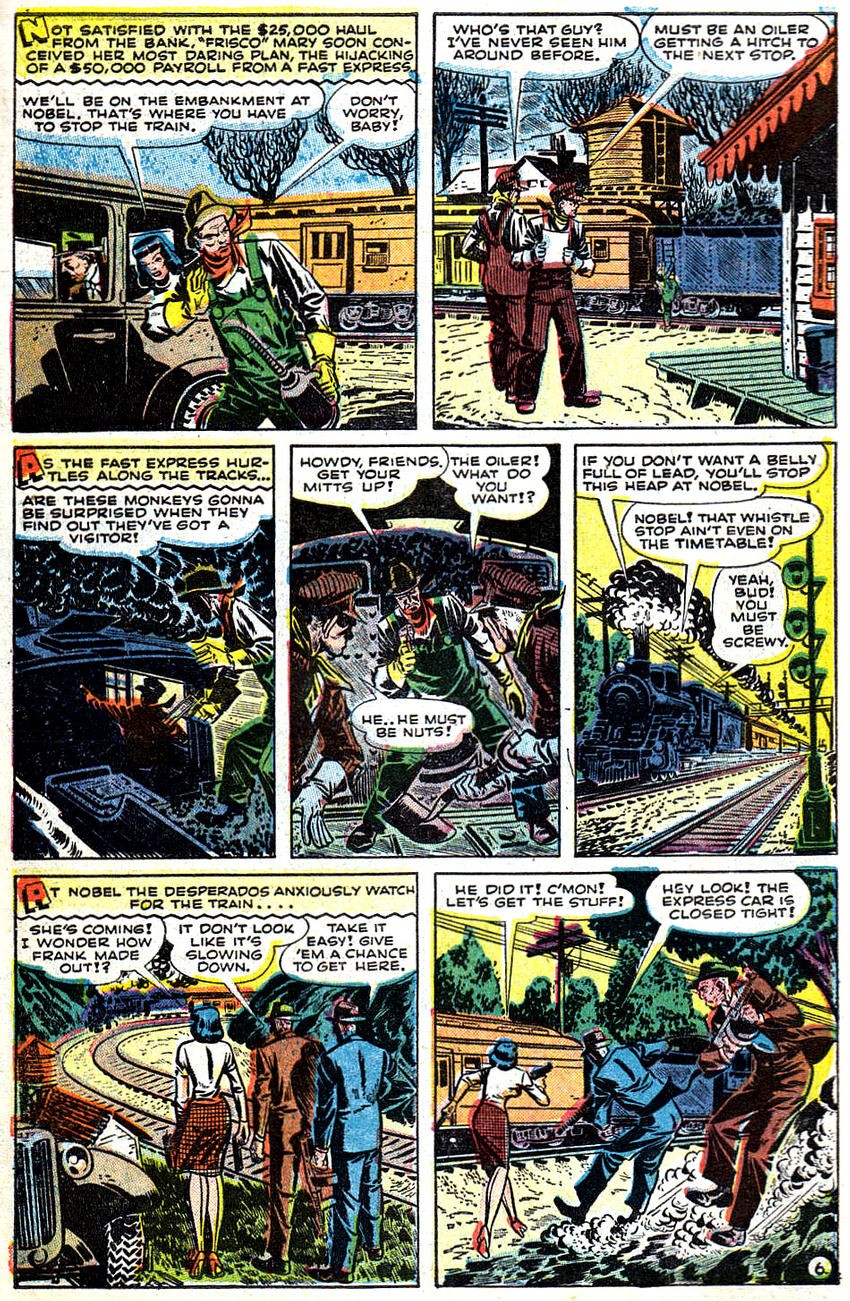 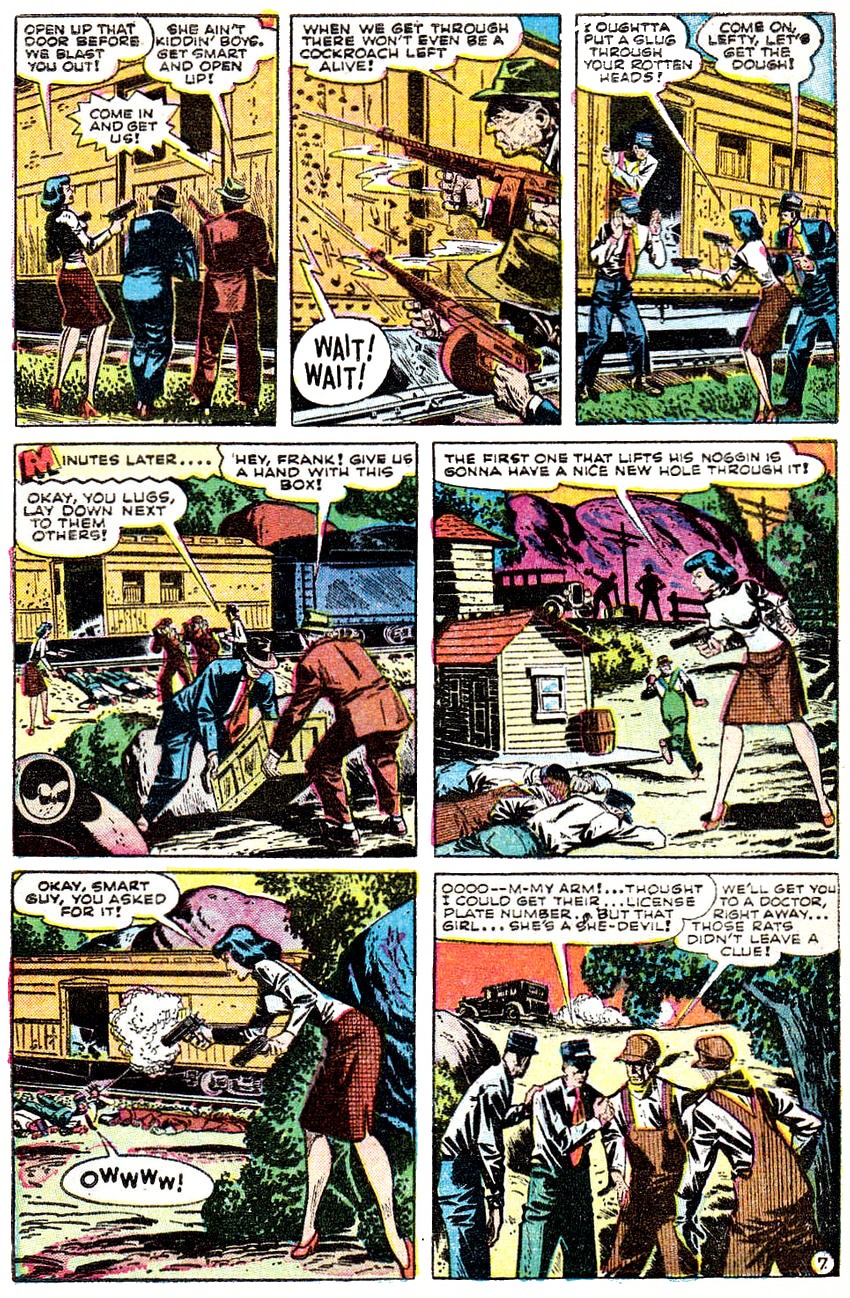 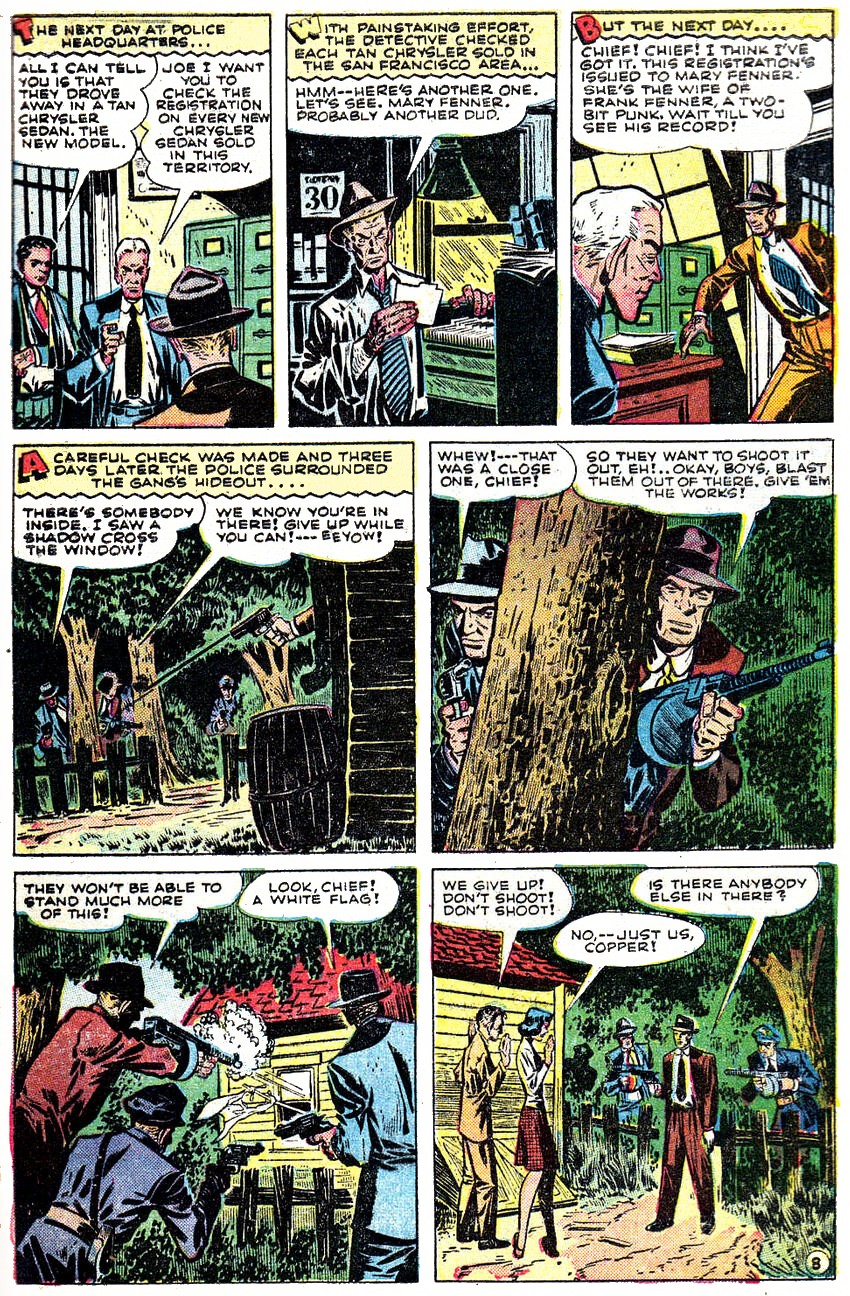 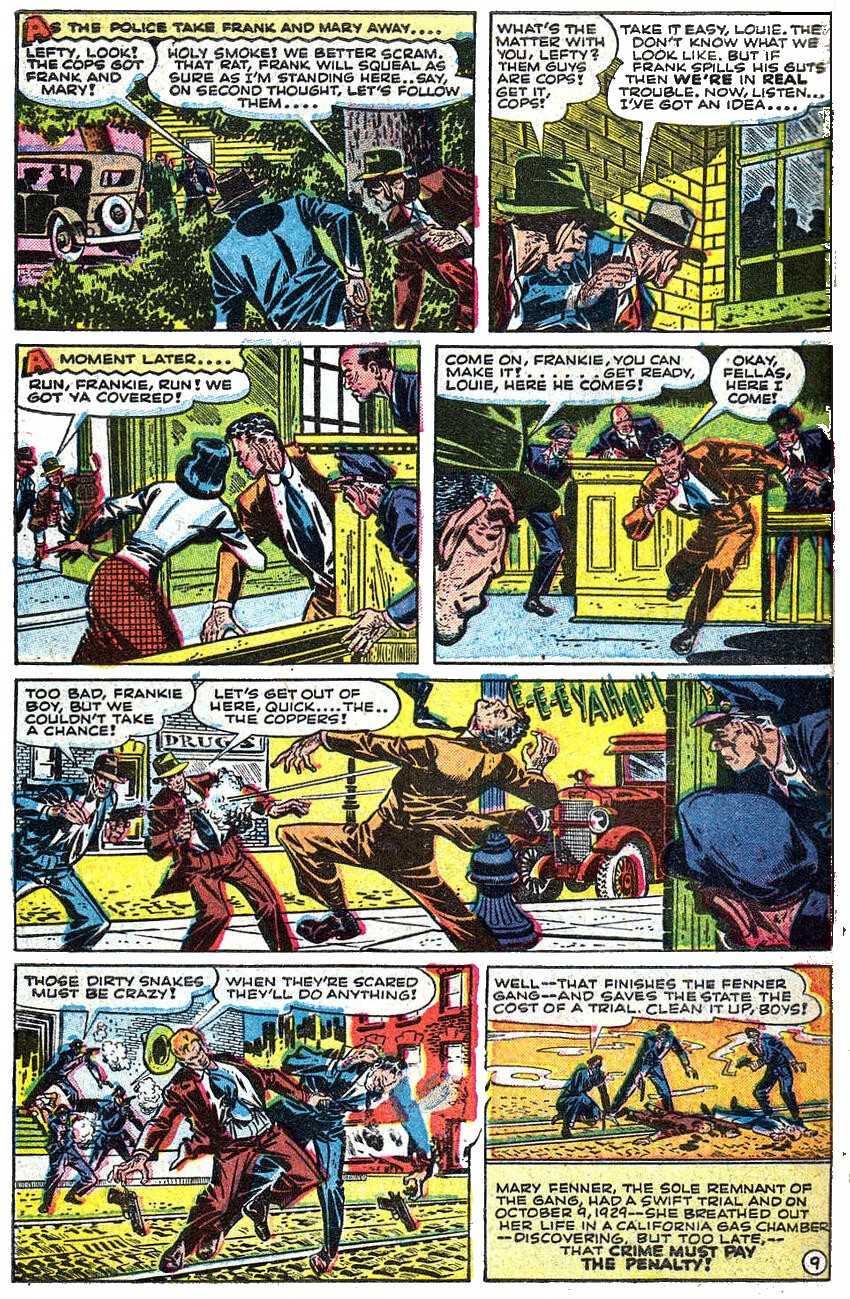 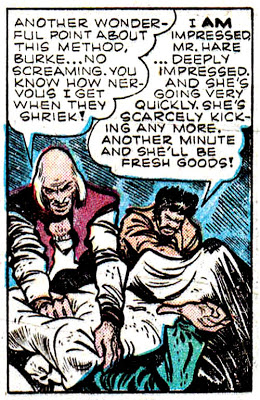 The man could really alter his style, couldn't he? That's actually pretty amazing.

A fun part of crime comics is looking up the "real" story, and a quick search didn't turn anything up on Frisco Mary, but if she was real, they certainly sexualized her.

I doubt they did it for any other purpose but to draw a pretty lady, but the FBI certainly did it to criminal females in the press, most notably Bonny Park who they portrayed as crude and sexual.

Brian, I haven't seen anything on Frisco Mary, either, and I usually check the real life counterparts if there are any before posting...with this post I was more interested in the fine illustrative work of Warren Kremer. He even signed it. He must've thought he did a good job, too. In looking at it I marvel at the work he put into the trains, especially. He was a great artist.

The first woman executed in California was Ethel Leta Juanita Spinelli, on 21 November 1941. It's still possible that there were a Frisco Mary Fenner, who simply died under other circumstances, but I doubt it.

This particular story was discussed in the Kefauver hearings, and described thus: “One story in this particular issue called ‘Frisco Mary’ concerns an attractive and glamorous young woman who gains control of a California underworld gang. Under her leadership the gang embarks upon a series of hold-ups marked for their ruthlessness and violence. Our next picture shows Mary emptying her submachine gun into the body of an already wounded police officer after the officer has created an alarm and thereby reduced the gang’s take in a bank holdup to a mere $25,000. Now in all fairness it should be added that Mary finally dies in the gas chamber following a violent and lucrative criminal career.”

Oh, and I looked-up when California legally adopted execution in the gas chamber: 27 August 1937.

Daniel...if I had the ability to grade your report I'd give you an A.

Kefauver report, indeed! As if every day you couldn't read the same sort of thing in every newspaper in America, or hear the reports on the radio. While my mother criticized my love of crime literature, she admitted that when she was in junior high in the early '30s the kids in school would talk excitedly about the gangsters in the news, Dillinger, Bonnie and Clyde, and her personal favorite, Baby Face Nelson. Nelson had died in a gun battle with my mother's cousin, FBI agent Sam Cowley, who in turn died of Nelson's bullets.

Lovin' the Kremer, Pappy! And digging your Crime Wave graphic! I concur with Brian's comment about Kremer's ability to vary his style...a very talented and gifted artist.
Very interesting to read Daniel's comment about the hearings...that panel mentioned is a wowzer!
Interesting anecdote about your connection to Baby Face Nelson, too!
Anyway, as always. love your blog!