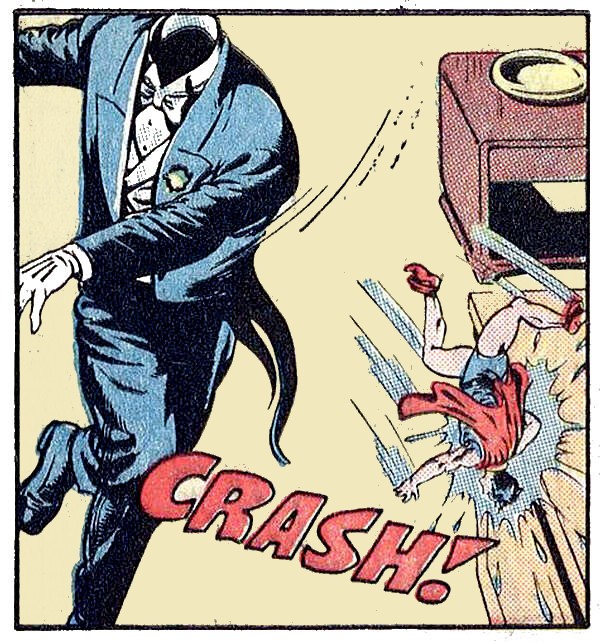 This is day three of our Week of Quality, featuring popular characters from Quality Comics of the forties.

“The Dress Suit Murders” from Doll Man Quarterly #9 (1946) is intriguing to me because we have what looks like a headless man committing murders, and because he is in evening wear, he is called not “the headless killer” (which would be my choice if I were writing the newspaper headlines that would accompany the lurid stories of his murder spree), but “Dress Suit.” That’s about as unlikely a name for a killer as any I can think of, but the name also provides a clue to the murderer.

The story is well-drawn, according to the GCD,  by Dan Zolnerowich, who also did superior work for Fiction House. The cover illustrating the story is by Al Bryant. 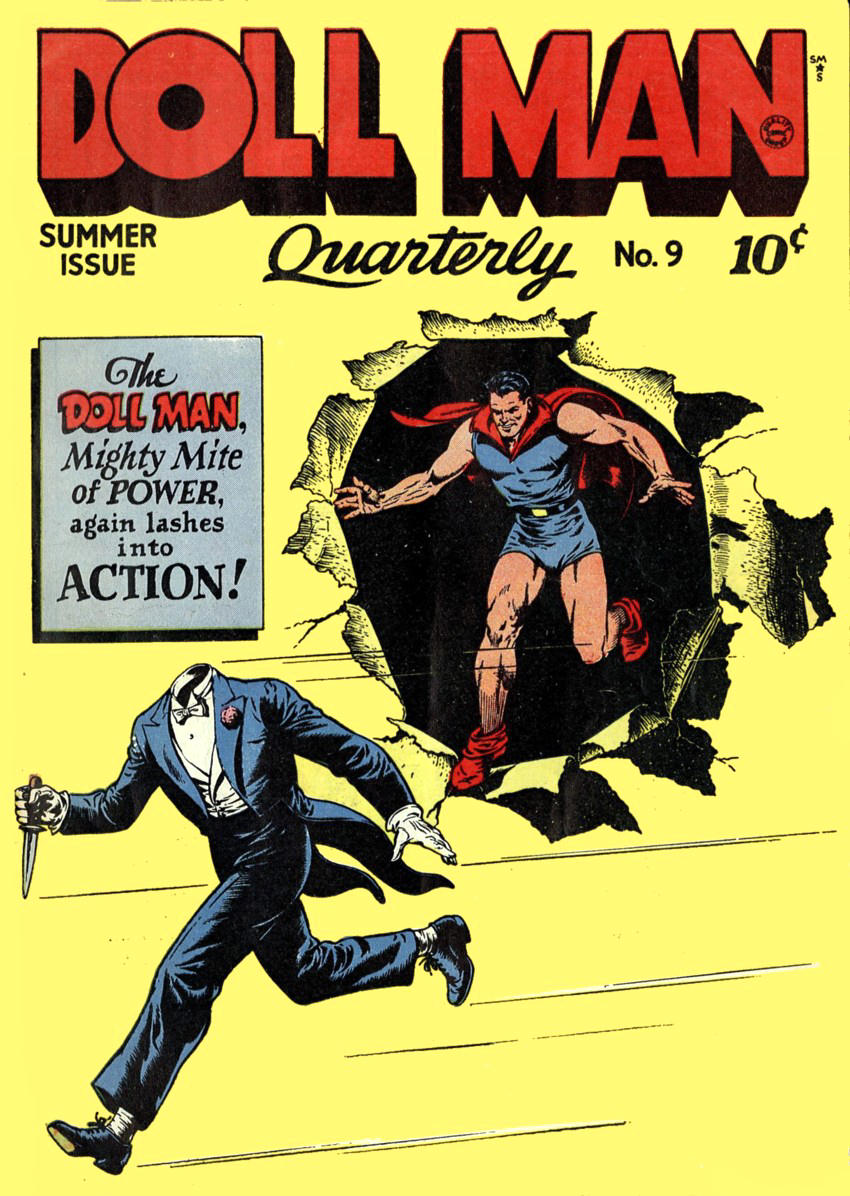 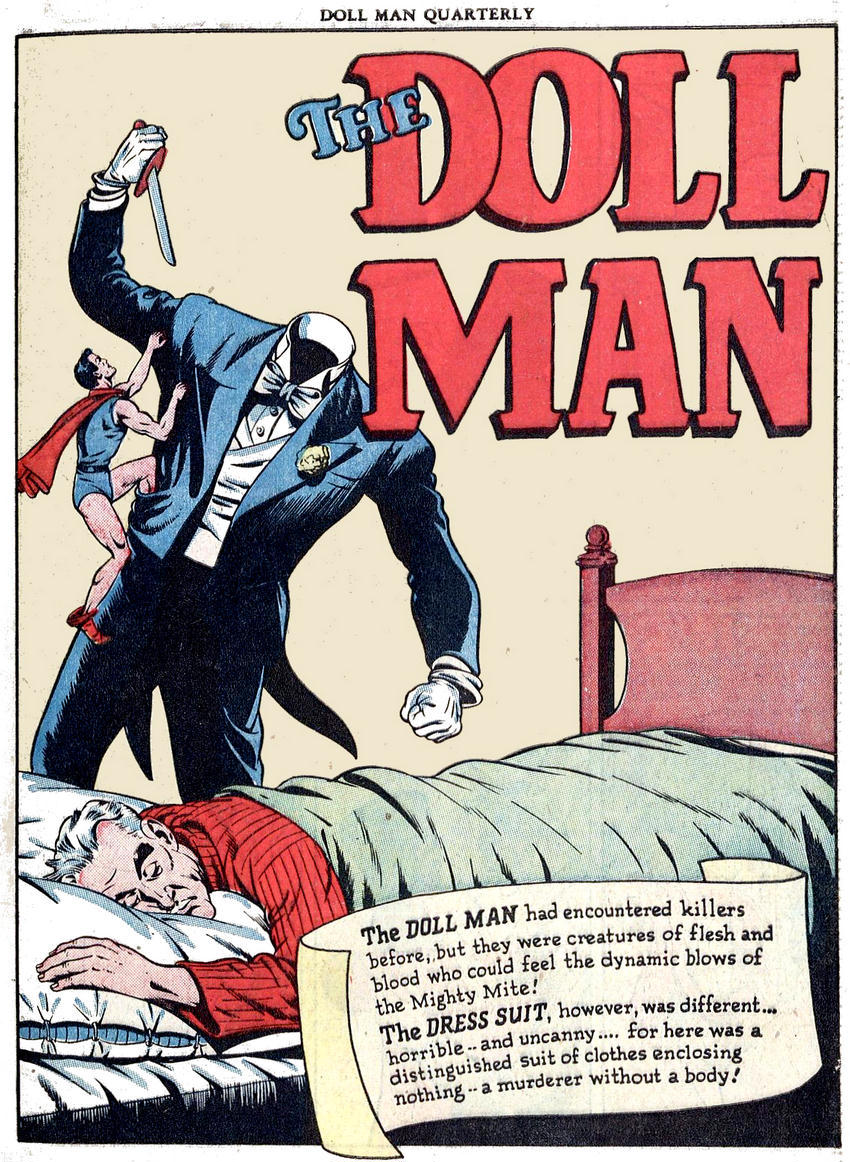 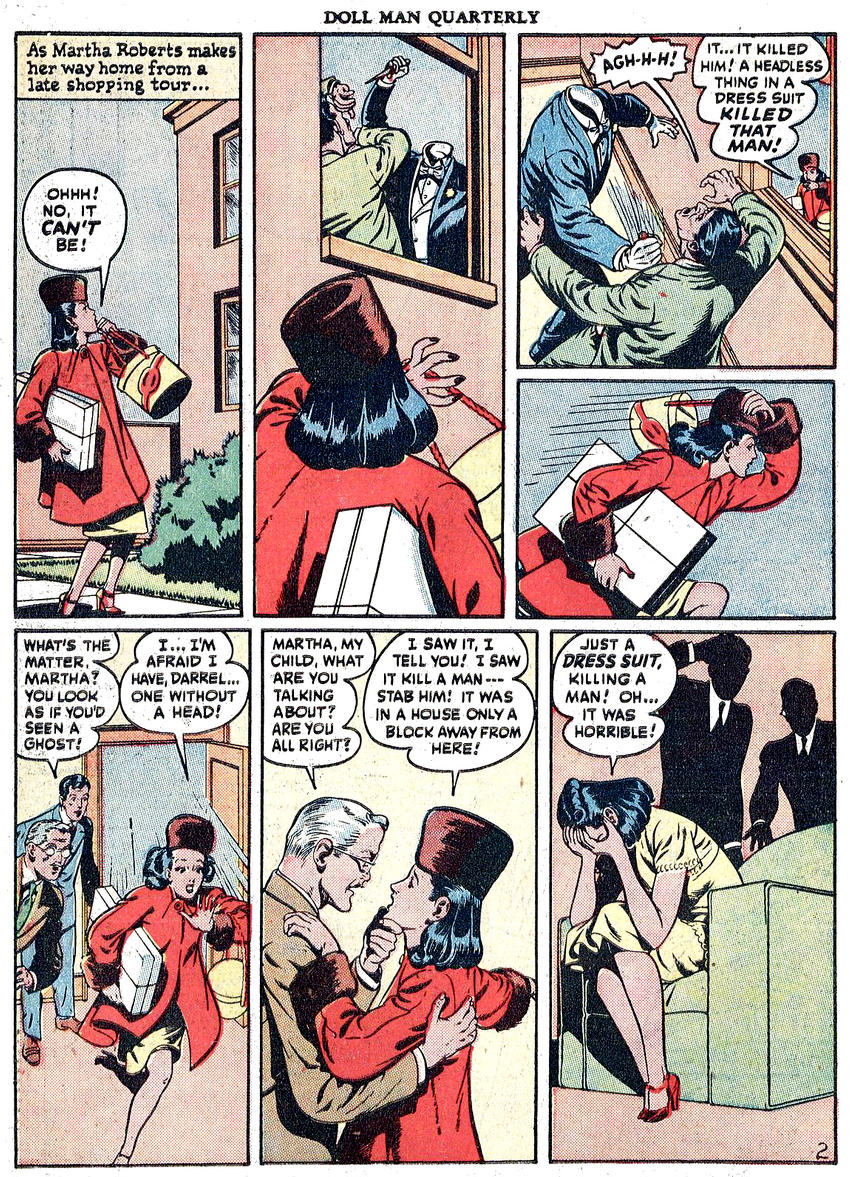 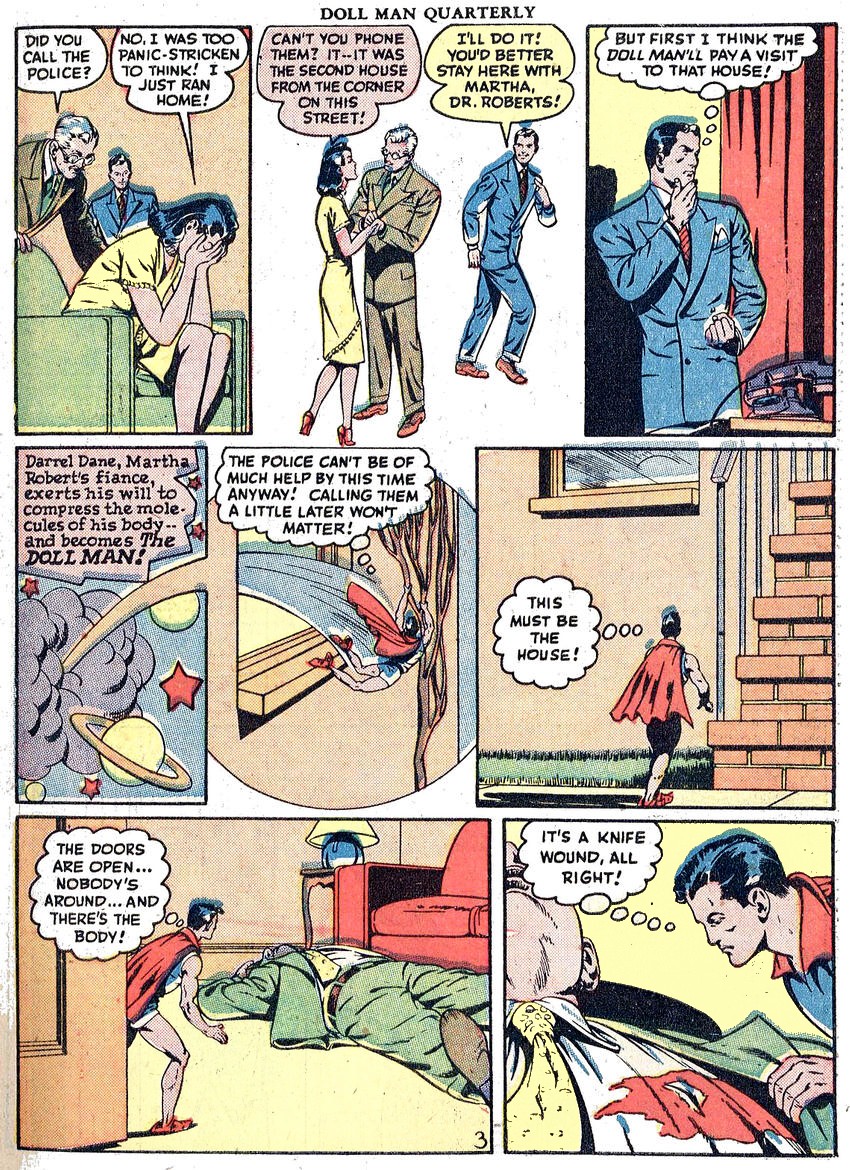 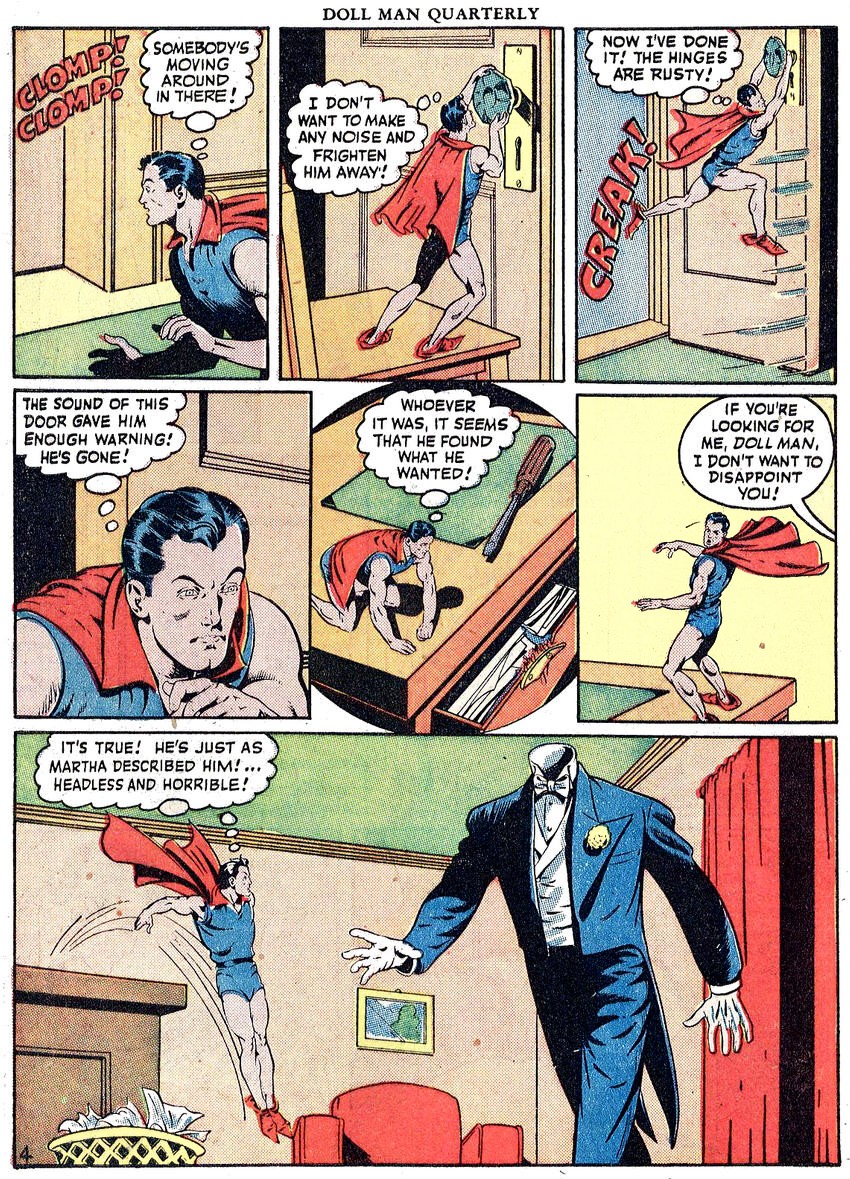 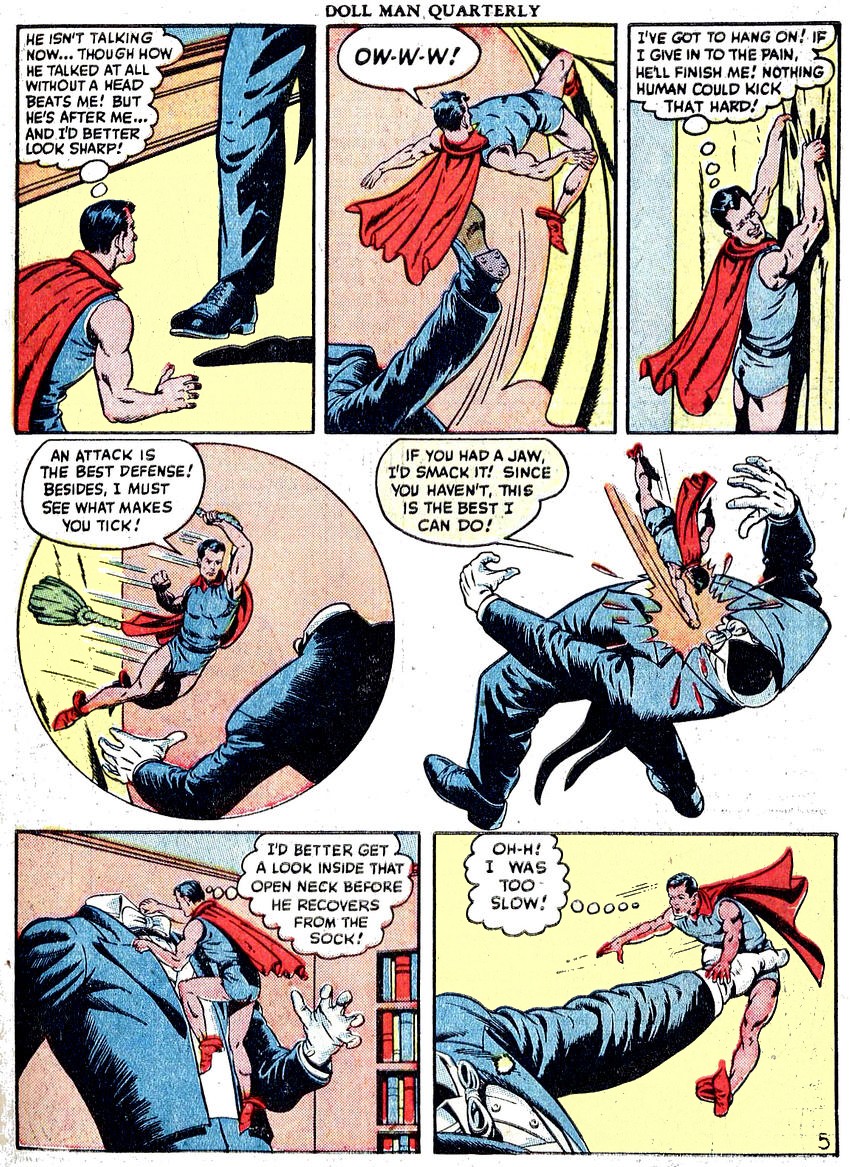 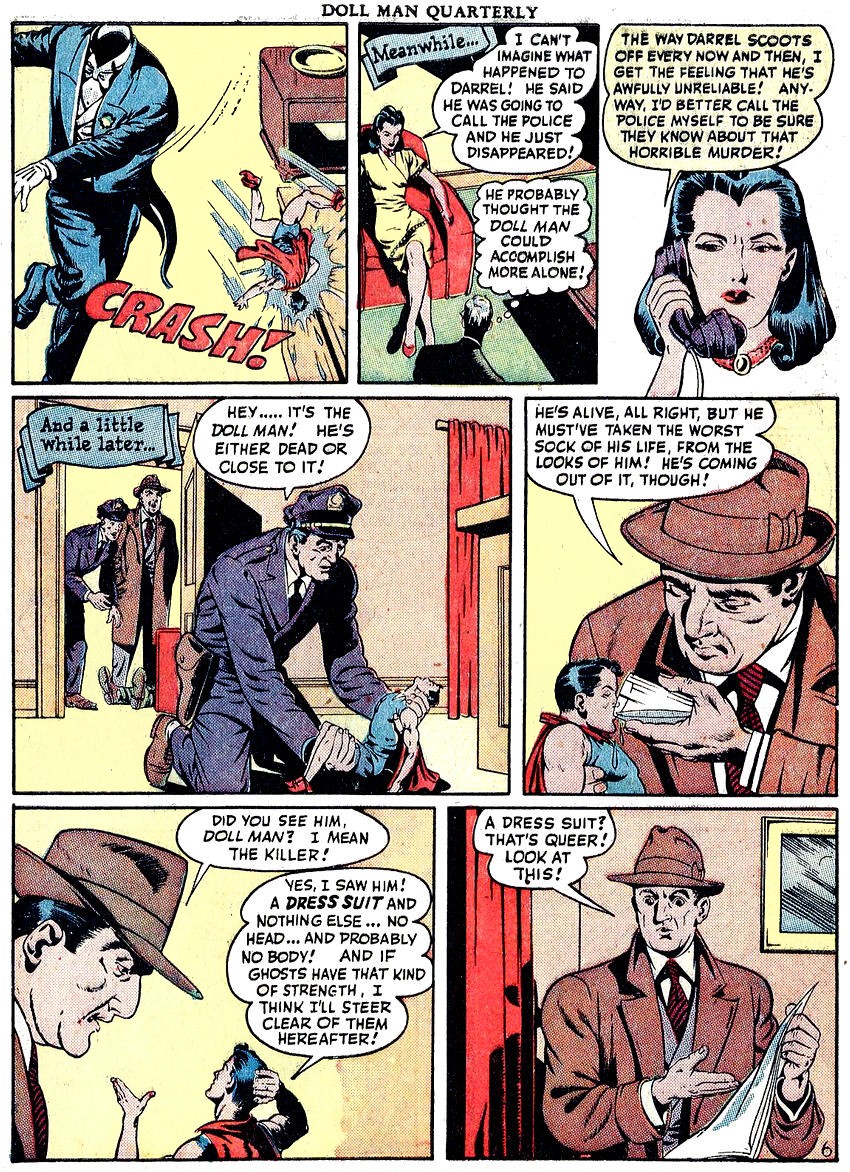 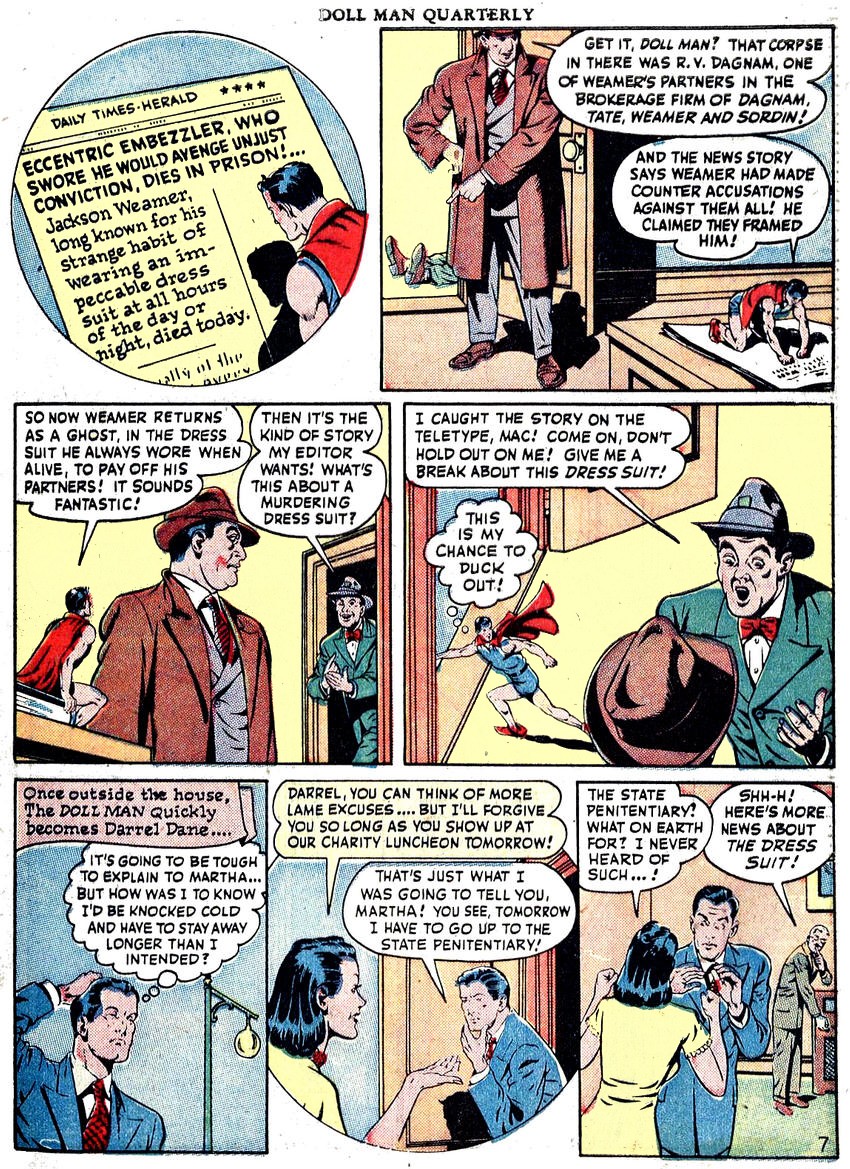 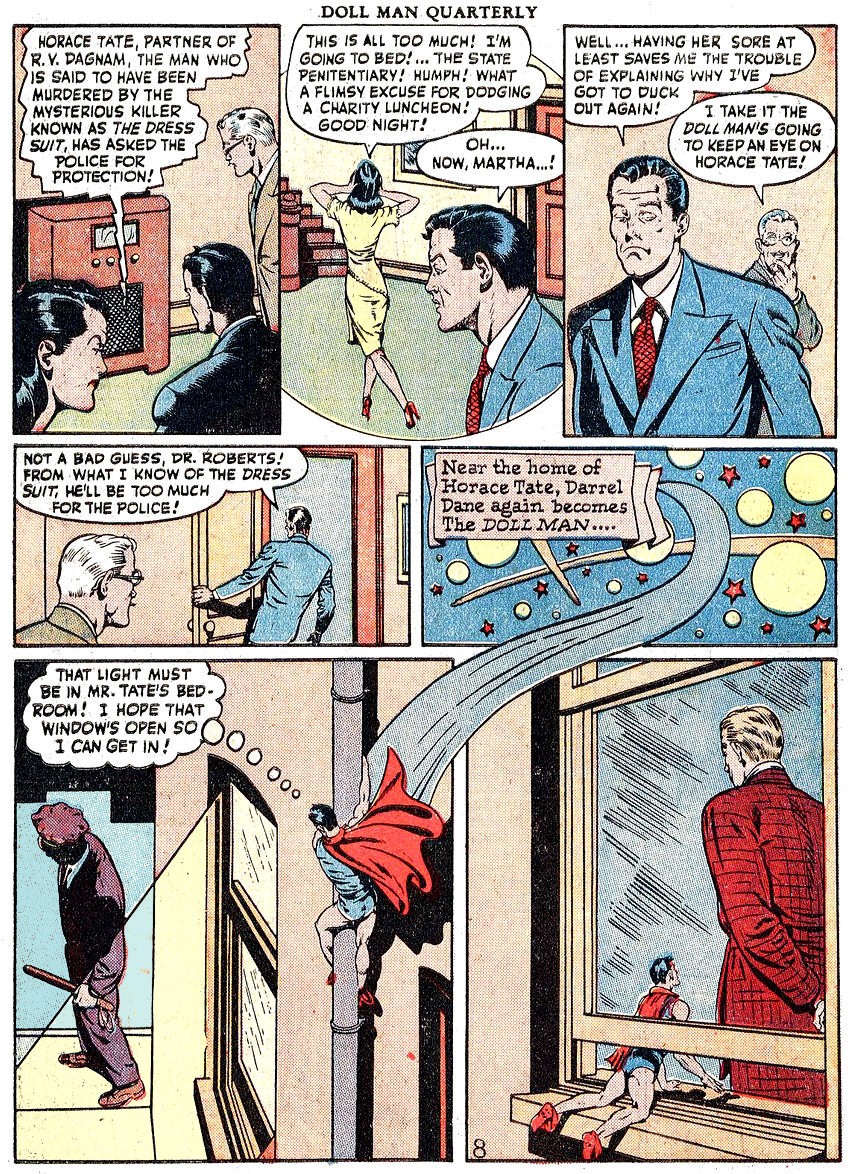 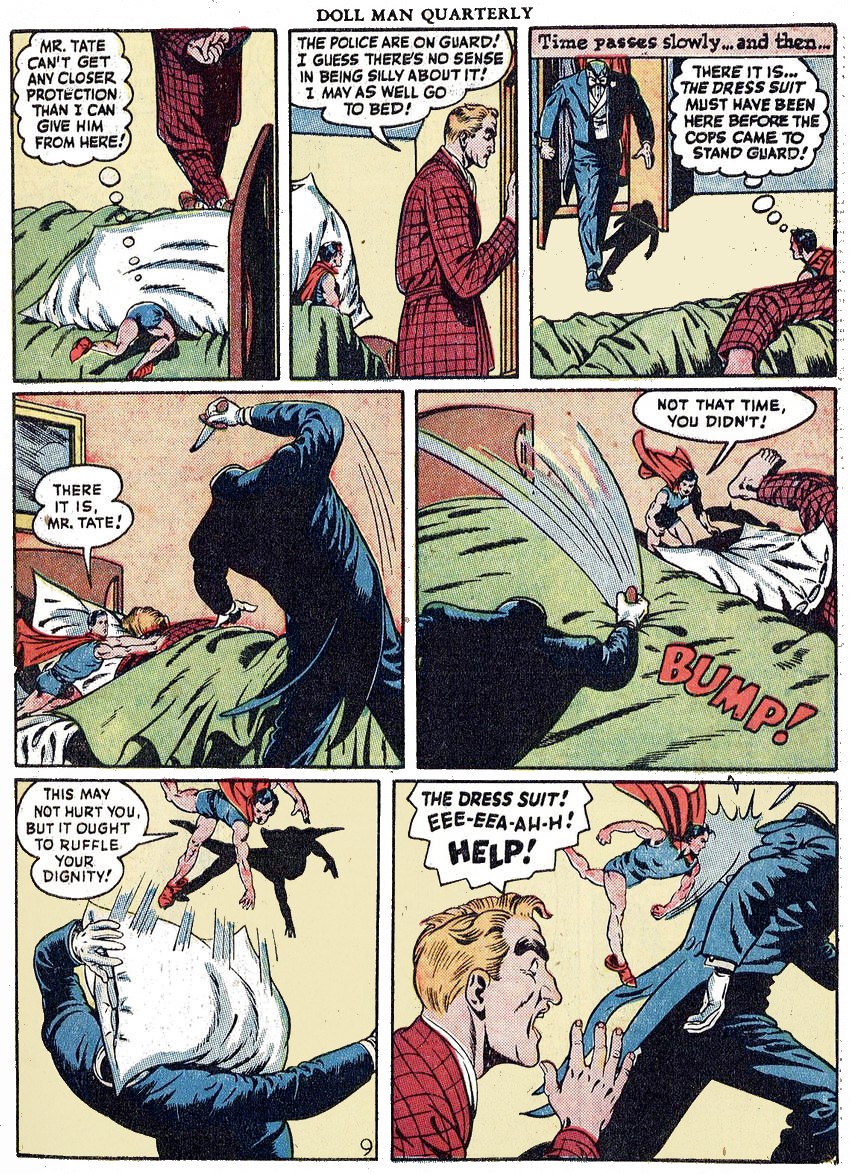 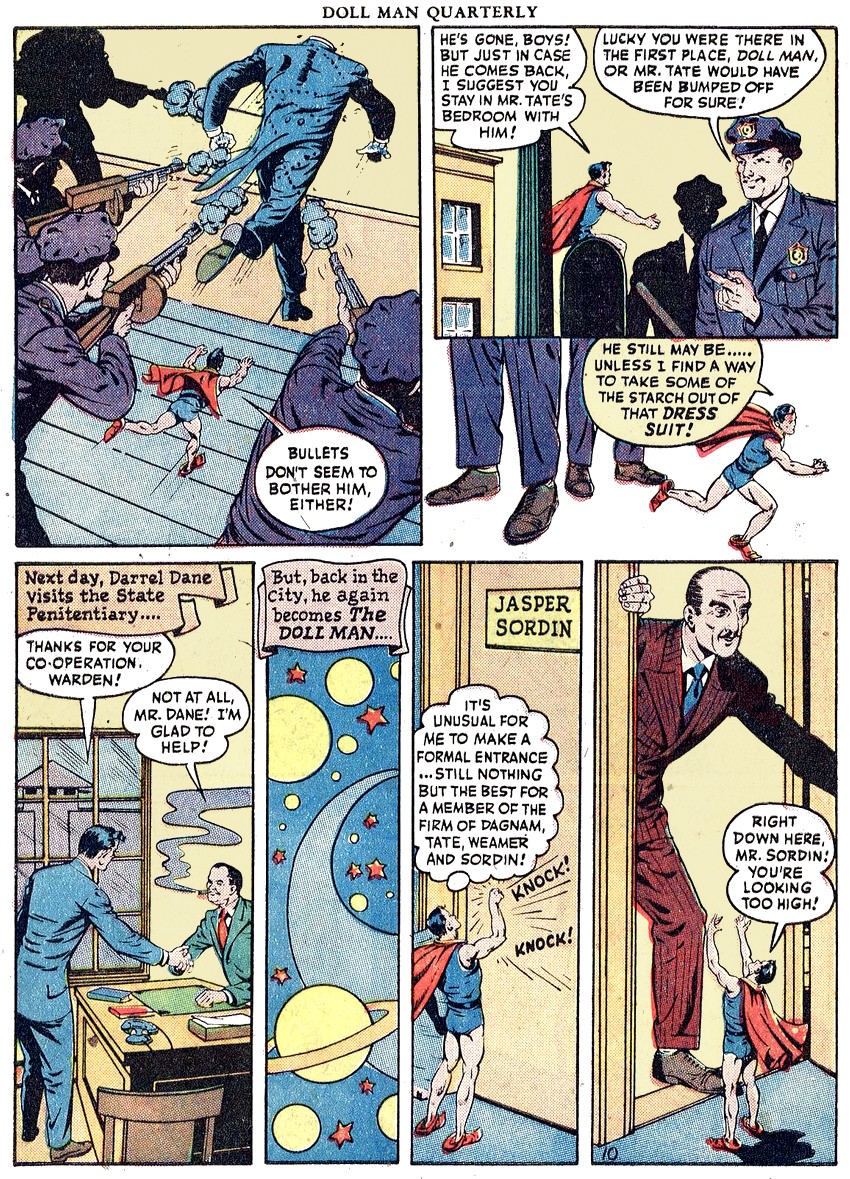 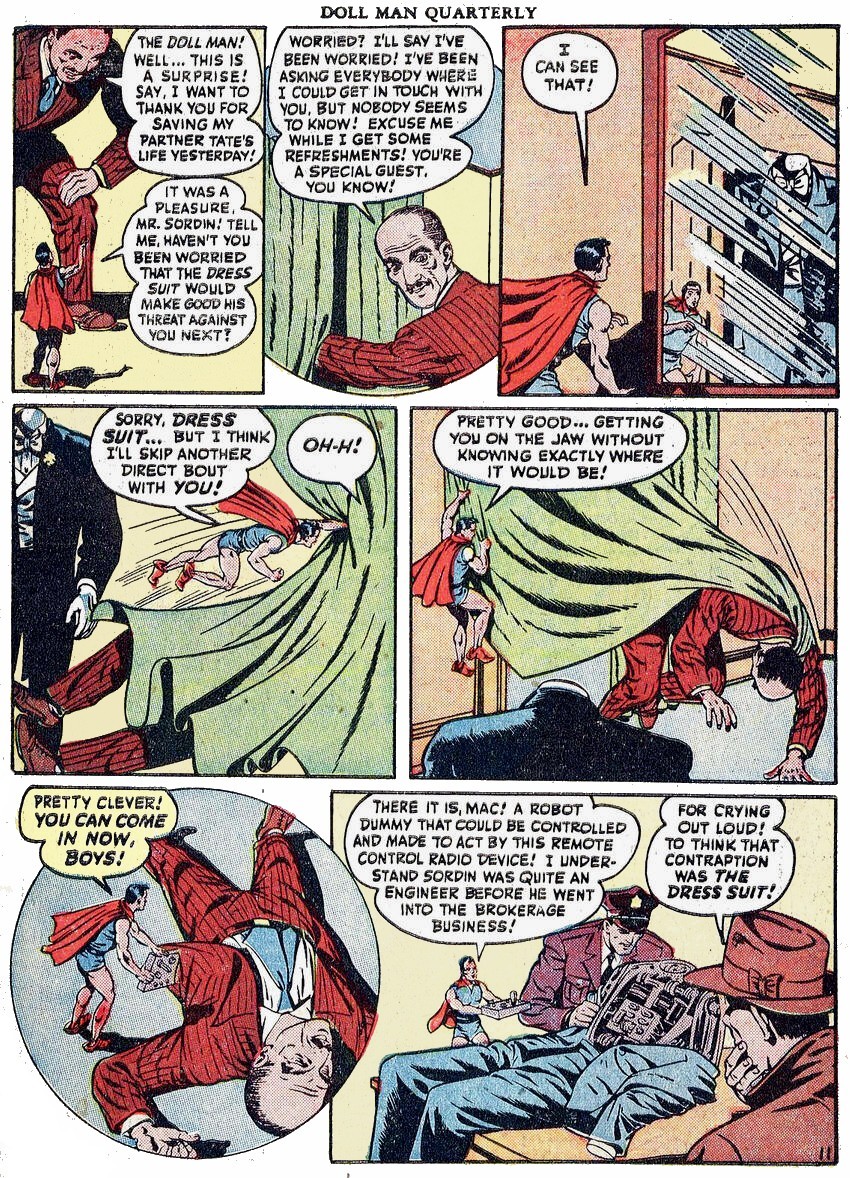 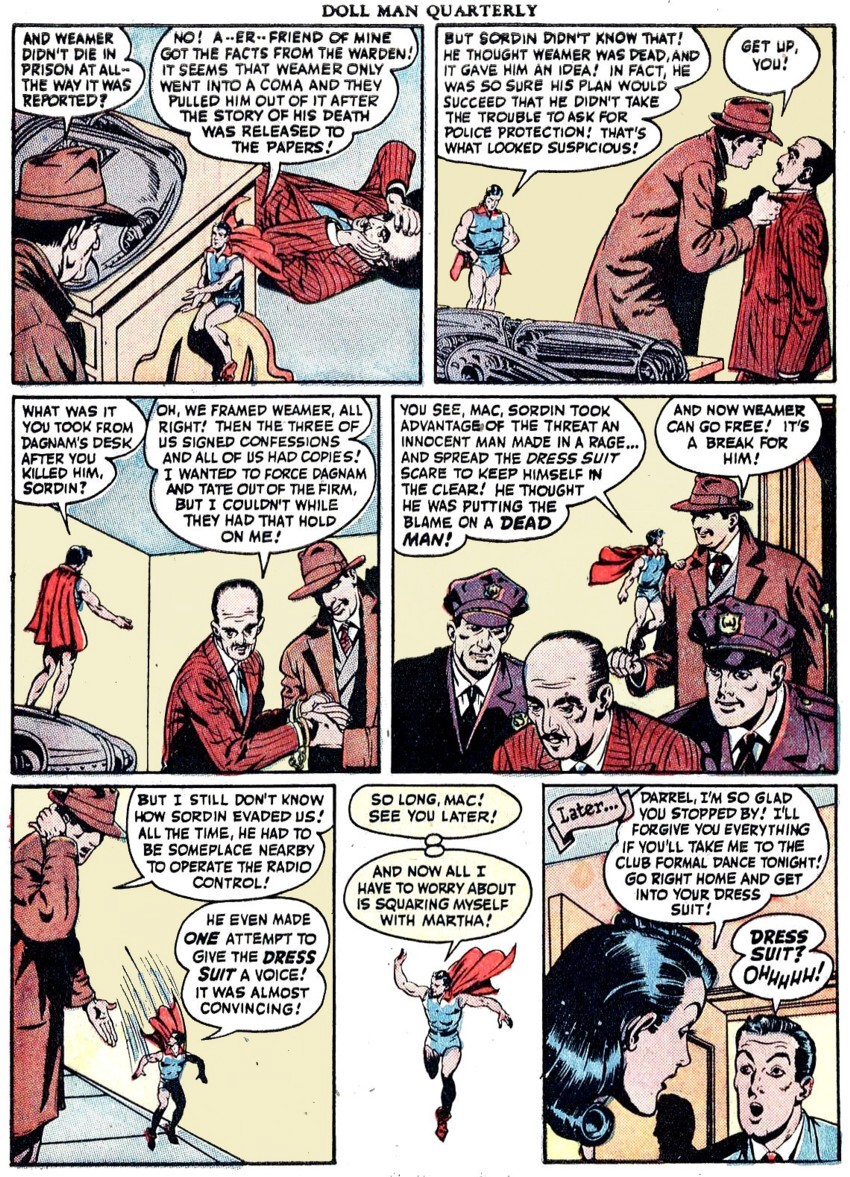 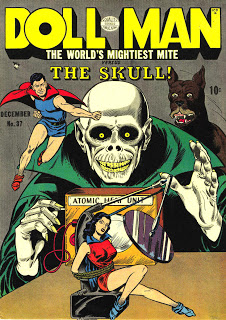 Indeed nicely drawn! And I don't think that I've previously seen, anything in a comic book of that era or earlier, like the silhouettes of the final panel of the second page.

Phew, that one's pretty bad. Martha comes off worse, witnessing a murder, hurrying home with the shopping, having a little breakdown, THEN notifying the police...WIMMEN! AMIRITE?!?, said the douchebag.

But Darryl also gets his chance to stink the place up, punching Dress Suit in the back, getting punted to near-death (Doll Man's been stepped on and smashed like a fly with a gun butt in other stories, and just shrugged it off), and that final panel may be the most overdone final-panel gag in comics history, but here Darryl's overreaction is absolutely skin-crawling. (Points for his horrified reaction to Martha's badgering earlier, although it still makes him look like an even bigger puss.)

For all the hysteria earlier, Martha sure recovered from seeing a guy get ganked with a knife before her very eyes. (In yet another story she faints at the mere mention of the word "blood.")

I am a fan of both Zolnerowich and Bryant. Among a few others in the Golden Age, they had a clean and realistic style of drawing that was enjoyable to read.

I must say I always find Doll Man a bit creepy! Little people - Yikes! The scenes where the cop was lifting and giving ol' Dolly a drink of water was odd and amusing though!

Daniel, interesting catch on those silhouettes. My eye passed over them. I usually feel a little cheated by silhouettes, although they can add visual interest to a page. The way Zolnerowich did them is unusual.

Billy...“ganked with a knife”? Thanks for adding a word to my vocabulary.

Apocolyte, after reading many Doll Man stories over the years I am reminded that when DC revived the Atom he was not as he had been in the '40s, a short, athletic guy, but a guy who can shrink, like Doll Man, and retain his full-size strength...like Doll Man. It worked once, and it worked again for DC.

I'm not sure what I'd do if I turned and saw a guy 9" tall standing by my ankle. Like you said, a bit creepy. And full-size strength or not, wouldn't he squeak when he talked?