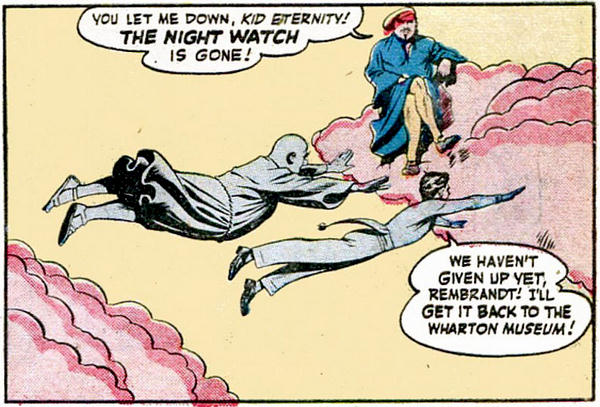 Kid Eternity exists in an afterlife called Eternity. Kid Eternity can travel back and forth to Earth and correct injustices by shouting “Eternity!” and having the manifestations of deceased persons with the proper credentials (except when calling in a fictional character like Inspector Javert, as in this story) help him do his good deeds. In this story from Kid Eternity #3 (1946), K.E., and his buddy, Mr. Keeper, help Rembrandt Van Rijn bring back a hijacked painting, “The Night Watch,” by the old master,

This is the first day of a theme week, our second Week of Quality.* We will feature characters who did well for Quality Comics during its own Golden Age of the forties, including Blackhawk, Doll Man, and Plastic Man. 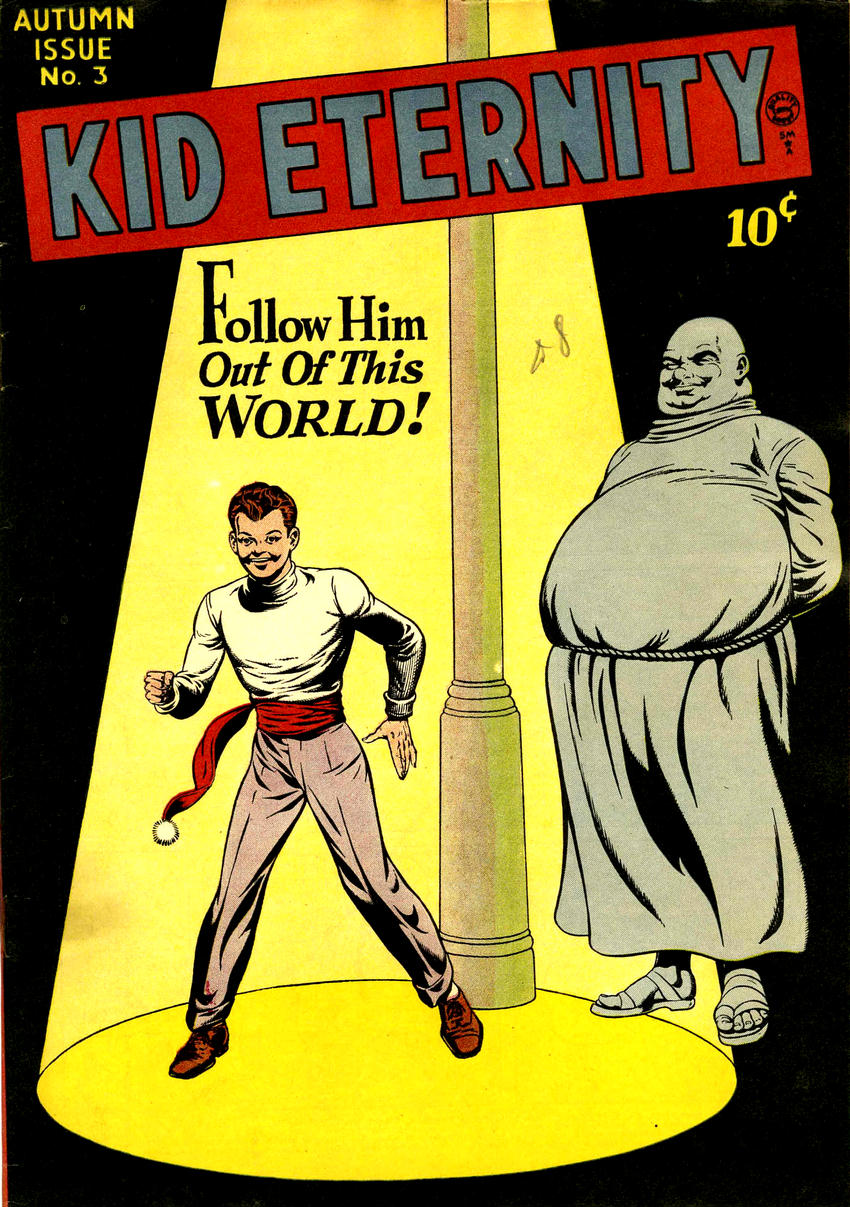 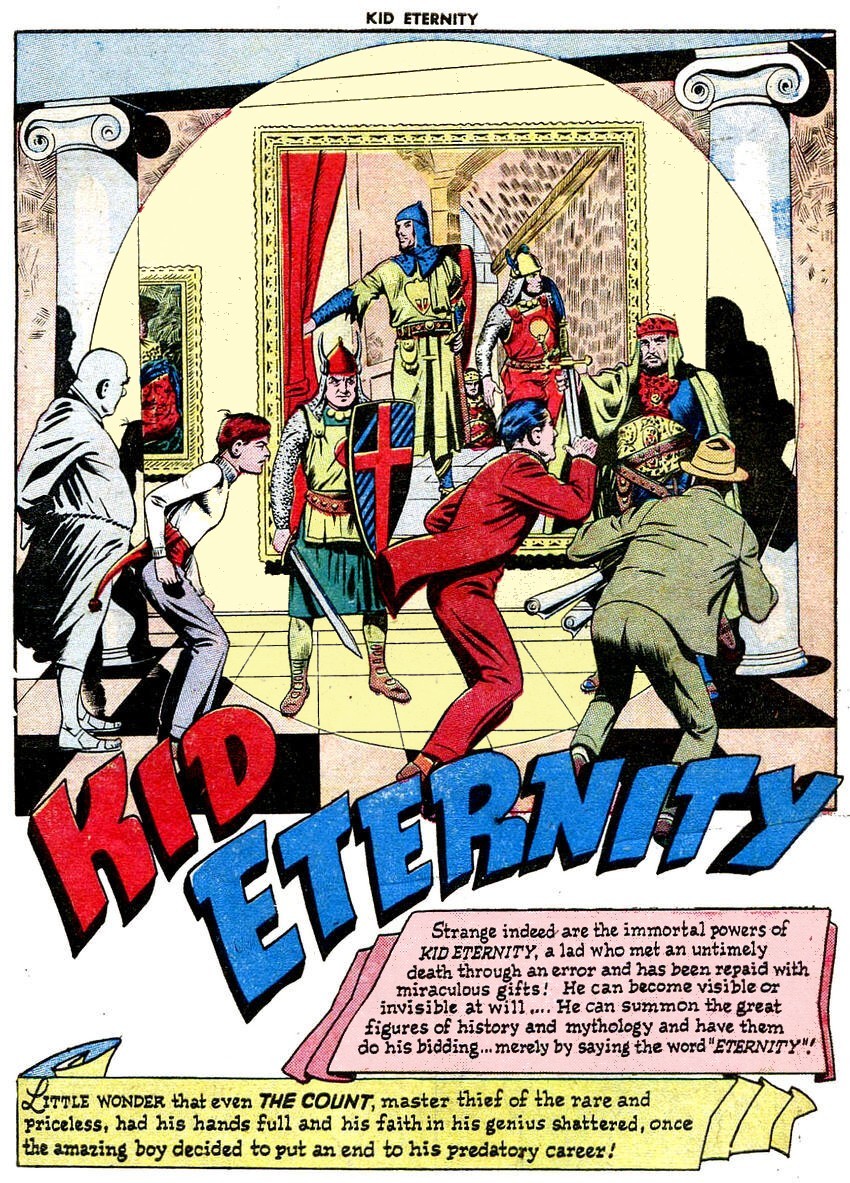 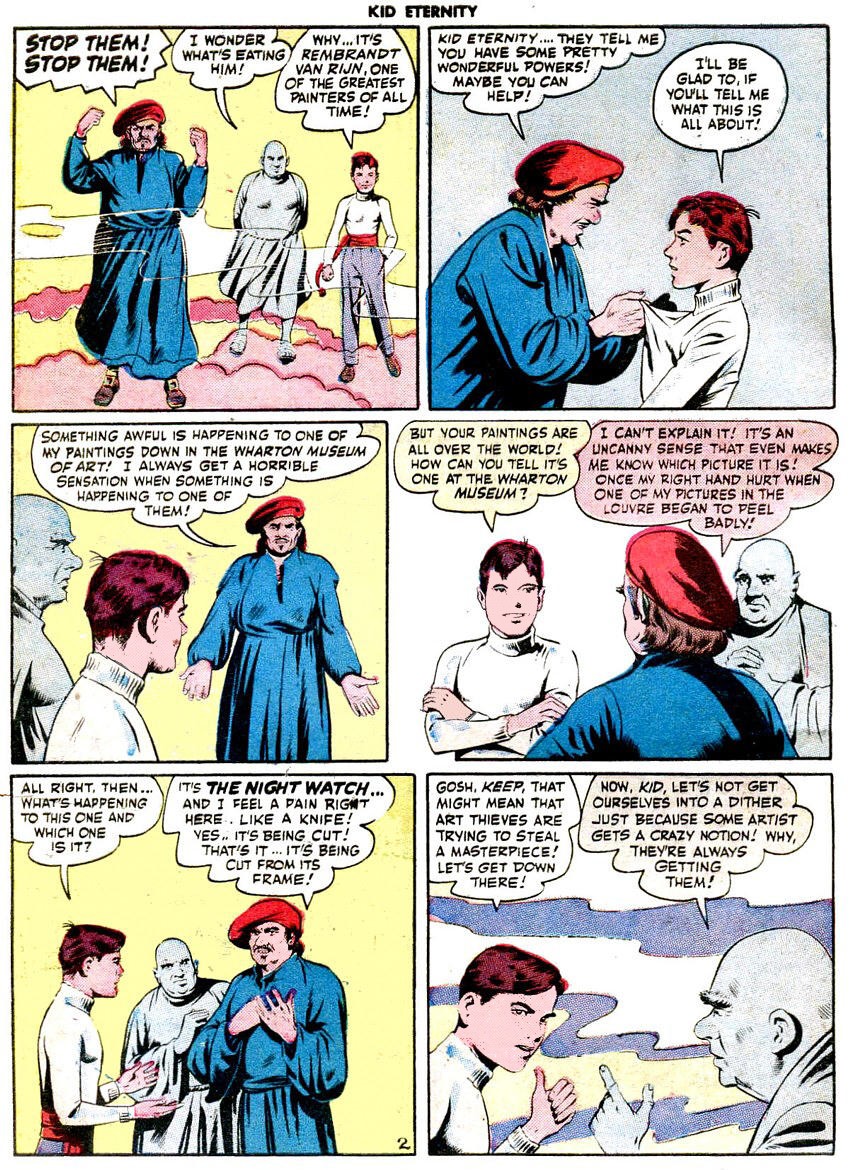 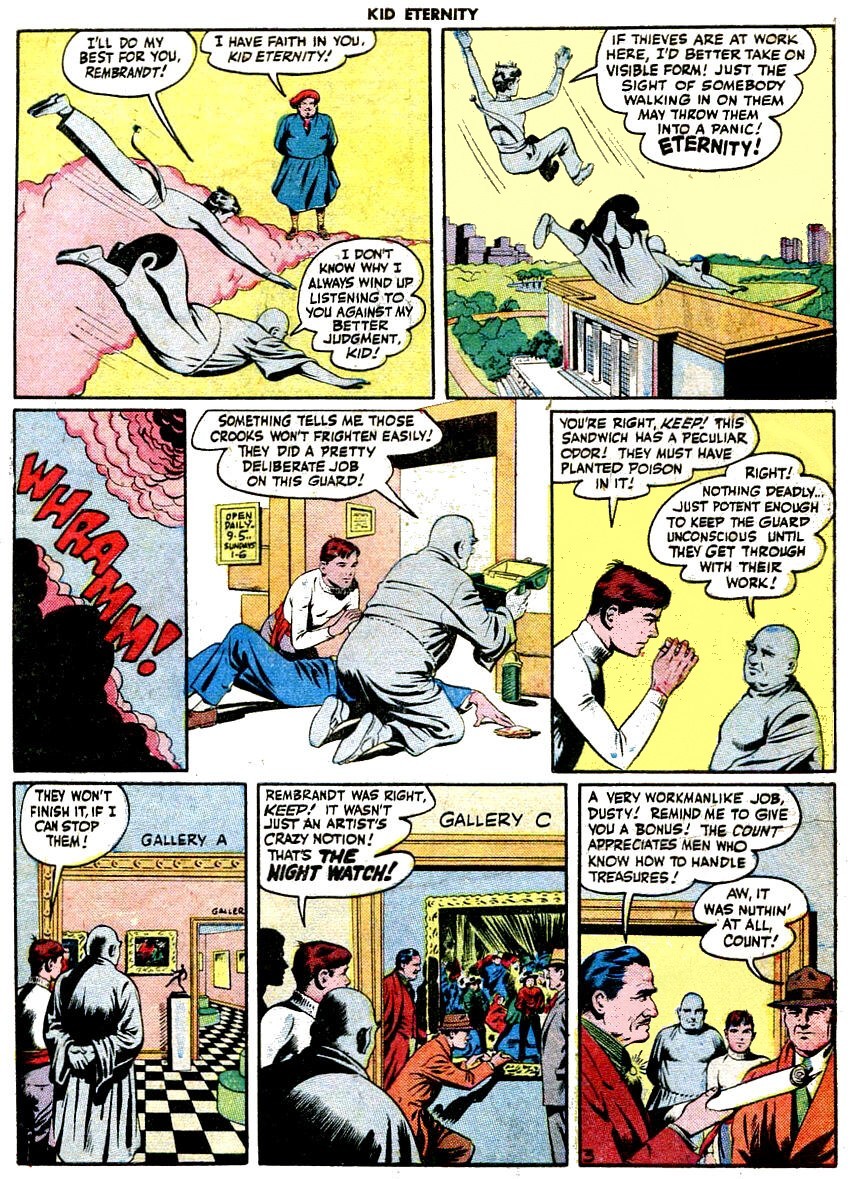 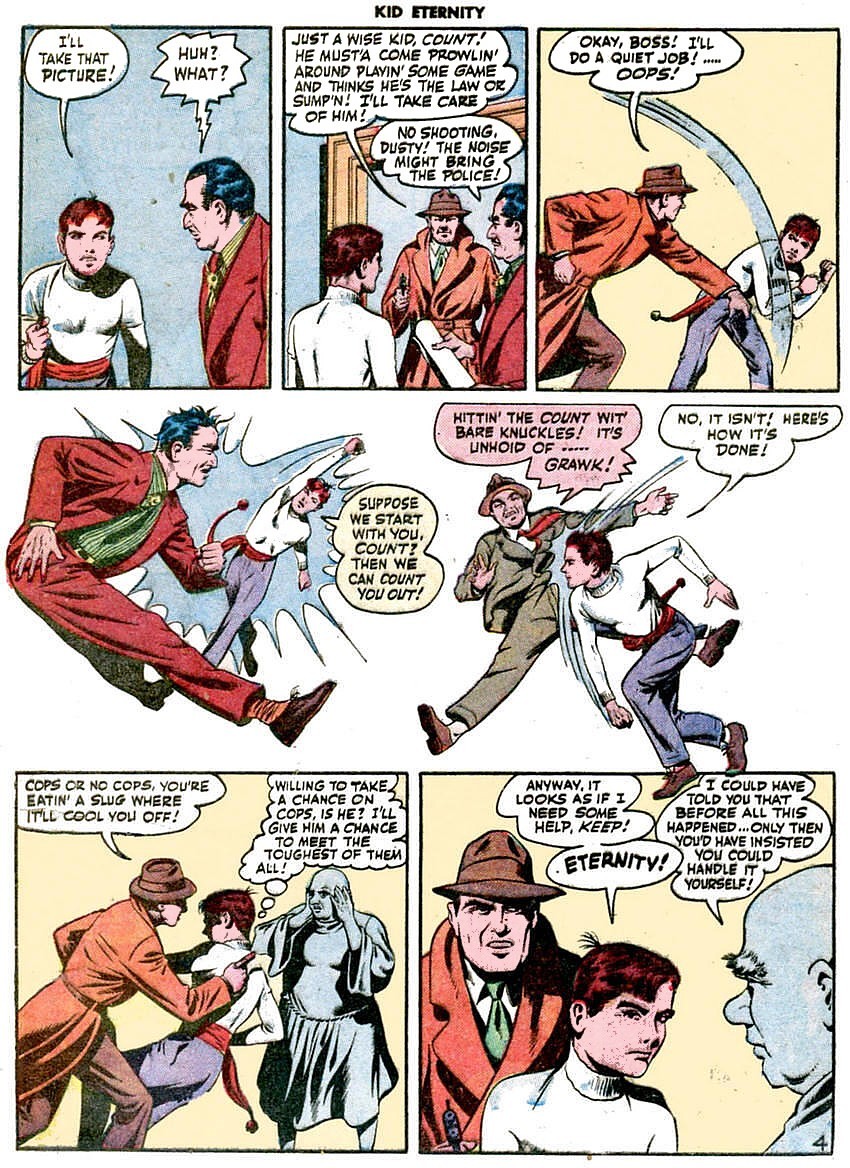 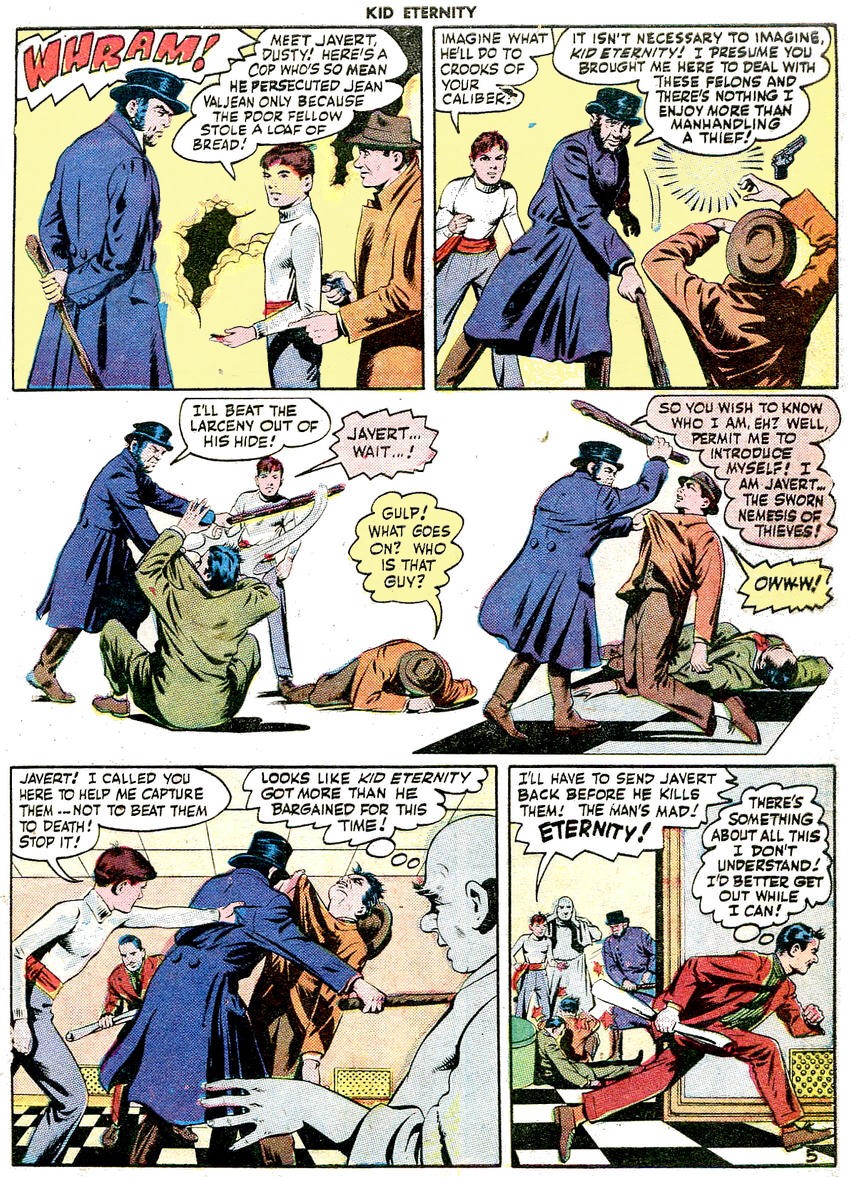 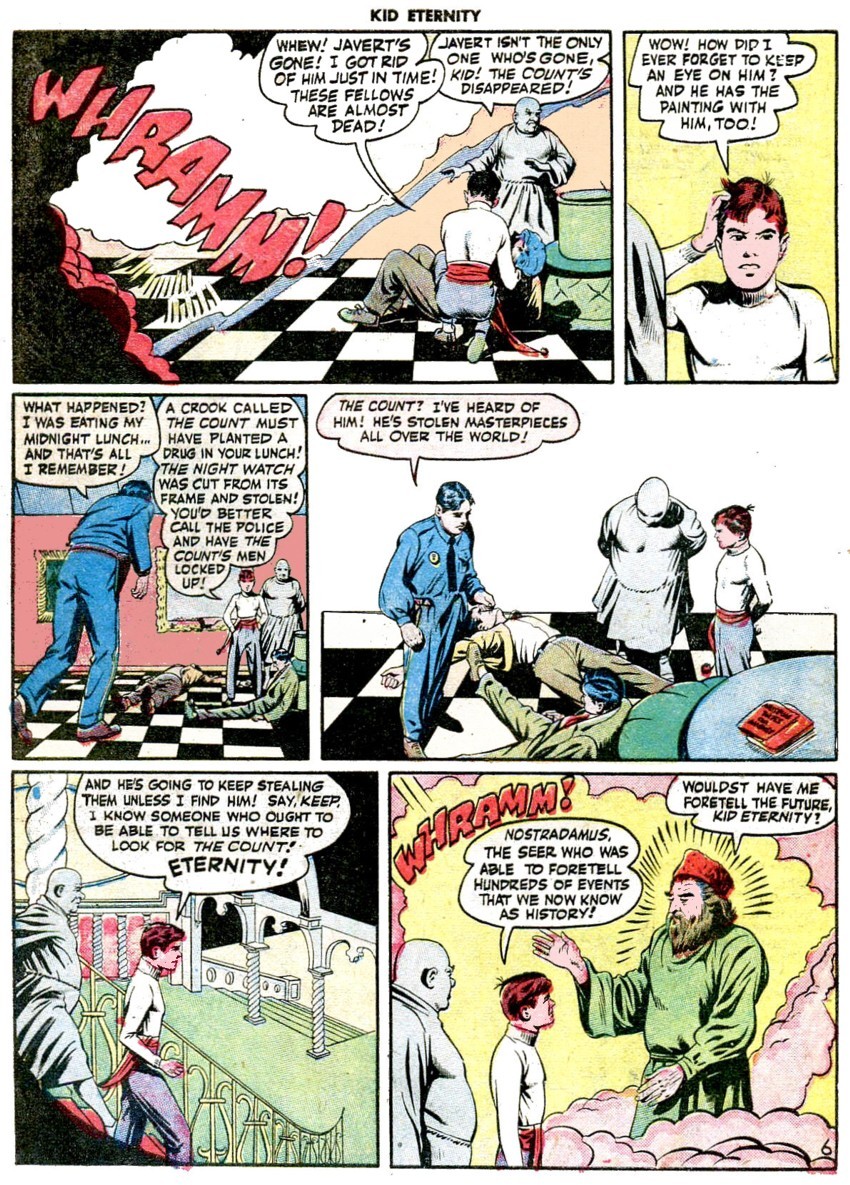 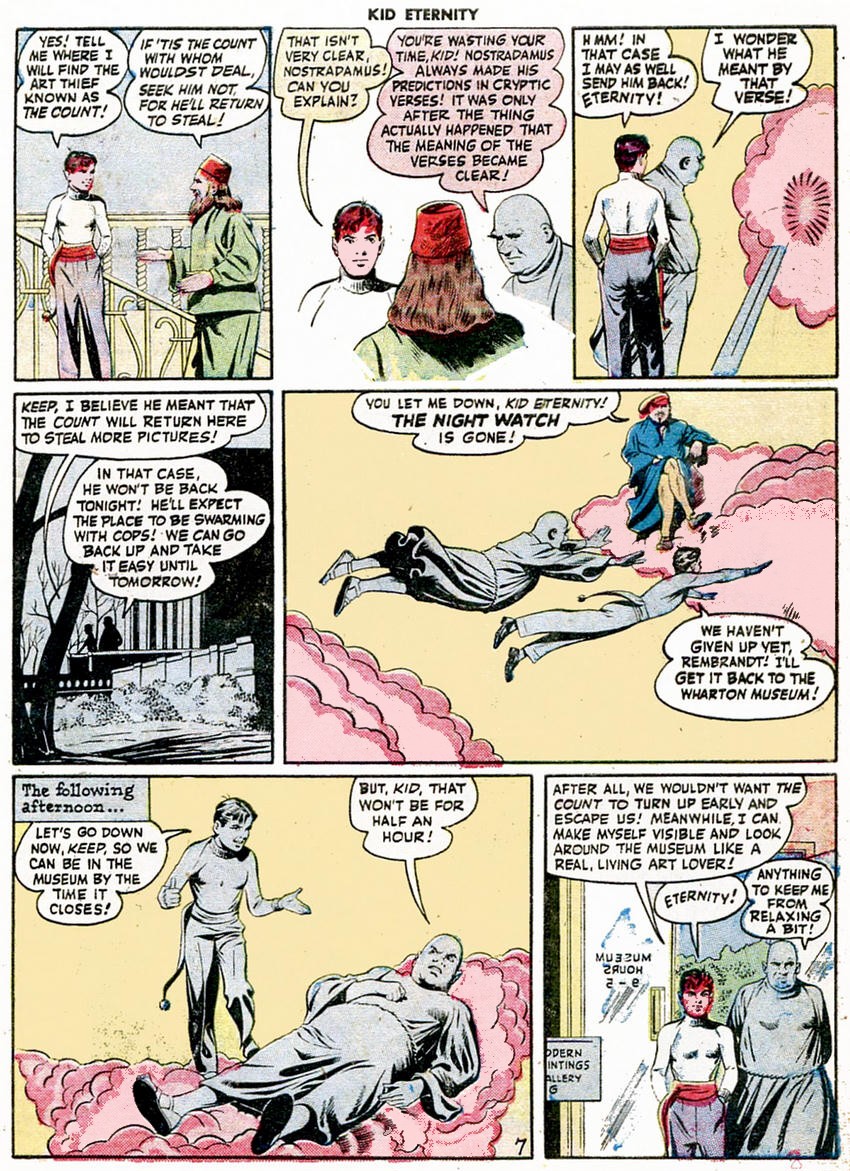 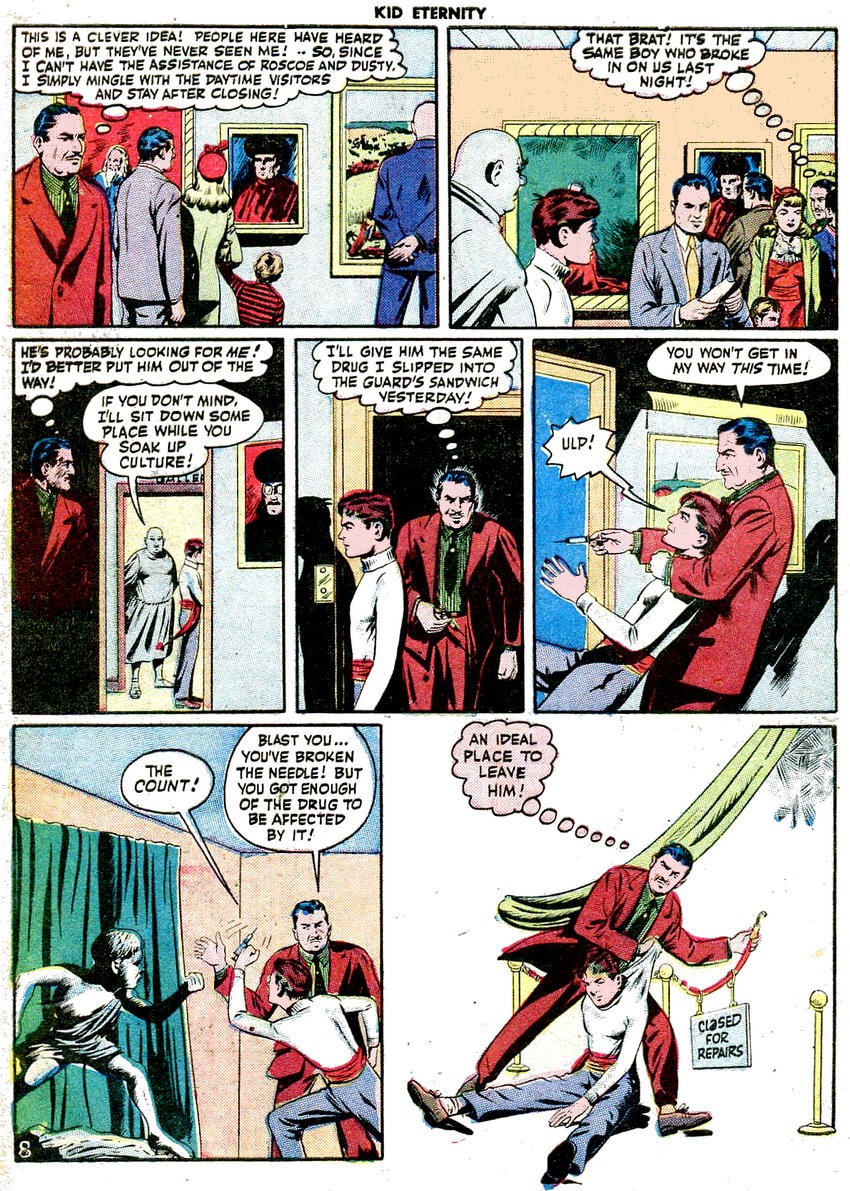 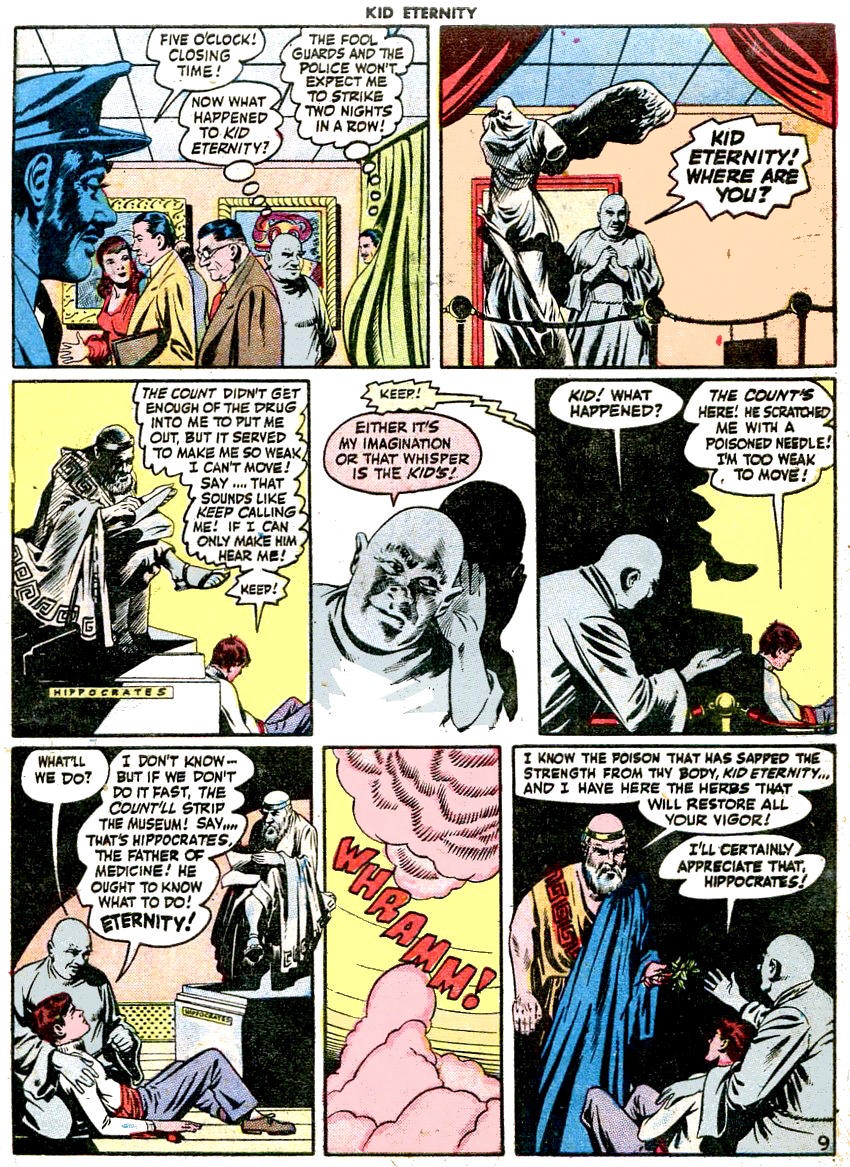 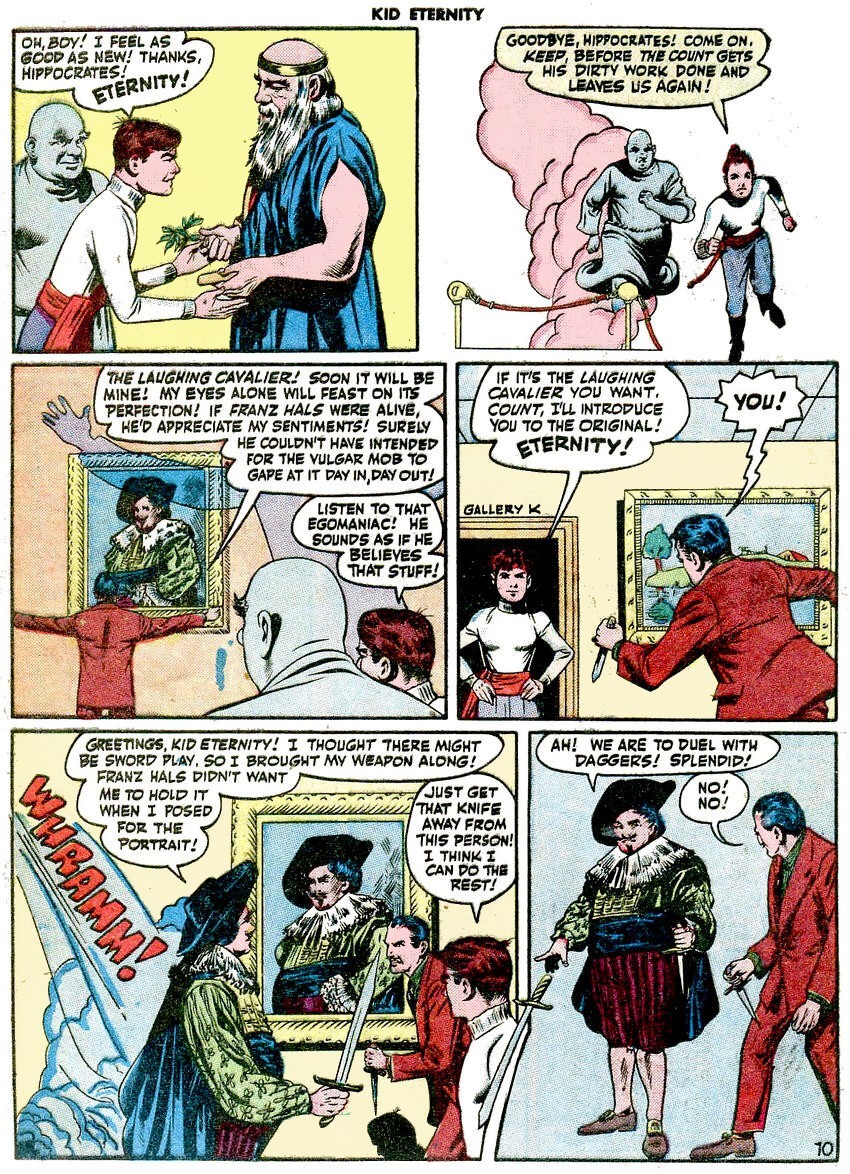 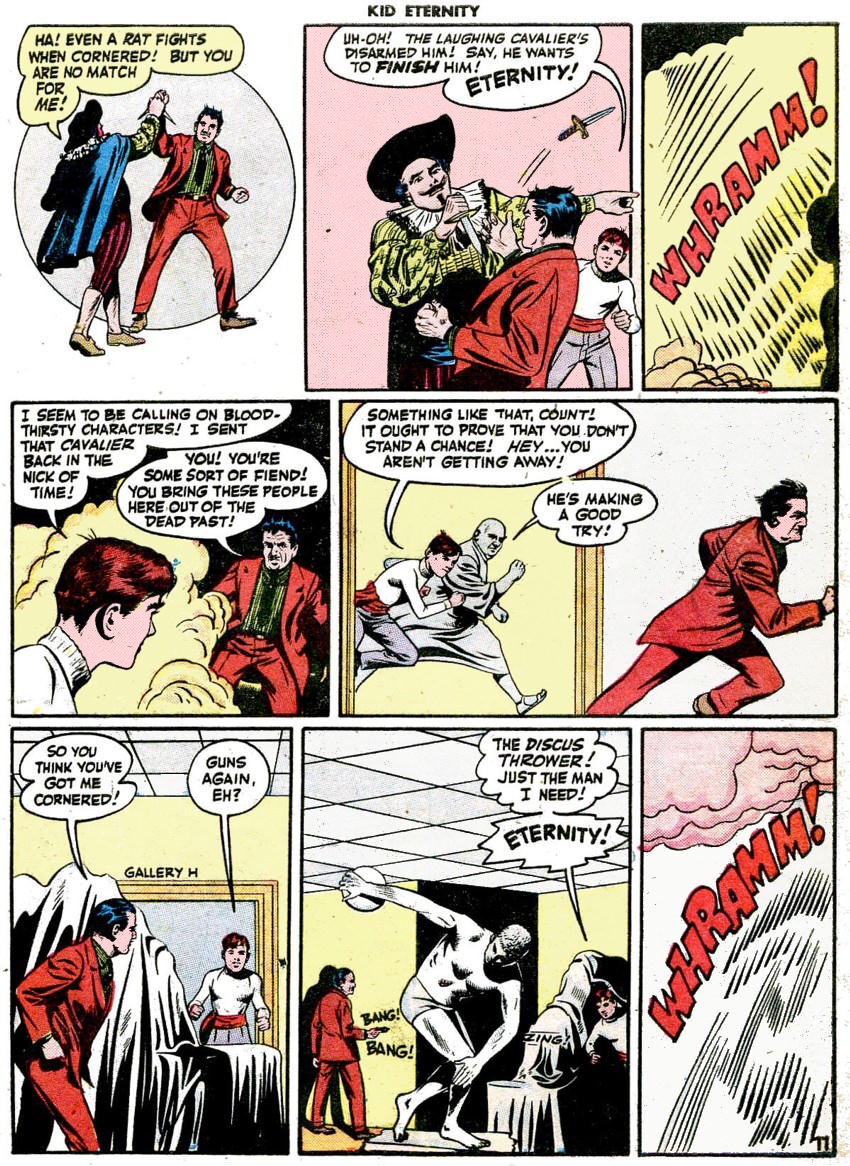 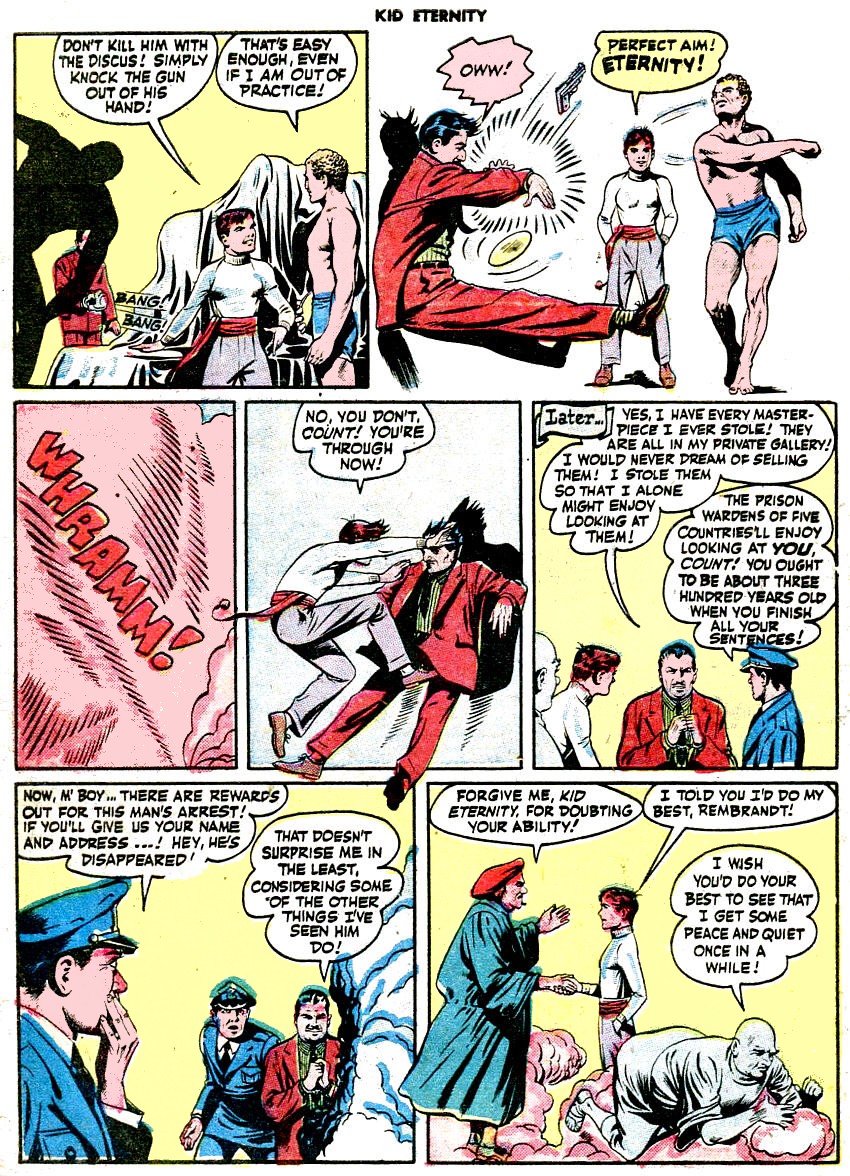 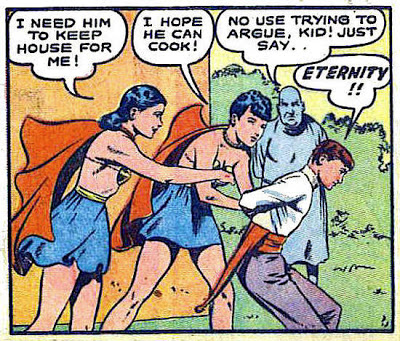 We rilly LUV Kid Eternaty, Pappy, in fact we wana do a story w/us & him sumtime. He's pubic domain so he worx FREE Yay! Deb s a huge fan of him. OMG speakering of fans, me & Lucy got ovar 500 LIKES frm our fans 4 our new bikini pic on facebook yo! Axe ur wife if its OK 4 u 2C: ALICIA & LUCY BIKINI PIC XOXOXOXO Pappy wuld U want 2B on our radio podcast getting intervued by me & Debbie & Lucy? My email is AliciaAmerican@gmail.com XOXOXOXO We luv u Pappity XOXOXOXOXO

Kid Eternity works free because he's dead, dears...if you can get in touch with him good luck!

I think I "sound" better in print than in person. You would be disappointed to talk to me because I can't hear.
Conversations with me are usually me saying, "Can you say that again?" Or, "Sorry, I didn't hear that. Please repeat the question."

Well weR cartunes so we dont do anything live LOL. Well if u want we can write questions & u or ur wife can answer & record answers.
OR.... we can intervu u by email 4 our blog? Like a print intervu? That wont reach as meny peeps but it culd stil B fun. We luv u Pappy! XOXOXOXOXOXO