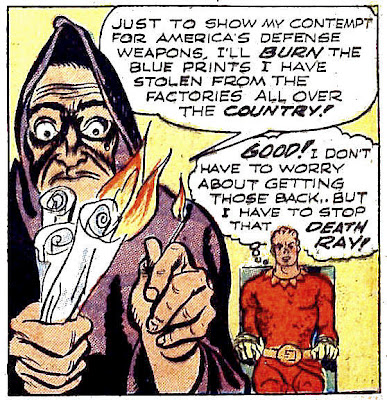 Our third day of Pappy's “War is hell on the homefront week” takes us from England to the United States. Young, weak, bullied Arthur Lake, son of an American aircraft manufacturer, is visiting that country with his dad, when he stumbles into a cave and discovers — ta da! — King Arthur’s sword embedded in stone. Arthur pulls it out and becomes the Sword. Not King Arthur. In 1942 in comics, superheroes, not a king, were the thing. As with our other stories this week, sabotage is what our hero is out to stop.

This is from the one-and-only issue of Ace Publications’ Captain Courageous, #6. The Sword went on in Super-Mystery Comics for a time. My observation on such characters who go instantly from boys to men is that they were to appeal to youngsters who with a bit of magic could become all those things they weren't, big and strong. That would include having maturity, also, I assume. It’s a great fantasy. I say maturity because at the end of the story Arthur decides he can’t be the Sword all the time. And why not? Well, he doesn't say it, but for one thing he’d have to get a job. That takes a certain amount of maturity to know that is a whole other thing from being a superhero. Had I those powers when I was young Arthur's age the temptation for me would be to stay that big man and tell my mom, “No, Ma, I won’t eat broccoli. What are you gonna do about it?” or, “Go to bed? How are you gonna make me?” 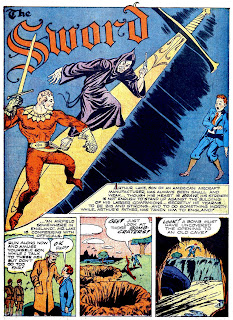 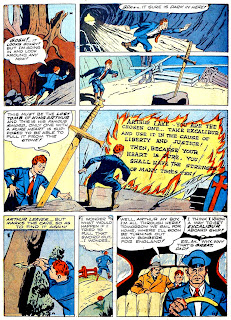 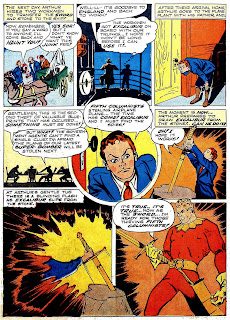 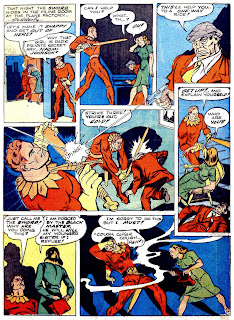 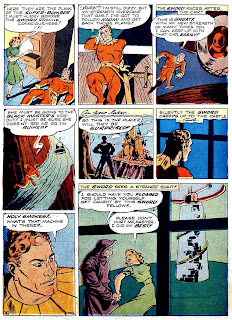 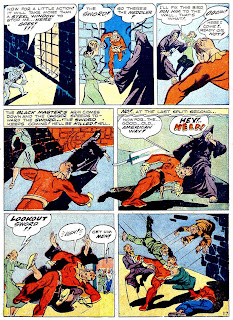 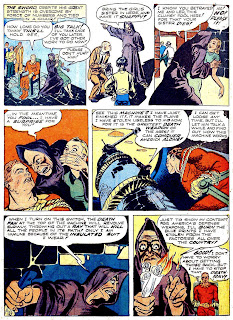 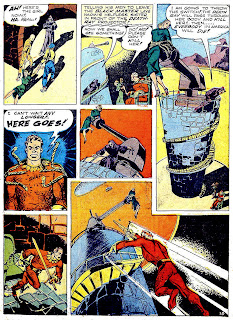 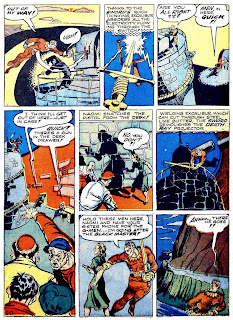 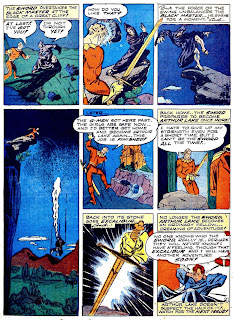 He should be in a Blondie comic book.

I see some parallels here with Marvel's Thor — a physically inefficacious protagonist transformed by the mythological artefact found in a cave.

Daniel, you could say that the template for mythology had been set for millenia. The writer of the Sword story had the Arthurian legend to go by, Marvel had all that mythology passed down for generations to use as springboards.

Kirk, I had to do a little research to see what you meant.

I'm sure that was stuck in the back of my mind somewhere (I did watch Blondie movies many years ago when they were shown on TV), but I had forgotten. Thanks for the note.

Indeed, but, things narrow at least somewhat with this use of a cave, and I don't know of a classic mythology in which a series of heroes are transformed by a single artifact. Further, here the names of the inefficacious personæ (“Lake” and “Blake”) are quite similar.

With respect to the latter, I note that Stan Lee wasn't given to inspired naming. His names were alliterations, reuses, or minimal recyclings, as with “Plastic Man” → “Man Plastic” → “Fantastic”.