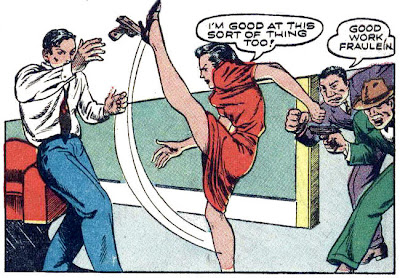 This is the second entry in our "War is hell on the homefront" week, with war stories published in 1942, America's first full year of World War II.

Sabotage was a big concern during the war,* and counter-espionage would have been less of a problem had Nazi spies and saboteurs been as easy to catch as they are in these stories from Jumbo Comics #41. These are short comic book tales and need quick resolution, so coincidence and confessions extorted by force speed them up.

Lightning, not to be confused with Ace Comics' Lash (né Flash) Lightning, made his final appearance in this story. He had begun his career in Jumbo #14. It helps to get a spy to talk if he can be zapped by electricity shooting from fingertips. Today some zealous interrogator might use a stun-gun or a Taser, but Lightning had the innate ability. No waterboarding necessary for this spy to give up the sinister plans. The story, credited to “Teller Tayles” (groan) is drawn by main Sheena artist Robert H. Webb, according to the Grand Comics Database. ZX-5 was a long-time continuing feature in Jumbo. This particular episode, with its sexy enemy agent, is credited by the GCD to Mort Leav, with a guess that the inking may be by Al Bryant. 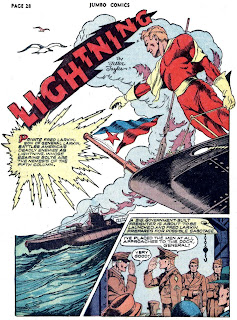 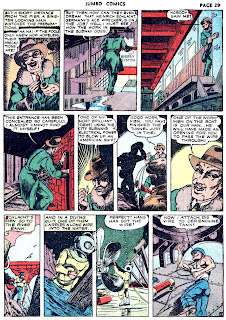 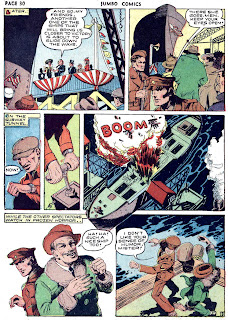 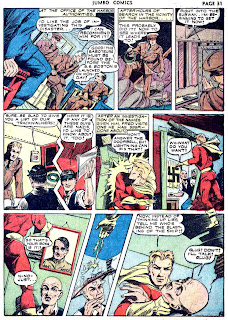 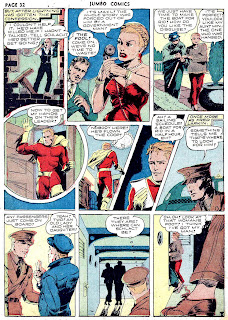 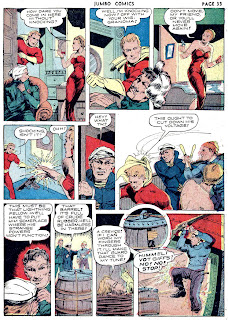 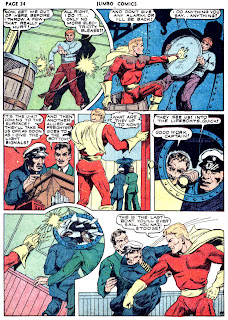 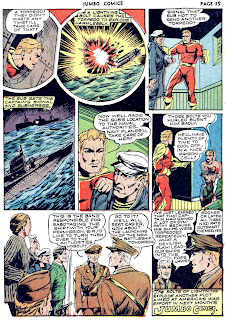 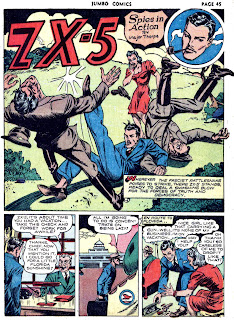 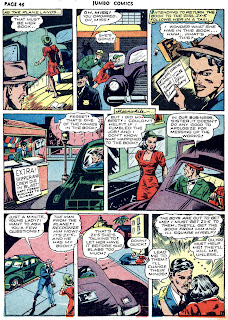 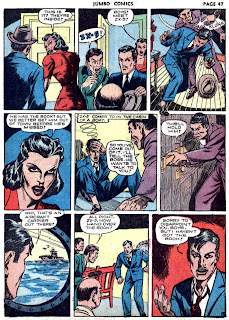 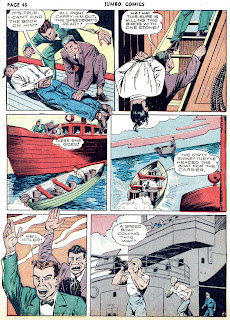 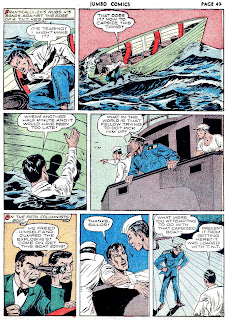 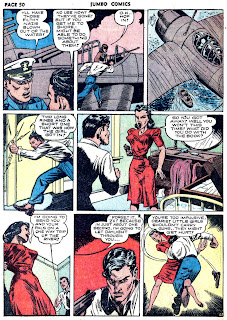 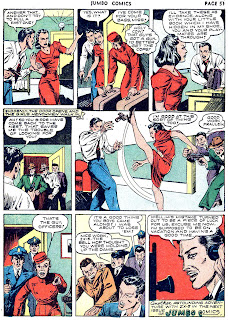 *And what’s changed in 71 years? It’s still a major concern, and billions are spent every year to prevent it.
Posted by Pappy at 12:01 AM

Normally, these aren't accurate depictions of real events, but aside from actually blowing up a ship, these spies were about as bumbling as the real Nazi spies, most of whom just got to America and then fooled around and never got to blowing anything up.

Small piece of advice: If you are a spy, maybe leave the swastika curtains in Germany!

The artist in the second story was bad at female faces, but good at headlights. That's a pretty uneven art education!

I laughed aloud at the seventh panel of the second page of the first story. The tendency of comic books to have characters narrate is one thing; to have the villain give the reader a knowing look is another! (Of course, that sort of thing happened fairly often in funny-animals stories.)

Anyway, I quite enjoyed look of the first story, and at least the inking of the second story.
__________

During WWII, the British policy was to "turn" the German agents whom they caught, and doing this allowed them to catch pretty much all the others, and to use the lot of them to feed misleading reports back to Germany.

Roosevelt proceeded very differently; he demanded that any agents found should be electrocuted. He didn't get that much in all cases, but German agents who tried to turn were rebuffed. So catching agents was made unnecessarily difficult.

Daniel and Brian, the FBI website gives a pretty good accounting of German spies brought to the East coast of the U.S. in 1942 by submarine at:
http://www.fbi.gov/about-us/history/famous-cases/nazi-saboteurs

As Daniel mentioned, the U.S. policy was to execute, and all but two of the spies were put to death; the other two had their sentences commuted after the war, and they were deported.

The last paragraph of the story is interesting:

"Although many allegations of sabotage were investigated by the FBI during World War II, not one instance was found of enemy-inspired sabotage. Every suspect act traced to its source was the result of vandalism, pique, resentment, a desire for relief from boredom, the curiosity of children 'to see what would happen,' or other personal motive."

Alicia, I don't know what color the panties were, or even if the spy was wearing underwear. You will notice that being a gentleman, ZX-5 has averted his eyes to avoid the sight of such immodesty.