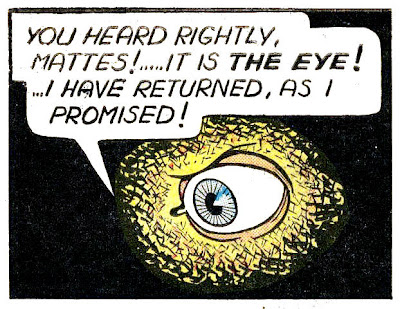 The introduction of the Eye, by Frank Thomas, is our third posting of four in our early superhero/costumed characters comics week. It's the earliest story, having appeared in Keen Detective Funnies Volume 2 Number 4 (whole number 16), published by Centaur in 1939.

Despite inclusion in our theme week, the Eye doesn't really count as a costumed hero, although he could be said to be super. That is, if working miracles is a super power. So what was the Eye? No one knew, because he was never explained. I assume, as do some other comic historians, that the Eye was some sort of comic book version of God. He appeared for a year, until Keen Detective ceased publishing. He appeared in two issues of his own comic, then went wherever old comic book characters, including comic book gods, go.

Thomas did features like “The Owl” and “Billy and Bonny Bee.” He was a talented cartoonist and writer. I've featured him before, the post before this being this past February: Pappy's #1105. 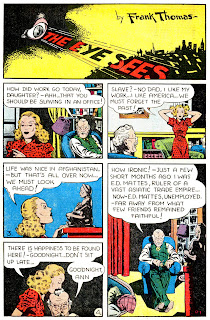 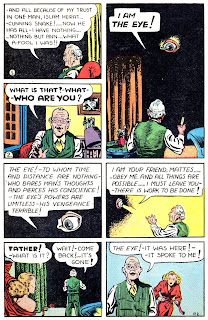 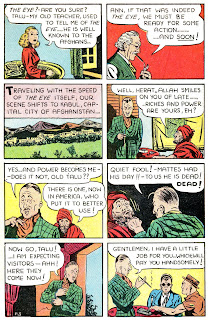 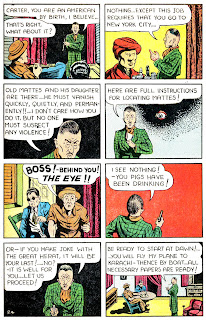 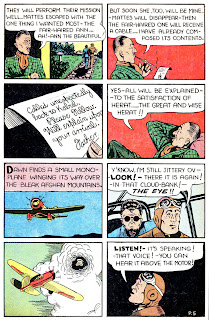 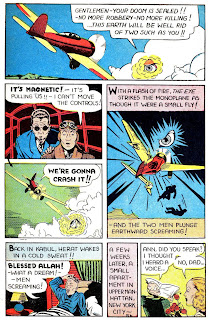 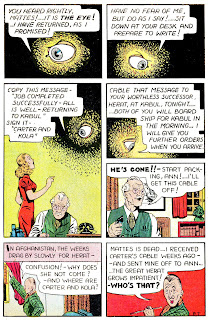 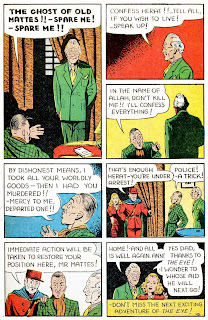 This is reminiscent of Fletcher Hank's Stardust the Super Wizard. All seeing, ill-defined powers, but works in mysterious, jerky, and unnecessarily round-a-bout ways.

The thing will smash a plane (with an eye, ouch!) but then the convoluted admission in front of a police/ghost plot to seal it up. It's a giant eye that can do about anything! The one thing Hanks always had going from him was his crazy sense of ironic justice, which this story doesn't really have.

You get right down to it and many invincible super-heroes are gods, coming out of ancient traditions and myths. But they have alter-egos as humans, which mitigates their godhood some. The Eye just seems more overtly godlike with his mysterious presence and his powers.

I don't know that any writer or artist of the Golden Age could be compared to Fletcher Hanks. That guy was definitely one of a kind.

Huh? Wha—? Oh, sorry! I was distracted by thoughts of Ann as she must have been just before 2:6. There was some kind of … story about … something, wasn't there?

Of course, Thor was a god, and Captain Marvel's SHAZAM was an anocrym of various gods and mythological figures (somewhat contradictorily. I wonder what biblical Solomon would think about being lumped in the same word as Greek god Zeus?)

I recall another character called The Eye, but this was more of a conventional costumed hero who wore an oversized headpiece that made him look vaguely like the CBS logo. He was drawn by Biljo White for self-published comics.

rnigma, you go back a ways. I have a couple of old fanzines with Biljo's "The Eye."