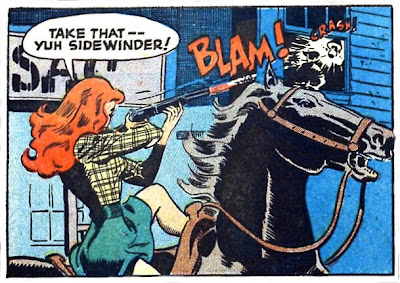 Any Wallace Wood fans in 1951 who just so happened to open Western Crime Busters #7 would be treated to a great splash panel with lots of Wood-style sex appeal. The trick would be in getting them to open the book and see the page. Trojan Magazines, which published Western Crime Busters wasn't known as an artists comic book company. The artwork in their titles is serviceable, without the flash and panache that Wood provided to even a tepid script like this episode of “Six-Gun Smith.”

The Grand Comics Database lists Wood as doing both pencils and inks. I see another hand in this strip. It could be the inking is by Wood collaborator Harry Harrison. 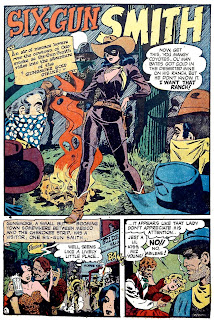 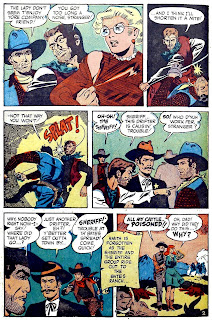 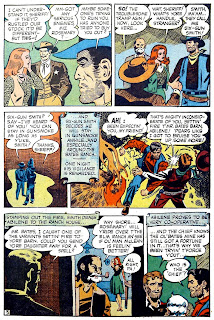 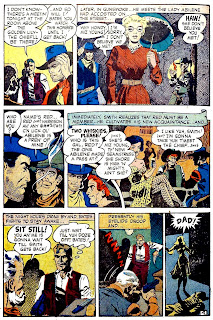 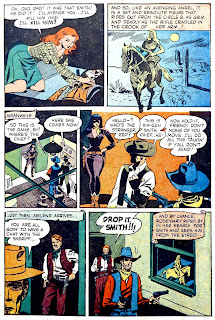 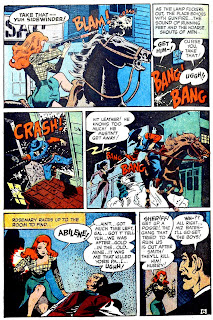 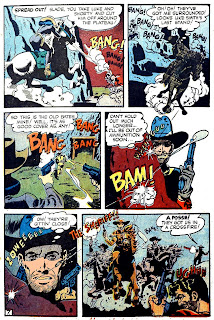 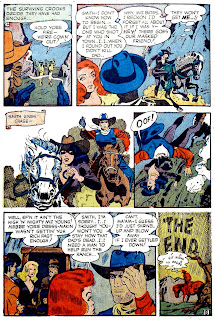 Pappy,
Perhaps I read too many of those Fighting Western pulps, but I suspected that seamstress, Miz Young, all along!

It appears Woody contributed several more stories to this series, so we hopefully can look forward to more "Wood's Wild West."
Thanks!

Hey, Four-Color Kid, I'll head on over to the Pappy Corral to lasso up some more Western comics for yuh. Show up at this here bunkhouse tomorrow (Nov. 16) for some funny Western action...then next week on Wednesday we have a hybrid science fiction Western.

I've only got one Western scheduled for December (the 10th), but it'll have yuh singin' "Yippee Ki Yi Yay!"

Darci, I'll have to check my supply of Western Crime Busters to see what Woody I've got for showing. I don't usually take requests, but shucks, you are so nice I reckon I can mosey on over to the ranch house and at least take a looksee.


Pappy, the GCD lists Woody had two stories in #9 and one in #10. Besides Western Crime Busters, he also did a story in Crime Smashers #5. Those 5 are all they list of Woody's at Trojan Magazines.
Hope this helps!

Darci, I have those stories you list. Wood did varying degrees of work on them. For instance, the story from Crime Smashers #5 is credited to Ken Battefield, although Wood's distinctive inking can be spotted. The story is probably one of those that two or more artists sat up all night working on, trading pages, and got finished in time for a deadline.

I will probably show these stories at some point, unless my fellow bloggers beat me to them!