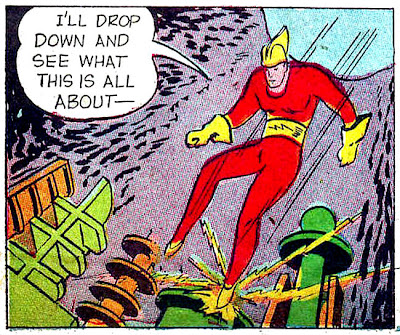 Charles “Shock” Gibson was born in this story from Speed Comics #1 (1939), one of those wildly improbable origins found in superhero comic books. A splash of chemicals, a bolt of lightning, and ZAP! Charles becomes superhero Shock Gibson, the human dynamo.

Shock's colleague, Dr. Blitzer, who witnesses Shock's new abilities, tells him he has “the strength of a thousand men!” Being a clean-cut American scientist of the fair play persuasion, Shock decides to use his powers for good, instead of for bagging chicks (I made up that last part). Anyway, his first adventure, 25 pages worth, moves like the comic book's title promises. Shock chases villains who are in an airplane, bounding his way across America to the Rocky Mountains. There he encounters a mad scientist. The scientist produces some zombies, but such zombies as you and I have not before seen.

I've mentioned before how the standards for comic book artwork changed rapidly from these early days, after the field exploded in popularity in the wake of Superman's success. A few years later Shock joined the military and was fighting the Japanese, and had artwork much elevated from his origin. Tomorrow I'll show you a story where Shock has a different costume (no sharkfin helmet, but an added mask), and the advantage of art by the terrific Bob Fujitani. 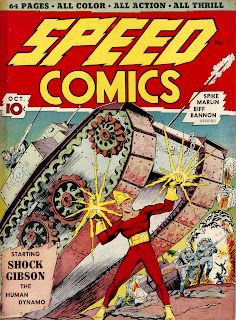 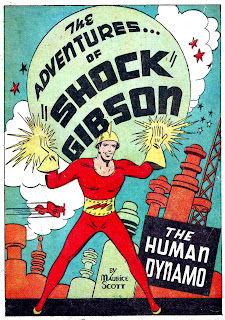 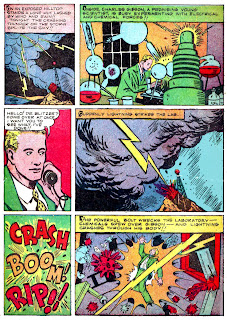 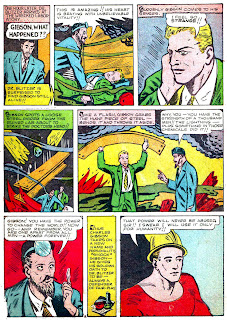 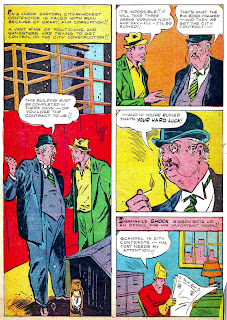 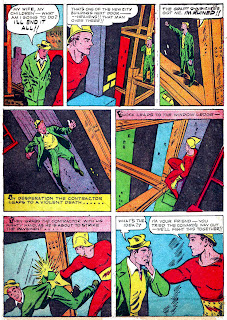 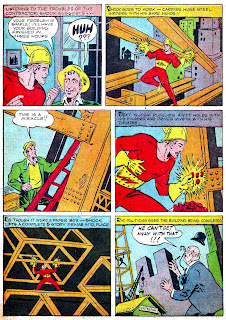 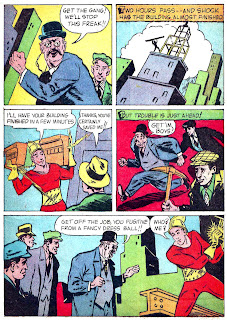 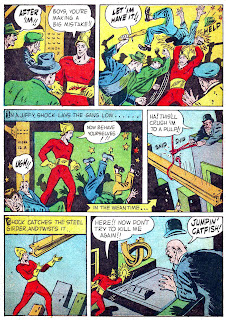 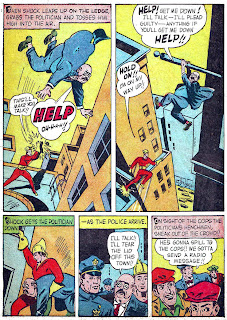 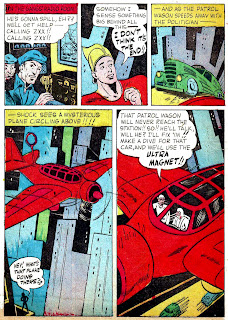 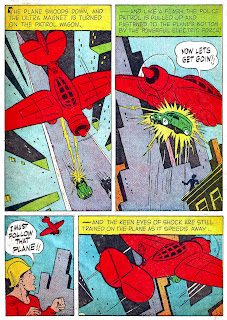 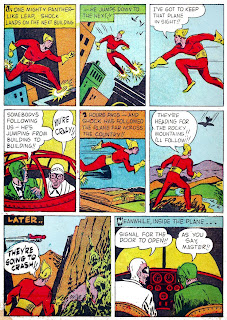 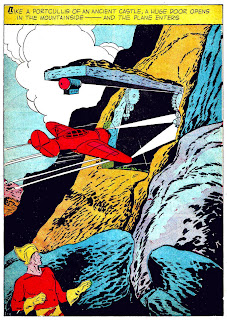 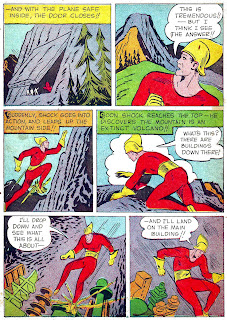 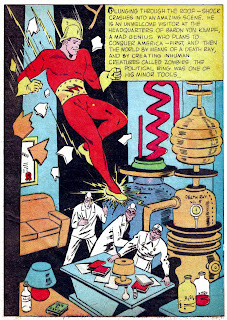 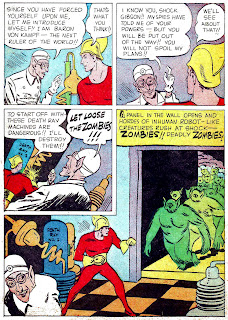 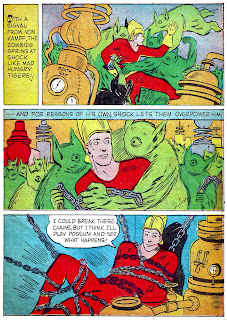 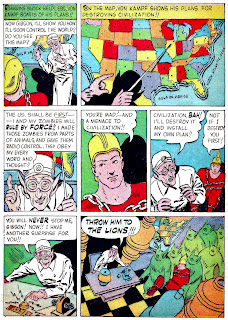 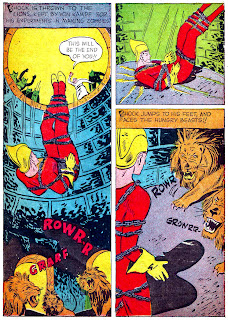 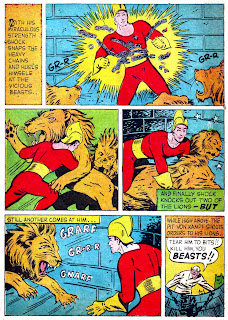 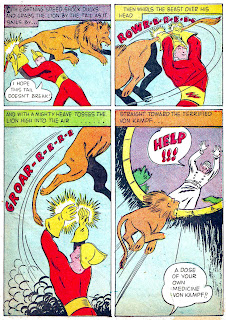 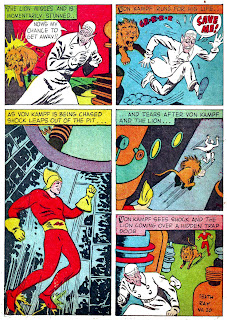 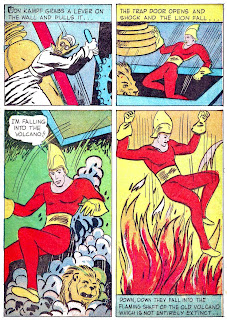 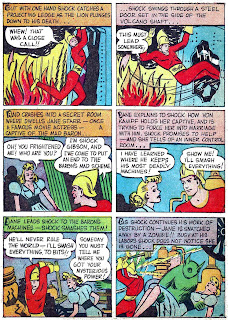 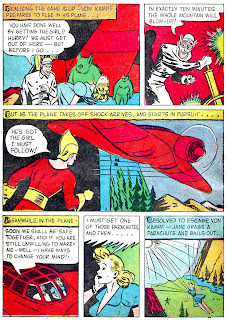 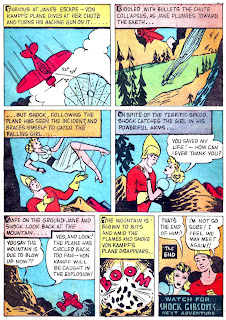 Oh Pappy, that was a riot. Are all the older Shock Gibson stories like this one? I would read a whole book of these. The zombie button? A copy of Death by Rays nonchalantly displayed on the shelf? That gorgeous frame where the plane flies into the mountain (and the last vestiges of the first half of the story just disappear right along with the car they're flying around in)? This is solid gold, man. It's like Fletcher Hanks without the rage.

I guess that it was just too bad for the officer or officers in the hijacked patrol car.

Another thing that one notices about the early superhero comic books is how often they are written about a world that is chaotic and lawless on most levels.

Mr. Cavin, what the structure of the story reminds me of is the episodic nature of the earliest Superman stories, which were written for newspaper continuity (and none too well, at that). My guess is the editor told the writer he wanted a certain number of pages and he filled them without letting up on the breakneck speed by explaining much (like how such a major construction job on a mountain could be done without someone noticing).

Good catch on things like the Death by Rays book. I missed that. I wonder if that book was written by Nicola Tesla.

Daniel, a lawless and chaotic world leaves more for a vigilante superhero to do. And without getting into an essay on pre-World War II America, many of the comic book creators were raised in immigrant communities in New York City. They were on their own when it came to protecting what was theirs (not trusting police, and probably for good reason). The country might have looked to them the way the stories were written.

Your explanation is very plausible; but it would mean then that the lack of a social infrastructure had undermined a belief in law more generally. The physical universe itself is presented as rather arbitrary. And, in some stories, demonic forces (even Lucifer or Death) decide to duke it out with Our Hero in what had seemed to begin as tales of adventure or of science fiction.

Daniel, as usual you've come up with an interesting point. I can't guess any fiction writer's personal beliefs, or whether they believe the physical universe is “rather arbitrary.” Since many people believe in supernatural forces (invisible entities, either good or evil) it doesn't seem unusual that those beliefs would be thrown into the fictional mix of a superhero story.