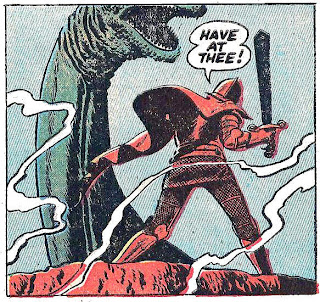 The Search For Bridey Murphy by Morey Bernstein was a popular best seller in the mid-1950s. A woman was put under hypnosis and told a tale of a past life. Her story turned out after investigation to be a fantasy and not reality. But it caught the public's imagination. As my father, Big Pappy, put it, after one lifetime why the hell would you want to do it all over again? 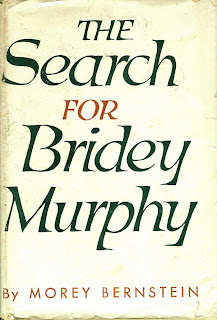 My copy of the original printing of the book.

This story from Adventures Into the Unknown is a past-life fantasy taken to extremes for the purposes of storytelling. It's wacky in that special ACG way of wackiness, but it's also fun because of Ogden Whitney's artwork. It was written by ACG editor Richard E. Hughes.

Wouldn't it be great to have all of life's mysteries wrapped up in the end with irrefutable proof that they occurred? That's how “The Many Lives of Mark Martin” ends. Even as fiction it stretched its finish to absurd lengths. But it's a comic book, and unlike real life (or even a fantasy life), mysteries of the paranormal in comic books are easily resolved. 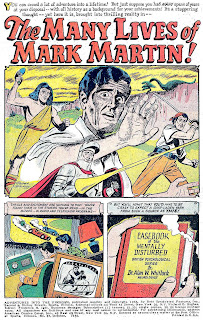 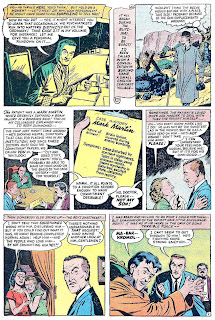 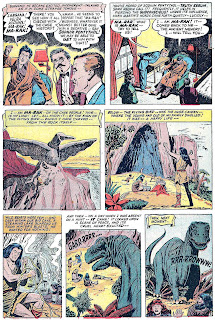 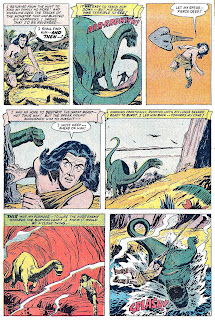 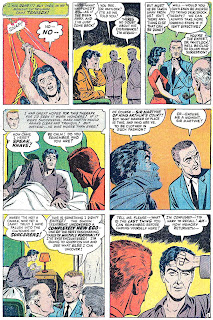 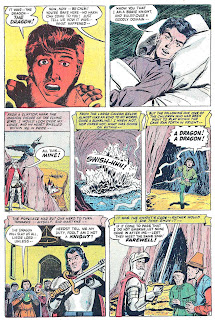 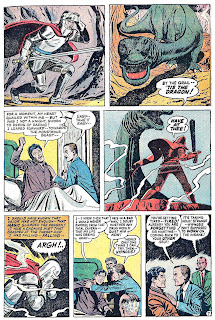 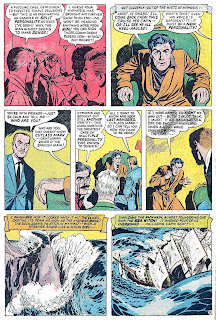 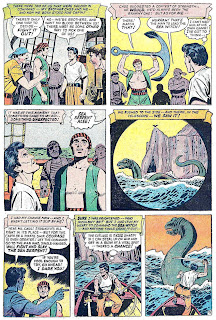 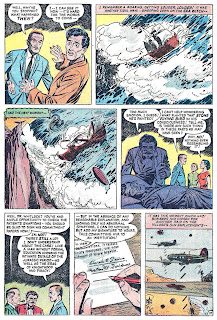 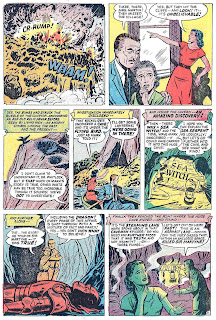 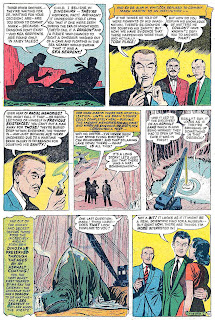 **********
I found this editorial page from the same issue interesting. Are the letters real? If they are then I suspect Herman Kornbluth, asking for ghost, vampire and werewolf stories, must've been living in some sort of bubble, having not heard about controversies over horror comics or the Comics Code. To answer my own question, neither of the letters by “Kornbluth” or “Conrad Haas,” sound real. They read more like editor Hughes composed them to make a point about the superiority of the new stories over the old. We found out years ago that Hughes used a variety of pen-names to fool readers into thinking there was more than one writer on staff. It's not impossible to believe he'd do the same thing with letters to the editor.

I don't know about Kornbluth or Haas, but I know I'm real. A few years later some letters I sent to ACG comics were published in various issues. So those letter pages were legitimate, at least. 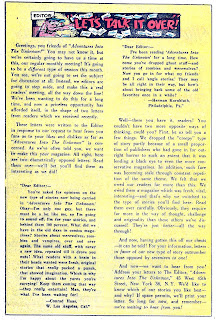 This was also the inspiration for Roger Corman's "The Undead", with the beautiful Allison Hayes as an evil witch. This was probably right in Pappy's formative years, so if he saw it, I'm sure he'll remember her :)

That movie was much better with MST3K involved!

This story has some editing problems. Are they trying to say the dinosaur (wrong type) died with the caveman, and people only *thought* it's preserved body was attacking (how did it get back into the tar?) Or that it survived all that time and feel into the tar? Either scenario is silly!

Brian, I've missed out; I haven't seen Corman's The Undead, not even on Mystery Science Theater, but thanks for making the connection.

As far as silly scenarios, well, of course the whole thing is silly, which makes it all the more fun.

As for the Bridey Murphy book, Cecil Adams debunked it years ago in one of his Straight Dope columns, and he received a rather angry reply from Morey Bernstein himself: "Someone was good enough to send me your piece of bovine excrement (a euphemism for plain old bulls--t) on Bridey Murphy. Straight Dope, eh? Dopey, yes. Straight? Like a corkscrew. How the hell could you be such an idiot (or so badly informed)?"
http://www.straightdope.com/columns/read/522/is-it-possible-to-recall-past-lives-through-hypnosis

Anyway, on a weird tangent, I saw the name Mark Martin in the story and thought of the NASCAR driver of that name; similarly, when I see ACG's later "Magic Agent" stories with their hero John Force, I think of the drag racer.

I have just found your fine blog.I am a sixty year old fan of comics before nineteen seventy(or so),especially those of the late fifties thru the sixties.Do not like horror per se,but love the code approved ACG stuff.Wonder if you can help me.It is so hard to find ACGs in comic shops,and it looks like I will never find the story I read in third grade,and that made me love comics-unless you have it.It is about a magician from a magic race who lives on a cloud.He falls in love with a human woman,and gets himself exiled to marry her.Trouble is,without his magic,he knows nothing.The last page I recall has him in a jewelry store,trying to use his broken magic wand to buy something for his girl,when the cops are called.Somehow,he learns how to be human,and get the girl.Sound familiar? Any chance you could put this onto your blog,so I could finally read this story again? I have been trying to find it for fifty plus years.Cheryl Spoehr

Cheryl, I often get requests to identify stories and issues they appeared in and my track record is zero. I have never been able to find what someone is looking for. Pretty pathetic, I'd say, considering I'm supposed to have some expertise.

I have an extensive collection of ACG comics but that story doesn't sound familiar.

My recommendation is for you to go to Digital Comics Museum or Comic Book Plus. They have extensive scans of complete issues of ACG Comics (among thousands of others). Since you say you were in third grade you'd have been about eight, so look for issues published in the early '60s of ACG's supernatural comics. Good luck!