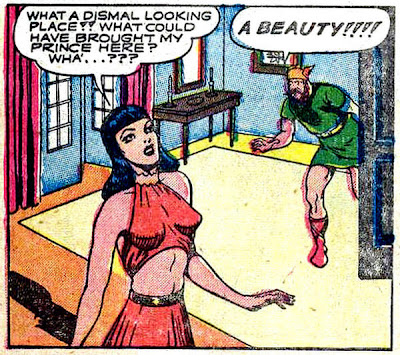 Fawcett licensed their comics for publication in other countries, including the UK. This story comes from an issue of Captain Midnight, #100 to the British, but reprinted from the American Captain Midnight #50 (1947). I like the crisp black line printing, which I prefer to the usual sloppy Fawcett print jobs (see Monday's posting for a couple of good examples).

I know little about the character. I know Captain Midnight was an aviator, a popular radio programme (spelling in honor of our British cousins-in-comics), and later a TV show, with reruns retitled Jet Jackson. According to some things I've read, the comic book version was different than the mainstream version. Someone with more familiarity with the character will probably have to confirm that.

The story is credited to William Woolfolk for the script, and Leonard Frank for the artwork. 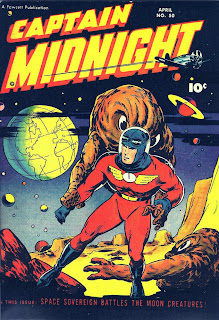 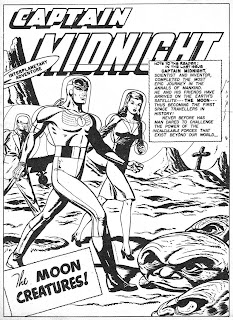 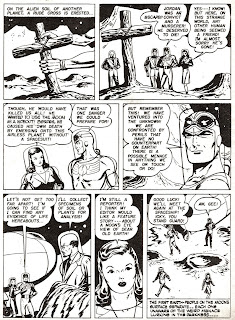 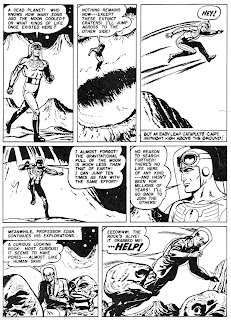 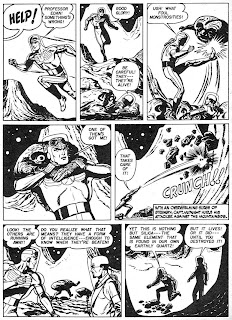 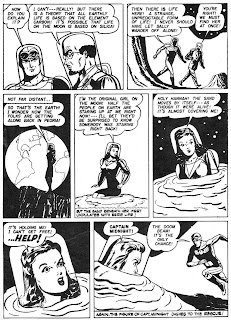 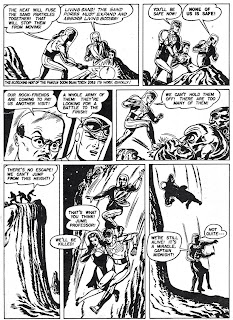 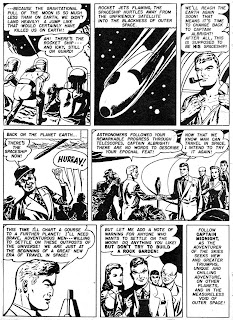 When Fawcett folded their comic book line in 1953 — a combination of losing the lawsuit brought by DC for copyright infringement on Superman by Captain Marvel, and too many comic book titles flooding the stands — they sold some of their titles and non-Marvel characters to others. This story is the first issue of Danger and Adventure #22 (1954), actually #1, but continued from This Magazine is Haunted. Charlton, who bought the rights, published an Ibis the Invincible as well as Nyoka the Jungle Girl story in this issue. It was the only Ibis story reprinted by Charlton in this title, which lasted another few issues before being cancelled. I don't know If they continued Ibis somewhere else, or just left him standing with his Ibistick in his hand.

“The Viking Horde” is an old story, reprinted from Whiz Comics #45 (1943), identified by the GCD as being drawn by old-timer Alex Blum, although probably in collaboration with an unknown inker. 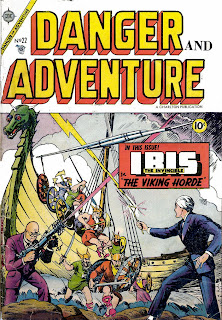 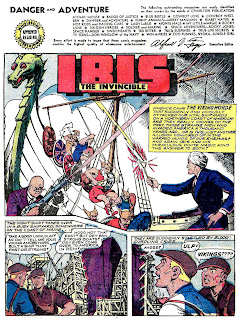 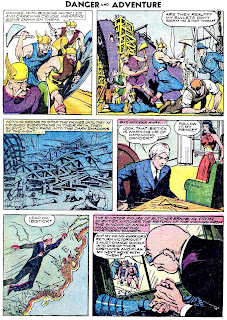 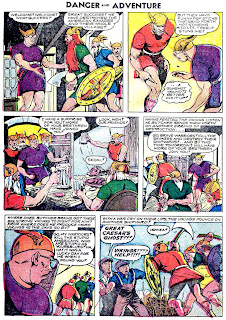 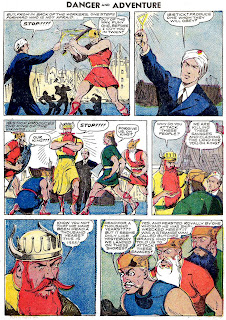 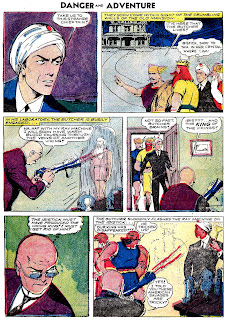 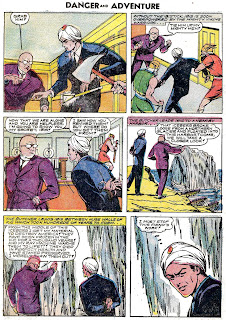 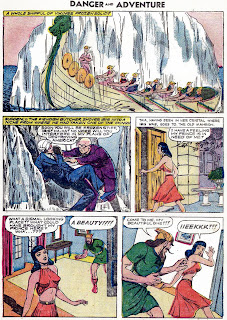 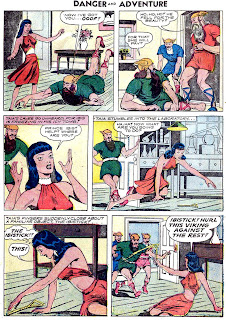 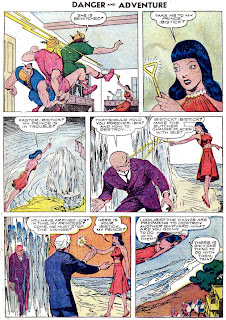 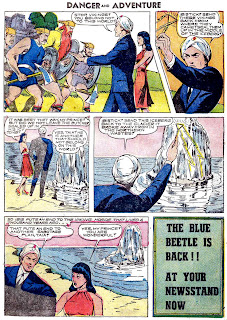 Our first trip to the moon would have been very different if Buzz Aldrin would have remember to bring his smoking pipe and moderate pumps!

BTW: Cover artist, I don't know what you used for reference -- or if it's a stat -- but the earth doesn't have lines on it!

Sure the earth has lines in it, Brian. I used to see them all the time when I'd look at the giant globe in my classroom!

You notice how the earth was drawn before we had ever actually seen our own planet from space? It didn't have clouds, either.

Captain Midnight was actually owned and licensed by the corporation most famous for Ovaltine.

The television show, like the radio show, was originally a vehicle for getting people to watch Ovaltine advertisements. Later, the episodes were repackaged with the character renamed (to “Jet Jackson”) and the connection to Ovaltine severed.

(I don't remember enough of what I've seen — and perhaps never saw and heard enough in the first place — to sort-out how the story arcs of the radio show, serial movie, comic books, and television show differed or might be seen as an evolving whole.)

Daniel, I probably knew about the Captain Midnight/Ovaltine connection at some point but forgot. I remember when radio and television shows had one sponsor.

I remember the Jet Jackson reruns but don't remember anything specific about them, so they apparently weren't interesting to me. Even as a kid I had likes and dislikes, although in the fifties I probably watched every show on the television schedule at least once.

My brother Rob tells people, "My brother and I were raised in a government program to see if children could be raised solely by television, with no parental guidance whatsoever."

The original sponsor for the "Captain Midnight" radio show was Skelly Oil, and later Ovaltine took over, after ceasing its sponsorship of the "Little Orphan Annie" radio show. The Wander Co., Ovaltine's American manufacturer at the time (the milk additive's developer was Sandoz, the Swiss firm that also brought us LSD), bought the rights to Captain Midnight.
As with the "Annie" show, Ovaltine offered shake-up mugs and decoder badges on "Captain Midnight" (radio and TV).
In addition to the shows, the serial and comic book, there was also a Captain Midnight newspaper strip, signed "Jonwan."

rnigma, this is great. I just have to let my readers loose and do the important research for me!

Thanks for all that information. I appreciate it very much.

Sandoz developed the product, you say? Is Ovaltine still being sold? Perhaps I should sample it.

Yes, Ovaltine is still available at any store... it's now made by another Swiss institution, Nestle (which for decades made the competing Quik, now NesQuik).

Before marketing to American kids, Ovaltine brought the secret-club idea to British children with "The League of Ovaltineys," offering comics, code badges, etc. Because the ad-free BBC was Britain's only broadcaster then, the League's show was sent via Radio Luxembourg.

Atomic Kommie Comics has a nice summary of Captain Midnight at http://heroheroinehistory.blogspot.com/2010/06/clock-striking-12-signals-coming-of.html