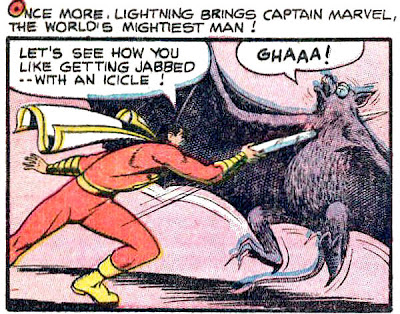 This is the final posting of our Fawcett week.

Captain Marvel's last adventure in Whiz Comics came in issue #155, cover dated June 1953. There would be more of Captain Marvel Adventures (the last issue, #150, had a cover date of November, 1953), but Whiz Comics, the Old Number One, the first comic book in a long string of comics under the “A Fawcett Publication” colophon, was finally cancelled. I'd like to know if the Captain Marvel comics were making money up until the Superman verdict. I assume they were.

By that time in 1953 horror was big in comics, and Fawcett's titles and covers reflected that. Whether the stories were genuinely horrible isn't the point, they were aiming at the monster crowd.

In his final Whiz, Captain Marvel faces the kraken, a monster out of classical mythology. 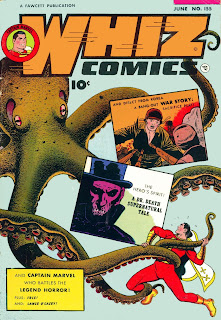 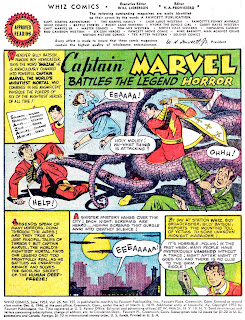 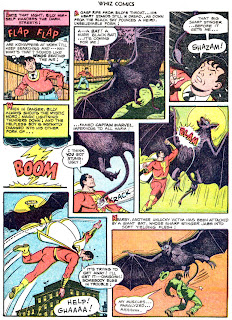 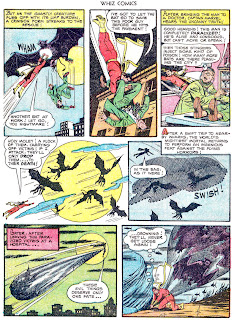 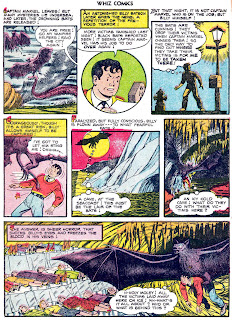 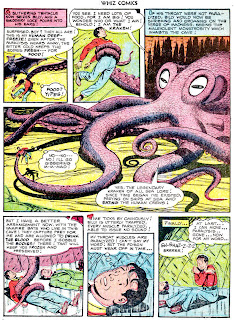 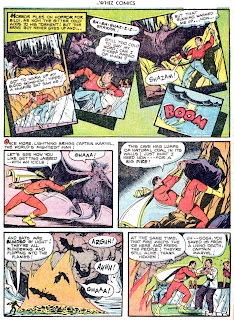 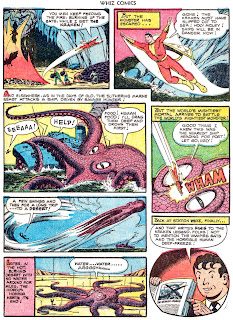 Of course they were making money, duh! Whey else did National sue them out of existence?

Fawcett produced some of the loveliest comics of their era, and their books never fail to bring a smile to my face. I absolutely treasure all of my Fawcetts, predominantly Marvel Family stuff, and mine are mostly very high grade and remain unslabbed so that I can enjoy them occasionally.

This was a great week, Pappy. Please give us another go round sometime, and thanks for the memories.

Chuck, I'll give you a pass on that “duh!” because I know we're pals. Despite my rhetorical question, my feeling is that Fawcett was making such good money on the Marvel Family group of comics that they were probably propping up the whole division. Otherwise why would they have fought DC over copyrights for more than a decade? I'm sure when they lost the lawsuit they looked at the ledger books and figured that without Captain Marvel and Company they might as well close down the comic book line, because they really had nothing that could make up the shortfall.

I'd love to do another Fawcett week sometimes. In the meantime I'll be spotting Fawcett stories as I always have.

Thanks for the note, Chuck, and congratulations to your son for graduating Air Force basic training.

Fawcett did not lose the lawsuit outright; they chose to settle after an appellate court nullified a ruling in their favor and sent the case base to the lower court.

Perhaps the shut-down was a way of mollifying DC and thus getting them to settle for less money. But the idea that the Marvel Family was a sort of keystone does have a lot of intuitive appeal.

Cool story, and a nice coincidence too, Pap... I just rode The Kraken rollercoaster at Sea World a few days ago! Oh my achin' backen!

I agree with your assessment over their ledger call (post-Big Red Cheese), publicly cbparts 48acknowledge that my "duh" was a humorous wink & nod, and thank you for Ian's congrats!

Daniel, choosing to settle means Fawcett may not have lost, but they gave up the fight, and your idea that shutting down the whole comic book line was a way of mollifying DC into accepting a lesser segment is an interesting thought. It was a labor intensive trial, as I understand each side had to go through old comics and clip panels where one character did something the other character did later. The legal bills, even in the forties and early fifties, would have been terrible. I believe in cutting losses when necessary, and I understand why Fawcett did it, but I also believe there's a chance the Marvel Family characters might have been around for many years longer had Fawcett not thrown in the towel to DC.

Getting the Fawcett comics off the stands would have been some sort of victory for DC, but there were still hundreds of titles crowding the racks, and Fawcett's comic book line would have made a small dent in the overall number of comics for sale.

I enjoyed the Marvel Family characters at first when DC began publishing them, after coming to some arrangement with Fawcett. As with most revivals of Golden Age characters after a point I didn't like what was being done with them.

Karswell, so the shakin' kraken was back-breakin'?

He was not an infringement on Superman.


I will create my own version.
Let's see if they sue. >:P