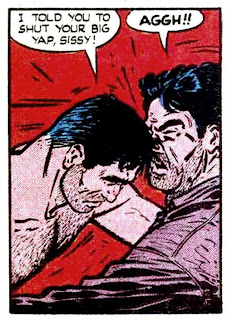 George Tuska was a longtime comic book journeyman, coming into the industry in its first days and working for several decades at his drawing board. He drew comic books, but in his career he also drew newspaper comic strips Scorchy Smith, Buck Rogers and World's Greatest Superheroes.

My personal preference for Tuska's art wasn't his superhero work, but his stories in comics like Crime Does Not Pay. "Butt Riley, King Of the Hoodlums" is from Crime Does Not Pay #48 (1947). (Butt gets his name from his style of fighting, and yeah, it's a funny name.) It presages the superhero stage of Tuska's later career by showcasing his ability to draw muscular figures in action. His anatomy—unlike the muscular monsters some of today's artists draw that pass for superheroes (my opinion)—looks to be correct. He gets to show off his skill because Butt Riley doesn't wear a shirt for the first four pages.

Crime Files #5* (1952) features another Tuska story. Grand Comics Database uses their famous ? to indicate they're not sure Tuska drew the story, but I'm sure. At least he penciled it; the inks appear to be by someone else. Tuska's strong sense of composition and storytelling stand out for me.

Tuska died in 2009 at age 93, his legacy assured by the thousands of comic book pages and comic strips he drew over his career. 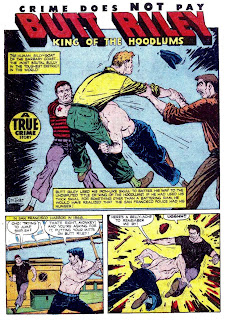 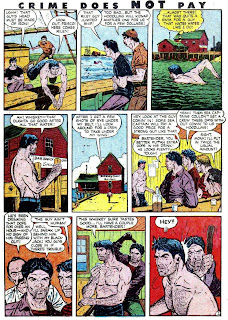 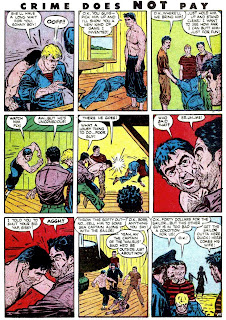 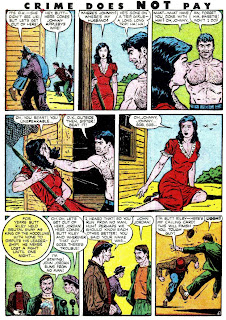 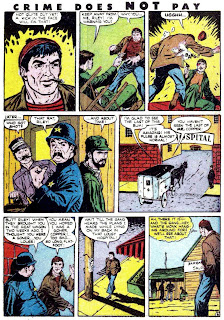 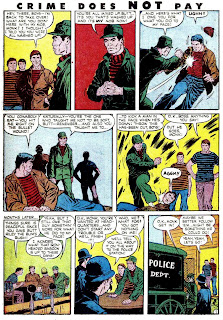 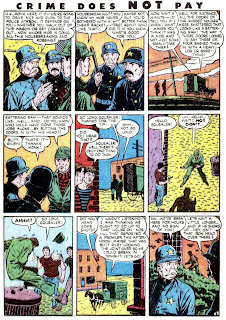 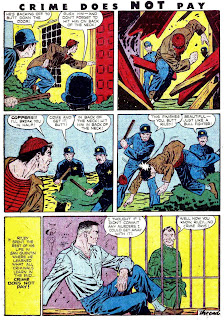 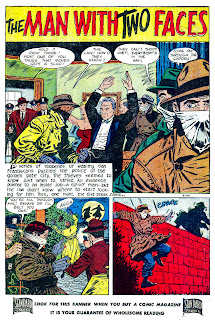 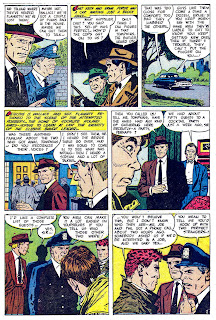 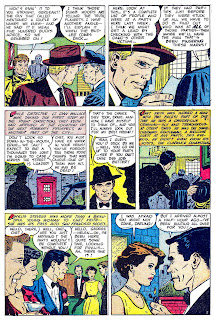 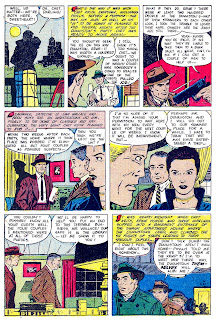 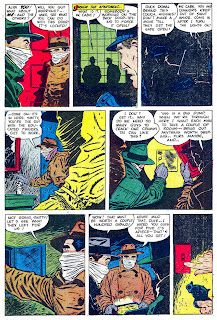 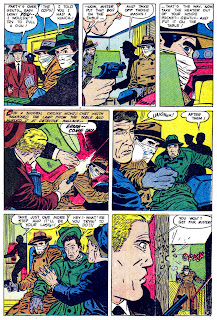 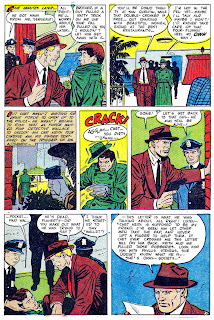 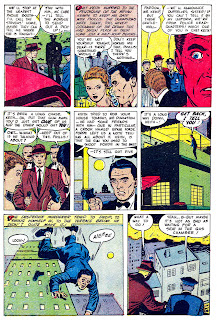 *Actually #1, if you remember I told you that Standard started all their titles with #5 to trick retailers into thinking they had a track record. 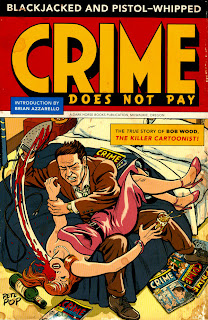 Crime did not pay for Bob Wood

On an August afternoon in 1970 I sat down with Otto Binder in his Chestertown, New York, home and talked over a wide range of subjects, but mostly about his work in the early comic books. It was a time when many of the early comic book men were still alive and able to share their memories; talking with Otto made for a very special afternoon for me. During the wide-ranging conversation Otto mentioned a particular incident with "...it was when Wally Wood's brother went to prison for killing his wife." It was the first I'd heard that, and it startled me. Otto quickly got off onto another conversational tack before I had a chance to ask him further questions. I found out later that Otto was mistaken, under a false impression.

It would be easy to be confused, even for someone in the business at the time, because I can think of four Woods from the Golden Age: Wallace, of course, Dick and Dave Wood, writers who were not related to Wally, but brothers who had scripted the newspaper strip, Sky Masters, which Wally Wood inked for Jack Kirby, and comic book editor/cartoonist Bob Wood. Bob was also not Wallace Wood's brother. I don't know if he was related to Dick and Dave.

And Bob Wood did not kill his wife, but a girlfriend, after an 11-day alcoholic binge in a New York hotel. The details, or what is now known of them from contemporary newspaper reports, is available in Blackjacked and Pistol-Whipped: Crime Does Not Pay. The article on Wood and his business partnership with Charles Biro, working for publisher Lev (Leverett) Gleason, and their infamous Crime Does Not Pay comics, takes only 11 pages of the 220+ page book. The rest of the volume is made up of excellent full color reprints of stories from that magazine. It's edited with an eye toward the more lurid and violent tales. There were many of those over the history of that groundbreaking comic book, but also many that aren't quite so over the top, as shown by the George Tuska story above.

It's a trade paperback, designed by Kitchen, Lind and Associates, for Dark Horse Comics. The book is available from the usual booksellers, affordably priced at $19.99.

I have a Claw story written and drawn by Bob Wood for Daredevil Comics coming up next Monday.
Posted by Pappy at 12:08 AM

I agree that the second issue is by Tuska. The inking is a bit light for him, which could be th influence of editor Mike Peppe or maybe, just maybe this is one of the stories where Pete Morisi helped him out.

I just ordered that book a few days ago, because outside of EC's stuff, I haven't read many pure crime comics (and even those were basically toned down horror stories).

It's been awhile since I've read SOTI or any of the other anti-comics works from the 50's, but I'm surprised they didn't make a big deal about Bob Wood in their crusades. Guess even scaremongers can show restraint.

So great to see the underrated Tuska get some love. Thanks, Pappy!

Every time I see the standard comic's pledge of "wholesome reading" on one of their crime comics I have to laugh ... except this one was rather wholesome compared to the usual fare! Almost melodramatic.

"Two Faces", page 6, last panel, honestly, is he firing paper bullets? They couldn't get through 1/4 inch frame (which seems to be floating in the air!) ... and would you want your eyes that close to the splinters from a bullet hitting wood?

100Aliases, the killing happened after the comic book flap, and a year into the Comics Code. There may have been some comments—there was a link to Wood and Crime Does Not Pay in the reprinted newspaper articles—but if Doc Wertham read them and thought, "Hey! I knew I was right!" I haven't seen a reference to it.

100Alias, Tamfos, Ger, Gumba...thanks for your pertinent comments, as always. I am in awe of your knowledge and powers of observation.

I must confess, I've never cared for Tuska. I was 12 in 1972 when I seriously got into comics. Tuska was one of my "Bottom 5", along with Don Heck, Dick Dillin, Dick Ayers, and Mike Sekowsky. (If one included Frank Robbins, and Bob Brown) one could increase it to 7.) I was gaga over Neal Adams; every other artist was measured on how closely they trimmed to his sails. Of course, in the last 40 years my tastes have changed. I like Dillin and Sekowsky's non-superhero work, and can appreciate Ayer's muscular storytelling when he's inked by someone overpowering, like Severin, or the plethora of strong inkers DC gave him when he migrated there in the 70's. I've never warmed to Heck, and enjoy Brown in only rare cases. I remain ambivalent about Tuska. I like his early, non-superhero work, but his work from the 60's on leaves me cold. Too big, too blocky. But (Butt) his work on the stories you posted today is quite nice. In my opinion.

Flaming Artist, thanks for your note.

I write a lot about journeymen comic artists, guys who were chained to their drawing boards for decades, and whose work showed up everywhere. Maybe they weren't fan favorites. You have guys on your list who weren't on my preferred list, either. I believe what every one of those artists had in common was speed, and they got their work in on time. Sometimes the artists the fans liked the most had problems with deadlines, and so there might be a fill-in issue using one of the old dependable journeymen, who could be counted on no matter what.