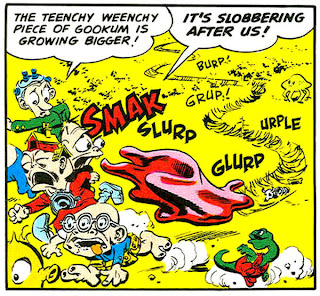 
I've heard the first couple of issues of Mad didn't exactly set the comic book buying world on fire. It took a couple more issues for that to happen, and eventually the comic book was selling a million copies an issue. "Blob" from issue #1, and "Gookum" from #2, both by Wood, didn't get the attention of his later strips, like "Superduperman." 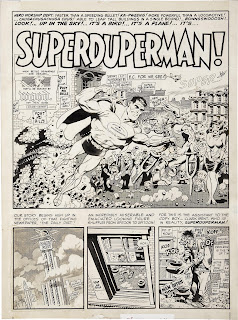 Above is the scan of the original art for the "Superduperman" splash page, and below the whole six-page "Gookum" for you to look at and admire. There's nothing wrong with "Gookum." The earliest issues of Mad were supposedly take-offs on the EC line, so Wood did science fiction stories and Davis did horror spoofs. It was when Mad started spoofing other comic books and television that readers found them.

I was too young to buy those issues of Mad from the stands, but my brother-in-law, Jim, was a high school kid at the time and said Mad was IT, the coolest comic ever. Even in the early '50s comic books were considered kid stuff, beneath the hep kats in high school, except for Mad.

I'm also showing the color version of "Gookum," which I scanned from the Tales Calculated To Drive You Mad Special #1, published in 1997. 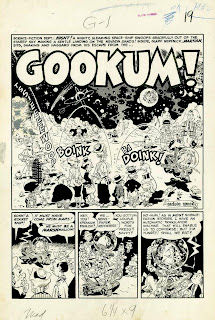 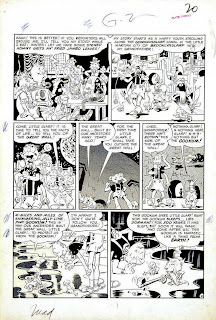 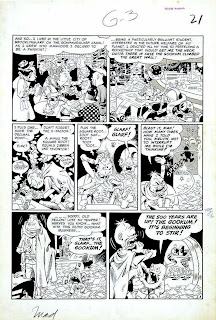 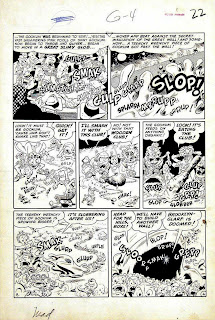 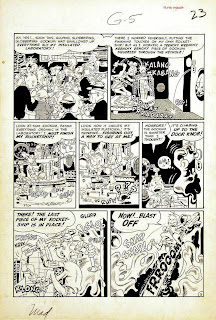 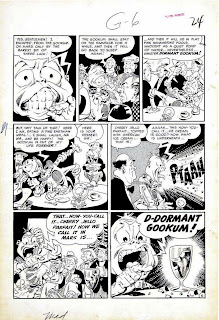 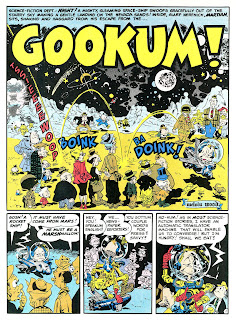 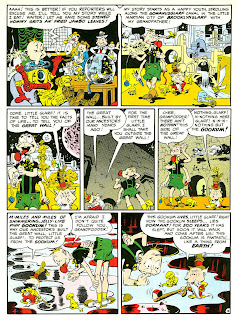 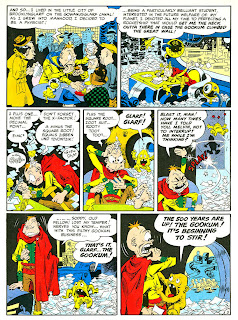 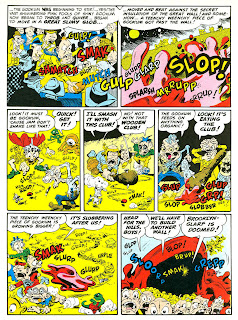 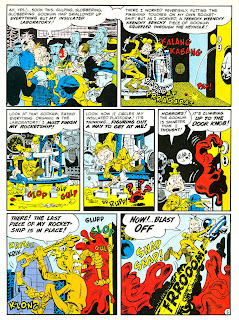 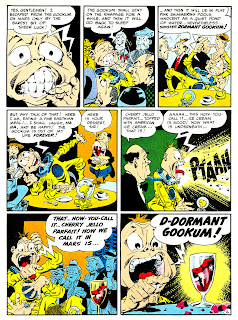 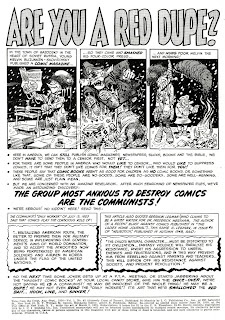 While we're on the subject of EC Comics, I came across this interesting reference to the infamous "Are You A Red Dupe?" ad that ran in EC's titles in mid-1954.

This letter, by T. Bernard Mathews of Reading, PA, was published in the Reading Eagle of May 19, 1954. What Mathews has done is quote directly from the "Red Dupe" ad. (He even perpetuated the misspelling of Wertham's name: it's not "Frederick," but Fredric). "After little reading," he claims early on in his letter. Yes, very little! One page, one ad out of a comic book. That's Bernard's research! I'm not saying the information in the EC page is incorrect, although it does seem a bit odd that they blunted their message with a Mad, or more correctly Panic (i.e., the comic poor Melvin printed is Panisky), satire of Russian censorship.

The ad got publisher William M. Gaines in even more trouble with the Senate committee he testified before. People in that era didn't have a sense of humor about being called red dupes.

I found the letter on the blog, Yesterday's Papers, an amazing site by John Adcock. I recommend it highly.
Posted by Pappy at 12:05 AM

If you're interested in pursuing a tangent, look into the biography of Gershon Legman. An decidedly unusual man.

First, there's nothing that can be said about Wood to do him justice, so I won't even try.

Second, from everything I've read, heard, etc, from Gaines, he seemed to be the nicest guy ever. If so, he might have also been a bit naive about how hateful the people aligned against him were.

He seemed to always love a goo joke or ribbing but you get the impression that he didn't realize how much fuel he kept throwing on the fire! Accusing the powerful people using the red scare to gain power as being communist themselves? Yikes!

The world is a better place for Gaines standing up to fight (and a worse place for all the great artists who lives were ruined, and I'm looking specifically at Ghastly), but Gaines seemed to instinctively push the exact wrong buttons every time!

Gaines deserves all the admiration he ever got, and more.

Those early issues may not have done so well, but they certainly made an impact on the few who did read them. I had an uncle who always referred to cold food he was served as "dormant gookum", and I wondered for years what that was all about until he gave me his old copies of Mad. The "bupgoo" joke from the Howdy Doody parody also became a running joke amongst us.

As for the reactions to that "Red Dupe" article, heh. Whenever I read those reactions, I just rest assured knowing how a lot of those people would show their true colors in just a few short years.

I agree with you that Gaines "might have been a bit naïve about how hateful the people aligned against him were."

Damned if he did, damned if he didn't. It's my understanding he volunteered to go before the committee, while other publishers headed for the tall timber, taking a low profile. Gaines blamed his poor performance on diet pills—bennies or benzedrine—but I believe he walked in there honestly thinking he could make his case, and the senators would shake his hand at the end of the testimony. He didn't reckon with the publicity-seeking committee. They were grandstanding. After all, what could they have really done? They might have hated comic books, but they couldn't rule them out of existence. There is such a thing as the first amendment. What was happening was coercion by marketplace. If distributors refused to put his comics on their racks—which they had the right to do—it was just as effective. So all enemies of the comics had to do was put the heat on the ancillary players like distributors and retailers and voila! they've shut the offending publishers down.

Those were tough times for free-thinking individuals. Gaines went on and made his fortune with Mad, but he always professed to have loved his comic book days...and that was even though he'd first balked at taking over the helm at EC after his father died. After the senate hearing I wouldn't doubt he wondered why he didn't go into teaching instead of publishing, but it all worked out, and Gaines actually saw society change before his death. What he had done in the '50s became really cool! Too bad during his darkest days he couldn't have looked ahead a few decades and seen it.

BUT...consider this, also. Would those horror comics seem so cool without the hew and cry they created in their time? Perhaps if no one had said anything they would have just gone away as the public tired of them, been replaced by other genres, and maybe we would have had Marvel Comics anyway, with or without the Comics Code. It's almost like a Harry Turtledove alternate history plot!

100Aliases, I'd heard gookum as a term before I saw it in Mad. Besides the racist term for an enemy Asian soldier to U.S. fighting men, "gook"—as defined in my American Heritage Dictionary—is a "dirty, slimy or sludgy substance."

Bupgoo is another matter. I'm pretty sure Kurtzman made it up, just like he made up "Gooky" as a candy bar in "Captain TVideo" in Mad.

"BUT...consider this, also. Would those horror comics seem so cool without the hew and cry they created in their time? Perhaps if no one had said anything they would have just gone away as the public tired of them, been replaced by other genres, and maybe we would have had Marvel Comics anyway, with or without the Comics Code. It's almost like a Harry Turtledove alternate history plot!"

Yeah, I wonder that many times myself. I *think* pre-code horror comics would have run their course, like every genre before it. The market place was just incredibly glutted with them and even the later EC output was starting to get a bit .. formulaic. You can image a lot of the stuff from the other publishers!

The most ludicrous bit out of all that was the CCA and "Judgement Day." It'd be laughable if not so depressing.

"...and in this way prevent him from rebelling against parents and teachers."

Oh, so that's what pre-code comic books were supposed to do? In that case you'd have to blame that pointyheaded intellectual Frederick Wertham for the 1960s counterculture. After all, it's his fault they were toned down.

Actually, I thought the ad was pretty clever. And that Bernard Matthews wanted to pass the information contained within as his own research is almost as funny as anything that's ever appeared in Mad.

I always wondered about the slang Mad loved to use, like "potrzebie" (which appears to be Polish) and "furschlugginer" (probably from "verschlagen"?)... anyway, I had heard that the term "gook" that was used against Koreans and Vietnamese was shortened from "Hankook," the Korean word for Korea.

"First, there's nothing that can be said about Wood to do him justice, so I won't even try."

Indeed. Every time I see his work - especially images of his original art - I'm speechless. The man was an incredible talent and flexible in nearly any genre, huh!

Thanks for this great post, Pap. I've not yet seen Gookum!

Gumba, My alternate history would have been to collect a few horror comics when I was young, see what they were about, then drop them and move on to other things.

My mother hated horror comics and Mad and I believe she (and my obsessive-compulsive disorder) created a need to have and read these comic books. I often wonder if she'd left it alone, not scream that I was going to turn into a murderer and die in the electric chair because I read such comics, if I would have the lifelong interest in them that I have. After all, if your parents hate it it's gotta be great, right?

I sure read a lot of comic books and did not grow up to be a criminal or murderer. I wonder if I disappointed my mother in that respect...?

Kirk, yup, that was Davis.

Nowadays we'd call Mr. Mathews a plagiarist, although I think he was just trying to spread the faith.

rnigma, "potrzebie" was clipped out of a Polish newspaper, if I recall Kurtzman's own recollection. Farshimmelt and furshluginer were Yiddish, and spelled phonetically. If you see them in other works they might be spelled differently. I don't remember what they mean. I think many people who grew up in middle America, as I did, in a white bread culture of "Leave It To Beaver" and "Father Knows Best" were floored by coming across these words and this type of humor. It created an instant brotherhood of people who knew you read Mad if you used the word "potrzebie."

HEH, ol' bwah...I can probably say that "Superduperman" affected me instantly. I was in a grocery store with my mom in 1956, thumbing through paperback books when I found The Mad Reader. Turning to that splash panel with its incredible detail, turning my image of Superman on its ear...wow. You might say that Wally Wood had an instant impact on my life. I still look at that splash panel with admiration and awe.

Great recollection, Pappy. in the mid-70's my best friend introduced me to MAD via his older brother.
Wally Wood and Will Elder's style immediately imprinted on my brain. It wasn't super hero style and honestly, I didn't realize I was impressed at the time, but boy did the pictures leave me with a new impression of comic illustrations.
Thanks again for posting Gookum!